Blake, Palmer, Linnell and Co. is a very handsome work, full of valuable new information. It is the product of family enthusiasm—David Linnell is the great-grandson of John Linnell—making energetic use of the vast archive of papers preserved by his kinswoman Joan Linnell Ivimy, to whom the work is appropriately dedicated. The absence of indication as to the sources of specific information makes it exceedingly difficult to follow David Linnell’s footsteps and to evaluate his accuracy, but, as one who has been through this archive repeatedly myself, I can say confidently that he has displayed an enormous mass of matter quite unknown before. If Linnell’s press has not been quite so bad during the last half century as the book’s publicity materials would have us believe,1↤ 1 “For the first time Linnell’s side of the relationship with Blake and Palmer is examined”—the miniscule “Bibliography” in the book does not indicate that David Linnell has examined very extensively what has been written about them. it is certainly true that the portrait of Linnell presented here is both judicious and altogether more amiable than was previously easy to see.

For one thing, there is a consistent vein of humor in Linnell which is not usually remarked in the context of his serious son-in-law Samuel Palmer. For instance, in 1809 a gentleman offered through an intermediary to buy a painting by the 21-year-old artist if he would cut off a strip four inches wide on each side of it, and Linnell replied: “‘pray does the gentleman wish to have the outside pieces or the inside,’ for I doubted which would be worth most” (16).

For another, the relationship between Linnell and Palmer shown here is consistently, and rightly, much more creditable to Linnell than one sees in accounts of the currently much more fashionable Samuel Palmer. Linnell fostered and supported the work of all his children and their spouses to an extraordinay extent. The title, Blake, Palmer, Linnell and Co., is of course designed to attract readers interested chiefly in Blake and Palmer, but the book has a great deal to say not only about Blake and Palmer (though much of this is already in print) but also about “Linnell and Co.” For 40 years, Linnell was one of the most successful and prosperous artists in England, frequently being paid £1,000 for a single painting, the price of a modest house. He used his success systematically to foster the careers of his children—“Of his nine children James, William, Thomas, Sarah, Polly and Lizzy all exhibited” paintings (281) and others also painted seriously—and Linnell insisted that customers who came to his house to see his pictures should consider those by his children and Samuel Palmer as well, and sometimes, at the request of the purchaser, he touched up his family’s pictures to make them more vendible. He was an exceedingly generous man, as Blake knew intimately.

One of the bonds between Linnell and Blake was their deep religious feelings, which may have been quite similar. David Linnell shows Linnell’s lifelong search for a religious context beyond the priestcraft of the Established Church. In 1812 he joined the Baptist Church in Keppel Street, whose Treasurer was the learned Thomas Palmer (his future father-in-law), but he was later excluded from the Church for heterodoxy (26-27, 122-23). Later he considered joining the Quakers, partly so that he could claim their privilege of declining to swear on oath in court, but his insistence on “the privilege of judging for myself” alienated the Quakers as well (124-25). He insisted that both his own marriage and his daughter’s should be merely civil, not religious (45), and David Linnell claims, without alluding to evidence, that “Linnell himself did not attend the funeral” of Blake because it was conducted with a Church of England service (110).

Literary scholars tend to assume that Linnell was a successful artist who is chiefly notable for his patronage of William Blake; had it not been for Linnell, Blake’s engravings for Job and his splendid drawings and engravings for Dante would not have existed. We tend to forget that Linnell was a very fine painter and engraver who taught Blake a good deal. His early successes were chiefly in portrait painting and engraving, and some admirable examples are reproduced, such as the oil of Blake’s patroness “Lady Torrens & Her Children.” The portrait sketches too are often remarkably skillful, such as the one of Mrs. George Stephen (illus. 1), whose husband bought one of the early sets of Job proofs. His later landscapes, for which he was justly famous in his time, are sometimes wonderful, with superb effects of sky—a formula which eventually became somewhat repetitive. The aureate “Evening—Vicinity of a Farm” with a herdsman driving cattle towards a thatched cottage evidently shows a scene which Blake may have seen whenever he visited the Linnells at Hampstead. Blake was in very good, nay, distinguished company indeed. 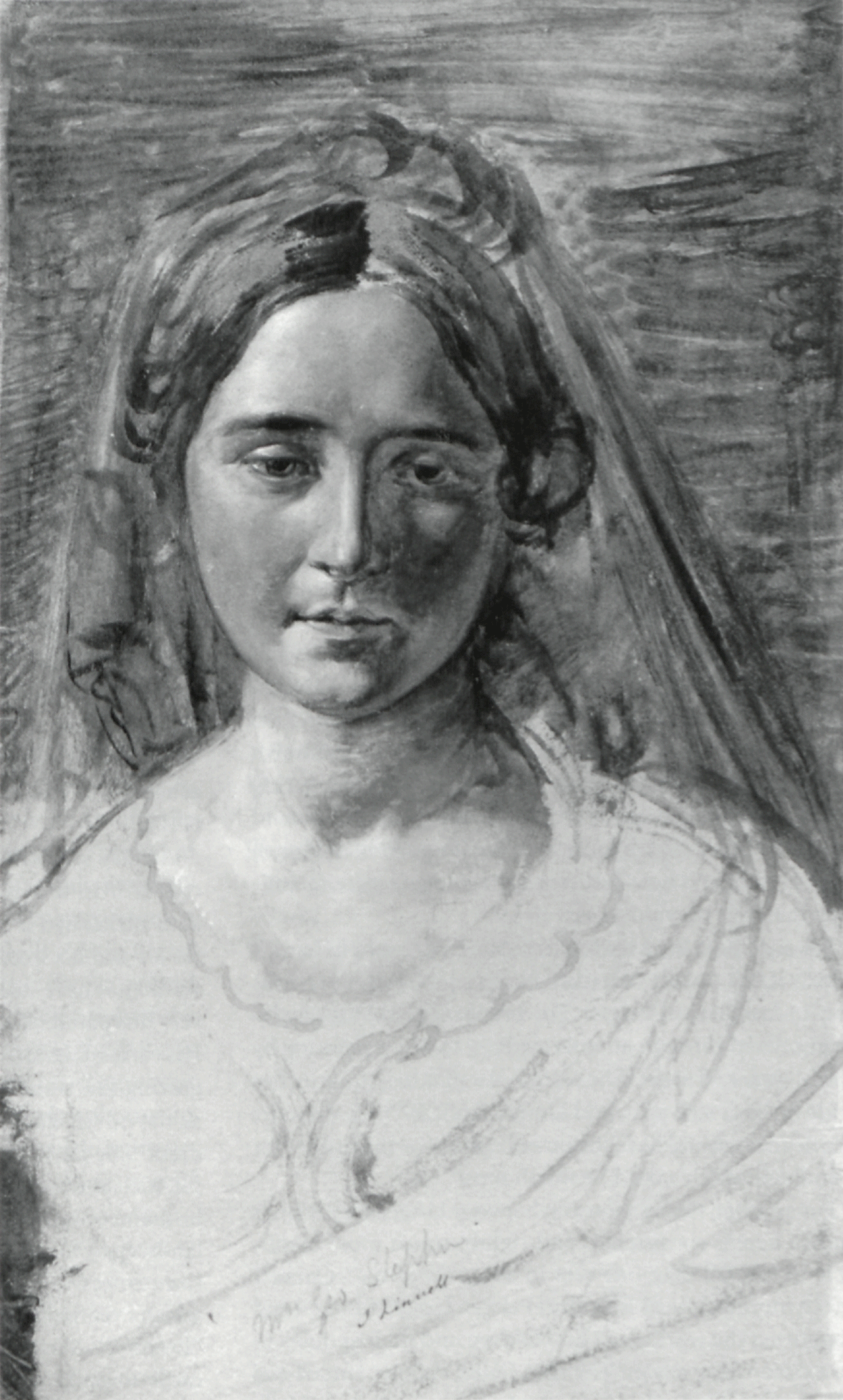 Notice the extraordinary length of time during which Linnell was exhibiting—75 years—and the enormous number of finished pictures recorded—over a thousand. This is a prodigious career.

Two entries about Blake from the Ivimy MSS are given here for the first time:

(1) Linnell wrote to his wife Mary on 6 February 1826 asking her to “obtain all the particulars you can respecting the printing of Job” (100).

(2) After Catherine Blake’s death, when Tatham was trying to gain possession of Blake’s Dante drawings (1 March 1833) which Linnell had commissioned and paid for, Linnell’s father-in-law Thomas Palmer, a coal-and book-merchant, wrote to Linnell on 22 March 1833 about trying to find Catherine Blake’s will:

My dear Mr Linnell,
I spent the greater part of three hours today, at Doctors Commons, searching the Books; and there appears no account of either Mr or Mrs Blake’s effects having been administered to at all. I was not satisfied by examining for the Will of the latter in 1831 but I also went through 1832, supposing it possible that, as she died so late in the year 1831 as the 18th of October the administration might have been neglected, or deferred, to the full length of the time allowed, which, I believe, is Six Months from the decease of the party; but there is no trace of any Will or Administration. . . . I am afraid everything is not as it should be relative to the disposal of the estates of Mr and Mrs Blake; but I suppose that must be left, unless any further steps should be taken to annoy you. [147-48]

We had previously known that no will for either William or Catherine Blake was ever proved, but we had not known that Linnell sought the information. He was a careful businessman who did not take chances when it came to the management of his property.

Blake, Palmer, Linnell and Co. is useful on Blake and Palmer, though not so novel as its publisher imagines, and on Linnell and his family it introduces a great deal of new information—and reproduces some beautiful and too-little-known pictures. We have much to thank David Linnell for, particularly the reminder of what a very fine artist and generous man his great-grandfather was.