A Blake Drawing Rediscovered and Redated

William Michael Rossetti’s “Annotated Lists of Blake’s Paintings, Drawings and Engravings,” added as an appendix to Alexander Gilchrist’s The Life of William Blake, 1863, and revised for the second edition of 1880, are invaluable in listing Blake’s works when they were still in the hands of a relatively small number of owners, and in helping identify particular works through the almost naive specificality of some of his descriptions. However, unless the work is actually dated (and not even then in every case), Rossetti rarely gives any indication as to the period of a work, nor of its connection to any specific series of designs or set of illustrations. Remarks such as “A sketch for a design afterwards executed” is tantalizing to say the least (1863, p. 247, list 2, no. 78, and 1880, p. 266, list 2, no. 103; this drawing, listed as untraced in my catalogue, Martin Butlin, The Paintings and Drawings of William Blake, 1981, pp. 455-56, no. 610, has still not been identified). Hence it is not altogether unforgivable that the drawing entitled by Rossetti “The Last Trumpet” (illus. 1: see cover) should have been listed by me as a possible illustration to [Robert] Blair’s The Grave, “c. begin page 1 | ↑ back to top 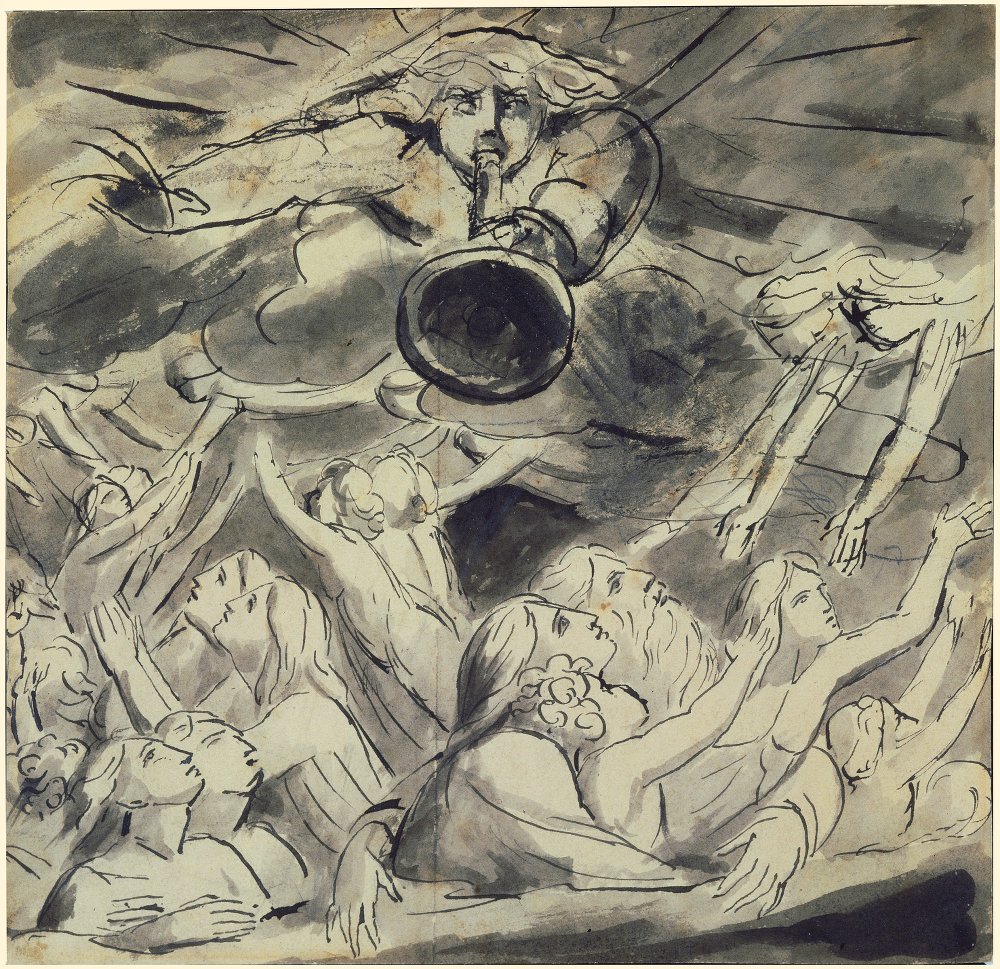 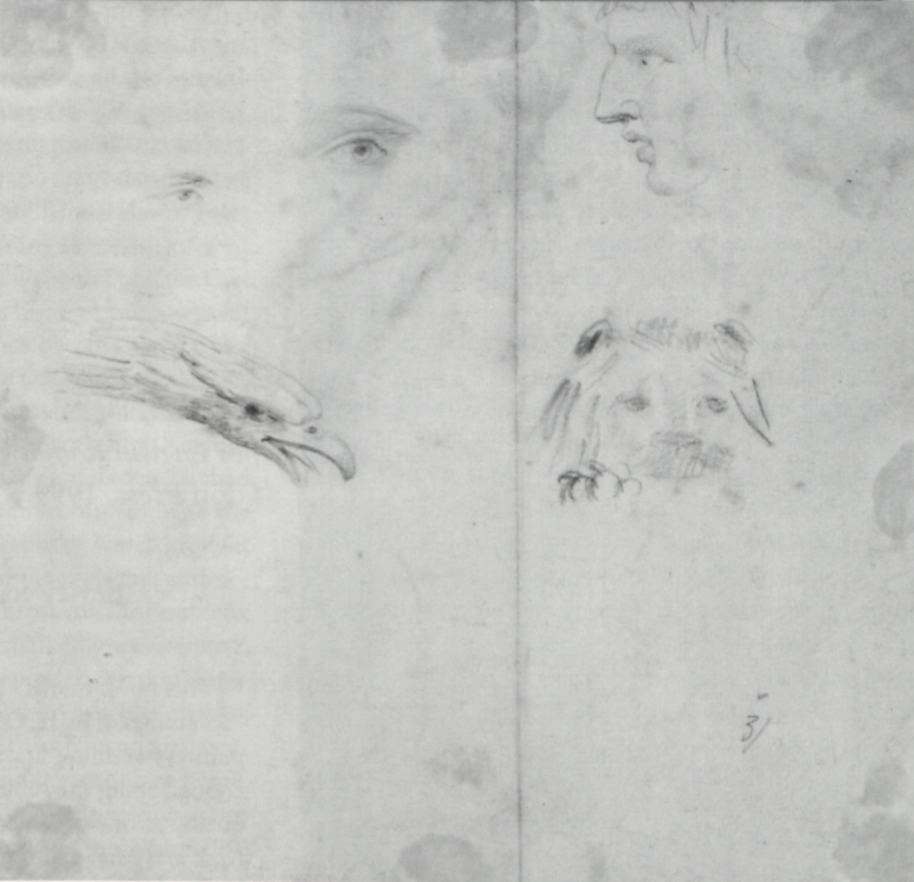 However, a comparison between the British Museum drawing and Rossetti’s description had already demonstrated that Robertson’s identification was incorrect, the most specific part of Rossetti’s description failing to be matched in the drawing: “An Angel in the upper mid-plane of the design is blowing the trumpet, the tube of which comes forward in a conspicuous way. Souls, chiefly of women and children, are rising from the earth, and received by angels” (Rossetti 1863, p. 248, list 2, no. 86, and 1880, p. 266, list 2, no. 112; Robertson 1907, p. 473, list 2, no. 86; emphasis mine). The trumpet in the British Museum drawing is unmistakably facing more or less directly downwards, but in the drawing here illustrated it does come forward in a conspicuous way.

This drawing, for sight and information of which I am indebted to Henry Wemyss of Sotheby’s, fits Rossetti’s description exactly and is clearly one of that large group of pen and wash drawings to be dated to the early 1780s; in particular, the heads of the resurrected souls are very close to those of Joseph’s brethren[e] in the drawing for the watercolor of Joseph Making Himself Known to His Brethren[e] exhibited at the Royal Academy in 1785 (see B 159 recto and verso; the finished work, in the Fitzwilliam Museum, Cambridge, is B 157). The drawing is probably, therefore, from late in the group, about 1785 and, as if in justification of my misidentification, may be linked in subject to two illustrations to The Grave not of 1805 but of c. 1780-85, The Counsellor, King, Warrior, Mother and Child (not in Rossetti; B 136, pl. 153) and the Burial Scene entitled by Rossetti “Young burying Narcissa (?)” and related by him to two lines from Night 3 (1863, list 2, no. 102, and 1880, list 2, no. 130; B 137 recto, pl. 154). In any case, it is one of the strongest of this group of early drawings and deserves more than Rossetti’s dismissive “A moderately good design, having no salient qualities of execution.”

The drawing is on a sheet of paper 8 1/16 by 8 ⅜ in. (20.4 × 21.2 cm) which has been folded slightly to the left of center. On the reverse (illus. 2) are a number of drawings, those which can be identified being probably related to Blake’s illustrations to William Hayley’s Ballads and in particular to the first edition of 1802-03 rather than to that of 1805. The agonized face in profile in the upper right-hand corner seems to be a sketch for the young man about to be saved from being eaten by a crocodile by the self sacrifice of his dog, used for the frontispiece to “The Dog” (David Bindman, begin page 24 | ↑ back to top The Complete Graphic Works of William Blake, 1978, pl. 396). The head of the eagle, center left, was presumably done in connection with the frontispiece, and less directly the headpiece, to “The Eagle” (Bindman pls. 390, 391). The lion, for such it seems to be, particularly on account of its large claws, in the center right is not directly related to the depiction of the lion in “The Lion” (Bindman pl. 393) but could well be a study. In the upper left-hand corner of the drawing there are two distinct studies for a human right eye which call to mind the child in Blake’s frontispiece to B. J. Malkin’s A Father’s Memoirs of His Child, 1806, though it is impossible to make any specific identification.

The basic information in my catalogue entry seems to be correct given a misdating of some 20 years, with the addition to the provenance of the drawing of Iolo Aneurin Williams, the well-known collector of English drawings and watercolors, about which he wrote an important book, Early English Water-Colours, and Some Cognate Drawings by Artists Born Not Later Than 1785, published by The Connoisseur in 1952.