After the publication of Alexander Gilchrist’s Life of William Blake in 1863, “Blake was,” in the words of G. E. Bentley, Jr., “immediately elevated from obscurity to fame and notoriety.”1↤ 1. G. E. Bentley, Jr., ed., William Blake: The Critical Heritage (London: Routledge and Kegan Paul, 1975) 11 (Introduction). It is no matter for surprise that henceforth numerous editions of his works started rolling off the presses, not only in England and America, but also on the Continent. The Marriage of Heaven and Hell, By William Blake, appeared in Maastricht, the Netherlands, in 1928, an edition that deserves some special attention, for it was brought out in a limited run designed for bibliophiles only. This note is meant to throw some light on the genesis of this remarkable publication.2↤ 2. Listed in G. E. Bentley, Jr., Blake Books: Annotated Catalogues of William Blake’s Writings (Oxford: Clarendon P, 1977) 303, and in George Watson, ed., The New Cambridge Bibliography of English Literature, vol. II (Cambridge: Cambridge UP, 1971) 624.

First a word on its publisher Alexandre Alphonse Marius Stols (illus. 1) is in place here, for he was a monument in the annals of notable publications of Dutch as well as of foreign belletristic works.3↤ 3. Among the many articles and books on Stols, see especially C. van Dijk, Alexandre A. M. Stols, 1900-1973, Uitgever en Typograaf: Een Documentatie (Zutphen: Walburg, 1992). Born in Maastricht in 1900 as the son of a printer and publisher, Stols was from an early age steeped in the world of book production which exerted a strong fascination over him. However, his father never wanted his son to succeed in the business, but instead sent him to the University of Amsterdam in 1919 to acquire a degree in law. In that lively city Stols was caught up in the maelstrom of intellectual and cultural life, commencing his lifelong acquaintance with writers, sculptors, painters, and actors. He also attended lectures on art history, paleography, philosophy, and Dutch and French literature. In 1923 he changed to the University of Leiden, where he graduated with a B.A. in law. Meanwhile, he had started printing and publishing his own works, which over the years included an extraordinary range of prominent Dutch and Flemish poets and novelists, many of them rising to prominence. Stols seems to have been endowed with an unusual flair for spotting genuine literary talent. From the very beginning of his publishing career Stols also catered for an international market, printing works by Paul Valéry, Shakespeare, Paul Claudel, Rainer Maria Rilke, André Gide, etc. His correspondence with writers and artists all over the world—more than 10,000 letters have been pre begin page 105 | ↑ back to top 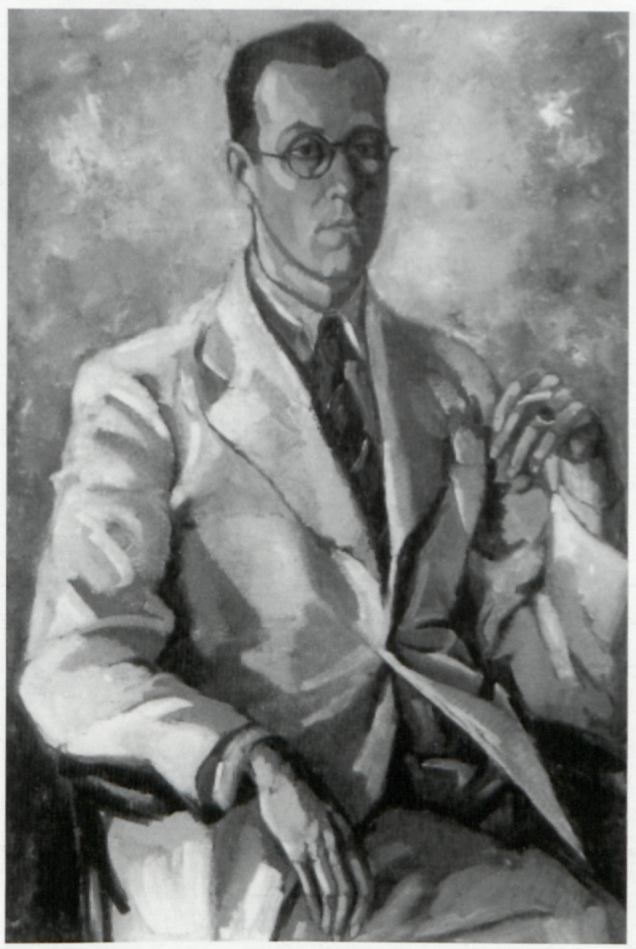 1. Portrait of A. A. M. Stols by Edmond Bellefroid (1938).   Courtesy of Stadsbibliotheek Antwerpen.
served—constitutes a rich mine of information on the changing climate of opinion in the former half of the past century. When he died in 1973, Stols had brought out more than 1,000 literary works of outstanding value. His biographer C. van Dijk describes him as “a man of not one outspoken talent or competence” but as a “mixture of intelligence, artistic-typographical capacity, linguistic knowledge, social adaptability, decency, conceitedness, unbusinesslikeness, feeling for quality, and the capacity of growing with his time.”4↤ 4. van Dijk, Stols 437. This and the subsequent translations from the Dutch are my own.

proposed to publish in Dutch, English, French, German and Italian books whose exceptional importance demands an adequate typographical execution. . . . It is hoped ere long to carry out the work with private materials entirely, but for the time being either Mr. J. van Krimpen’s new and particularly fine ‘Lutetia’ type will be used . . . or the old types of which the matrices belong to the world-famous typographical collection of Messrs. Joh. Enschedé en Zonen of Haarlem. Advantage will be taken, too, of copies of old types such as modern art has learnt to produce so well. Similarly, it is intended that the Halcyon publications shall ere long be printed on specially made paper bearing the watermark of the Press. Until this can be done use will generally be made of the various makes of antique paper handmade after old Dutch methods. Title-designs and initials shall give to text and page their full measure of beauty.

Jan van Krimpen (1892-1951) was probably the most distinguished typographer and calligrapher of the twentieth century in the Netherlands, who was also much in demand internationally, especially in Britain, France, and America.6↤ 6. On van Krimpen, see John Dreyfus, The Work of Jan van Krimpen: An Illustrated Record (Haarlem: Joh. Enschedé en Zonen, 1952). He had created and cast the Lutetia Roman letter, called after the old name for Paris, for the catalogue of L’Art Hollandais à l’Exposition Internationale des Arts Décoratifs et Industriels Moderns, an exhibition held in Paris in 1925. This new letter, for which he was awarded the Grand Prix by the French organizers of the exhibition, caused quite a stir among contemporary typographers. An anonymous contributor to The Fleuron: A Journal of Typography wrote that the Lutetia “created something of a sensation, not only for its singular beauty and clarity of form, but because the face was in no recognizable way purloined from ancient times but instead rose freshly from the reasoned canons of type design.”7↤ 7. The Fleuron: A Journal of Typography 6 (1928): 215. Bruce Rogers described the Lutetia as having “strength with delicacy, grace with dignity”;8↤ 8. Quoted by Dreyfus, van Krimpen 23. A. van der Boom styled it “a letter of noble pomp and full of distinguished grace”;9↤ 9. “De Letter ‘Lutetia’, Ontworpen door J. van Krimpen voor de Firma Joh. Enschedé en Zonen te Haarlem,” Elsevier’s Geïllustreerd Maandschrift, vol. 35 (1925) 152. and Stols himself wrote that the new letter was “the result of labor and of a study of the good old-national Italian and French letters . . . it has a fresh, original cachet . . . it can be used for every good work.”10↤ 10. “De Letter ‘Lutetia’ van J. van Krimpen.” De Witte Mier 3 (1926): 84. The house Enschedé and Sons of Haarlem, for which van Krimpen worked, was founded at the beginning of the eighteenth century and soon emerged as one of the most famous Dutch printing businesses and especially typefounders the Netherlands has ever witnessed.11↤ 11. See Jan van Krimpen, Het Huis Enschedé: 1703-1953 (Haarlem: Joh. Enschedé en Zonen, 1953). begin page 106 | ↑ back to top 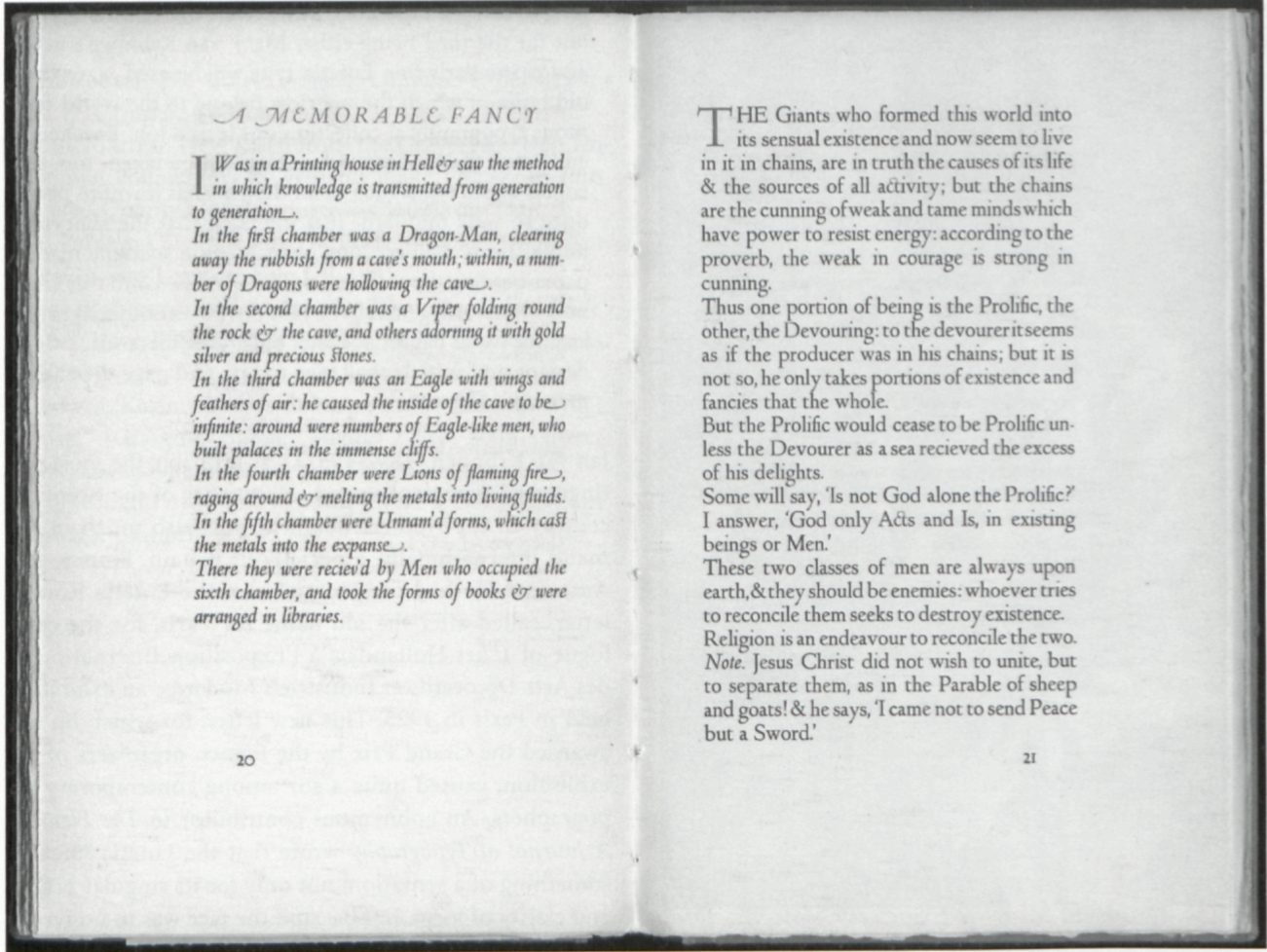 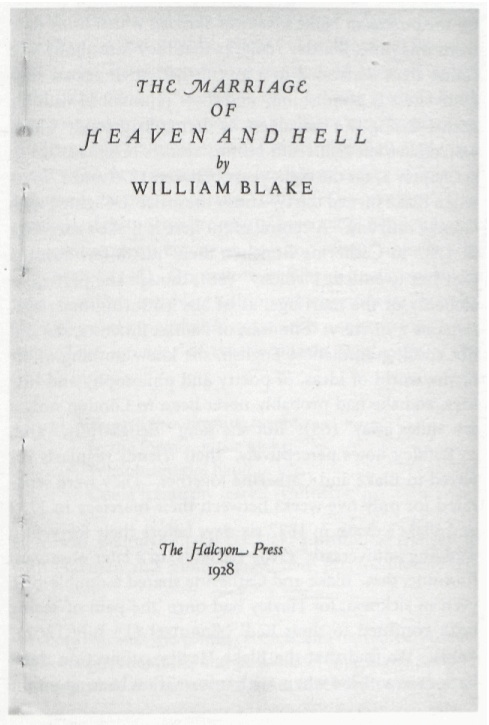 2-3. Text (above) and title page (below) of The Marriage of Heaven and Hell by William Blake (Maastricht: Halycon Press, 1928).   Courtesy of Koninklijke Bibliotheek,[e] The Hague.

The Halcyon Press was to publish limited editions only, chiefly aimed at an international market, for fanciers of exclusive works were exceptional in Holland at the time. In the year of the foundation of this distinguished, if expensive, bibliophile series Stols published his first English work, Odes by John Keats, in a dual language edition of 125 copies featuring Keats’s six famous odes. The following year, 1928, the Halcyon Press brought out The Marriage of Heaven and Hell, by William Blake (illus. 2-3) in a run of 325 copies on Pannekoek Antique paper, printed by Joh. Enschedé en Zonen, using van Krimpen’s Lutetia Roman and Italic with caps in red for the initials. They were bound in limp parchment with the title on the spine and the printer’s mark on the upper cover in gold, or in quarter buckram. The editorship was entrusted to P. N. van Eyck (1887-1954), a prominent Dutch poet and journalist, who later became professor of Dutch literature at the University of Leiden. Although Stols had hinted that he had drawn van Eyck’s attention to André Gide’s French translation of The Marriage of Heaven and Hell, published first in the 1922 issue of the Nouvelle Revue Française and separately reprinted in 1923 by Claude Aveline, Stols’s French agent in Paris, it was probably van Eyck himself who had spurred Stols to publish Blake’s work. In a letter to Stols, dated 12 September 1927, van Eyck, residing in London as a foreign correspondent, focused on Max Lowman’s facsimile edition of Blake’s Marriage of Heaven and Hell, published in 1927 by J. M. Dent, and from the many books on Blake in van Eyck’s library we know that ever since 1925 he had been engrossed in the English poet.12↤ 12. See S. A. J. van Faassen, “Een Weldoordacht Uitgaafje,” Optima 6 (1988-89): 310. I am much indebted to this article for information concerning the relationship between Stols, van Eyck, and van Krimpen.

Apparently the preparatory work for the text and typography of Stols’s The Marriage of Heaven and Hell entailed some serious difficulties. Stols spoke of “a vehement quarrel” between van Eyck and van Krimpen because begin page 107 | ↑ back to top ↤ 13. “Chronological List of the English Publications of The Halcyon Press, 1927-1934,” The Private Library 5 (1972): 76.

The publisher had left the typography entirely in Van Eyck’s hands—considering him deservedly as an experienced private printer—but had not reckoned with Van Krimpen’s touchiness. It appeared that the latter did not suffer interference with typographic design in ‘his’ department . . . . It became a question of ‘give and take.’13

Whatever the differences of opinion between van Eyck and van Krimpen concerning the typography, The Marriage of Heaven and Hell was printed as a brilliant example of their superior craftsmanship and therefore must be seen as a fine tribute to Blake’s genius. Regrettably, I have been unable to trace any critical English and Dutch response to this splendid publication. But that Stols scored a success with his Halcyon Press’s publications in English appears from the fact that he continued to bring out such exclusive English works, including Dante Gabriel Rossetti’s Hand and Soul (1928), Milton’s The Sonnets, Both English and Italian (1929), Keats’s The Collected Sonnets (1930), Lord Byron’s Lyrical Poems (1933), etc.