In December 1993 I acquired a leaf of pencil sketches by Blake titled A Pastoral Figure and Other Sketches (illus. 1).1↤ 1. Number 81, recto only, in Martin Butlin, The Paintings and Drawings of William Blake (New Haven: Yale UP, 1981), hereafter cited as “Butlin” followed by entry number. Butlin describes the paper as “grey,” but cleaning the sheet revealed it to be a typical off-white eighteenth-century paper. The drawing was for many years in the collection of W. Graham Robertson and appeared as lot 74 (with 2 other works) in the legendary auction of his Blake collection at Christie’s in London, 22 July 1949. After passing through the hands of at least two dealers, the sheet of studies was acquired by the American librarian and bibliographer Edwin Wolf 2nd. After his death in 1991, the drawing was inherited by one of his sons, who placed it for sale with the dealer Nicholas W. Lott, from whom I purchased the leaf. Lott told me that he had removed the badly stained drawing from its old, acidic mat and found more pencil sketches on the verso. Several of these were almost invisible before I cleaned the leaf. The purpose of this brief essay is to reproduce the heretofore unpublished verso sketches (illus. 2), describe them, and suggest some ways they can be situated within Blake’s career as an artist and poet.

The recto drawings, to which the verso sketches are related, are dominated by a young male seated under a tree. A wavy line below his feet might be the bank of a stream; behind the man and to the right is a distant mountain. He appears to be nude except for a cloak visible below and to the left of his right elbow, a line at his left wrist that suggests a cuff, and the gently curving lines defining his left upper-arm that hint at a cloth sleeve. The diagonal line across his chest may be a string holding the cloak. His posture, with his left hand raised to his face, vaguely hints at one of the traditional pathos formulae for melancholy. However, a loop about 1 cm. above this hand, and the shape of the hand itself, suggest that there may be something—possibly a staff with a knob at its upper termination—held in his left hand. All but the top of the staff is either left unexecuted or hidden behind the man. The most significant object, however, is the light outline of a lyre held by the figure’s right hand and extending between his legs. He is not only a “pastoral figure,” as the title indicates, but a musician/poet. Five versions of this figure, one of whom is clearly holding a staff, appear on the verso of Blake’s Job, His Wife and His Friends: The Complaint of Job, since 1940 in the Tate Collection (Butlin #162 verso, dated to c. 1785). Four of these figures, like the main figure on the recto of A Pastoral Figure and Other Sketches, appear to be nude or only partly clothed. The largest figure, however, bears an arc below his neck that indicates a shirt or gown. Blake was clearly interested in developing the representation of a pastoral lyricist in the mid-1780s.

The remaining figures on the recto include two versions of a recumbent male, perhaps wearing a brimless hat, sideways along the right margin; a third version of this same figure, sideways near the left margin; and two standing figures (the lower barely indicated), sideways above the bottom margin. The most interesting of the smaller sketches is once again a seated figure, upside down just above the bottom margin. He holds a large, triangular harp of the sort associated with the bard, not the lyric poet.

Several of the previously unpublished verso sketches (illus. 2) continue themes and types known from the recto. All the verso drawings were probably executed at about the same time as the recto images, in the early- to mid-1780s.2↤ 2. I suspect that Butlin’s dating of the recto to c. 1785 represents the upper end of the date range. Of the three largest figures, the one on the left would appear to be a side view of the pastoral figure dominating the recto. He sits under a tree and may be holding a lyre on his lap. The lightly sketched lines inhibit a clear identification of other features. The next, more darkly drawn figure to the right is gowned. The wide strap extending diagonally across his chest and left hip recalls the slenderer string over the chest of the major figure on the recto. He holds two objects, possibly the upper reaches of a triangular harp in the right hand and a staff in the left. The rightmost major figure is a further development of the central standing figure. He is similarly gowned, wears a cape that extends below the back of his legs, and now holds the large harp in both hands. He is probably playing the instrument. Some lightly drawn vertical lines right of his left shoulder may be the trunks of trees or the columns of a portico; a wavy line below his feet and three verticals right of his left leg also hint at a landscape.

Motifs evocative of the lyric/pastoral on the one hand, and the bardic/epic on the other, are the most significant images on both recto and verso. The former recalls the classical inheritance of eighteenth-century poetry. The latter might suggest the Homeric epic, but the decidedly non-Greek shape of the harp implies a nativist British tradition harkening back to the Welsh bards and Ossian.3↤ 3. John Flaxman’s first outline design to the Iliad pictures the Greek harp, or cithara, traditionally associated with classical epic. See The Iliad of Homer Engraved by Thomas Piroli from the Compositions of John Flaxman Sculptor (Rome: [Piroli], 1793). For some of Blake’s major pictures of the large triangular Celtic or Welsh harp, see his illustrations to Thomas Gray’s “The Bard” (Butlin #335.53) and “The Triumphs of Owen” (Butlin #335.89), and the tempera painting and recto/verso drawings of The Bard, from Gray (Butlin #655-56). Homer holds a large lyre in Blake’s first design to Gray’s “The Progress of Poesy” (Butlin #335.41). In Ireland, Scotland, and Wales, the Celtic harp became a symbol of national independence in the late eighteenth century; see Katie Trumpener, Bardic Nationalism (Princeton: Princeton UP, 1997) 3-34. For Blake’s possible allusions to the Irish harp and its attendant politics in Jerusalem, see Catherine L. McClenahan, “Blake’s Erin, the United Irish, and ‘Sexual Machines,’” in Prophetic Character: Essays on William Blake in Honor of John E. Grant, ed. Alexander Gourlay (West Cornwall, CT: Locust Hill P, 2002) 165-67. These two genres and their begin page 45 | ↑ back to top 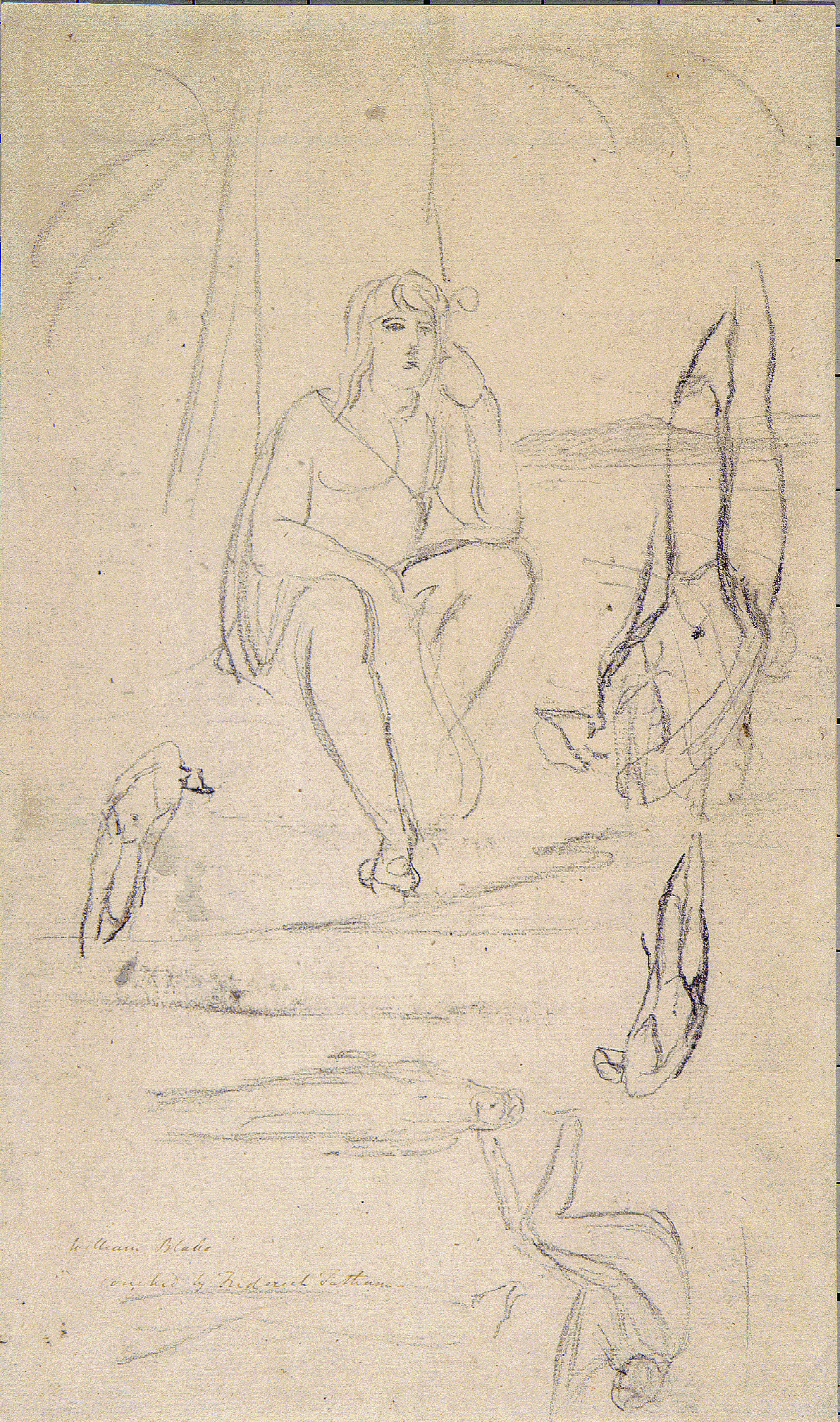 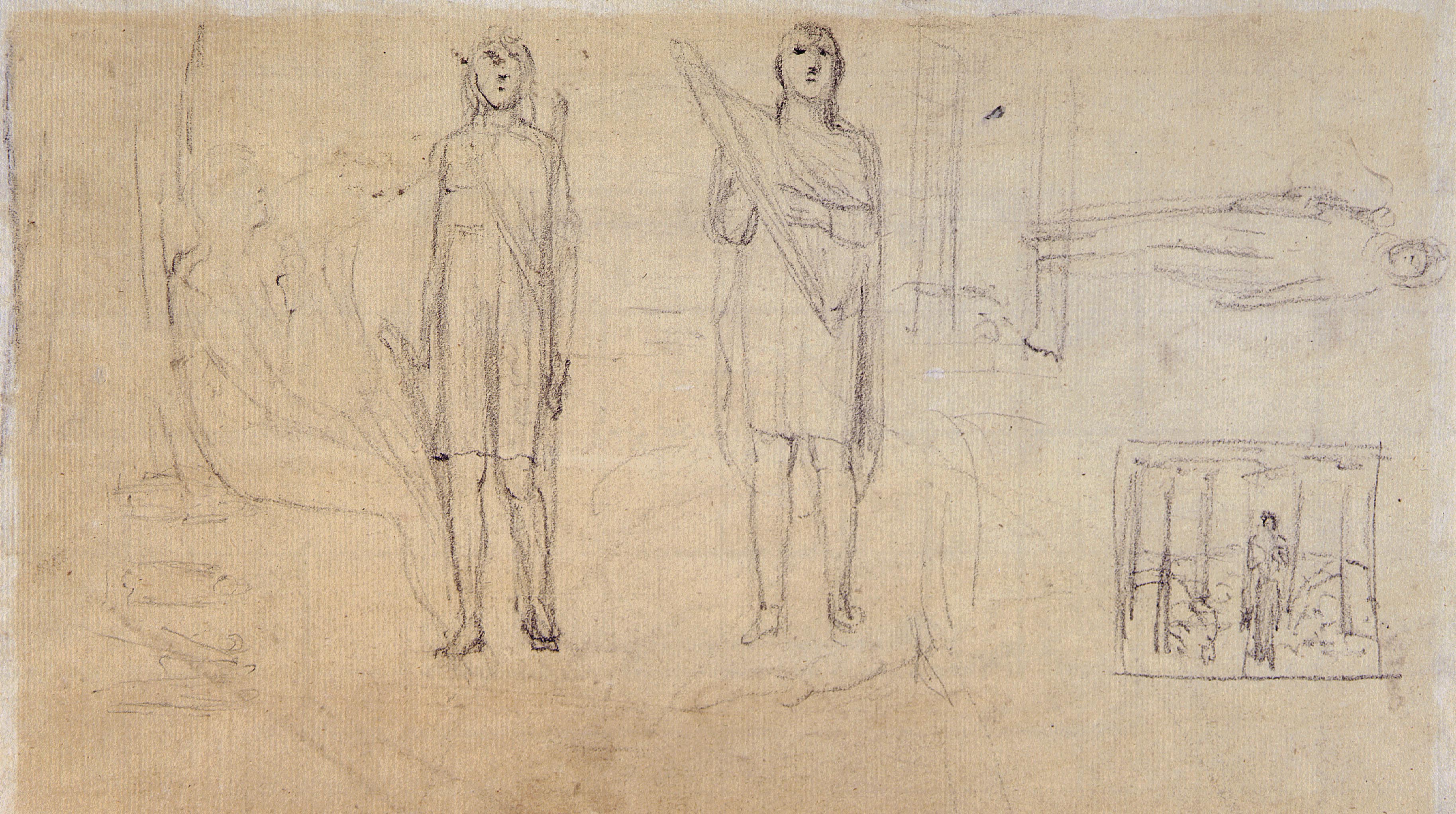 2. A Pastoral Figure and Other Sketches, verso drawings in pencil.   See illus. 1 for details. Not previously published.
begin page 47 | ↑ back to top attendant cultural associations also resonate through Blake’s earliest poems, published as Poetical Sketches in 1783. He laments the attenuated state of both traditions. “The shepherd leaves his mellow pipe” in “Gwin, King of Norway,” while “the languid strings do scarcely move” for the “bards of old” in “To the Muses.”4↤ 4. The Complete Poetry and Prose of William Blake, ed. David V. Erdman, newly revised edition (New York: Doubleday, 1988) 417-18, hereafter cited as “E” followed by page number. According to the prefatory “Advertisement” to Poetical Sketches (E 846), the poems were composed well before 1783, roughly 1770-78. Here and elsewhere in Blake’s poems and designs, the shepherd’s pipe is a more common motif than the lyre, but carries much the same meaning. The specifically British associations of the harp are indicated in “A War Song to Englishmen,” in which King “Alfred shall smile, and make his harp rejoice” (E 440). Songs of Innocence, etched and first printed in 1789, also indicates the complementary differences between pastoral musician and bard. The “Introduction” to the anthology (E 7), coupled with the frontispiece directly illustrating that poem, announces a revivified lyricism, while “The Voice of the Ancient Bard” (E 31-32) reaches toward an epic vision that encompasses experience as well as innocence.5↤ 5. “The Voice of the Ancient Bard” was composed and etched no later than 1789 and was included in most separate copies of Songs of Innocence. In later copies of the combined Songs of Innocence and of Experience, printed 1818-27, Blake moved “The Voice of the Ancient Bard” to the Experience section, which the poem anticipates. The “Bard,” who “Present, Past, & Future sees,” is invoked in the “Introduction” to Experience (E 18). For printing dates, see the chart in Joseph Viscomi, Blake and the Idea of the Book (Princeton: Princeton UP, 1993) 376-81. In the design above the text, the bard strums a triangular harp even larger than the one played by his younger counterpart in the verso sketch (illus. 2). Poised chronologically between Poetical Sketches and Songs of Innocence, the drawings reproduced here show Blake experimenting with visual representations of the two poetical modes, and the states of consciousness they embody, in which he worked throughout most of his career.