While teaching a seminar on Jerusalem in the Buffalo summer session of 1970, I became aware of five Blake pictures the whereabouts of which are virtually unknown to present-day students of Blake. Four of these are in the Lockwood Memorial Library of the State University of New York; one is in the Rare Book Department of the Buffalo and Erie County Library. As these pictures have been lost track of for at least several decades, begin page 82 | ↑ back to top and as at least two of them have never been reproduced, it is appropriate to note their existence here.

I was first informed of the Lockwood Library Blakes by Mr. K. C. Gay, curator of the famous Poetry Collection there. No acquisition record could be found, but the pictures are described in A Selection of Books and Manuscripts in the Lockwood Memorial Library of the University of Buffalo (New York, 1935). At some undetermined time, the pictures were placed in the Library vault, where Mr. Gay came across them last year.1↤ 1 They now hang in the office of the Associate Librarian. In addition to Mr. Gay, I would like to thank Dr. Oscar Silverman and Professor Thomas Connolly for information about Thomas B. Lockwood and his collection. All four items had been sold at auction in New York by the American Art Association on 2-3 April 1928.2↤ 2 For which information I am grateful to Mr. Martin Butlin, Keeper of the British Collection at the Tate Gallery. They were part of a collection owned by Emma W. Bucknell of Philadelphia, and they are described in the sale catalogue as follows:

↤ 3 This statement is puzzling. In the Trianon Press facsimile of Europe, the male figure is nude (this page is from copy B, the Cunliffe copy); in the Huntington Library copy he is nude; and in the proof plate in the Lessing J. Rosenwald collection, he is also nude (this last is reproduced in the Philadelphia Museum of Art’s William Blake 1757-1827/A Descriptive Catalogue of an Exhibition of the Works of William Blake Selected from Collections in the United States, 1939, facing p. 38. In the Keynes-Wolf Census, p. 79, this figure is described as “a nude man . . . .” ↤ 4 The Important Library of / PRESS BOOKS / LIBRARY SETS / FIRST EDITIONS / Formed by the late / Emma W. Bucknell . . . The catalogue cover does not mention Blake, but the title page includes “A Notable Collection of BLAKE ITEMS” and particular note is made of the Blake collection in the foreword. The Blake items take up pp. 10-16 of the catalogue; page 15 is a reproduction of the Laocoön. The Blake section is headed “Extremely Important Series of Blake Items Including Original Drawings / Numbers 56 to 85, Inclusive.”

In the New York Public Library’s copy of the auction catalogue, sale prices have been marked next to each item. If these figures are correct, number 56 brought the highest price in the Blake section, going for $1,100. Number 57, the wash drawing, begin page 83 | ↑ back to top 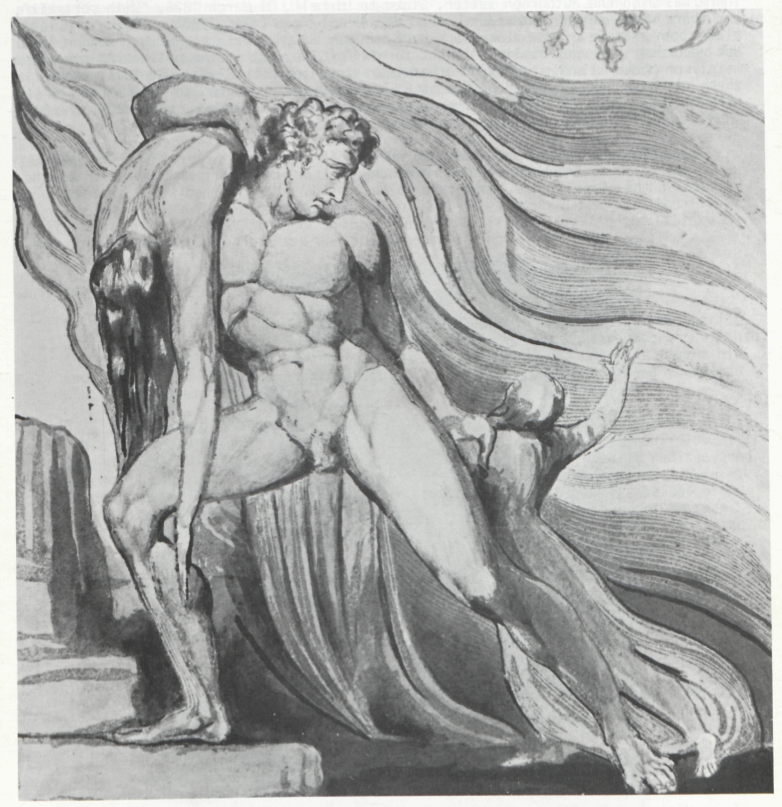 1 Watercolor drawing for Europe.   Published by permission of Lockwood Memorial Library, State University of New York at Buffalo.
begin page 84 | ↑ back to top sold for $900; the Beggar’s Opera engraving (in truly beautiful condition) brought $525. Among the other items in the Bucknell collection, the most important was surely number 76, one of the two known pulls of the Laocoön engraving.5↤ 5 Presumably this could be the impression designated #2 by Sir Geoffrey Keynes in Engravings by William Blake / The Separate Plates (Dublin, 1956), p. 56. However, this example is described as “much damaged” (p. 57), and no damage is evident in the reproduction in the American Art Association catalogue (p. 15). It should perhaps also be noted that of the four examples of the first state of the Beggar’s Opera engraving listed by Keynes (p. 73), none could be the Buffalo copy, as all four are accounted for elsewhere at some time between 1935 and the present. It went for $610. There was also one autograph letter, Blake to Linnell, 31 March 1826, “With portrait”; and there was a set of Illustrations to the Book of Job (#74, $280), lacking the last plate. An example of The Prologue and Characters of Chaucer’s Pilgrims (“London 1812, Not recorded in Keynes bibliog.”) went for $440. The rest of the collection consisted mainly of books illustrated by or otherwise associated with Blake. At least two of these may have been acquired by Thomas B. Lockwood and presented to the Library by him—Blair’s Grave and Mary Wollstonecraft’s Original Stories from Real Life; the Lockwood Memorial Library has a copy of each of these.

Several minor conundrums attach to numbers 56 and 57. Why did Blake tip the Europe drawing on to the back of an unrelated pencil drawing? For what purpose was the picture of the giant figure, too crude to be considered a finished work, intended? 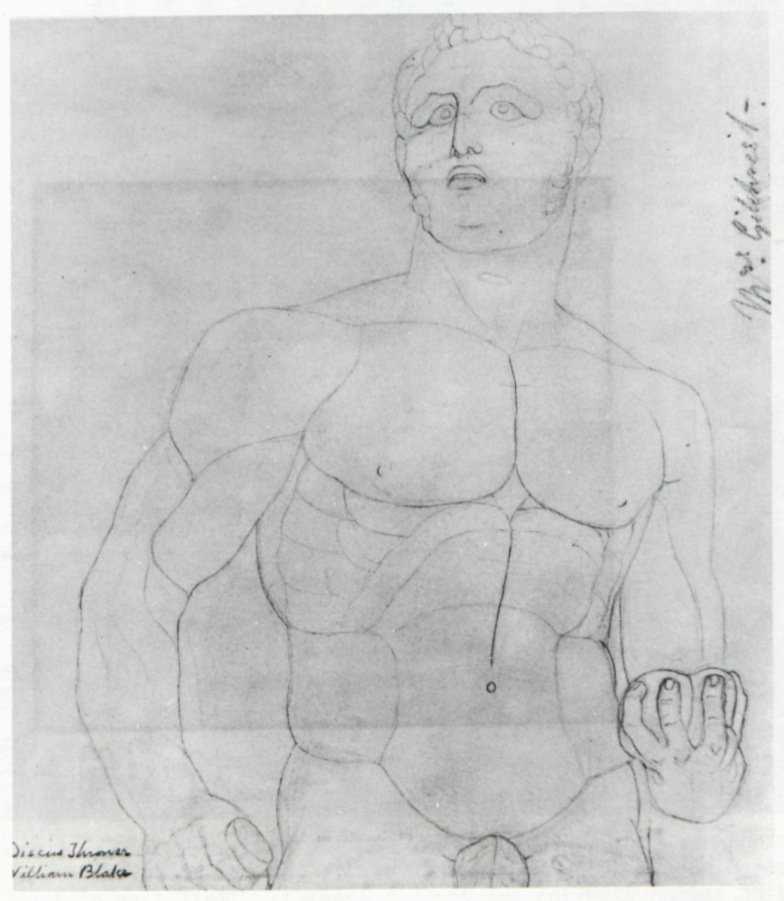 2 Pencil drawing.   Published by permission of Lockwood Memorial Library, State University of New York at Buffalo.
begin page 85 | ↑ back to top Solutions to these questions must await study of the pictures by a scholar expert in Blake’s pictorial techniques, but a tentative hypothesis may be offered here. The pencil drawing is so crude as to be almost certainly one of Blake’s early productions, as the Flaxmanesque linear quality also suggests. Perhaps it is a study from a plaster cast. In any event, the figure (as Mr. Ruthven Todd points out to me in correspondence) is less likely to be a discus thrower than a boxer holding a cestus, and the catalogue appears to be mistaken on this point, as was whoever wrote the pencilled inscription on the drawing. If this was a relatively valueless piece of early work, Blake may well have regarded it as expendable, and he may simply have used it as a mount to protect his later, highly finished Europe picture. As for the giant figure, he is recognizably a version of a very small figure in America, plate 1, lower left. Blake may have used cheap paper for this picture because he never intended it as a finished work: it could have been a study for the America figure or, alternatively, an experimental blowup preliminary to a possible finished design.

The Blake picture belonging to the Buffalo and Erie County Library is the illustration to the “Preludium” plate of Europe (plate 1). It was given to the Library by James Fraser Gluck, the benefactor who presented the manuscript of Huckleberry Finn to the same library. The picture is described in the Descriptive Catalogue of the Gluck Collection of Manuscripts and Autographs in the Buffalo Public Library (Buffalo, July 1899):

Original water-color, one of the designs made by the gifted, but eccentric, artist-poet to illustrate Europe, one of his so-called “prophetic” books published in Lambeth in 1794. The drawing represents a distorted, Caliban-like figure hiding behind a rock with a dagger in his uplifted hand ready to strike a young man who is approaching.

Miss Jane Van Arsdale, librarian of the rare book collection, tells me that for many years this picture was kept in the vault of the Albright-Knox Gallery in Buffalo, after having been loaned to the Gallery for an exhibition; it was only recently rediscovered and returned to the Library. Compared against the Trianon Press facsimile of Europe, the picture appears to be the same size as the corresponding portion of the top of plate 1. The coloration is different: foliage is colored yellow-brown rather than green, and some details of the foliage behind the Pilgrim figure do not appear in the Buffalo picture. However, the latter is in other respects very similar to the facsimile illustration, even in the configuration of shadows on the rocks. As in the case of the Lockwood picture from Europe, it is to be hoped that someone expert in Blake’s pictorial techniques will study this picture in order to give us a more precise account of it. begin page 86 | ↑ back to top 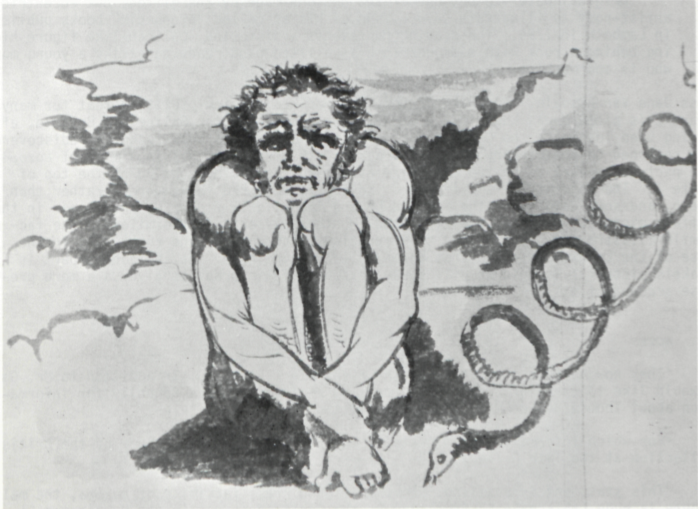