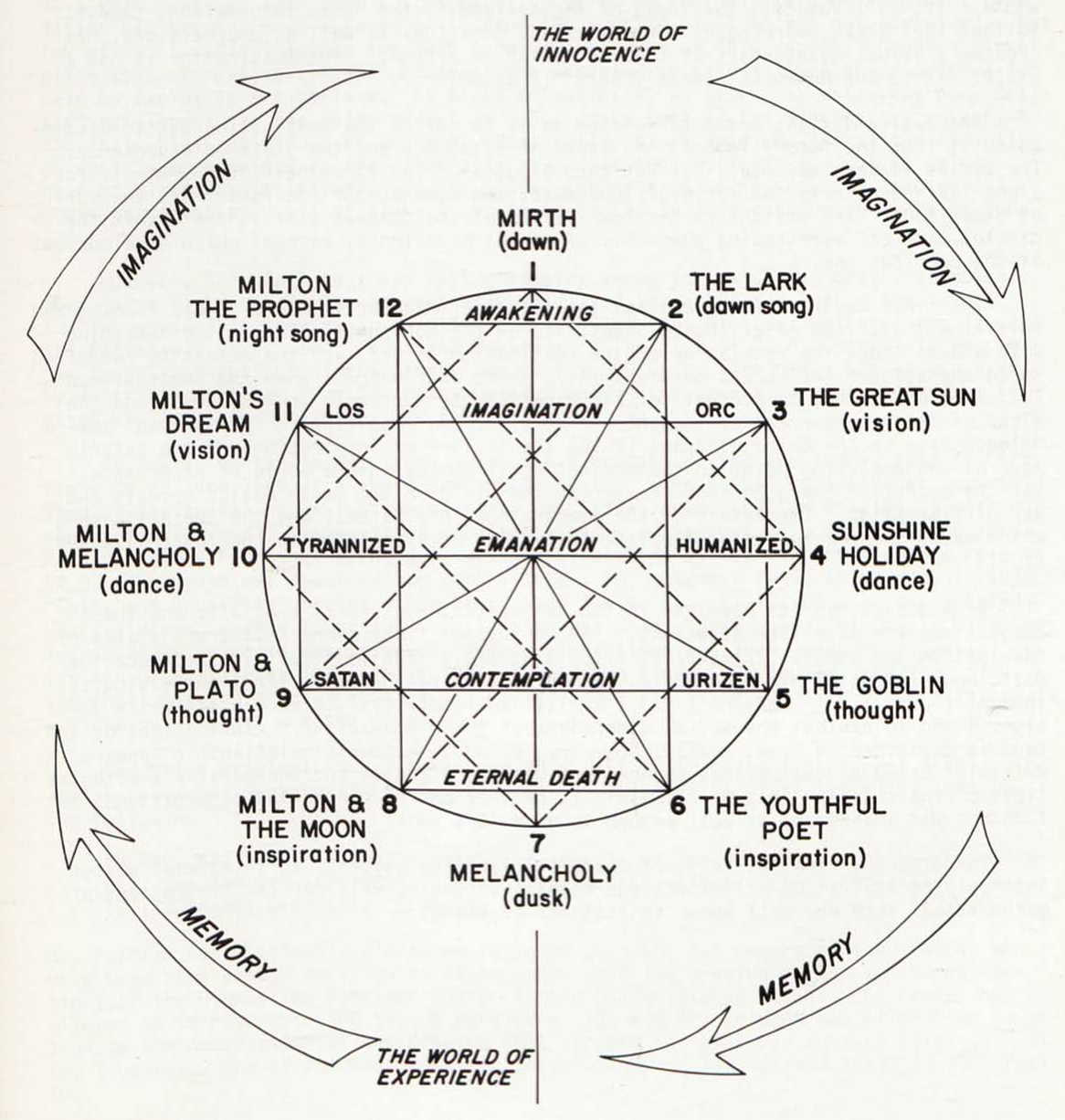 This diagram of thematic relationships suggests a direction and level for interpretation of Blake’s illustrations. As a descriptive worksheet, it points to specific thematic connections apparent in similar or contrasting motifs (e.g., the motif of light in darkness, 2/12). But primarily the diagram is interpretive. It is a circle of Eternal Identities which I propose are the concerns of the designs singly and as a whole. If, as I suggest, the focus of the designs is the Human Imagination, then it follows that Blake, working by contraries and negations as well as progressions, has created a visual counterpart of the definition in Milton: “The Imagination is not a State: it is the Human Existence itself” (M 32:32).

The twelve designs are interrelated so as to define the imagination and to distinguish it from the memory in both the state of innocence and the state of experience. The series is developmental, but not chronological. The first half of the circle (designs 1-6) represents the world of innocence; the second half (designs 7-12) the world of experience. The designs at the four points of the compass (the square within the circle) mark off overlapping quadrants of mental experience, each of which develops out of the previous one.

The first quadrant (1-4) depicts the innocent imaginative world in its dawning and fulfillment with the major themes identified on the horizontal lines: the awakening with a dawn song, the revelation of the imagination as Orc, and the resulting humanized world-emanation. The second quadrant (4-7) shows what happens when the innocent man relies on his memory to account for his experiences. Urizenic contemplation and the sleep of death masquerade as thought and inspiration, resulting in the movement toward Melancholy. In the third quadrant (7-10) the failure of inspiration and the satanic mode of contemplation point to the domination of memory in the world of experience. But the emanation emerging from the tyrannized world in the tenth design reveals the way of liberation. The return of the imagination, now as Los, and the prophetic song which marks the new awakening complete the vision of experience in the fourth quadrant (10-1).

Each design has its opposite in the two worlds, e.g., 1/7, 2/8, 3/9, and these oppositions are much like negations. The horizontal lines connect contrary states of imagination and memory (2/12, 3/11, 4/10, 5/9, 6/8). The vertical lines connect thematic oppositions within each world: song vs. inspiration (2/6, 12/8) and vision vs. thought (3/5, 11/9). Designs 1 and 7 exhibit the Individual in each state while designs 4 and 10 exhibit the social dimensions of their Emanations. (This aspect of the term is explained in Frye, Fearful Symmetry, p. 73.) A fourth relationship appears inevitable, based on the obvious connections between 6 and 11 and the parallels with the sides of the square. This relationship is neither one of contraries or negations, but I do not yet understand it well enough to give it a name.

The diagram, finally, is functional; its symmetry suggests an integrated vision that only careful study of the designs themselves can reveal, for the limitations of mathematical form are well known to students of Blake.