Kate Greenaway, Randolph Caldecott, and Walter Crane are generally considered to be the most important children’s book illustrators in Britain during the second half of the nineteenth century. In their biography of Greenaway (1846-1901), Spielmann and Layard state that, in spite of her illness in the last year of her life, “she was full of schemes for books—not merely projected schemes, but plans fully matured, first sketches made, and pages fully ‘set-out.’” Among these “was a new Blake’s Songs of Innocence, to be published at a shilling net, each song with at least one drawing; this was so fully worked out that for certain of the designs several sketches were made.”1↤ 1. M. H. Spielmann and G. S. Layard, Kate Greenaway (London: Adam and Charles Black, 1905) 251. It is unlikely that the project ever went beyond the sketching stage. There is no edition of any work by Blake listed in Thomas E. Schuster and Rodney Engen, Printed Kate Greenaway: A Catalogue Raisonné (London: T. E. Schuster, 1986). I have not been able to locate any such sketches by Greenaway illustrating individual poems in Blake’s Songs of Innocence, but I reproduce here what I believe to be her design for the projected book’s front cover, dust jacket, or both (illus. 1).

Those familiar with Greenaway’s often saccharine but carefully executed watercolors and published designs might find it odd to attribute this bold and awkward sketch to her hand. This style, however, can be found among many of her first thoughts on paper. Even more indicative of her authorship is her distinctive handwriting at the bottom of the design.2↤ 2. For reproductions of some examples of Greenaway’s rough preliminary sketches, and a reproduction of her handwriting, see Kate Greenaway: Catalogue of an Exhibition . . . at the Hunt Institute, ed. Robert Kiger (Pittsburgh: Hunt Institute, 1980) 51 (an illustration of page 61 of Greenaway’s journal), 54, 81, 83. Hastily written with at least two letters elided, this inscription reads as follows: “blue Paper Cover[.] Label Cream[.] Gr[a]pes and / leaves bo[r]der[.] white letters -”. These are instructions, or perhaps simply aides-mémoire for the artist herself, for the color scheme of the cover and a description of the border design of grapes and leaves for the vignette below “BLAKE.” The border motifs were sketched so awkwardly that they might be misinterpreted without verbal notation. The author and title inscriptions are clearly written, although Greenaway probably began to write “BLACK,” for the “K” of “BLAKE” is written over a “C.”

The center of the vignette apparently pictures two seated figures facing each other. They are as minimally represented as the border, but would presumably be developed in more detail in subsequent drawings. Behind and slightly overlapping the back of the figure on the left is a capital “B.” Greenaway probably began to write Blake’s name in this space, and then changed to the name above with the two figures in the vignette. Three facsimiles of the Songs, including William Muir’s of 1884, had been published by 1901, and thus Greenaway need not have had access to an original copy to have been influenced by the leaves, vines, and grape clusters pictured in Blake’s designs for “On Anothers Sorrow,” “The School Boy,” and both plates of “The Ecchoing Green.” Electrotype reproductions of three of these plates, absent only the second plate of “The Ecchoing Green,” were also available in Alexander Gilchrist’s Life of William Blake, 1863 and 1880. The human figures are less easily related to Blake’s imagery. The closest parallel is the two very small figures, seated on a tendril and facing each other, below the second word of the title to “Nurses Song.” None of these similarities is sufficient to prove that Greenaway was responding to Blake’s own illustrations in Songs of Innocence.

David Bindman gave me the drawing in 1980. It languished half-forgotten in a drawer until a house cleaning returned it to notice in February 2005. 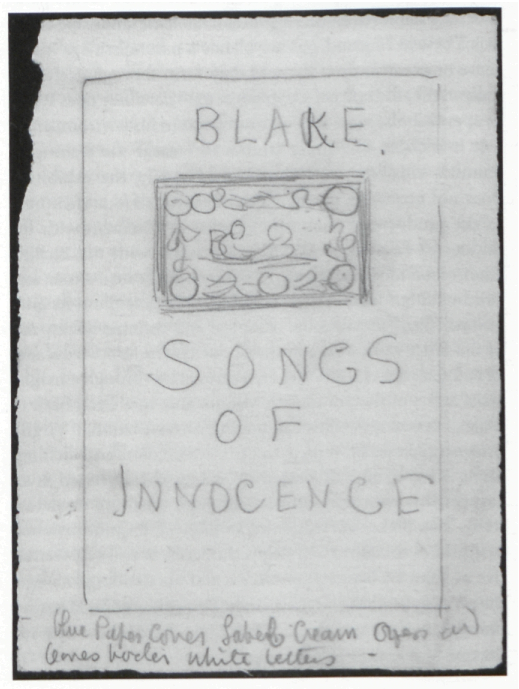