To celebrate the 249th birthday of William Blake, the Blake Society had the honor of welcoming legendary rock artist and performer Patti Smith. With Philip Pullman, current president of the Blake Society, having presented the annual lecture in 2005—the first of its kind—this series of lectures could not have had a better start. Like the first one, this year’s lecture came to be a great occasion. Patti Smith’s performance was one of those rare events that will long remain in the memories of those fortunate enough to get a ticket to the sold-out show.

Smith rose to fame, quite fittingly, at the time of the explosion of the New York punk scene in the mid-seventies, and her music and poetry have withstood the test of time. When she first came to share the stage at CBGB and Max’s Kansas City with the likes of Television, Talking Heads, Blondie, and the Ramones, she had already released her much acclaimed Horses album (1975). With hindsight one can see a different level of musical maturity than, say, the Sex Pistols, the Damned, or even the Clash; this early sign of promise comes as no surprise since Smith’s artistic output shows an impressive breadth of expression. Her records range from the raw and naked Radio Ethiopia via the more polished Wave and Easter albums to the emphatic comeback of the last 10 years, launched with the elegiac Gone Again and continuing with an unprecedented series of CD releases. Smith has recorded 10 albums, including the release in early 2007 of Twelve, a cover album with some of her favorite songs. She has also published several volumes of poetry and other books.

It is with New York that we naturally associate Smith, and the characteristic atmosphere and attitude of the city have become something of her middle name. Apart from the celebrities of the punk movement, she has connections to beat writers like Allen Ginsberg and William S. Burroughs, with John Cale and of course Robert Mapplethorpe, as well as music icons such as Bob Dylan and Bruce Springsteen. She has also collaborated in various forms with several of these; for instance, her biggest commercial success came with “Because the Night,” composed together with Springsteen.

Smith has made no secret of her admiration for Blake, and it was obvious during her performance that she has taken the anecdotes of Blake’s life to heart. She made numerous references to these throughout; perhaps the most memorable was when she told the audience of the parallel between her own first meeting with her then husband-to-be, Fred “Sonic” Smith, in a Detroit doorway and the more famous (to Blakeans at least) first meeting of William and Catherine at the Boucher’s house in Battersea (“Do you pity me?” etc.). The artistic influence of Blake can be seen in many of her songs and poems. One good example is “My Blakean Year” from her CD Trampin’. (The draft of this song was part of an exhibition, William Blake: Under the Influence, at the British Library, 11 January-21 March 2007, among other manuscripts by contemporary artists influenced by Blake.) In summer 2005 Smith was honored with the appointment as curator of the South Bank Meltdown festival in London. Having the opportunity to select artists of her own liking, she opted for several with an interest in Blake, such as Billy Bragg, and devoted one night each to performances centered on Songs of Innocence and Songs of Experience.

There is little doubt that the location of the Blake Society’s annual lectures greatly contributes to creating a special atmosphere, and thus to the success of the two lectures held so far. The Church of St. James, designed by Christopher Wren, is a wonderful and rare place to us Blakeans, and Patti Smith hit the right chord at once by acknowledging this fact in her first of many openhearted and spontaneous addresses to the audience during the show, telling us of the image in her mind of Blake’s parents carrying little William to the font to be baptized. The memorial plaque of Blake’s christening on 11 December 1757 has recently been rediscovered and placed next to the font where it belongs. Smith continued in this way, conjuring a magic spirit through which the audience could almost feel Blake’s presence. The performance was also quite spontaneous and partly improvised, something which added to the benevolence and goodwill radiated by the artist. Only hours earlier Smith had picked up her friend Aaron Budnik at one of the secondhand bookshops around Charing Cross Road to support her on the acoustic guitar. Then, as she lost her way during the first song, she also confessed herself to be quite nervous and a bit intimidated by the collective Blake knowledge of the present congregation. Completely forgetting the words, she had to start again. On another song she played the wrong chords, informing the audience that, much to the delight of her longstanding and renowned fellow musicians in the Patti Smith Group, she could play only in A minor. Smith’s good sense of humor throughout and generous down-to-earth attitude created a warm atmosphere in the crowded church. The audience was presented with a well-balanced mixture of songs and poems, both by Blake and from her own production. She started somewhat safely by reciting “The Lamb,” perhaps what could be expected, knowing that a recording exists as part of the live version of “Boy Cried Wolf.” begin page 45 | ↑ back to top Next came the first musical number and after that she had the courage convincingly to sing “The Tyger.” From then on we lucky ones in the audience knew that we were in for a special treat. Among other much appreciated numbers, she read one of her best-known early poems, “Babelogue,” showed that her political commitment is still there in a new song, “Qana,” about the situation in the Middle East, played “Wing,” the beautiful “Distant Fingers” from her second album, Radio Ethiopia, and, of course, “My Blakean Year.” To us Blake people “My Blakean Year” is quite understandably the big hit, but the most emphatic and intense moment came when Smith came walking down the aisle and let the floor do the chorus of “People Have the Power.” And power, both of voice and charisma, is definitely what this exceptional woman has.

When the last song was over there was wild applause and Patti Smith came in for one extra number, the tender “Paths That Cross,” composed by her late husband, after which there was a long standing ovation. Copies of her new collection of poems, appropriately entitled Auguries of Innocence (published in 2006 in Britain by Virago Press, the year before in the US by HarperCollins), were sold out afterwards as Smith stayed on, generously signing them for over an hour.

It has been a great privilege to take part in these two enchanting and successful evenings with Philip Pullman and Patti Smith, and we must now hope that the annual Blake lecture becomes a permanent event. After Smith’s remarkable performance, however, there is one slight dilemma facing Tim Heath, Keri Davies and the other commendable organizers: whom are they going to bring in next time (the 250th anniversary of Blake’s birth at that!) to repeat this wonderful success? Bob Dylan or the Beatles? 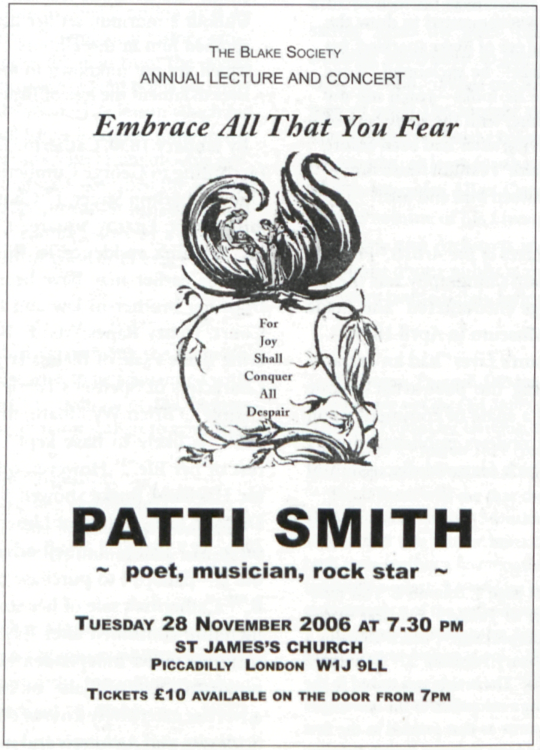 Illustration courtesy of the Blake Society[e]