As a student at Oxford I earned a bit of money working part-time in the college library. The hourly wage was small, but the labor wasn’t taxing, except for locking up and shutting down the lights in a long gallery reputedly haunted by the ghost of someone disappointed at Finals (a person, incidentally, who turned up well albeit wrinkled at a gaudy in my last term).

But the shelving and the cataloguing and the reserve requests were really made tolerable by the possibility of an outing with the college librarian. Periodically the librarian would receive word that someone had donated his or her library to the college and then she—and sometimes to my delight she and I—would be dispatched to examine the books and carry away our selections. These alumni seemed to favor the environs of North Oxford, or else they had followed the Woodstock Road along a bit further and daringly settled in the Cotswolds. They inhabited similar houses—not architecturally similar of course, but eerily alike in their proportion of armchairs to reading lights, cretonnes to bookrests, and well-used dictionaries to presentation copies. In the librarian’s venerable Morris Minor we would travel at an unflappable 30 mph towards these quiet houses and their expectant libraries. I was always waiting for the bright moon to drop behind the cottage roof.

These excursions were my first proper lesson in the deep autobiography that is serious book collecting. They taught me just how many layers of self are manifested in a library, and the extreme generosity of selves who can project their libraries forward into another sphere and towards another set of readers. I learned that bookshelves stand at the convergence of dense, humming lines of testimony: not just to a person’s subject and expertise and interests, but to his or her travels, experiences, consolations and connections; not just to the provenance of rare volumes, but the point at which a book’s passage through the world merges with the whole journey of a collector. A life lived with books can be wholly different from a career enacted through them. There are times when geomancy seems a more necessary science than bibliography.

Now imagine how these issues are amplified when the collection in question is “one of the three most important Blake collections, institutional or private, formed in the second half of the twentieth century” (Robert Essick, quoted in the “Introduction”). begin page 132 | ↑ back to top And when the collector is not only our foremost Blake biographer (Stranger from Paradise [2001]), but a scholar whose work forms part of the superstructure of Blake studies. Here indeed is a “Web / Of Ages & Generations, folding & unfolding,” which is a rather more pleasant image when taken out of context. The books, paintings, manuscripts, drawings and artifacts brought together by G. E. Bentley, Jr., and E. B. Bentley over nearly six decades form a remarkable production in their own right. The works (more than 2500) parallel and embody Bentley’s meticulous reconstruction in his numerous books and articles of Blake’s associations, circles, and working practices. This is a collection that recreates the sociability and productivity—not to mention the dizzying interconnectivity—of the book and art worlds in Blake’s lifetime. Recently gifted to the E. J. Pratt Library of Victoria University at the University of Toronto, the Bentley collection was show-cased in the fall of 2006 through a fine exhibition curated and catalogued by chief librarian Robert C. Brandeis.

The exhibition begins with the visage of Blake himself. A copy of Deville’s life mask, in which Blake’s habitual sweetness of expression was soured by the weight of the plaster, is paired with Schiavonetti’s engraving after the Phillips portrait, a print used as the frontispiece to The Grave in 1808. It is an apposite choice, not only because it answers our wish to greet Blake himself, but also for the many layers of reproduction and transmission manifested in these works. Everything follows from a desire to translate the imaginative faculty.

The first movement of the exhibition shows the range of Blake’s graphic production, from sketch and manuscript to engraving on copper and wood to relief etching. It’s instructive to see three electrotypes—“London,” “Infant Sorrow,” and “The Divine Image”—from the 16 made after Gilchrist’s c. 1861 electrotype copies of Blake’s plates. There are three sets of these electrotype copies now extant, and I feel rather subdued when I think of printing from them in Bentley’s seminar. Blake’s designs for and after the work of other artists (including the wonderful engraved portrait of Lavater, beaky and exacting as a Renaissance princeling) ready us for the exquisite Virgil illustrations and the magisterial Dante and Job suites that fill the South Gallery. The latter is a splendid 1826 “proof” copy on India paper. A pencil drawing in the “Visionary Heads” mode—representing Prince Arthur or perhaps an unusually svelte Henry VIII—and an autograph riddle manuscript penned on the verso of a proof of Hayley’s Designs to a Series of Ballads direct us to the calligraphic vigor of The Marriage of Heaven and Hell. Copy M of Marriage, one of the collection’s greatest treasures, consists of A Song of Liberty printed, as the catalogue describes, “on one sheet forming four pages with the first page left blank” (9). Together with copy L (in the collection of Robert Essick), this work provides important evidence that the Song was not just the tailpiece of Marriage, but may have been intended for distribution as a separate pamphlet.

Copy M of Marriage dramatizes a tendency within the Bentley collection as a whole to illuminate artists and audiences, 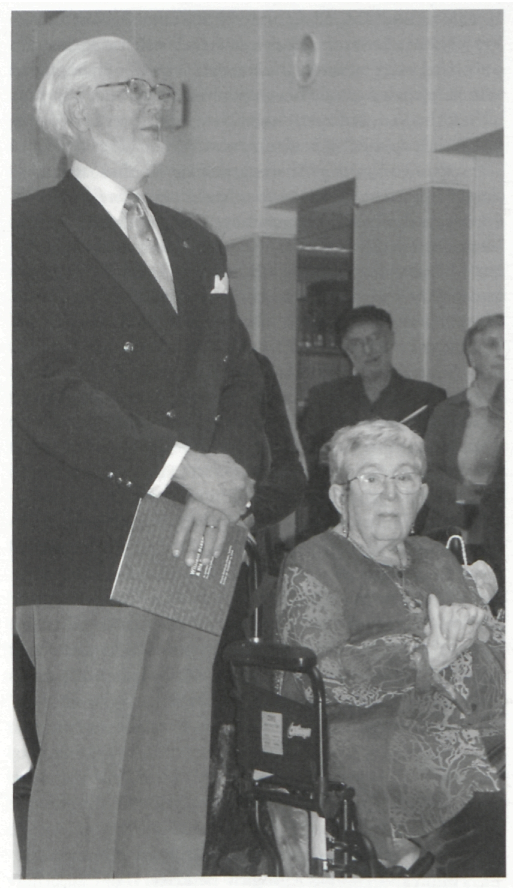 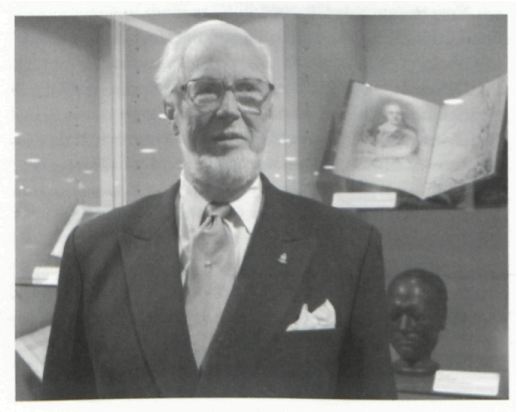 E. B. Bentley and G. E. Bentley, Jr., at the reception to mark the opening of the exhibition.   Photographs courtesy of Alex McKay.
begin page 133 | ↑ back to top issues of production and reception in the period. The professional sphere that Blake (periodically) inhabited is embodied in the exhibition through the work and biographies of some of Blake’s key associates: Cumberland, Flaxman, Fuseli, Linnell, Stothard, and Tresham. These six men, or alternatively, “Men who occupied the sixth chamber,” appear here as artists in their own right as well as patrons, readers, or peers. Sometimes of course these roles converged, as in the case of Cumberland, whose literary manuscripts, scrapbooks, and sketches live alongside books embellished with engravings by Blake. Linnell is represented by an oil portrait sketch of Mrs. George Stephen (wife of a solicitor consulted by Linnell over the Blake estate), a kindly, intimate image that seems consistent with Linnell’s handling of Blake himself. Stothard’s tender watercolor Infancy (c. 1802) makes the sharp dealing of the Canterbury Pilgrims affair seem almost impossible. And Tresham’s oil painting Anthony and Cleopatra, executed for Boydell’s Shakespeare Gallery, calls up the aspirations and disappointments of a whole decade of British art.

The Bentley collection is both an entity and the emanation of a distinguished scholarly collaboration. As a “working library” in its richest sense, one that documents the material and spiritual labor of the subject, the biographer, and the collectors, its relocation to the Pratt Library at Victoria University in Toronto seems very appropriate. Here it is in close proximity to an important holding of Coleridge materials and the Northrop Frye papers, not to mention Douglas Martin’s portrait of Frye composedly levitating. And here the lines of the collection are extended magnetically towards a new set of readers, scholars, and students. William Blake and His Contemporaries was opened in late 2006 with a gala reception, memorable on many counts, not the least for hearing a university president quote “When the morning stars sang together” rather than the passages of Job more habitual to administrators. But what struck me most forcibly was that the qualities that converge in successful collecting—knowledge and insight, judgment and good fortune—also shape the community one collects in turn. In a life lived with books the notion of provenance, like the “little lovely Allegoric Night” in Jerusalem, may be “stretchd abroad, expanding east & west & north & south.”

Editors’ note: Information on ordering the catalogue is available at <http://library.vicu.utoronto.ca/libpubs.htm>.