MUHLENBERG College’s Wings of Fire, an exhibition curated by Grant Scott and his senior seminar students, offered a range of Blake originals and historically significant facsimiles and other editions that collectively represent 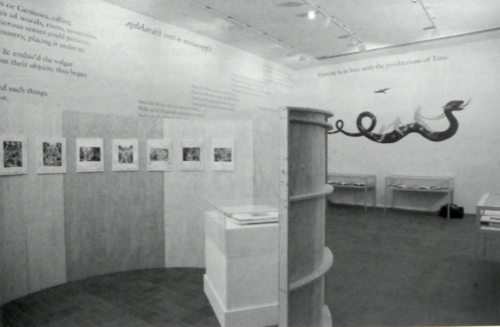 Image courtesy of Grant Scott, the Martin Art Gallery, and Paul Pearson Photography.
the complex history of Blake’s relationship with his audiences. The core of the exhibition comprised two originals on permanent loan to Muhlenberg’s Martin Art Gallery: a rare third-state impression of the 1810 engraving of Chaucers Canterbury Pilgrims and a colored copy of the 1797 Edwards edition of Young’s Night Thoughts with Blake’s illustrations. Florence Foerderer Tonner collected Canterbury Pilgrims and Night Thoughts in the early twentieth century, eventually leaving most of her large Blake collection to the Philadelphia Museum of Art; these two pieces were first donated to the Lutheran Church of America then passed on to Muhlenberg College. A local Blake scholar also loaned an uncolored copy of Night Thoughts, a first edition of The Grave with Blake’s illustrations, an 1874 edition of Blake’s engravings of the Book of Job, editions of William Muir’s lithographic reproductions from the 1880s, and high-quality facsimiles produced by the Trianon Press between 1951 and 1979. Wings of Fire also featured such additions as a beautifully bound copy of the Yeats edition of Blake’s works and two replica printing plates based on electrotypes cast from Blake’s original copperplates at the time of Gilchrist’s biography. Joseph Viscomi loaned these plates to the exhibition, opening it on 19 March with the lecture “Blake’s Enlightened Graphics: Illuminated Books and New Technologies.” Muhlenberg alumni and seniors closed the exhibition with a dance adaptation of “The Tyger” and selections of Blake’s Songs set to music.

Scott and his Muhlenberg seniors playfully designed the exhibition space with a spiral half-wall set up to display Blake’s Illustrations of the Book of Job toward the rear of the room. Students stenciled lines of Blake’s text in large letters on the walls and floor in the form of concrete poems. For example, the lines “How do you know but ev’ry Bird that cuts the airy way, / Is an immense world of delight, clos’d by your senses begin page 111 | ↑ back to top five?” (E 35) were stenciled the length of an entire wall in the shape of a bird’s wings, while other lines ran along the baseboard and around display cases, swirling and diving across other walls. The students working with Scott clearly loved their subject, their playfulness a sure indicator of how much Blake’s work became their own. It’s not hard to see why. If online images or print reproductions inspire, Blake originals inspire even more. What is now called book history has long occupied Blake scholars; seeing the Muhlenberg exhibit reminded me how much of this history was a labor of love, both for Blake and his readers.