The Man Who Married the Blakes

ON 18 AUGUST 1782 William Blake and Catherine Boucher were married in St. Mary’s Church, Battersea, an event that is commemorated by a stained glass window in the church today. The clergyman officiating was the Rev. John Gardnor, who in the words of Alexander Gilchrist “was also an amateur artist of note in his day” (35). Gilchrist treats Gardnor’s artistic career with considerable irony, but Gardnor was actually a competent landscape artist and engraver who also had some interesting educational, political, and literary associations.

John Gardnor (b. 1728 or 1729) kept a drawing school at 13 Kensington Square from c. 1763 to 1770, evidently a successful one because it expanded into the adjoining numbers 12 and 11. From 1763 to 1767 and again in 1769 he exhibited at the Free Society of Artists, showing a total of more than two dozen paintings and drawings of landscapes and of such popular subjects as Windsor Castle and Chepstow Castle, Monmouthshire.1↤ 1. This information is from Cust, from Hobhouse, and from Graves, Society of Artists 100.

After taking holy orders he gave up his drawing school and became curate, then vicar of Battersea, becoming vicar in 1778 and remaining until his death in 1808. He was the only ordained clergyman of the Church of England who was also a practicing artist at that time, for although he had given up his school he had not given up painting. He began exhibiting at the Royal Academy in 1778 with two landscapes in oil, and exhibited every year, with the exceptions of 1792 and 1794, through 1796 (Graves, Royal Academy 3: 203). He also hoped to become chaplain to the Royal Academy upon the resignation of the incumbent, the Rev. Matthew William Peters (Williamson 201). In 1789 and again in 1790 Gardnor applied for the position, but unsuccessfully; it went to the Rt. Rev. Thomas Barnard, later Bishop of Limerick, in 1791.2↤ 2. For this information I thank Andrew Potter, research assistant at the Royal Academy Library.

The subject matter of Gardnor’s exhibited pictures changed after 1787. Through that year his locales had been in England and Wales, but in 1788 his two entries were The Castle of Rheinfels at St. Goar, on the Rhine and The Castle of Ober Lahnstein, near the River Rhine. These pictures were among the products of a trip to the Continent earlier that year, as were, with one exception, the fourteen works Gardnor showed in the exhibitions of 1789-91. They were among the originals for aquatints, the planned publication of which was announced in a booklet published in 1788: Proposals for Publishing by Subscription, a Collection of Views, Taken on and near the River Rhine, at Aix la Chapelle, and on the River Maese; By the Reverend John Gardnor: To Be Engraved in Acqua [sic] Tinta, by R. Dodd. Here it was stated that “the picturesque Beauties of the River Rhine, have long been subjects of admiration, though never produced to the public by the Painter or Engraver.” There were to be eight numbers, each containing four prints 20 × 17 in. in size, and accompanying text. The price was one guinea per number to subscribers, colored copies 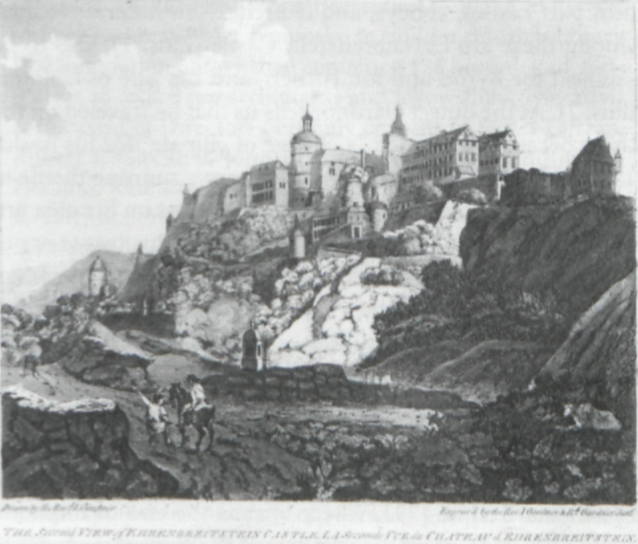 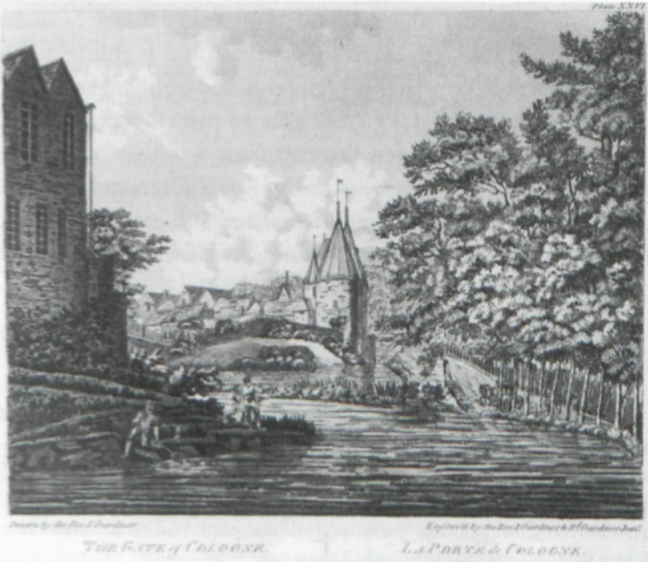 2. The Gate of Cologne.   John and Richard Gardnor after John Gardnor. Views (1791), print opposite 122. California History Section, California State Library.
begin page 154 | ↑ back to top three guineas, and subscribers were invited to send their names to Mr. Walter, Bookseller, Charing Cross. The folio was issued in parts that year, with aquatints after Gardnor’s originals by engravers including John and Elizabeth Fletcher, Dodd, J. S. Robinson, Richard Gardnor, Jr. (Gardnor’s nephew), and Gardnor himself. The plates were then re-executed by the Gardnors in smaller size and published with the text in 1791. An unillustrated volume consisting of text alone also appeared that year, with an impressive list of subscribers, including the Lord Mayor, John Wilkes, Sir William Chambers, Joseph Farington, and Edward Burney.

Gardnor’s characteristic views are of architecture—for the most part castles, abbeys, and churches—in natural settings. Among these are Ehrenbreitstein Castle (illus. 1), also to be a subject for Byron and for Turner,3↤ 3. Powell (21) shows that Turner was familiar with Gardnor’s Views before his own Rhine journey. and the gate of Cologne (illus. 2). At the outset Gardnor tells us that he traveled on the Rhine because he needed “a change of climate” for his health (1-2), and indeed his health problems are a running theme in his narrative.4↤ 4. Unless otherwise indicated, references are to the edition of 1788. He also offers ample reflections on his own art, as when he explains the differences between his two views of Rheinfels Castle[e] according to the light at the time of day when the view was taken. Another theme is political. In connection with Ruin of the Abbey of Bingen he wrote in 1788: “It is, I think, impossible, for the most indifferent observer to survey the original, without lamenting its destruction, execrating the ambition of Kings, and deprecating the wanton barbarities of military executioners” (plate 2). This general sentiment is particularized in 1791, where toward the end of the book Gardnor says, “Among the wonders of the present period, not the least remarkable is that the army in France has generally and warmly declared for liberty” (153). Gardnor had known Jacques-Pierre Brissot de Warville during Brissot’s residence in London during February to November 1783 (Dybikowski 194), and this association may have prepared the way for his pro-revolutionary sympathy.

In 1793 the subjects of Gardnor’s RA exhibition pictures changed again, to one view of Wales and three of Monmouthshire. He must by then have had in mind the illustrations to be provided for his friend David Williams’s History of Monmouthshire (1796), engraved by Gardnor and J. Hill in 1793. Williams, a prolific writer on religious and political subjects,5↤ 5. Erdman draws a parallel between an aspect of Blake’s political thought and Williams’s (224). “David Williams . . . made diagrams showing no constitution healthy in which the senses of the body politic, i.e., the common people from whom all political ideas must flow to the ‘head,’ were barred from political participation.” He cites Williams, Letters to a Young Prince (London, 1791) 47, 73. was also a supporter of the French Revolution in its early days, and another link between the two men was that both were among the original members of the Royal Literary Fund, set up in 1790 to help destitute writers (and still existing today). Among the thirty-six plates Gardnor furnished were views of Abergavenny Castle, Caerleon Castle, and Tintern Abbey, the last unusual in showing the abbey from the north with everyday commercial activities on the river. Williams’s voluminous text includes translations from Welsh manuscripts by Edward Williams, a translation of a poem by the bard Gyffyd Llwd, and an excerpt from the “Sabrina” passage of Comus headed “Milton’s Description of the Severn.” Gardnor and Williams later had a falling-out about this venture. “Since that work was published,” noted Farington, “Williams & Gardnor have quarreled about the profits of the work.—Gardner [sic] professing to understand that Williams undertook to assist him as a friend, the other declaring that He looked for a reward” (Diary 4: 1406, 22 June 1800).

One curious aspect of Gardnor’s career is represented by his Plan of the Academy, at Battersea, in Surry, which the British Library catalogue conjectures to have been published in 1790. It is difficult to see how he could have been able to fulfill his duties as a vicar, pursue his artistic activities, and found a school at the same time, but this eight-page pamphlet speaks of the academy not as a theoretical project but as a school “kept by” him. The author begins by saying that it is necessary to have only a small number of students in order for the master “to attend to the Temper, Genius, and Disposition, of every Individual” (1), and more than half the pamphlet is devoted to the importance of “cultivating the Arts of Reading, Writing, and Speaking, our own Language with Energy and Propriety” (5). Greek and Latin are “taught with equal Care and Assiduity,” as is French; among other subjects are mathematics, geography, music, and fencing, all taught by resident masters. Did this academy actually exist? Or is it an ideal academy written of as if it did exist?

There is no evidence that William Blake and John Gardnor met again after August 1782, although both showed pictures at the Royal Academy exhibitions of 1784 and 1785. Nevertheless, it is both interesting and appropriate that the man who married the Blakes was both an artist and an early supporter of the French Revolution.

Dybikowski, J. On Burning Ground: An Examination of the Ideas, Projects and Life of David Williams. Studies on Voltaire and the Eighteenth Century, no. 307. Oxford: Voltaire Foundation, 1993.

Gardnor, John. Hints of Occurrences on a Tour to Manheim, Mayence, Aix la Chapelle, Brussels, etc. with Explanations of Views Taken on and near the Rivers Rhine, Maese, etc. London: R. Noble, 1791.

—. Views Taken on and near the River Rhine, at Aix la Chapelle, and on the River Maese . . . Engraved in Aqua Tinta by Willm and Elizabeth Ellis. London: W. Ellis and J. Walter, 1788.

Williams, David. The History of Monmouthshire; Illustrated and Ornamented by Views of Its Principal Landscapes, Ruins and Residences; by John Gardnor, Vicar of Battersea London. London: D. Baldwin, 1796.