A Possible Sketch of Blake’s Napoleon

THE Spiritual Form of Napoleon, an apotheosis in “fresco” by William Blake, disappeared in the last quarter of the nineteenth century. Blake’s design of Napoleon was exhibited in 1876 at the Burlington Fine Arts Club, and H. H. Statham briefly described it in Macmillan’s Magazine (34 [1876]: 60-61). According to Statham, Napoleon was flanked by “less explicable” angels, whereas the French emperor was portrayed as a “strong energetic figure grasping at the sun and moon with his hands, yet chained to earth by one foot, and with a pavement of dead bodies before him in the foreground ....” Also on display at the Burlington Club was Blake’s “The Spiritual Form of W. Pitt guiding Behemoth,” a work depicting the English statesman, his head encompassed with an “extraordinary ‘halo’ effect ....” Although Statham concluded that the picture of Napoleon was “the most striking ... of the two” allegorical paintings, the “central figure” of Napoleon (who died in 1821) was “not the finest in execution,” since the figure was “but loosely drawn.”1↤ 1. In reference to Statham’s comments, see also Morton D. Paley, Energy and the Imagination: A Study of the Development of Blake’s Thought (Oxford: Clarendon Press, 1970) 182-83, and note Bo Lindberg’s conjectural reconstruction of the Napoleon design, based upon Statham’s description, in William Blake’s Illustrations to the Book of Job (Åbo: Åbo Akademi, 1973) 301-11, fig. 106.

Though nothing has come to light on the lost picture of Napoleon, attention should be called to a faint and loosely drawn sketch by Blake in which a giant allegorical figure in the heavens is abutted by two winged angels (as in Statham’s description). One angel holds a key (to heaven?), while the other holds an open book (of judgment?). The sketch is reproduced in Martin Butlin’s The Paintings and Drawings of William Blake, where it is speculatively titled Satan between Two Angels (?), c. 1815-20 (?) (#592, plate 828). Each hand of the colossus holds a globe, the sun and moon respectively,2↤ 2. Compare The Four Zoas Night IX (117.6-9, E 386), where gigantic Los with “his right hand ... Siezd the Sun,” while “His left hand ... coverd the Moon,” for he “tore ... down” these turning spheres, “cracking the heavens across from immense to immense,” as “judgment” is at hand. Blake’s language is borrowed from Thomas Paine’s Age of Reason, where fierce Mohamet refuses to alter his divine actions, even “Wert thou ... to come to me with the sun in thy right hand and the moon in thy left ...” (Paine’s emphasis). See The Complete Writings of Thomas Paine, ed. Philip S. Foner, vol. 1 (New York: Citadel Press, 1945) 533. Note also Night Thoughts 236, where a nude male plunges precipitously through the heavens, holding a cosmic globe in each hand, a scene attended by flaming comets or meteors. and these cosmic spheres are shackled as a ball and chain to his wrists.

One foot of Blake’s giant male (aspiring to heaven) is chained to earth, possibly connoting Napoleon’s imprisonment on Elba or St. Helena.3↤ 3. In a design probably intended for the Book of Enoch, a figure soars among the stars, though chained to earth (Butlin, Paintings and Drawings, plate 1052). He is nude (as in Blake’s apotheosis of Lord Nelson) and has a huge triple aureole about his head (iconography utilized by Blake in his apotheosis of Pitt). The beak of a huge carnivorous bird(?) menaces the vitals of the shackled colossus,4↤ 4. The giant bird may reflect (as well as revise) Revelation 19.17-18, where a giant “angel” appears, “standing in the sun,” and “cried [out] ... to all the [ravenous] fowls that fly in the midst of heaven, Come and gather yourselves together unto the supper of the great God,” where “ye may eat the flesh of kings, and the flesh of captains.” In The Four Zoas Night VIIb (88[96].19-27, E 361) “naked” Los “reard his mighty stature” into the heavens—“on Earth stood his feet”—and the moon “circled” his “furious forehead,” while his “knees” were “Bathed in bloody clouds,” a scene where flesh-hungry “Eagles cry & ... Vultures laugh,” for “Now comes the night of Carnage now the flesh of Kings & Princes” serve as “our food,” while “the blood of Captains” will serve as “our drink.” Such language is reminiscent of chapter 19 of Revelation. The reader also should not miss Blake’s subtle allusion to book 1 of Paradise Lost (221-24), where Satan “rears” his “mighty Stature” off the burning “Pool,” phrasing that Blake in his Notebook (see E 801) planned as a motto for the emblem of fire in The Gates of Paradise, though the motto was not used in either of the engraved versions of this work. and to the right and left, at the bottom foreground of the page, two smaller birds also threaten the giant. Pertinently, the verso of the sketch portrays the same scene in reverse, although the large bird on the recto is not present. When Butlin catalogued the recto, it had been untraced since 1949, and he was unaware of the verso at that time. It seems probable that Blake’s verso and recto sketches of “Satan” are preliminary designs for Blake’s apotheosis of Napoleon.5↤ 5. Martin Butlin, in private correspondence, agrees with my suggestion that the recto/verso sketches are possibly preliminary designs related to Blake’s Napoleon. 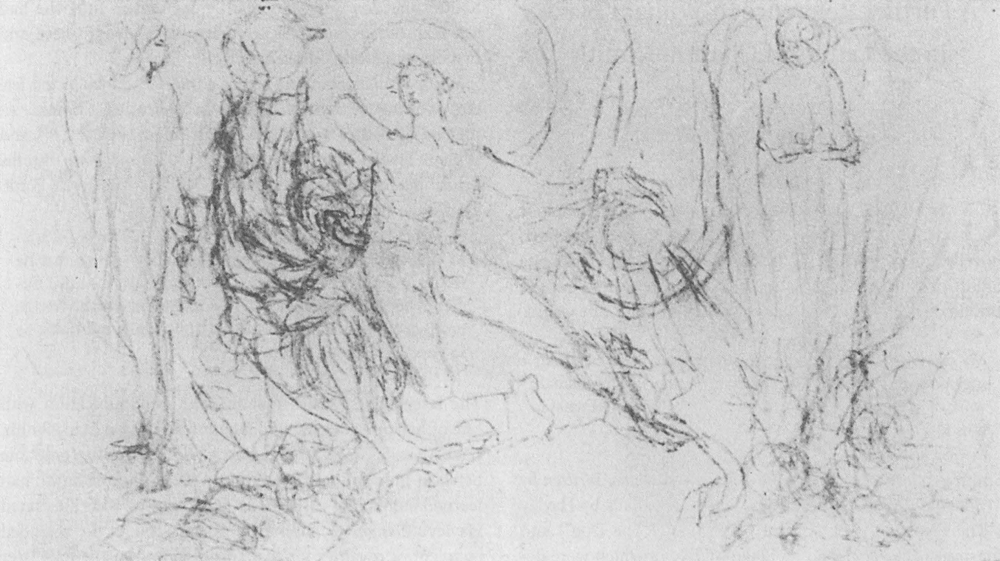 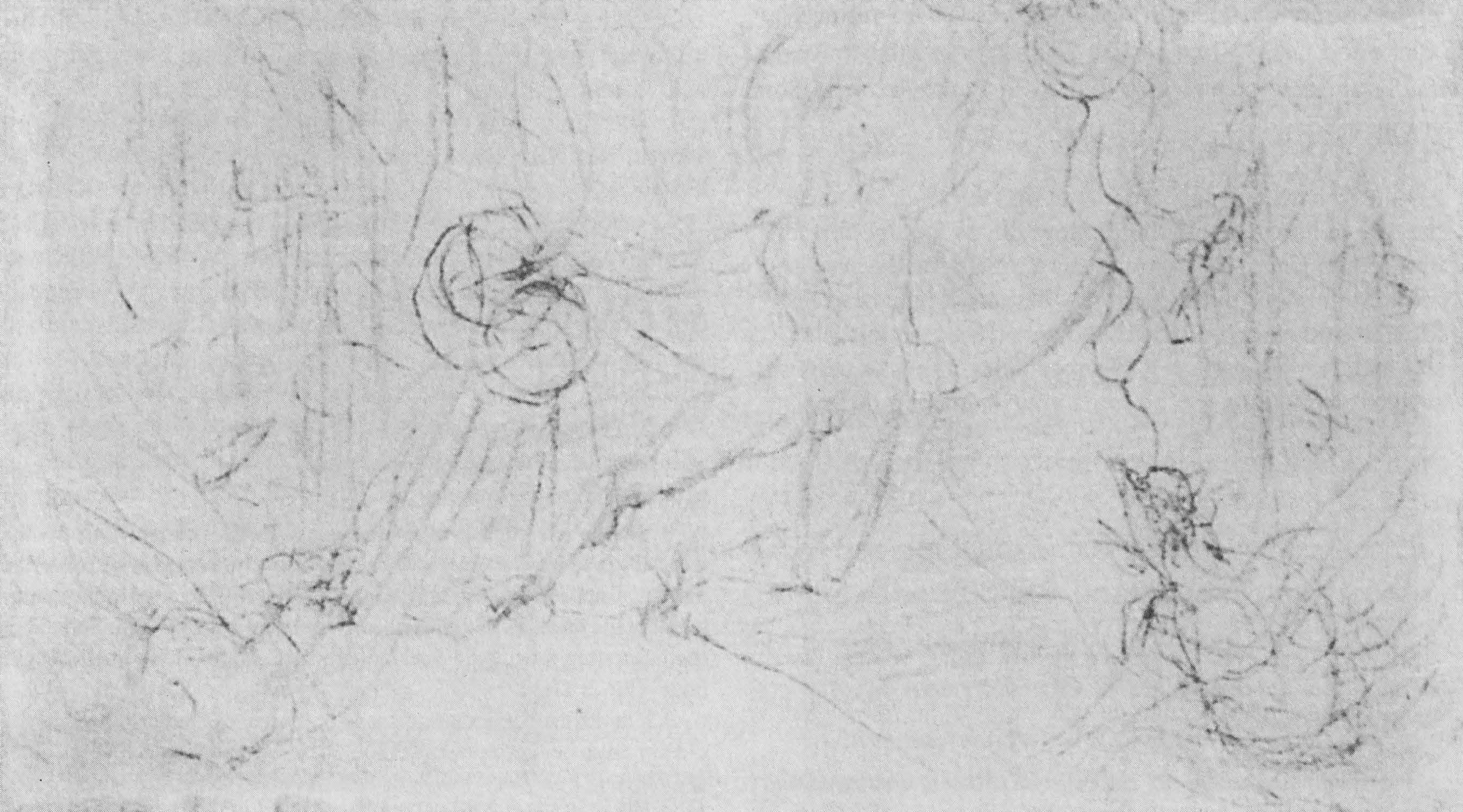 Recto (above) and verso (below) of Blake’s sketch, reproduced by kind permission of Giuliano Ceseri.   The recto is from Butlin, The Paintings and Drawings of William Blake (New Haven: Yale University Press, 1981), plate 828, and the verso from Butlin, “Two Blakes Reappear and Make Three,” Blake 18.2 (fall 1984): 119, by permission of the author. The original is at the Georgia Museum of Art, which is currently closed for renovation and not accepting requests for photography.