ONE of William Blake’s most enigmatic designs relates to his figure of Nebuchadnezzar in plate 24 of The Marriage of Heaven and Hell, c. 1790 (illus. 1). Although several graphic sources may have influenced Blake’s conception of Nebuchadnezzar,1↤ 1. Martin Butlin calls attention to Albrecht Dürer’s engraving of “The Penance of St. John Chrysostomus” in The Paintings and Drawings of William Blake, 2 vols. (New Haven: Yale University Press, 1981) #301, pl. 393. Anthony Blunt in “Blake’s Pictorial Imagination,” Journal of the Warburg and Courtauld Institutes 6 (1943): illus. 60b, points to a werewolf woodcut by Lucas Cranach. Additionally, Kenneth Clark, The Romantic Rebellion: Romantic versus Classic Art (New York: Harper & Row, 1973) 168, observes that “there can be no reasonable doubt that it derives from a German engraving, probably a wood-cut illustration of a werewolf by Cranach, although there is some evidence of an earlier prototype” (also quoted in Morris Eaves, Robert N. Essick, and Joseph Viscomi, eds., William Blake: The Early Illuminated Books [London: Tate Gallery/Blake Trust, 1993] 139). a suggestion of more than 130 years ago, begin page 76 | ↑ back to top now tracked to its origins, crucially adds to such a corpus of speculation.

Anthony Blunt in “Blake’s Pictorial Imagination,” assessing details of Blake’s graphic derivations, makes reference to S. Foster Damon’s William Blake: His Philosophy and Symbols, in which Damon mentions Frederick York Powell’s comments in the Academy (16 January 1875).2↤ 2. Blunt, “Blake’s Pictorial Imagination” 203n6; Damon, William Blake: His Philosophy and Symbols (Boston: Houghton Mifflin, 1924) 328; Powell, “Blake’s Etchings,” Academy 7 (16 Jan. 1875): 66. Powell, a scholar at Christ Church, Oxford,3↤ 3. Powell (1850-1904) became Regius Professor of Modern History in 1894. An enthusiast of French poetry as well as a connoisseur of Japanese art, he was a stimulating teacher and sufficiently prominent to be featured in a caricature that appeared in Vanity Fair for 21 Mar. 1895. categorically asserts that the “figure of Nebuchadnezzar in The Marriage of Heaven and Hell is without doubt derived from Plate 146 [i.e., 148, see note 10, below] of The Bible Commentary (Richard Blome, 1703).”

Damon, however, adds that he was “unable to see this volume” and, curiously, almost two decades later, Blunt was “unable to trace a copy.” The difficulty in locating the work was occasioned by Powell’s casual bibliographical reference, for in point of fact he referred to the voluminously illustrated English edition (9″ × 7¼″) of Nicolas Fontaine’s The History of the Old and New Testament (1703), which was published by Blome, one of the most active publishers in post-Restoration London. Powell, as Damon notes, further declares that the illustration of Nebuchadnezzar “was probably drawn by G. Freeman and engraved by some Dutch or Flemish engraver, as is the case with most of the plates in the same volume.” Blome’s 1703 edition of Fontaine includes engravings by Michael van de Gucht, Frederick Hendrick van Hove, Johannes Kip, and Peter Paul Bouche.4↤ 4. I am indebted to Eric White of Southern Methodist University’s Perkins School of Theology, Special Collections Department (Bridwell Library), for his extensive assistance in supplying digital photographs of the 1703 and 1705 editions of Fontaine (the library also possesses a copy of Blome’s 1691 edition) and for answering numerous inquiries concerning the volumes in question. I also wish to thank Mary Nelson, library assistant for the Special Collections Department at Wichita State University, for her assistance in providing information on the 1691 edition. I owe a further debt of gratitude to Debra Madera, Special Collections reference assistant, Pitts Theology Library, Emory University, for clarifying many details concerning the original French edition as well as the 1703 English edition.

Significantly, the frontispiece of the 1703 edition in the collection of Pitts Theology Library, Emory University, illustrates an allegorical vignette of events in the Bible by “G Freman,” engraved by “J. Kip.”5↤ 5. Freman’s vignette in the 1703 edition in Pitts Theology Library in part portrays two horizontally positioned angels kissing among clouds in the mid-heavens, distantly reminiscent of Blake’s nude kissing figures among clouds on the title page of The Marriage of Heaven and Hell. Johannes Kip (1653-1722) was 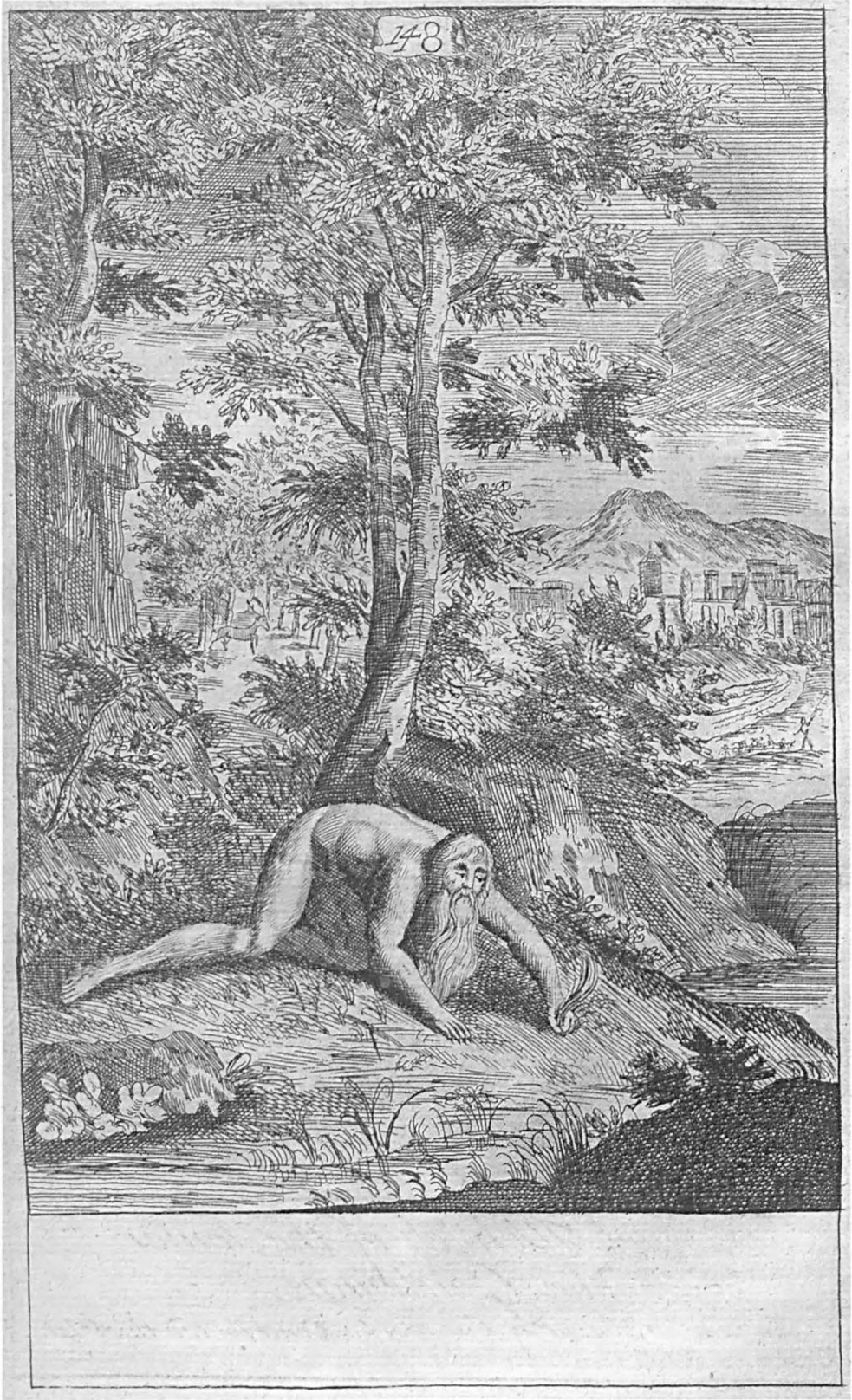 2. [Nicolas Fontaine], The History of the Old and New Testament (1703), pl. 148. 6 ⅞″ × 4 ⅛″. Reproduced by permission of Bridwell Library Special Collections, Perkins School of Theology, Southern Methodist University.
a Dutch engraver who lived in London. “G. Freman” (sometimes “Freeman”) was a recognized artist of the period, and a “Mr. Freeman” is mentioned on the title page of Blome’s 1691 edition.6↤ 6. The English version of the New Testament appeared in 1688, followed by the Old Testament in 1690. The combined English edition appeared in 1691. The title page of the 1691 edition records that the volume was “Translated from the works of ... le Sieur de Royaumont,” a pseudonym of Nicolas Fontaine, a French scholar who composed his biblical commentary while he was confined in the Bastille for unorthodox religious sympathies.7↤ 7. Fontaine’s volume, L’histoire du Vieux et du Nouveau Testament, was first published in French in 1670, with hundreds of illustrations (prints slightly smaller than the later English editions). The volume became popular throughout Europe. begin page 77 | ↑ back to top Fontaine’s work became one of the important influences relative to the Protestant Reformation in France.

The rare 1691 volume, as preserved in the Special Collections Department of Wichita State University, was published in “LONDON” and “Printed for and sold by Richard Blome” (emphasis per title page), and the contemporary binder’s spine title for this volume was “Blame’s Hist. of the Bible” (cf. Powell’s reference to “The Bible Commentary”). Blome was preeminently associated with the initial English translation of Fontaine’s work, and he and his copublishers were instrumental in popularizing the translation.8↤ 8. Blome early on became the signal publisher of Fontaine’s English editions. The 1703 volume is identified as the third edition, “Printed for S. and J. Sprint, C. Brome [R. Blome?], J Nicholson, B. Tooke, T Leigh and D. Midwinter.” There are also other editions that record the same publishing constellation. A photographic facsimile (which I have not seen) of the 1701 folio edition (16″ × 11″), printed for Blome, Sprint, Nicolson, and Pero, has recently been published (2008). The 1701 edition is described as a second edition, enlarged and corrected. Many editions, some abbreviated, by various publishers, appeared in the decades that followed. The 1691 English edition was copiously illustrated (424 pages of text, with 236 “sculptures” [engravings] on 216 leaves), as were the 1703 and 1705 editions (though with minor variations in the number of plates). Thus, Blake could have seen the figure of Nebuchadnezzar in the 1691, 1703, or 1705 edition (as well as in other intervening—or later—editions).

King Nebuchadnezzar, his “mind hardened in pride” (Daniel 5.20), was forced into the wilderness, where like “beasts of the field” he ate “grass as oxen” while his “hairs” were transformed into “eagles’ feathers” and his “nails” formed into “birds’ claws” (Daniel 4.32-33).9↤ 9. Italics in the King James version signify editorial clarifications of meaning or context. Prideful Nebuchadnezzar’s sanity was restored after seven years, and he became a more tractable ruler. In Blame’s 1703 edition, plate 148 (a number at the top of the plate—an integral part of the engraving, as also in the 1691 edition)10↤ 10. Powell, in his note in the Academy, erroneously identifies the plate in the 1703 edition as “146,” due to faulty transcription, a bad memory, or an error in printing. illustrates an uncrowned,11↤ 11. Blake added a crown to Nebuchadnezzar’s head in pl. 24 of The Marriage as a form of emblematic identification, for no reference is made to this biblical ruler in The Marriage. long-bearded and nude (i.e., featherless)12↤ 12. The original French edition of 1670 portrays Nebuchadnezzar with body hair, but no feathers per se. Although the image of Nebuchadnezzar in the wilderness in this French edition (with crossed tree trunks) influenced the plate that appeared in the Blome publications, in the English editions Nebuchadnezzar is given central prominence, while in the French volume he is consigned to the lower left portion of the plate, face down, eating grass, proceeding from right to left. Nebuchadnezzar, crawling (left to right) in a vast wilderness, his face looking outward, with crossed tree trunks in front of a mound in the immediate background (illus. 2; no artist’s or engraver’s name appears on the 1703 plate, nor in fact in any of the editions under discussion).13↤ 13. Though there is no specific mention of Nebuchadnezzar on pl. 148 of the 1703 edition, the heading on the preceding page declares: “Nebuchadnezzar turned into a Beast. I Nebuchadnezzar the King, by a just Punishment from GOD for his / Pride and Arrogance, is changed into a Beast” (phrasing also used in the 1691 edition). The blank space at the bottom of the plate indicates that it was unsponsored (most of the plates in the 1703 edition were dedicated by individuals, including several by Blome). Nebuchadnezzar was not a particularly popular subject among painters and illustrators of the Bible. 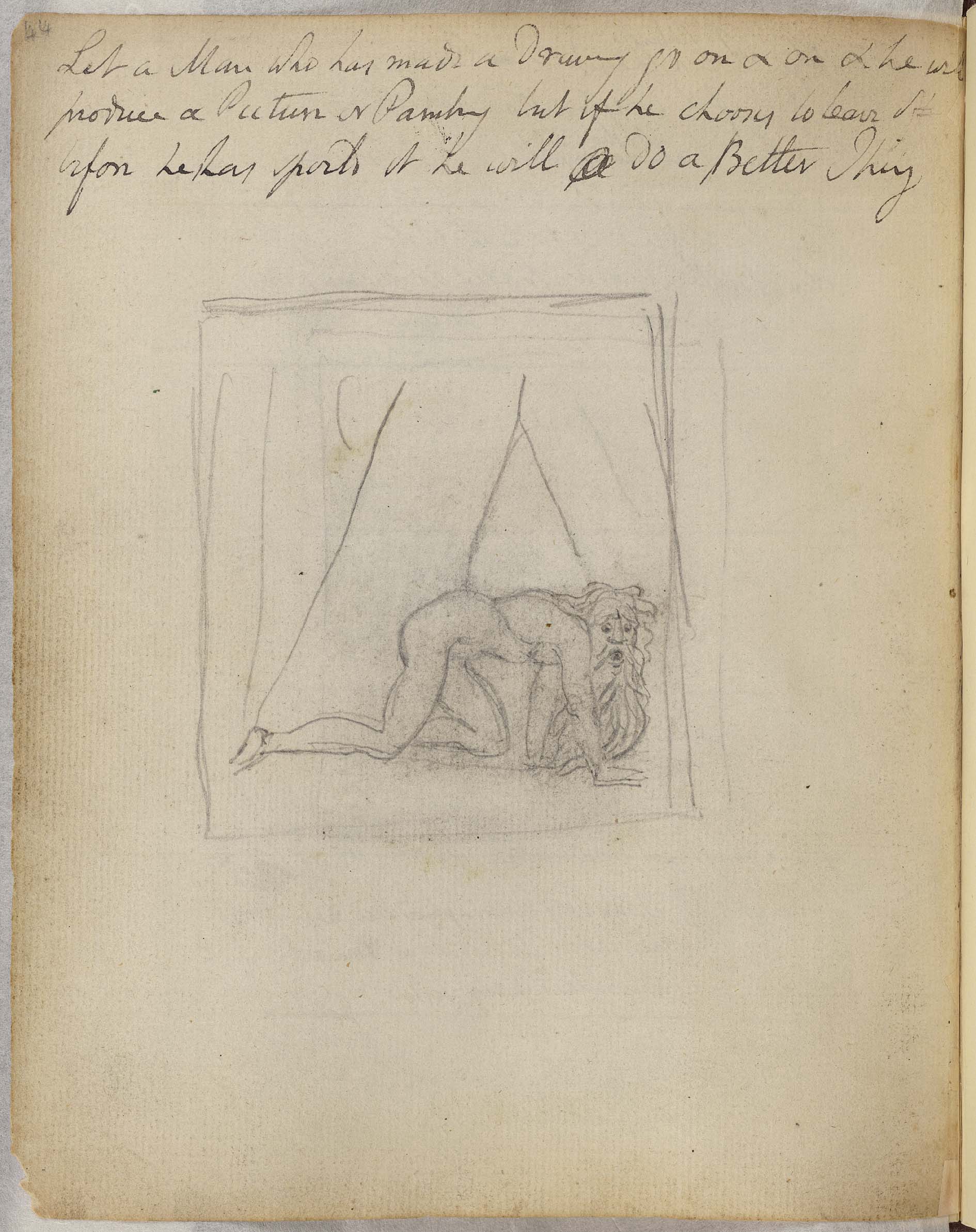 3. Blake, Notebook p. 44. Sketch c. 3 ½″ × 3 ¼″. © British Library Board. Add. MS 49460.
In Blake’s tightly focused original pencil sketch in his Notebook (p. 44), an agonized nude Nebuchadnezzar with streaming mustache and long beard, his face directed to the viewer, crawls from left to right, while pronounced crossed tree trunks are indicated in the immediate background (illus. 3).14↤ 14. A smaller emblematic version of Nebuchadnezzar on p. 48 (2″ × 1¾″), probably executed after the larger figure on p. 44, is “crowned with leaves” (see The Notebook of William Blake: A Photographic and Typographic Facsimile, ed. David V. Erdman with the assistance of Donald K. Moore, rev. ed. [(New York): Readex Books, 1977], illus. N48). In this smaller sketch a nude Nebuchadnezzar, crawling left to right, appears with massive crossed tree trunks in the background. Two copies of The Marriage in the William Blake Archive clearly indicate crossed tree trunks in Blake’s design of Nebuchadnezzar: copy C, 1790 (Morgan Library and Museum) and copy G, 1818 (Houghton Library). Blake’s large version of Nebuchadnezzar as a separate color print also indicates abstract crossed tree trunks in the background. Blake emphasized the bloody veins on Nebuchadnezzar’s nude body in his color print, iconography supported by the fact that Daniel (3.13) speaks of King Nebuchadnezzar’s incessant “rage and fury,” pertinent to Blake’s allegory wherein wrath generates nervous tissue. Blake’s Nebuchadnezzar on plate 24 of The Marriage, however, begin page 78 | ↑ back to top proceeds from right to left (perhaps because the Notebook sketch was reversed in the etching process).15↤ 15. In the 1705 folio edition of Fontaine (Bridwell Library, 18″ × 12″), the plate of Nebuchadnezzar was reengraved, hence reversing the perspective of the 1703 print. The 1705 engraving (13″ × 8″) is numbered “146,” though the number was added as a separate script in space provided at the bottom of the plate, rather than at the top as in the 1703 edition. The 1705 folio engravings are larger copies of the 1703 edition, all reengraved (some reversed, some not). The reengraved plates in the 1705 edition are slightly more sophisticated, presenting more drapery detail and the development of facial characteristics.

Considering artist-engraver Blake’s profound interest in the Bible and his predilection for utilizing themes from other artists, Fontaine’s frequently published, profusely illustrated English editions (as published by Blome) presumably would have been of some interest.16↤ 16. For a historical perspective on Nebuchadnezzar in relation to the English political scene of the 1790s, see Miner, “Blake’s London: Times and Spaces,” Studies in Romanticism 41 (summer 2002): 284-86. Thus, Frederick York Powell’s conjecture concerning Nebuchadnezzar presents an early candidate for one of several sources that potentially influenced Blake’s pictorial imagination.