Illustration for: Blake in the Marketplace, 2011 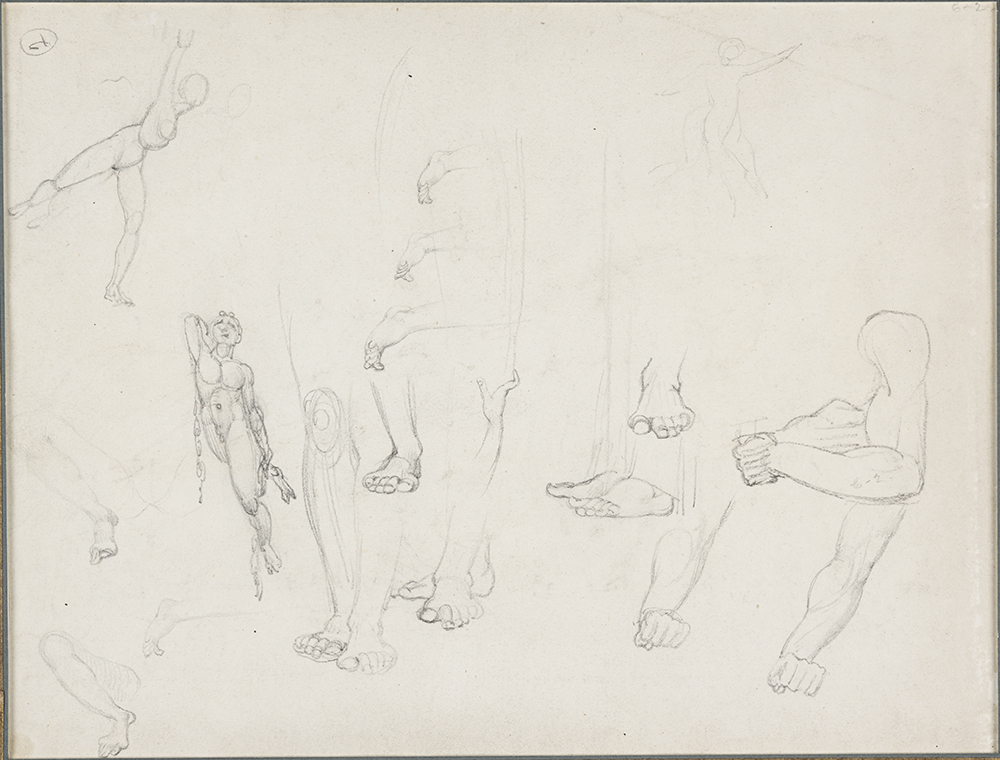 As Butlin indicates, several of these sketches relate to America a Prophecy and thus can be dated to 1793, the year that illuminated book is dated on its title page, or to late 1792. In the drawings that probably served as direct preliminaries, right and left are the reverse of the etched motifs in impressions of America pls. and thus these drawings have the same orientation as the images on the copperplates. This is what we generally find with preliminary sketches for Blake’s relief etchings, whereas the drawings for his white-line etchings, such as Sketch for “Jerusalem,” Plate 26: Hand Appearing to Jerusalem (Butlin #566), were transferred face down onto the copperplates and thus have the same right/left orientation as impressions.

The rising male with short chains dangling from him is clearly the preliminary drawing for the figure upper left in America pl. 5. The running female with right arm raised (top left corner in the drawing) appears lower left on the same pl. Light pencil lines indicate that Blake (first?) drew this figure’s head further to the right, her raised right arm further to the left, and her right leg in a slightly lower position. The hand and arm near the center of the sheet are very close to the right hand and arm of Urizen on America pl. 10 and to the left arm and hand of Orc on pl. 12. Butlin relates the slight sketch of the figure top right to the soaring female upper right on the America title page, but the association is rather loose because of differences in leg position. In the drawing, the figure appears to have 3 legs, probably because Blake is experimenting with different positions for her limbs. The pencil lines delineating this figure and the 2 long vertical lines to the left, possibly the trunk of a tree with a limb arching downwards on its left side (the limb curves downwards above the highest leg and foot, terminating just left of the foot), are much lighter than other lines on this side of the leaf—and less carefully executed. It is tempting to suspect that these light-line motifs were created with a different pencil, perhaps at an earlier date.

The 2 studies of bent legs, lower left, are similar to the legs of the seated youth on America pl. 8, in turn a repetition of the man on The Marriage of Heaven and Hell pl. 21. As Butlin points out, these have the same right/left directions as in impressions. For that reason, I suspect that they were not direct preliminaries for either of the relief etchings. If the legs predate The Marriage of 1790, then they were very probably executed before the America sketch of the rising figure with chains. Their position on the leaf, however, suggests that they were drawn after (although perhaps immediately after) motifs closer to the center of the paper. A sketch of a lower right leg and foot, above and to the right of the lower of the 2 drawings of bent legs, may be related to this group of leg studies.

Butlin associates the 3 studies of arms with fists, lower right, with the man clenching his head lower right on America pl. 6, but here again the drawings are not direct preliminaries. The pair of feet extending below the hem of a gown, carefully drawn just right of the base of the tree, may be a precursor to the single visible foot of the gowned man in Europe pl. 11. The other studies of feet are similar to a good many in the illuminated books of 1790-94, but these relationships are probably generic. Taken together, the drawings on this leaf suggest that they may not have been executed with a particular image in America (or any other illuminated book) in mind. Rather, all were executed as first thoughts on paper and as a way of assembling a pictorial vocabulary of anatomical and gestural forms for future use, whenever and wherever such use became appropriate in Blake’s estimation. When he borrowed from this image bank, he sometimes repeated a motif with little alteration, executing it with acid-resistant varnish on a copperplate much as he had done earlier with pencil on paper. In other instances, he modified the image considerably, its repetition thereby evolving into a reinvention. Perhaps neither procedure necessitated a literal return to these sketches, the stock of motifs they represent having been internalized.