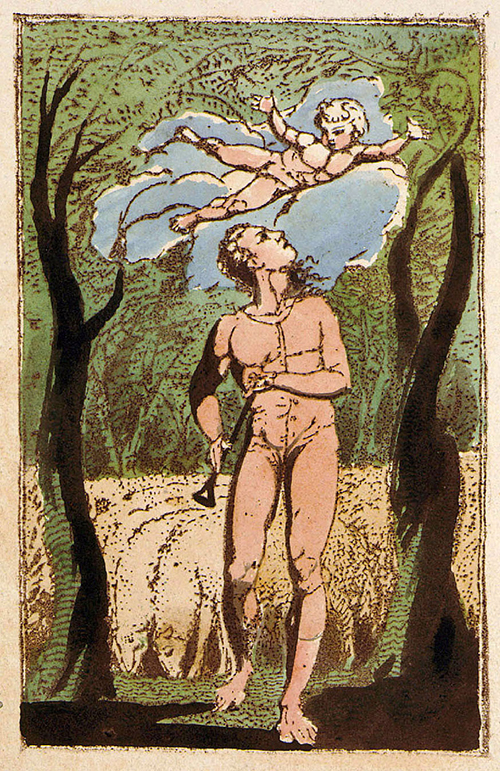 Northrop Frye was, so far as I can find, the first critic to shine a light on the Greek poet Hesiod’s influence upon William Blake. Specifically, Frye judged the divine characters Tharmas and Enion from The Four Zoas (c. 1796) to be “probably the Thaumas and Eione of Hesiod’s Theogony.”Northrop Frye, Fearful Symmetry: A Study of William Blake (Princeton: Princeton University Press, 1947) 284. Kathleen Raine, following upon Frye, in turn detected the Theogony’s presence in Blake’s The Book of Urizen (1794),Kathleen Raine, Blake and Tradition, 2 vols. (Princeton: Princeton University Press, 1968) 1: 415n28; see also 2: 90. and recently Paul Miner has uncovered significant Hesiodic allusions in The Book of Ahania (1795).Paul Miner, “The Influence of Hesiod’s Theogony on Blake’s The Book of Ahania,” Notes and Queries 56 (2009): 361-64. The Theogony’s influence can similarly be traced in the divine struggles described in the continental prophecies America and Europe (1793, 1794).

Blake would likely have read Hesiod’s eighth-century genealogy of the gods in Thomas Cooke’s English translation (1728),Thomas Cooke, trans., The Works of Hesiod (1728), 2nd ed. (London: Printed by John Wilson for John Wood and Ch. Woodward, 1740; T. Longman et al., 1743). On Cooke’s achievement, see Stuart Gillespie, “Hesiod Goes Augustan: An Early English Translation of the Theogony,” Translation and Literature 17 (2008): 197-209. See also Sir Charles A. Elton’s criticisms of Cooke in his Remains of Hesiod the Ascraean Including “The Shield of Hercules” (1809), 2nd ed. (London: Baldwin, Cradock, and Joy, 1815) iii-xiv. In addition to Cooke’s English rendering, Thomas Robinson’s Greek/Latin edition, Hēsiodou tou Askraiou ta heuriskomena; Hesiodi Ascraei quae supersunt, cum notis variorum (Oxford, 1737), would also have been available to Blake, but beyond his abilities at the time as a reader in either language. On Blake’s later mastering of Greek and Latin, see his letter of 30 January 1803 (E 727). the first, and have found there a useful source not only for the names and attributes of those Greek deities but also for conceptualizing their generational struggles. Joseph Wittreich, Jr., argues that the Theogony in fact “provides the best introduction to the large design of Blake’s own mythology.”Joseph A. Wittreich, Jr., Angel of Apocalypse: Blake’s Idea of Milton (Madison: University of Wisconsin Press, 1975) 246. To read Hesiod alongside Blake is indeed to witness the resemblances between their theogonies of differentiation, desire, patriarchy, and revolt,See Norman O. Brown, trans. and introd., Hesiod, Theogony (New York: Prentice Hall, 1953) 15. with Blake’s Orc cycle of “regicide and revolution”Frank M. Parisi, “Emblems of Melancholy: For Children: The Gates of Paradise,” Interpreting Blake, ed. Michael Phillips (Cambridge: Cambridge University Press, 1978) 86. See also Julia M. Wright, Blake, Nationalism, and the Politics of Alienation (Athens: Ohio University Press, 2004) 44. distinctly mirroring the Theogony’s lineage of repression and revenge between Uranos and his son Kronos and then between Kronos and Zeus. “Urizen,” the punning name of Blake’s tyrannical creator god, aptly recoins the appellation of Hesiod’s Uranos as well as the similar-sounding ourizein (Greek “to bound”) and perhaps even offers up a patrilineal portmanteau of Uranos and Zeus.

Before composing the Songs’ leadoff poem and quasi-exordium, Blake may have paused over Cooke’s translation of these lines from the Theogony’s prooimion, describing Hesiod’s poetic ordinationSee Milton, Paradise Lost 4.674-78; Theocritus, Idylls 1, 7; Callimachus, Aetia 1: 1, 2; Virgil, Eclogues 1, 4, 6; Petrarch, Eclogues 3. Only Hesiod’s original account provides the specific details of investiture and vocation. See also Blake’s engravings for John Flaxman’s Compositions from the Works Days and Theogony of Hesiod (c. 1817), including “Theogony” and “Hesiod and the Muses” (William Blake Archive, Commercial Book Illustrations, Flaxman, Compositions, objects 21 and 22). by the Muses of Mount Helicon:

So spoke the maids of Jove, the sacred nine,
And pluck’d a scepter from the tree divine,
To me the branch they gave, with look serene,
The laurel ensign, never fading green:
I took the gift with holy raptures fir’d,
My words flow sweeter, and my soul’s inspir’d …. (47-52)All quotations from the Theogony follow Cooke’s English translation in the 2nd edition (see note 5, above). My readings have also been informed by Hugh G. Evelyn-White’s Greek/English edition, Hesiod, The Homeric Hymns and Homerica (1914; Cambridge: Harvard University Press, 1982), as well as by M. L. West’s translation in “Theogony” and “Works and Days” (Oxford: Oxford University Press, 1988).

In words that may resonate in the introductory poem of Songs of Experience, whose bard the “Present, Past, & Future sees” (line 2, E 18), Hesiod proceeds to relate how, upon his investiture,

Before my eyes appears the various scene
Of all that is to come, and what has been.
Me have the Muses chose, their bard to grace,
To celebrate the bless’d immortal race;
To them the honours of my verse belong;
To them I first and last devote the song:
But where, O where, inchanted do I rove,
Or o’er the rocks, or thro the vocal grove! (53-60)

The “Introduction” to Songs of Innocence specifically echoes this narrative of receiving from the immortal Muses a freshly “pluck’d” laurel branch turned “scepter” (Greek skeptron, “staff”) and bardic “ensign.” Blake also writes of “piping songs” in “valleys wild”—a possible nod both to Hesiod’s Boeotian wilds and to the valleys below Helicon—and of thereupon having been inspired by a divine muse-like presence envisioned as a godlike child atop “a cloud” (lines 1-3). The child first commands him, “Pipe a song about a Lamb,” but then bids the pastoralist, who in the Songs’ frontispiece stands before a contented flock, to “drop thy pipe” and sing words to that tune (5, 9-10). Finally, the cloud-child requests the singer to “write” the song “in a book that all may read” (13-14). (Appropriately, one of the Songs is of course entitled “The Lamb.”) As in the Theogony, this introductory scene of divine investiture thereby presents the “story of an inspired origin,”Angela Esterhammer, Creating States: Studies in the Performative Language of John Milton and William Blake (Toronto: University of Toronto Press, 1994) 130. which is to say an etiological account both of the proem itself and of the verse to come.

The more obvious allusion to Hesiod’s prooimion follows upon the child’s sudden disappearance:

So he vanish’d from my sight.
And I pluck’d a hollow reed.

And I made a rural pen,
And I stain’d the water clear,
And I wrote my happy songs
Every child may joy to hear. (15-20)

Like Hesiod, Blake’s wandering speaker figures himself as a poet with this “pluck’d” piece of flora, and although there are evident differences (the piper makes of his reed not a staff but a pen, self-picked rather than bestowed), the ceremonial act likewise invests the piper with the powers of poetic composition and with the authority to sing. In short, like Hesiod, Blake’s piper is confronted by a figure of inspirationSee John H. Jones, Blake on Language, Power, and Self-Annihilation (New York: Palgrave Macmillan, 2010) 23: the cloud-child functions “as a muse figure, a voice external to the piper’s own that aids in the production of the poem,” the latter thus being “dialogically inspired.” Jones grants the “Introduction” considerable discursive importance, as does Esterhammer (124-32). and transformed into a poet by that experience, gaining a new poetic, pointedly prophetic vocation and the accompanying material insignia of this art.

What these various allusions to the Theogony arguably most illuminate is the Songs’ own emphasis upon the divine: being hailed by an inspiring muse to sing of what Hesiod devotedly calls the “bless’d … race.” Suitably, Blake’s child floats aloft angelically, and the commanded song “The Lamb” itself turns upon the theogony of Christ made human child and sacrificial lamb. For all their irony and pathos, other of the Songs—“The Little Black Boy,” “The Chimney Sweeper,” “The Little Boy Found,” “Night,” “A Cradle Song”—similarly point toward the divine and its relationship to the human. So, for example, one adult speaker “trace[s]” the “holy image” in his sleeping child’s face, and recalls that “thy maker” once “wept for me for thee for all, / When he was an infant small. / Thou his image ever see, / Heavenly face that smiles on thee” (“A Cradle Song,” lines 22-28, E 12). Blake’s poet writes songs for children, as divinely bidden, but in doing so he praises “the human form divine” (“The Divine Image,” line 15, E 13). And although his printed book will itself do Hesiod’s itinerant traveling, a muse has authorized its production, and it is to the Muses that Blake’s book of songs implicitly is dedicated, answering the child-muse’s special request of “a book that all may read.”See W. J. T. Mitchell, “Visible Language: Blake’s Wond’rous Art of Writing,” Romanticism and Contemporary Criticism, ed. Morris Eaves and Michael Fischer (Ithaca: Cornell University Press, 1986) 46-86, esp. 55.

By taking stock of Blake’s allusions to Hesiodic investiture, readers are thus less likely to misjudge the “Introduction” as merely presenting a piper who “has no duty.”Gillham 149. Instead, they find a poet who traverses the world of experience in his divinely ordained vocation of prophetic duty and poetic labor, both of which can and should be distinguished from the pastoral otium of Theocritus, Moschus, and even Virgil.See David Wagenknecht, Blake’s Night: William Blake and the Idea of Pastoral (Cambridge, MA: Belknap Press, 1973) 13-14, 69, and Joseph Wicksteed, Blake’s Innocence and Experience: A Study of the Songs and Manuscripts (New York: E. P. Dutton, 1928) 81. As in the Theogony, the Songs’ muse prompts in the wanderer a newfound talent for singing as well as a prophet’s duty to perform and communicate,See Brown 35. See also Claude Calame, Masks of Authority: Fiction and Pragmatics in Ancient Greek Poetics, trans. Peter M. Burk (Ithaca: Cornell University Press, 2005) 92, and Kathryn A. Morgan, Myth and Philosophy from the Pre-Socratics to Plato (Cambridge: Cambridge University Press, 2000) 74: “the inspiring power endows the poet with the ability that he then uses to create songs in his own voice.” to clarify the cosmos of the human-divine: “stain[ing] the water clear” for all who’ll “hear.”For an early glossing of the “stain” as that of materialization via art, from “Ideal Song” to written book, see Howard Justin, “Blake’s ‘Introduction’ to Songs of Innocence,” Explicator 11 (1952): item 1. See also William R. Bowden, “Blake’s ‘Introduction’ to Songs of Innocence,” Explicator 11 (1953): item 41; Glen 65-66; Edward Larrissy, William Blake (Oxford: Blackwell, 1985) 27; Mitchell, “Visible Language” 55-56; Jones 51; and Esterhammer 129-30.

When he wrote the Songs of Innocence, Blake might have believed, as he proclaimed some years later, that the ancient Muses were only “daughters of Mnemosyne, or Memory, and not of Inspiration or Imagination” (A Descriptive Catalogue [1809], E 531; see also Milton a Poem [c. 1804-11], pl. 1, E 95). But, as Robert Lamberton points out, although Homer and other early Greek poets invoke the Muses solely to recollect the past, the Theogony’s daughters of memory “are more ambitious and in a sense are on the way to becoming the daughters of inspiration Blake invoked to replace them.”Robert Lamberton, Hesiod (New Haven: Yale University Press, 1988) 65. Blake’s poet-singer, like Hesiod’s poet persona, sings of and for his muses, and in doing so recounts and affirms his bequeathed aspiration.E. D. Hirsch, Jr.’s Innocence and Experience: An Introduction to Blake (New Haven: Yale University Press, 1964) thus rightly contends that the piper’s “Panlike occupation … presents a contrast with his serious and dedicated occupation at the [poem’s] end,” that “of making poetry out of such inspiration” (173). For his poetic “Inspiration” Blake looked back not only to the Bible’s prophets but also to a classical lineage extending directly from Hesiod’s Theogony. That visionary line leads us to Blake’s mythological prophecies of the 1790s and also, to judge from the “Introduction,” to the earlier Songs of Innocence and its piper made bard.