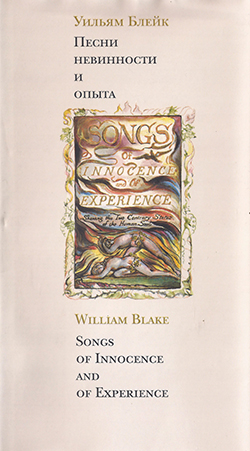 In 2009 one of the largest Russian museums, the Pushkin State Museum of Fine Arts, joined with the Tate and the British Council to begin to organize a Russian exhibition of Blake’s works for the first time ever; it opened in November 2011 [see review]. The British Council also suggested that a new translated edition of Songs of Innocence and of Experience should be published on the occasion. The Russian State Library for Foreign Literature partnered with the council to organize the workshop of translators and publish the book. The publication is unusual for Russia in that it is based on an earlier boxed small-format edition issued by the Folio Society (1992), later republished unboxed by Tate Publishing in 2006 and 2009. For the first time in Russia, this edition reproduces the illuminated prints of the Songs, and all translations are new, the result of a competition among members of the translation workshop. The translations judged most successful were included alongside the images, with introductions by Richard Holmes and Gregory Kruzhkov as well as critical commentary by Sasha Dugdale. The translations presented in the book represent a modern vision of Blake and successfully compete with a number of classical translations of Blake into Russian, such as those by S. Ya. Marshak, S. Stepanov, and others.

In a general introduction, which is translated by S. Lichacheva from the Folio Society edition, Holmes declares: “Blake uses the modality of children’s verses to create a wholly adult poetry”; this essay, though brief, provides a biographical sketch and points the way into the cycle of poems. Kruzhkov’s preface introduces the reader to the history of Russian translations of Blake, in particular those of Songs of Innocence and of Experience. The commentary by Dugdale clearly describes in detail the metaphorical and symbolic patterns of Blake’s poetry. Previous Russian editions of Blake sorely lack such commentary.

The color images, from the King’s College copy of Songs, for the first time allow the Russian reader to appreciate the originality of the syncretic nature of Blake’s gift—not only as a poet but also as an original artist and engraver. Although Russia already has bilingual collections of Blake’s poems, the originals have never before been reproduced graphically page by page.

The translations in the book do not, of course, contain a complete systematic interpretation of the imagery and melodic poetry of Blake, but they offer a sort of kaleidoscope of possible approaches to his poetry. And while every successful new translation is just a step in the direction of the original, the poems in this edition collectively represent much progress. It is also important that the format of the workshop allowed the translators to find multiple approaches to the same poems: the appendix to the edition gives interesting alternative translations not included in the main text. Thus, the Russian reader has the opportunity to consider disparate translations of poems, including three versions of “Holy Thursday,” “The Fly,” “Ah! Sun-Flower,” and “A Little Boy Lost.” Many of the new translations are clear successes that open for Russian readers new incarnations of familiar paired works by Blake, especially “The Lamb” by A. Kruglov and “The Tyger” by M. Lipkin, and “Infant Joy” by M. Falikman and “Infant Sorrow” by M. Kostionova. A general trend of these translations is to preserve the rhythmic spirit, as in the dance-like “The Ecchoing Green” (trans. M. Falikman) and “Laughing Song” (trans. S. Lichacheva), and the epic rhythm in “Earth’s Answer” (trans. A. Kruglov) and “The Voice of the Ancient Bard” (trans. M. Kostionova).

At the same time, striving to adhere to the original poetic form may lead to an inadequate interpretation of content. For example, in the “Introduction” to Innocence, translated by M. Kostionova, the third stanza introduces an angel appearing to a baby in a cradle, neither of which exists in the original! Examples can be multiplied, but we can say that the main purpose of publishing this translation—to let Russian readers escape from the shackles of traditional translations of Blake and bring their perception of Songs of Innocence and of Experience to a new visual level—has been achieved. This is definitely the most visually attractive edition of Blake in Russian, and may inspire more new approaches to making his works accessible to Russian speakers.