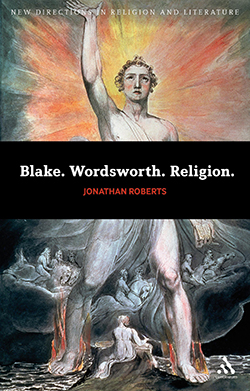 Blake. Wordsworth. Religion. is the third title in the New Directions in Religion and Literature series, published by Continuum Books. The earlier titles, The New Atheist Novel and Do the Gods Wear Capes?, give some sense of what these new directions might be. So it was comforting to see a stodgy title like Blake. Wordsworth. Religion., even though the scant 100 pages of the book seem undersized for its subject.

In fact, Jonathan Roberts has no intention of being comprehensive. Rather, he focuses on Blake’s verse letter to Thomas Butts, “To my Friend Butts I write,” and on the Solitary’s vision of the heavenly Jerusalem in book 2 of Wordsworth’s The Excursion, and uses them to demonstrate how poetry offers “a different type of engagement with religion: one that can enrich rather than narrow understanding, include rather than exclude, and creatively interrelate—rather than destructively set at odds—different approaches to religion” (1). In his introduction, Roberts describes his approach in some detail, calling it experimental and “unusual”: Chapter by chapter I present a range of different interpretive perspectives, many of which conflict with one another, and I do so without attempting to reconcile them systematically. … The conflict is not an analytical inadequacy that must be mastered …. Rather, the insoluble diversity of critical approaches to these writers is a mark of their poetry’s rich internal dialogue and hermeneutical plenitude. (3) Some of these “perspectives” “are recognizably academic,” he asserts, but others are not: I have also included non-scholarly voices, even when this inclusiveness means that some sections … are distinctly “unacademic”. My hope is that the different methodologies … will bring this diversity into focus without using any one approach to trump the others …. For this reason, I attempt to identify with each of these positions, but not exclusively with any single one of them. (3-4) So, according to the introduction, we are to expect a book that mixes the scholarly with the non-academic, one that does not develop a traditional argument, but instead explores the two poems from a variety of angles, without privileging any of them. And the aim is not so much to say something new about Blake or Wordsworth; rather, it is to use their poems as a way of exploring the nature of religious experience.

The subsequent chapters make it even clearer that this is not a scholarly book, in spite of Roberts’s occasional protestations to the contrary. Chapter 2, for instance, consists mainly of the texts of the Blake and Wordsworth passages he will discuss, prefaced by introductions of the sort one might find in an undergraduate anthology. Thus, in a book of about 100 pages of critical matter, fifteen percent of the text is devoted to introducing and supplying texts. When he proceeds to discuss them, he does so as promised, in a variety of ways. But is this, as Roberts insists, a “hermeneutical plenitude,” or is it something else? Chapter 4, for instance, “Autobiography,” purports to give an autobiographical account of a mescaline trip that happened somewhere between Windermere and Hawkshead—perhaps across the street from Beatrix Potter’s home in Near Sawrey. Roberts writes: Ever since that experience … I have had a new, continuing visual appreciation of all art forms, an appreciation which I did not have before. Moreover, I have realized that quite literally everything is Self, everything in the whole field of experience …. Since this realization, the mystical strand of Blake’s and Wordsworth’s poetry has a far clearer meaning to me than before. (46) This realization leads Roberts to take up the relationship of “Mysticism and Psychedelics” (the title of chapter 5), including a catalogue of famous writers and their experiments with mind-altering drugs, and we learn, eventually, that the earlier account of his mescaline trip was in fact a pastiche of Huxley, Ginsberg, Traherne, and one Christopher Mayhew, MP, and may not have been autobiographical at all (or maybe it was?). Then, having extolled the ways in which psychedelic drugs lead to mystical insight, Roberts abruptly changes tune in chapter 6 (“Theology”), asserting that, of course, drugs are bad: they “cause and sustain wars, lead to violence,” and so on—as if these were things his readers didn’t know. And here he leaves the texts of Blake and Wordsworth almost entirely out of the discussion, except to argue that the two weren’t really mystics anyway (at least according to R. C. Zaehner, and contra Evelyn Underhill, whom he cites extensively in chapter 5).

Ultimately, this kind of bait and switch is tiresome. Roberts wants to have everything as many ways as possible, teasing the reader, without engaging himself seriously with his announced subject. Which leads one to ask why the book was published at all, especially at such a prohibitively high price. I can imagine it as a pamphlet or chapbook, gracing the counter of a San Francisco bookshop in the late 60s, and read by a handful of locals on their way to the next Doors concert. But at $90 for the hardcover, about a dollar per page of critical prose, Continuum Books isn’t selling to that market: they are aiming at academic libraries and acquisitions librarians who see only a title. To my mind, this is deeply problematic. At least, advise your libraries not to order this book automatically, so that we do not become complicit in publishing ventures of this sort.