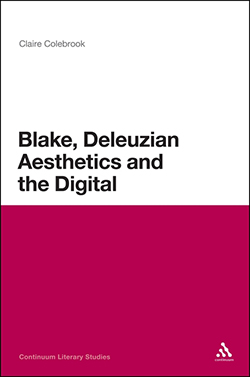 In Blake, Deleuzian Aesthetics, and the Digital, Claire Colebrook pursues the dual theoretical aims of exploring Blakean textual operations through Deleuzean aesthetics and of grounding Blake’s aesthetic commitments within the philosophical concepts associated with Gilles Deleuze. The result of this double procedure, while perhaps not pleasing to all Blake scholars, nonetheless discloses the continuing ability of the illuminated canon and its mythopoeic construction to absorb the most sophisticated critical modes without exhausting Blake’s evolving vision of subjectivity. In this sense, Colebrook’s well-written and energetic assessment joins a long tradition of theoretical discussions that find in the composite textual states in which Blake works connections to contemporary modes of analysis. As she states in her conclusion, “Two centuries of Blake criticism have followed from the working through of those moments in his poetry that are resistant to synthesis[,] with criticism having to repeat, master, narrativize, and trace the geneses of the inassimilable” (136). This historical reading of Blake criticism, as the preface to the work makes clear, emerges from the nature of Blake’s modes of production, where “there is both the art of marking, tracing, sculpting, and binding (or experience’s world of repeated, already-known and fully actualized matters) and the destruction of any system with an influx of pure powers (or the openness of innocence)” (xxv).

The digital evoked in the title relates to Blake’s textual states in at least two senses: the fate of the individuated process of textual production well known to Blake studies (where the hand and its digits enact the haptic as creative process) and the codification of this hapticity into digital modes of reproduction (which translates the unique analogical dimensions of any given work into a system for consumption). Blakean aesthetics, like that pursued by Deleuze, is positioned on this ontological fault line, and the Blakean text thereby “will rehearse … the inherent impossibility and destructiveness of digitalism, alongside digitalism’s persistent necessity” (xxxv). Certainly, one of the strengths of this book is its dedication to remain poised at this juncture, and another is its willingness to resist enacting a purely mechanical juxtaposition of Blake and Deleuze, which can be discerned in its swerve away from Deleuze into other forms of criticism (e.g., that practiced by Jerome McGann) in the later chapters. Through such a procedure, “tensions or seeming contradictions in Blake’s work” (xiv) become the center of concern for the emergence of a “transcendental empiricism” (142) that clearly anticipates Deleuze’s notion of a “pure immanence” in the work of the same title.

Colebrook’s attention to Blake’s mode of production begins with a recognition that much of his work explores the operations of “a destructive imagination” necessary to resist creative work simply inscribing “the same dull round of systemic repetition” while articulating an “individualized” textuality that resists a fall into “undifferentiated chaos” (2). What emerges, in her estimation, is a highly complex form of dynamic contraries beyond the binaries at work in Blake’s early canon (e.g., innocence and experience or reason and energy) “composed of a multiplicity of voices and transformations of single voices from redemptive vision to totalizing despair” that are both “diagnostic” yet “disturbingly undecidable” (6). Blake’s work achieves “the creation of an analog language” posited by Deleuze (in relation to the painter Francis Bacon) capable of resisting any easy translation into “systems that are not one’s own” (17, 21), which identifies it as a participant in “a counter-enlightenment tradition” (38) extending through Nietzsche to Deleuze.

The tracks of this tradition point toward an emphasis on the type of incarnation related to both the theme of Blake’s larger works and his evolving method of textual production, which unveil the tensions between bodies expressive of “an actual and richer difference” and the genesis of “bodies that cover over the fluxes of force” (45). As Colebrook argues, “This ambivalence regarding the status of the body and its matter is the very motor of Blake’s poetry and visual work” by exploring textually and exploring thematically “a productive undecidabilty [sic] whereby form is content” (47). This ambivalence is encoded in Blake’s work upon numerous planes of expression, whether in the aesthetics of the hand and the eye, the interplay between the body and the spirit, or the politics of history and the psyche, with Colebrook’s analysis consistently connecting these tensions to a wide range of Blake’s early and late prophetic poems. Some critics might argue that this perspective, to borrow Blake’s phrase about Swedenborg from The Marriage of Heaven and Hell, is thus only “a recapitulation of all superficial opinions” (E 43) filtered through Deleuzean aesthetics, yet I would argue that such an assessment is flawed. The analysis breaks open new critical spaces within which to probe Blake’s continuing, and indeed constantly evolving, relevance in a world increasingly dedicated to the digital and the erasure of the analogical precisely by connecting Deleuzean method to that of McGann’s theory of “texts as acts” (65) and Alain Badiou’s related view of text as event (67). Read in relation to both McGann and Badiou, the poem generally and Blake’s poetry in particular are “essentially open” (85).

Given the return of the psychoanalytic in romantic criticism, primarily through the work of Joel Faflak, the degree to which Blake composed “a symptomatology of the modes of life” (88) has achieved a new context and adds an intensified context for Colebrook’s analysis. The inward politics of the psyche and the outward politics of physical conflict, connected so intensely in the late illuminated prophecies, provide a vehicle to create in the poetic body “a performative contradiction” (92), which in Colebrook’s well-chosen phrase is not only “the very condition of poetry, [but] which is also the condition of life” (95). Such a view lends to Blake’s work a “counter-vitalist imperative” much needed in “the twenty-first century” (97). This emphasis on “life” assumes priority in the closing chapters of Colebrook’s book, which address Blake’s “[double-edged] attacks on modernity” (99) and become the primary means to assess the poet’s use of this counter-vitalist aesthetics as a corrective antidote to “the challenge of madness” (103) always lurking on the margins of the last prophetic works. The deployment of Deleuze, then, is also corrective of traditional forms of psychoanalytic criticism as applied to Blake’s work, since the often depressive pessimistic analytic modes of Freud and Lacan are supplemented by recent neuroscientific work to shift analysis toward “the true nature of life as affective, rather than cognitive” (113). This places in a better context the Blakean commitment to self-annihilation, a shift from “self-maintenance” toward “self-overcoming” (115), which opens onto the thoroughly Blakean view that “stresses that actual human being and all natural life are already eternal and infinite” (120).

As my review suggests, there is much to admire in Colebrook’s creative collision of Blakean and Deleuzean aesthetics, yet her analysis could also be considered somewhat problematic for the last generation of Blake scholars. Judging from the critical work put into play throughout the book, it would be easy to assume that this type of engagement is completely new, yet that would be an error in judgment and in research, since a number of Blake scholars, including myself, have sought to position the assessment of Blake upon this same theoretical ground. While the range of theoretical voices allows “the analog differences of variation to become audible within the digital system of phonemes” (139), Colebrook’s inattention to other, more recent critical analyses has ignored or overlooked precisely the same type of analysis in Blake criticism itself. One obvious location is Romantic Circles <http://​www.​rc.​umd.​edu>, which has a special issue dedicated to Romanticism and the New Deleuze (January 2008), and a number of other recent secondary studies have explored Blake’s work through analogous analytic frames of reference. With that said, Colebrook’s work is written with energy and insight and creates an enriched critical environment to judge anew Blake’s aesthetics and to account for the curious ability of Blakean modes of textuality to absorb almost any theoretical apparatus without exhaustion.