William Blake frequently turned to Francis Quarles’s Emblemes, 1635, for graphic and textual inspiration.All citations of Blake are from The Complete Poetry and Prose of William Blake, ed. David V. Erdman, newly rev. ed. (New York: Anchor–Random House, 1988). Scholars have particularly called attention to Blake’s evocative revision of Quarles’s multiplex emblem XV (book 1, pp. 60-63),See Mary Lynn Johnson, “Emblem and Symbol in Blake,” Huntington Library Quarterly 37 (1974): 156-60, and Judith Wardle, “‘For Hatching Ripe’: Blake and the Educational Uses of Emblem and Illustrated Literature,” Bulletin of Research in the Humanities 81 (1978): 340-41. Scholars such as Piloo Nanavutty (“Blake and Emblem Literature” [1952]) and Aquilino Sánchez Pérez (Blake’s Graphic Work and the Emblematic Tradition [1982]) have also recognized that Blake crucially was influenced by emblematic literature. See also Joseph S. Salemi, “Emblematic Tradition in Blake’s The Gates of Paradise,” Blake 15.3 (winter 1981-82): 108-24. a depiction—erroneously identified as part of book 2—that portrays Fraud as a malevolent female (“double fraud” with “her divided face”).In “then She bore Pale desire,” c. 1780-83(?), Blake concludes that “Guile & fraud” live “in the Smoke of Cities. on Dusky wing,” where each man’s “face” of self love is “a mask unto his heart” (E 448); he has in mind the emblem of Fraud in Cesare Ripa’s Iconologia, 1603, where a two-faced human vulture holds two hearts and a mask. A similar emblem is in George Richardson’s Iconology (based upon Ripa’s emblems), vol. 2 (London, 1779), fig. 386, text pp. 135-36, a work from which Blake borrowed graphic themes. Fraud therefore “does scourge and teare / Astræas wounded sides, [which are] plough’d up [like furrows], and rent / With knotted cords.”Flagellated Astræa symbolizes Justice; in classical mythology she perceives earth’s depravity and flees to the pristine heavens at the end of the Iron Age, becoming the constellation Virgo. Quarles inquires, “Has Justice now found wings?” (see winged Virgo in John Flamsteed’s Atlas Coelestis, 1729) and does “Justice see?” (presumably because Justice, from the fifteenth century, frequently was envisioned as blind). On the right side of the emblem, “Faiths pineons [are] clipt” with scissors by Sense (also personified as a female). Blake, however, alters Quarles’s theme in his emblem 11 for both versions of The Gates of Paradise, issued respectively as For Children (1793) and For the Sexes (c. 1825-26).Blake changes the sexes; in For Children a myopic ancient man as “Aged Ignorance” attempts to cut the wings of flamboyant Sense, a youth greeting the joys of the dawn. When Blake reissued this plate in For the Sexes, he added genitals to the body of this winged youth, symbolic of fleshly desire, along with the legend “Perceptive Organs [related to sight] closed their Objects close” (see Jerusalem 30.55-56, E 177). “Aged Ignorance” (recall “aged ignorance” who cants moralities in Europe 12.7-8, E 64) clips with a pair of scissors the wings of “all Sublunary Things” (“The Keys of the Gates” no. 11, E 268). In Quarles’s emblem Faith has “Her wings … clipt [with scissors], and eyes [of perception] put out by Sense”; once “Quick-seeing” and “Sense-conq’ring,” she has now “growne blind, and cold.” In “The Keys of the Gates,” Blake describes “Aged Ignorance,” a figure he equates with Satan (see “Keys” no. 11, E 268, where the speaker clearly is Satan), as “Holy & cold.” Hence, in Blake’s realignment in For the Sexes, Satan as blind morality shears the wings of Sense.

The above particulars lead to the observation that Blake made additional use of Quarles’s emblem, namely the dominating vignette of an airborne, hoofed devil engulfed in flames. This blackened devil with widespread bat wings sits on a suspended throne in heaven, presiding over the earthly assaults on Astræa and Faith by Fraud and Sense. He is described by Quarles as an “evill … corrupter of the world” (63), and the text quotes Revelation 12.12: “The Devill is come unto you, having great wrath, because he knoweth that he hath but a short time.” Quarles’s agitated devil as a “Usurper mounts the seat / Of royall Majestie” (61), wearing an imperial crown and holding a kingly forked scepter in his left hand, while his right hand holds a writhing serpent.

In plate 11 of Europe, 1794, politically oriented Blake implements Quarles’s iconography in a design in which a bat-winged pope wearing a papal crown as a high priest in the dark heavens sits on the chair of God, supervising the universe.See also the pope with bat wings in Night Thoughts 91 and the devil-hoofed pope wearing a conical mitre in Night Thoughts 396. In Night Thoughts 349 a swirling enraged “Leviathan” (Edward Young’s word) with flaming carbuncle on his head (Blake’s addition) is seen in the “foaming Billow” devouring “High Titles”; these high titles are envisioned by Blake as a web-handed scaly priest wearing a papal tiara, with a profile suspiciously close to that of George III (compare the caricature of George III in “John Bull Humbugg’d,” 12 May 1794). Blake’s devil-pope holds an open book, suggesting a book of judgment.Compare the book of chaos held by satanic Urizen, a figure possessing a crown-like halo in Urizen pl. 5, and the open book of stars held by a supernal female in Night Thoughts 501. The laws of this “brazen Book” in Europe 11 are “copied on Earth” by “Kings & Priests” (lines 3-4, E 64). 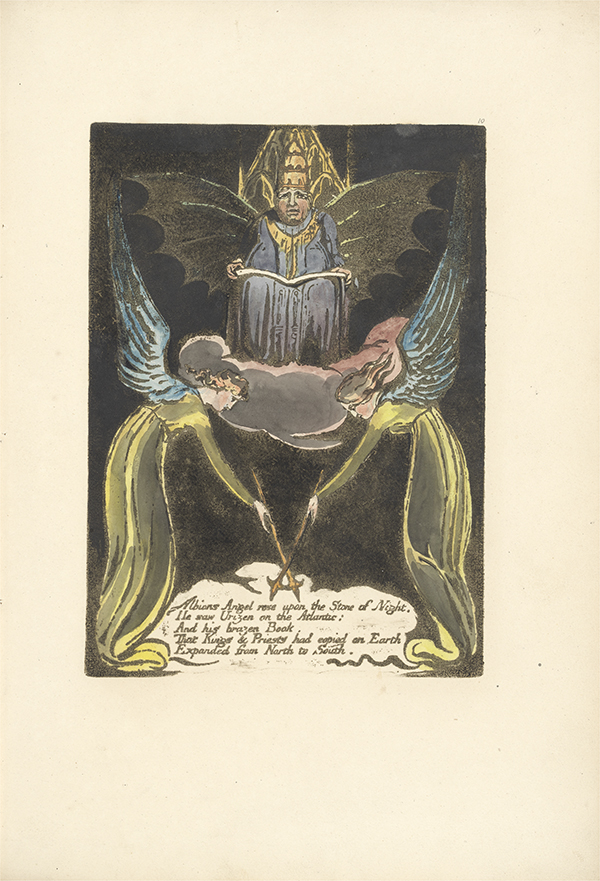 In Europe 11 the winglike bat ears on the corpulent pope’s head form in double vision a winged cherub,Compare the winged heads in Blake’s watercolors of The Death of St. Joseph and The Death of the Virgin, dated 1803. and Blake with purpose enhances such pictorial irony, as the chair in heaven is the English king’s coronation chair, housed in Westminster Abbey. As an apprentice Blake spent five years extensively sketching the monuments in Westminster Abbey, and he undoubtedly knew that beneath the chair was secreted the sacred Stone of Destiny (known also as the coronation stone), associated with Jacob’s Pillow, a stone engendering a dream wherein a ladder reached to the biblical heavens.The coronation stone is also called the Stone of Scone, which was taken from Scotland by Edward I in 1296; it was returned in 1996, after 700 years.

Blake deviously moved the gothic panels on the sides of this famous throne to the back, in order to simulate the bat ears of the ungodly pontiff. (In copy G the pope’s bat ears are not flesh colored, and thus appear to be an integral part of the throne’s design.)See G. E. Bentley, Jr., Blake Books (Oxford: Clarendon Press, 1977) 155. Significantly, Blake’s unholy divine potentially possesses the caricatured countenance of portly George III, a topical reflection of Quarles’s emblem that reveals “the seat / Of royall Majestie.” In a further irony, Quarles’s Fraud and Sense find their Blakean analogues in the two attending angelsThe crossed fleur-de-lis scepters with three leaves each held by these female angels may signify the English king’s “golden sceptre, with its cross” and top, which “rises into a fleur-de-lis, of six leaves” (B. Lambert, The History and Survey of London and Its Environs, vol. 4 [London, 1806] 117). to the left and right beneath the bat-winged pope.In his annotations to Bacon’s Essays, Blake violently rejected Bacon’s assertion that “a king is a mortal god on earth, unto whom the living God hath lent his own name” (E 624), and executed an obscene drawing in which a chain of excrement descends from the “devils arse,” ending in the inscription “A King” (E 624). See Robert W. Rix, “Blake, Bacon and ‘The Devils Arse,’” Blake 37.4 (spring 2004): 137-44. Thus, scatology becomes eschatology. Rejecting “Kingship <﻿or Allegoric Godship﻿>,” Blake declared that God exists only in the extraneous “<﻿Effluvia﻿>” of kings and priests (annotations to Thornton, E 669).