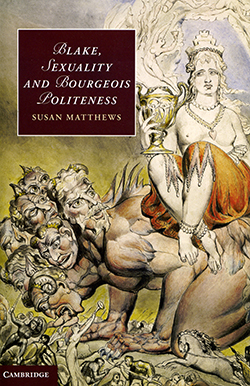 Matthews’s book, a must-read for anyone interested in Blake and gender, reinvestigates Blake’s attitude toward sexual freedom, especially female desire, while firmly identifying his approach to gendered sexuality as a response to the dictates of eighteenth-century bourgeois culture, politeness, and sensibility. Matthews relocates Blake by focusing on his commercial works and recontextualizes his poetic language via the public discourse on sexuality within the bourgeois world. The new Blake emerges once the works normally associated with misogynistic views are more and better contextualized within the personal and textual networks surrounding them: “Like Oothoon, [Nicholas Rowe’s Jane] Shore is opened by suffering to a consciousness of others, losing a sense of her own separate self and of the separateness of sexuality from other categories” (198). Here, the feminine self is presented as emotionally involved and engaging (sexually), which means that it inadvertently challenges its liminal position as passive other, fixed as a norm and constructed through eighteenth-century cultural discourse. Female figures who are engaged, Matthews argues, counterpoint the masculine self and Adam Smith’s model of the sympathetic spectator, which relies on the point of view of the masculine self as focalizer of emotion.

Blake, Sexuality and Bourgeois Politeness discusses Blake alongside William Cowper, George Cumberland, Henry Fuseli, William Hayley, Samuel Richardson, Hannah More, and Mary Wollstonecraft. And it does a lot more than introduce yet another Blake; it addresses and tackles a fundamental paradox: how can the Blake of the 1790s, hailed as a figurehead for sexual liberation, be so negative about female desire in his later epic works? Much of the early writing on Blake’s sexual politics (Fox, Mellor, Ostriker), Matthews points out, helped to create the now-familiar account of an ideal Blakean world that excluded the physical body (which Blake didn’t like or was at least ambivalent about), a world represented as positive because those populating it were happy anyway. More often than not, Blake’s more mature and complicated myth, unfolding in Milton and Jerusalem, has been interpreted as steering toward a requirement that individual identity be transcended, neutralized in an androgynous-looking body. Surely this is not what Blake had in mind. The paradox, according to Matthews, can only be solved by dismantling the categories Blake is using, because what is now standard terminology among feminists clouds how unstable or slippery the language at Blake’s disposal actually was: “The difference of Beulah and Eternity is perhaps better understood in terms of differing understandings of the word ‘sexuality’ or of differing sexual cultures. It is clearly inappropriate to assume that there is a single entity called ‘sex’ or ‘sexuality’” (106), since the two-sex model, as discussed in the work of Thomas Laqueur, was not yet fully developed. In Blake’s time, “sexuality” designated what we now understand to be captured by “gender,” or rather the words “sex,” “sexual,” and “sexuality” define and convert “female” into “feminine.” Matthews takes her lead from queer scholarship (Bruder, Elfenbein, Hobson), which first identified and claimed positive treatments of same-sex desire, in order to reclaim “sexuality for feminism” (5). In Blake, Sexuality and Bourgeois Politeness she assembles and reconstructs literary and cultural contexts out of which the historically situated meaning of the word “sexuality” can be seen to emerge. With this approach, Matthews adds but also rejects some of the scholarly work (Makdisi, Mee, Thompson, Worrall) that has associated Blake’s opinions with radical and dissenting subcultures. She proposes that Blake was always pro-sex, and that only the complexity of his thoughts, communicated through texts and images, increased: “The key to my argument lies in the newness of the word ‘sexuality’ in Blake’s time” (3). Matthews works on shifts in meaning taking place within the bourgeois world, arguing that Blake commented critically on the increasing construction of gendered identity and the way it regulated sexual pleasure.

The book is organized into eight chapters, which trace the changes in the language as they become manifest in literature and visual culture and historicize the discourse of identity. Matthews is not interested in biographical connections, though she firmly roots her study in the Felpham years and both the time and language shared with Hayley, and perhaps overemphasizes the impact Fuseli may have had on Blake. The chapters, which intertwine late with early Blake and weave together works by several of his contemporaries, contain an impressive amount of archival research.

Chapter 1 starts with the expression “happy copulation” from Visions of the Daughters of Albion, and explains it as a visual and physically transformative or sexual experience, while pitching it against Smith’s sympathetic spectator, who remains emotionally detached and never enjoys or merges with what “he” observes. The backdrops for this discussion are the publication of Hogarth’s satiric prints in the 1790s and Barry’s anti-European attitudes. This point about visual culture is taken up in chapter 2, where Fuseli and public and private exhibition cultures existing independently of the Royal Academy move center stage. Matthews illuminates the symbolism in Fuseli’s Titania and Bottom and elaborates on his views of female sexuality as well as their European origins. All this resonates with Blake’s Gothic treatment of the perceived loss of sexual liberty and the sexual politics of Europe, where by means of the dream device and a frame narrative Blake associates sex with fairy power and healthy, unregulated passion.

The next chapter pair begins with the cultural denotations of the word “soft” and the editions of and illustrations to Hayley’s The Triumphs of Temper; it examines how words migrate from the “positive feminine sphere” (56) of Hayley’s poem, as well as his “feminised world” (73), into Blake’s poetry (An Island in the Moon), where they appear manipulated to counteract the objections made by Cowper, More, and Wollstonecraft. Matthews then turns to Hayley’s Essay on Old Maids and its “precursor texts” (84) in Hayley’s library, the main one being Martin Madan’s Thelyphthora. The discussion is on the benefits of desire on (old and young) bodies as well as society as a whole. Chapter 4, in other words, historicizes virginity and prostitution, as well as polygamy, to identify Blake’s pro-sex attitude, implied in the sympathetic characters Thel and Ololon.

In chapter 5, where Matthews delineates Blake’s revisionary reading of Cowper (a cousin of Madan), we see Blake move away from Hayley, since he undermines the feminized identity constructed in Hayley’s biography of Cowper by sexualizing it. Thematic and pictorial connections are made between The Task, The Marriage of Heaven and Hell, the Urizen books, Milton, and illustrations to Cowper’s poems. Many of the passages that we have become accustomed to reading as descriptions of rape do not represent rape: “Sex is not the end of the story, as it is for Hayley and for Richardson …, but the event which precipitates or allows the possibility of change” (150). So far, we have learnt that sex (consensual or non-consensual) is good because it unblocks the body and releases its energies. Matthews now overlays earthquake imagery, which can symbolize a sexually excited female, with ideas of sexual liberation and artistic production. This allegorizing of violent acts is provocative rhetorically because it doesn’t face the fact that people have died from them. Chapter 6, however, historicizes rape narratives by investigating textual relations between Richardson’s Clarissa and Blake’s Visions and Cumberland’s annotations to Europe (copy D), because it examines connections between these texts via Edward Bysshe’s Art of English Poetry and the owners of this book: Richardson, Blake, and Cumberland. It looks into literary references and the use of quotations (in Clarissa) while comparing Blake’s annotations (to the books he owned) and Cumberland’s (to Europe) and exploring their impact on text. Matthews teases out the polysemy of the newly opened-up gaps. The conclusion is that Blake opted for an open and fragmented writing technique, a device that Matthews (too narrowly) associates with Alexander Geddes and German higher criticism. The effect is that Visions, because it doesn’t offer a coherent plot or the consciousness of a three-dimensional female character, exposes how the threat of rape is used to regulate female sexuality. To put this differently, with the multiple and competing voices suggesting female agency, Blake is mimicking the debate about female sexuality taking place at the end of the eighteenth century, as well as giving women a voice.

Chapter 7 engages with Blake’s illustrations to Blair’s The Grave and Malkin’s A Father’s Memoirs of His Child, which includes material from Mrs. Malkin’s journal, to explore expressions of mourning in the public sphere. It also treats the Petworth Vision of the Last Judgment (1808), a commission organized by Ozias Humphry and from Lord Egremont but for the Countess of Egremont, as well as Blake’s description of the painting, which, Matthews argues, was directed at female readers. This form of address makes the painting, like The Whore of Babylon (1809), an unambiguous and positive statement about liberated female sexuality (185). Blake not only embodies souls in his pictures of the afterlife but also infuses the bodies with sexual undertones, which upset the reviewers because it suggested to them visionary enthusiasm as well as excessive grieving. Blake’s art, according to Matthews, creates a spiritual world that is sexualized to include representations of equality as well as female empowerment. This world, which Matthews links to Fuseli’s, has room for parody and differs substantially from the world envisaged in (the more private) Jerusalem (184). The final chapter, which brings together writers and texts that Blake engaged with, finds that Blake was a consistent defender of female sexuality and rejected the regulative discourses of politeness, sensibility, enthusiasm, and evangelicalism. He was aware of the scandal caused by Godwin’s Memoirs and sympathetic toward Wollstonecraft: “Blake’s unqualified praise of Cumberland’s 1798 Captive, the year of the Wollstonecraft scandal and Malthus’s Essay, makes the argument that around this time he develops a virulent hostility towards active female sexuality particularly improbable” (190). Positioning Blake’s utopian ideas of sexual union, which transcend the individual identity of a visually gendered body, around the debate about female desire, Matthews rounds off her discussion of Blake and sexuality by tracing his take on the issue of adultery right through to the exhibition of 1809, with its focus on naked bodies and the juxtaposition of The Penance of Jane Shore and The Goats with The Spiritual Form of Nelson Guiding Leviathan.

Matthews’s book is a fierce, fascinating, and passionate response to the last thirty years in Blake studies; it revisits the debates initiated by the feminists to claim that Blake’s opinion of both gender and sexuality can only make sense if firmly placed into their historical linguistic context. Matthews successfully carves out a new area of investigation and convincingly presents a new Blake. Because this Blake blurs the boundaries of the very words and categories we (today) assess him with, he emerges from Blake, Sexuality and Bourgeois Politeness as an even more radical figure.