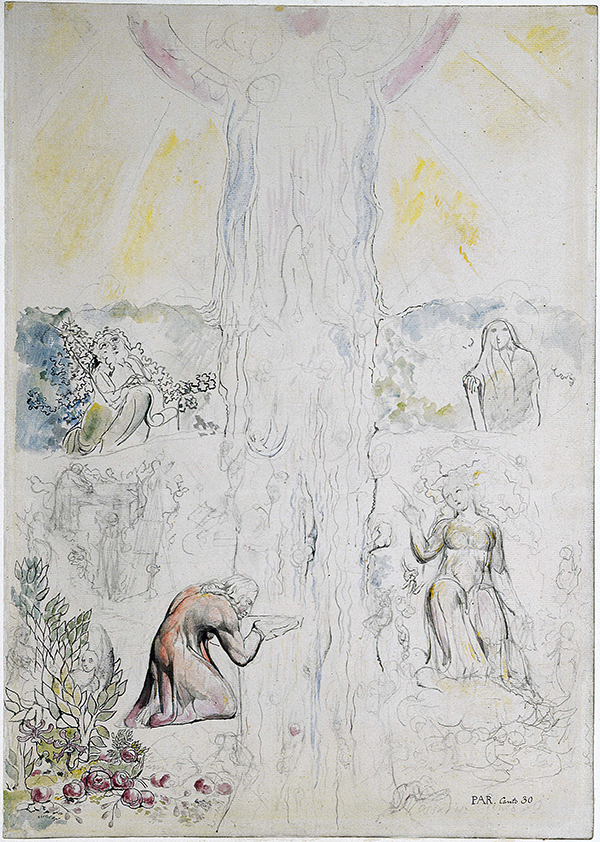 Blake’s penultimate watercolor illustrating The Divine Comedy pictures Dante drinking from the river of light in paradise (illus. 1). Beatrice resides in glory right of the river. Other figures in the design are not directly summoned by Dante’s text, including a seated male center left holding a scroll and with eyes turned upward. Roe identifies him as a “bearded poet” (190). Below him, sketched in tentative pencil lines, is a figure standing left of an easel bearing a canvas (illus. 2). This painter, who wears a high-waisted gown, may be female; she is holding a palette in her left hand and a brush in her right. 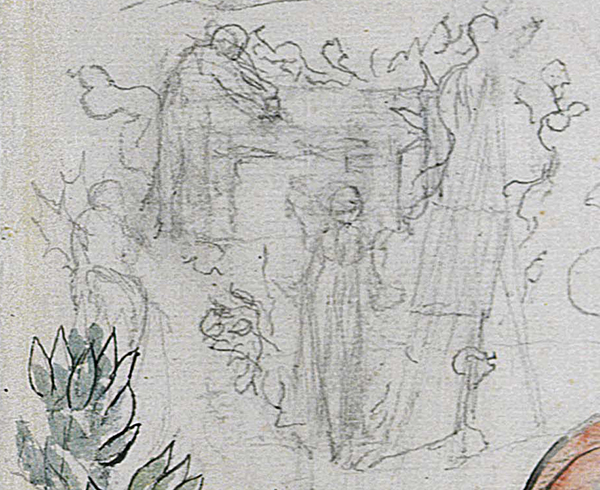 2. Detail of illus. 1, area shown approximately 9.7 x 11.6 cm. Tate Collection, reproduced by permission; digital image courtesy of the William Blake Archive.
Between these representatives of the arts is a loose sketch of what looks like a sturdy table with a figure standing at its left end. Roe was the first to observe that these motifs show “an engraver’s press” as “a man bends over” it (190). Variant descriptions are provided by Klonsky (“a man working at an engraver’s bench,” 162), Butlin (“a scene of painting and engraving,” 1: 587), and Tinkler-Villani (“an engraver,” 283). Baine offers the most detailed description: “Blake, like Michelangelo in his Last Judgment and Raphael in his Disputa, has sketched himself, in flames of inspiration. He is working at his press; and at an easel, palette and brush in hand, his earthly Emanation, Catherine, looks modestly down, as in his portrait of her …, presumably tinting some of the sheets which he is working off” (128). This tiny and tentative vignette deserves further consideration, especially because it calls to mind Blake’s own professional activities as etcher, engraver, and printer.

Several design elements support Roe’s claim that the furniture is an etcher’s or engraver’s rolling press. The legs of the table are particularly substantial and hence unfashionable for the early nineteenth century, but supports of this type were necessary to keep a press stable during operation. The confused sketching at the right end of the table (or bed of a press) includes elongated and wavy forms that appear to radiate from an unpictured center. This may be the star wheel used to turn the upper roller of an engraver’s press. A rectangle within these spokes, more tall than wide, could be the beginnings of the large side verticals of a rolling press, although these would normally extend much higher.These large vertical members are variously called “posts,” “cheeks,” and “jumelles.” See Faithorne 49-58 for an illustrated description of an eighteenth-century rolling press. A curved form resembling a crescent moon appears right and slightly above the vertical. This may be a partial end view of a roller, although out of normal position. Further above and to the right, but partly obscured by the painter’s easel, are the head and shoulder of another human form, perhaps seen from behind. All these motifs are sketchy, tentative, and perhaps little more than placeholders for subsequent development with pen, ink, and watercolors.

Although the gender is far from certain, the figure at the left end of the press may be wearing a gown (hence female?) or a printer’s apron (thus either gender). In comparison to the willowy female painter below, this figure at the press looks heavier and stolid and thus is more probably a man. He leans to the right, arms extended and raised at roughly forty-five degrees, with a small rectangular object in one or both hands. This worker is placing either a copperplate on the bed of the press or a leaf of paper atop a plate already in position.

It is difficult to believe that Blake, when drawing such a scene, was not thinking about his many years operating a rolling press.For Blake’s ownership of a rolling press, see Bentley 33, 468, 610fn, 633. Although we cannot read his mind, we can read our own and claim with confidence that we cannot look upon this vignette without thinking of Blake, his wife, and their teamwork as printers.We know that Catherine had become skilled at printing by 1800, and probably at a much earlier date. As Blake writes in a letter to William Hayley of 26 Nov. 1800, “my wife’s illness not being quite gone off, she has not printed any more” impressions of Little Tom the Sailor, a broadside etched in relief and white line (E 714). Catherine also printed intaglio plates; see Blake’s letter to his brother James of 30 Jan. 1803: “My Wife has undertaken to Print the whole number of the Plates for” Hayley’s Life, and Posthumous Writings, of William Cowper (E 726). Blake was very probably the “dirty hands” craftsman when the two were printing, managing the inking and placement of the plate on the bed of the press. Thus, if the figure on the left is holding a copperplate, this is Blake. The figure on the right may be Catherine, the “clean hands” worker, preparing to turn the wheel.Viscomi describes how Blake would “ink” the plates and “bring them to the press bed,” while Catherine would operate the star wheel to “pull the bed under the roller” (117). Baine’s proposal that Catherine is the figure at the easel merits consideration, although it is highly unlikely that she is “tinting some of the sheets” that Blake is “working off” at the press (128). Prints on paper would be placed on a table, not an easel, for coloring. If, however, the figure on the left is handling paper, then this is Catherine, with Blake on the right. We are unable to decipher with confidence the forms at the far right of the vignette. The way they suggest a figure seen in right profile with right arm bent upward may be accidental. If purposeful, this might be an alternative sketch for a person operating the press, his or her right hand reaching out for a spoke of the star wheel. We are not claiming that these are literal portraits of one or both Blakes; rather, they are figures that evoke their presence, laboring at a task of great importance to their lives—and now to ours because of the products of their endeavors.

Some subsidiary motifs lead toward other associations. The jagged forms above the bed of the press suggest flames; the rounded forms, particularly those left of the printer on the left, may be clouds or smoke. This may be a scene of “printing in the infernal method,” to quote the famous characterization in The Marriage of Heaven and Hell of how Blake printed his illuminated books (E 39). The flames above the press are “the fires of hell,” associated not with “torment and insanity,” as the angels see them in The Marriage, but with “the enjoyments of Genius” when viewed from the perspective of the imaginative artist (E 35). The spokes of the star wheel also are flame-like, perhaps a visual pun on the heat and light emanating from a star. Blake claimed, in a letter to William Hayley of 1800, that “My fingers Emit sparks of fire with Expectation of my future labours” (E 709). Here, one of the tools necessary for those labors emits spokes of fire.

The hellish implications are complemented by the final member of the printing team, sketched lower left. This figure, more probably male than female, stands or sits while looking right and perhaps up at the printer on the left. His bat wings are characteristic of Blake’s representations of a spectre or devil. In this context, the figure also reminds us of a “printer’s devil”—that is, an apprentice black with ink—and the “mighty Devil folded in black clouds, hovering on the sides of the rock” in The Marriage.E 35. Scholars have associated the “mighty Devil” with Blake himself and the “rock,” like the “flat sided steep” in the same passage, with a copperplate—see Erdman, The Illuminated Blake 103-04 and Eaves, Essick, and Viscomi 125. Because he is “folded in black clouds,” this may also be a mythologized printer’s devil. For pictures of bat-winged devils, see the Job engravings of 1826, plate numbered 3, and several Dante watercolors, including Butlin #812.32, 34, 37, 38, 39, 41, 42. He may be “a good naturd Devil,” helpful when printing infernally, or even one like the “Angel, who is now become a Devil,” and “is my particular friend” (letter to Hayley of 7 October 1803, E 737; Marriage, E 44).

These devilish characters and activities, particularly if situated in “a Printing house in Hell” (Marriage, E 40), may seem an intrusion into, or even a criticism of, Dante’s celestial vision in the passage illustrated from the thirtieth canto of the “Paradiso.” Although this perspective may have some merit, there are larger themes at play in both the poem and Blake’s design that indicate compatibility more than critique. Dante refers to how his “course” in life was “bounded” by “the limit of his skill,” “as each artist’s is” (Dante 3: 268). These limits are surpassed when he drinks from the river of light, itself related typologically to Arethusa, the river of poetic inspiration. Dante’s “sight” is “kindled afresh”; he can now see “with ease” the “full dimensions” of heaven (Dante 3: 270, 273). The expansion of vision beyond the material, the ways in which the arts promote that revelation, and the unity of art and true religion are all basic to Blake’s own beliefs. As Blake wrote on his Laocoön engraving, “Christianity is Art” and “The Divine Body … manifests itself in his [man’s] Works of Art (In Eternity All is Vision).”E 274, 273. The Laocoön inscriptions (but not the picture of the statue itself) are now datable to c. 1826–27, the period in which Blake was working on his Dante designs. According to John Clark Strange, Blake gave Samuel Palmer an impression of Laocoön and said to Palmer, “you will find my creed there” (Bentley 726). Blake’s inclusion of scenes of artistic creation within his Dante watercolor acknowledges and foregrounds their shared sense of visionary awakening.

The inclusion of printing with poetry and painting in the Dante designs elevates what was taken in Blake’s day as a mere craft into the higher realm of the arts. Blake implies a similar valorization when he names himself on the title pages of several illuminated books as the “Author & Printer” rather than the “Author & Artist” or “Author & Illustrator.”There is No Natural Religion, The Book of Thel, Songs of Innocence, Songs of Experience, and Milton (E 2, 3, 7, 18, 95). Other illuminated books of the 1790s and Jerusalem name Blake as only their printer. He reconfigures and thereby criticizes the ordering of the arts in his time, a restrictive hierarchy that contributed to his marginalized social position, as an engraver and printer, in early nineteenth-century London. Such interweavings of the personal, the political, and the transcendent are a central feature of Blake’s poetry and designs, as they are in Dante’s Divine Comedy.

Viscomi, Joseph. Blake and the Idea of the Book. Princeton: Princeton UP, 1993.