Staging The Marriage of Heaven and Hell

In May 1970 The Marriage of Heaven and Hell was presented in a stage version at the University of Chicago. The production was the work of Cain’s Company, a group formed a few years before at the university with the first complete stage presentation of another great Romantic text, Lord Byron’s Cain. But whereas Cain, though a closet drama, retains at least the formal qualities of a stage play, Blake’s poem had to be converted wholesale into theatrical forms.

Yet the poem’s drastic insistence upon extending the boundaries of perception seemed to recommend an attempt at stage dramatization. The work of adaptation took about four months, during which time it quickly became apparent that the greatest obstacle to a successful stage version was, paradoxically perhaps, the vigor of Blake’s own language and visual perceptions. One had constantly to resist the inclination simply to transfer the various “scenes” in the poem to the stage. Blake’s poem has a powerful visual quality, but that quality is so involved with the nature of his language as such that the conception of a theatrical representation was constantly being thwarted by the words of the poem.

In the end, the language of the poem was reduced to a schematic minimum so that the entire work of elaborating the poem’s basic ideas and attitudes would be rescued from language and transferred to theatre. On the other hand, the skeletal form of the poem was preserved almost exactly in the play: the only major change was the precise repetition of an early scene (plates 5-6) at a later point in the play. The stage version thus preserved Blake’s pattern of series of scenes in 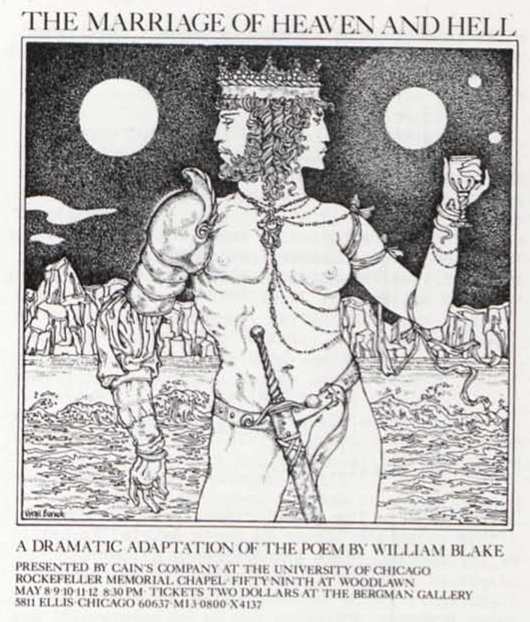 which awareness is expanded in a variety of ways until an apotheosis becomes both the possible and even inevitable result.

The play differed from the poem in two other noticeable ways. In the first place, Blake himself was made the central character, and all the scenes occurred in direct or oblique relation to him. The decision to make Blake a visible character did not seem a distortion of The Marriage, but a theatrical representation of the intensely personal character of the poem itself.

In the second place, while the text of the play was basically a reduced text of the poem, it incorporated as well some passages from Blake’s other prose and poetry. The adaptation included nothing which does not appear in Blake’s own collected works, and of course all the interpolated passages (e.g., excerpts from “The Lamb” and “The Tyger”) were only chosen if they would clarify aspects of the Marriage.

In adapting the poem, much time was spent inventing new, specifically theatrical representations for the ideas and conflicts in the poem. Yet no attempt was made to cast these translations into any terms which were not highly “poetical,” ritualized, and dreamlike. The recent London adaptation of a Blake world, Tyger, seems to me to have failed precisely because Blake’s powerfully concrete abstractions were poured into stylized realistic forms, on the apparent (and incorrect) assumption that any current appeal of Blake’s strange visions requires a sort of Pop Art or Camp style. The principle which held throughout the Chicago production of The Marriage of Heaven and Hell, on the contrary, was much more literal-minded. begin page 183 | ↑ back to top No attempt was made to compromise the bizarre qualities of the poem (for example, the Printing House in Hell scene). Blake’s uniquely weird perception of such an (essentially) familiar place demands a corresponding imaginative effort from his reader. The method of the poem dictated the method of the play, which attacked the audience with a wide variety of sensational stimuli organized not according to patterns of plot but phases of pure effect. At every point the essential aim of the play was to induce new experiences of wonderment. For this reason the Chicago stage version resembled a ballet almost as much as it did a drama, just as its text was at least as much scenario as play. The blocking of the production was constantly turning into choreography.

The Chicago Marriage was presented in the Chancel of Rockefeller Chapel, a large Neo-Gothic church on the campus of the university. The audience was seated in the nave. The production itself was based upon a severe design of multi-media effects. This design, an incorporation of dance, song, mime, and various forms of ritual drama, was set in a context of aggressive visual and audial stimuli. In this way the style of the production attempted to translate Blake’s firm grasp upon the marvellous into effective theatrical terms, and even to reproduce a stage analogue for the farrago of literary styles which Blake’s great poem illustrates. 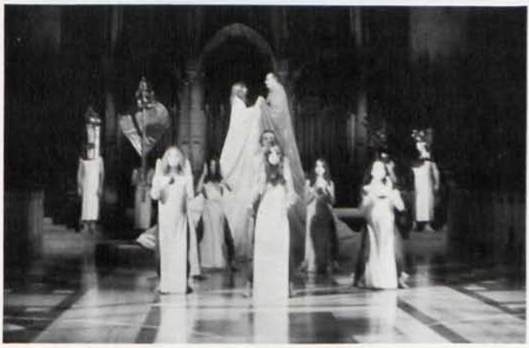