Among the collection of drawings bequeathed to the Comune of Florence in 1916 and now in the care of the Gabinetto dei Disegni in the Uffizi are two sheets by William Blake, probably retained by Horne when he sold a large part of his collection to Edward Marsh on leaving England for Italy in 1904. (Among the drawings sold was the greatest of the Tiriel illustrations, “Har and Heva Bathing,” now in the Fitzwilliam Museum, Cambridge.)

One side of the first drawing (Horne inventory no. 5977) has been shown by David Bindman to be a study for Moore & Co’s advertisement engraved by Blake, according to Bindman, circa 1780-1785 but dated by Keynes circa 1790 (see J. N. Sunderland, review of L. Ragghianti Collobi, Disegni Inglesi della Fondazione Horne in Firenze [1966], in Burlington Magazine, 110 [1968], 706, and Geoffrey Keynes, Blake’s Engravings: The Separate Plates [1956], pp. 15-16, repr. pl. 10).*↤ * Correction by Martin Butlin (Fall 1972): I gave the alternative datings for Moore & Co’s advertisement given by Keynes and David Bindman but regrettably failed to record the definitive arguments for dating the print, and hence the related drawing, to 1797-98 by David Erdman in his article “The Suppressed and Altered Passages in Blake’s Jerusalem,” in Studies in Bibliography, 17 (1964), 36, n. 34. Although the figure style of this print is relatively tame in its delicacy and neoclassicism when one thinks of the dramatic impact of the large color prints of 1795, the style is perfectly acceptable in view of the commercial nature of the undertaking and considerably more accomplished than Blake’s earlier work for commercial engravings such as the illustrations to Mary Wollstonecroft of 1791. There are indeed close similarities, allowing for the differences in scale and subject, to some of the Night Thoughts illustrations of 1796-97, for instance the smaller figures on the title-page to Night the First. That the crude drawing on the reverse can still be dated c. 1779 is no objection to a later dating for the recto. Thanks to Bentley, Blake’s economic re-use of paper is now well documented and there are a number of cases in which a sheet of paper has been used at widely differing dates, sometimes after being cut in half in the process (e.g., the drawing for “The Eagle” in the Rosenwald collection, on the back of which Blake drew two alternative title-page [?] designs considerably later in style).[e] The other side [fig. 1], catalogued by Collobi (p. 46) as the Hypocrites from Dante, is, as Bindman points out, an early drawing possibly related to Blake’s series of illustrations to British history of circa 1779; in its stiffness and crudity it could possibly be by Robert Blake. The paper size of this drawing is 11 15/16 × 9 ⅝ inches (30.4 × 24.5 cm.); the Moore & Co’s advertisement sketch measures approximately 8 ¼ × 9 inches (21 × 23 cm.) while the drawing on the other side, which is drawn with the paper turned to give an oblong rather than an upright format, measures about 7 ¼ × 9 ½ inches (18.5 × 24 cm.). 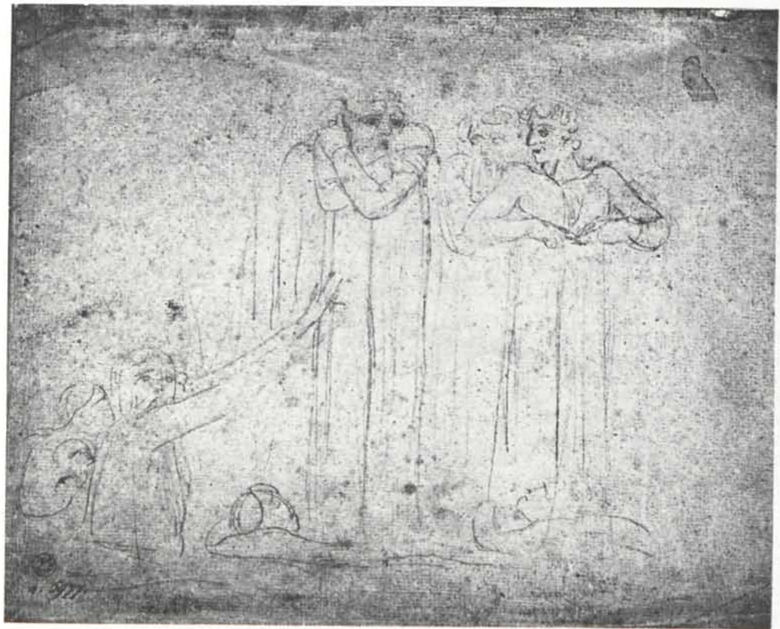 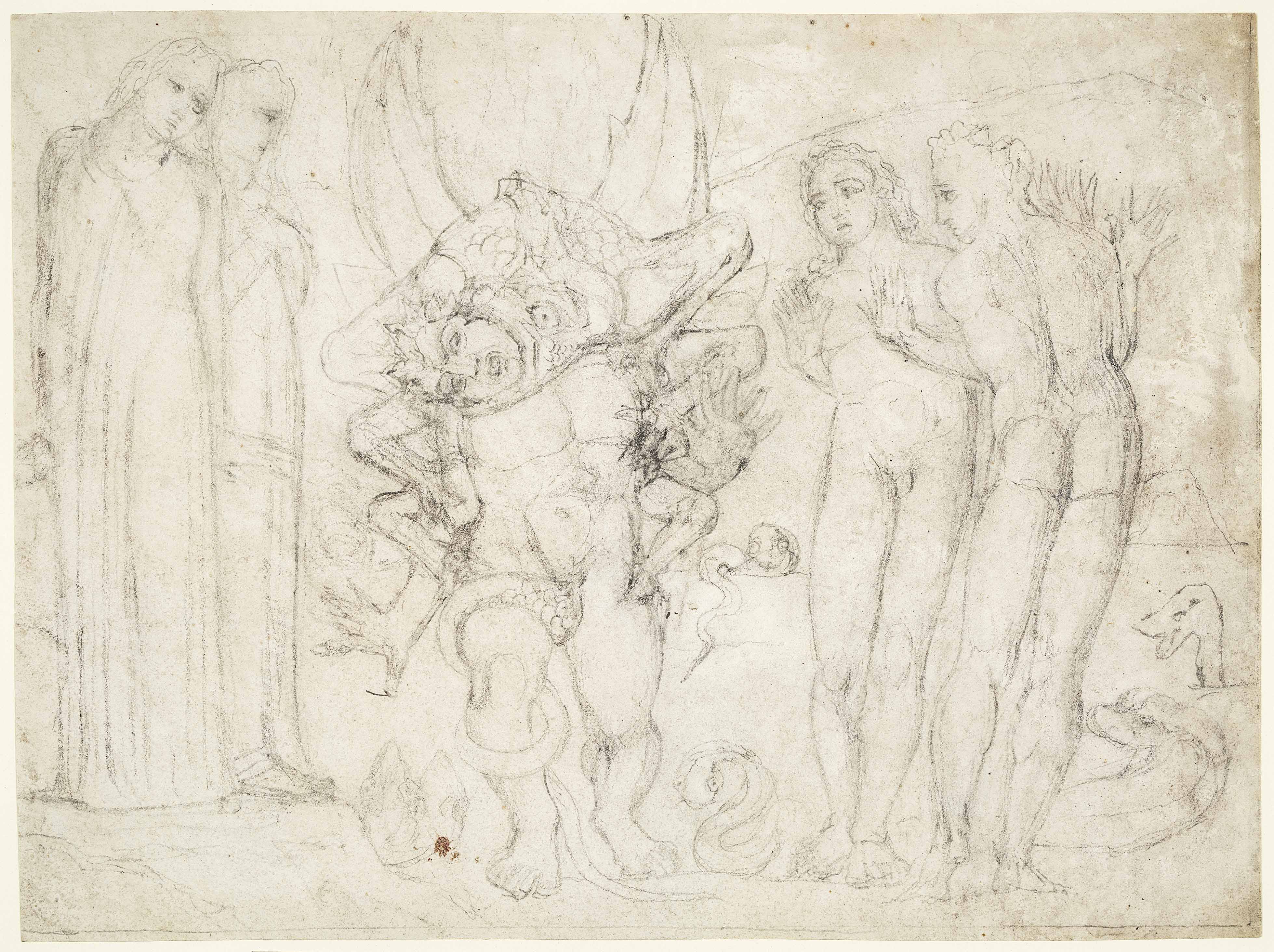 Both sides of the other sheet (Horne inventory no. 5976) are devoted to sketches for Blake’s illustrations to Dante of 1824-1827. The recto [fig. 2] is a sketch for no. 51, “The Six-Footed Serpent attacking Agnolo Brunelleschi.” This would seem to have been drawn before the sketch in the Huntington Library (repr. Geoffrey Keynes, Blake’s Pencil Drawings, Second Series [1956], pl. 54). Although more or less the same size, 9 ½ × 13 inches (24.1 × 33 cm.) as opposed to 9 9/16 × 12 ¾ inches (24.3 × 32.4 cm.), it does not include the serpents on the right side of the composition, nor does it extend so far on the left or below. It is slightly freer in draftsmanship and less detailed. Heavily incised lines on the central and right figures, and to a lesser extent on those to the left, were presumably aids in transferring the composition to the Huntington drawing.

The reverse of this drawing [fig. 3] shows two figures apparently clambering up over a small hill in the foreground with, behind them, further hills with flames rising on each side. The scene is similar in general terms to the view through Hell-Gate in no. 4 of the Dante illustrations and to the backgrounds of a number of illustrations of the Pit of Thieves such as the Agnolo Brunelleschi drawing 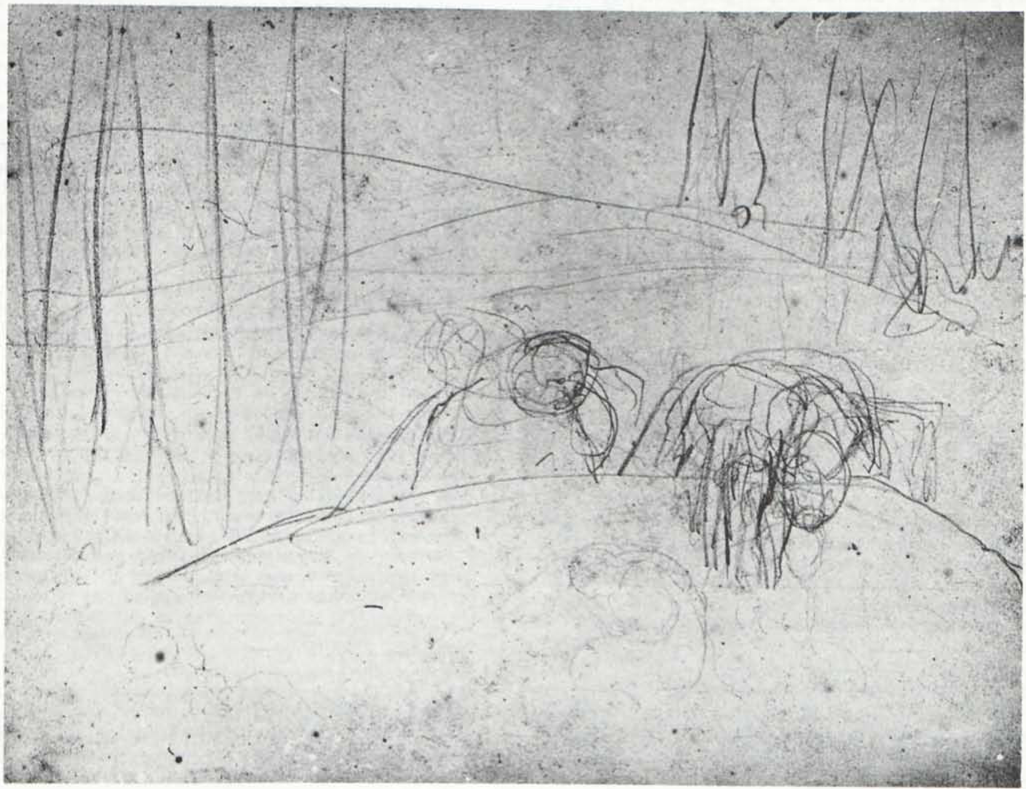 3 Sketch for one of Blake’s illustrations to Dante.   Uffizi Gallery, Florence.
mentioned above. It was however, probably drawn in connection with the Pit of Disease as it appears to have been done over slighter sketches including two figures seated back to back and scratching themselves as in Dante illustration no. 58. Flames and rounded hills are prominent in the backgrounds of the three previous drawings but there is no direct relationship.

The Horne collection also includes one other drawing tentatively attributed to Blake as an “Allegorical Subject with Satan, from The Marriage of Heaven and Hell,” but this bears no resemblance to Blake’s genuine works. The nearest one can get is perhaps William Blake Richmond, the son of Blake’s young friend!

All these drawings have been reproduced in the catalogue by Licia Ragghianti Collobi mentioned above, pls. 28-32, where they are also inadequately catalogued on pages 45-47. The recto of the second drawing was also included, but not illustrated in the catalogue, in the 1970 exhibition, Firenze e l’Inghilterra, at the Palazzo Pitti. This note and the accompanying illustrations should, however, make the drawings more accessible to Blake scholars.