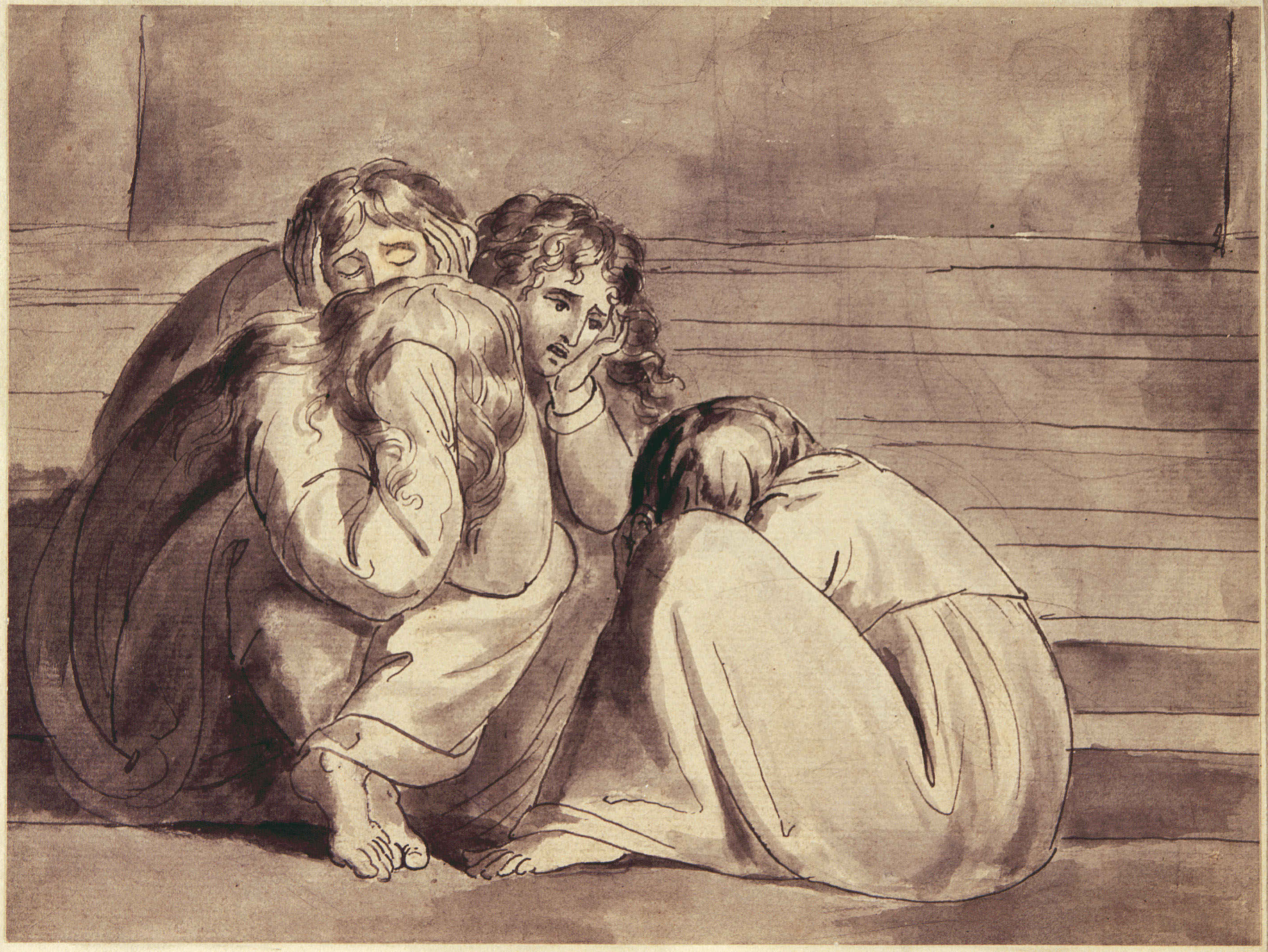 “Wisdom is sold in the desolate market where none come to buy.” FZ II:400

The 1971 auction season, surveyed in Blake Newsletter 19 (Winter, 1971-72), pp. 183-84, was remarkable for the high quality of works sold and the number of fine illuminated books which changed hands. The last two years have seen some decrease in quality, but a considerable increase in quantity, both at auction and in book and print dealers catalogues. Most notable is the growing interest in Blake’s commercial book illustrations, partly out of necessity as the more important materials gravitate ceaselessly towards public collections. Almost all dealers now seem to own Bentley & Nurmi, and once a title is recognized as one containing an “ORIGINAL PLATE ENGRAVED BY THE VISIONARY ARTIST WILLIAM BLAKE,” the asking price is at least quadrupled. Even individual plates pulled from the books they illustrate have appeared at London auctions, those engraved after Blake’s own designs or after Fuseli fetching the best prices. The Job illustrations are no longer considered a book, but rather a series of plates subject to dismemberment and sale print by print. In some respects this is unfortunate, but it is a boon for the small collector who could never afford all twenty-two plates but can obtain one or two.

Prices have, of course, increased at a steady pace. Listed below are the most important New York and London auctions of Blake drawings and watercolors, prints, and books and letters, including a few works by artists associated with Blake.

Sotheby Parke-Bernet, New York, 16 May 1972 Lot 70. A pencil and ink drawing attributed to Blake, “apparently an illustration for Dante’s Inferno,” from the W. A. White Collection. The drawing is reproduced as the frontispiece to the sale catalogue. It might be by Fuseli or von Holst, but looks very little like anything Blake ever did, much less a Dante illustration. Apparently someone informed the auction house of the dubious attribution, for the sketch was withdrawn.

Christie’s, London, 5 June 1973 Lot 42. “Mary Magdalen at the Sepulchre,” one of the black ink and watercolor drawings begin page 53 | ↑ back to top executed by Blake for Thomas Butts circa 1805. This magnificent work is reproduced in the catalogue and in Blake Newsletter 23 (Winter 1972-73), cover and p. [59] with a note on the sale. £23,100, Agnew. Formerly owned by Thomas Butts, Thomas Butts, Jr., F. T. Palgrave, and Lady Beatrix Maud Cecil, the drawing is now in the collection of Mr. and Mrs. Paul Mellon.

Lot 113. “The Mourners,” an ink and grey wash drawing by Blake of four figures huddled together before some steps [illus. 1], once in the collection of Mrs. Alexander Gilchrist. Reproduced in the catalogue. 2,400 guineas, Cooper.

Twenty-nine drawings by George Richmond were sold by one of his descendants, including a fine Blake-like sketch of “Samson Slaying the Philistines with the Jaw-Bone of an Ass,” reproduced in the catalogue; and a sketch of “A Sleeping Shepherd and his Dog” with the energetic spirit typical of The Ancients.

Lot 302. “Tornado,” engraved by Blake after Fuseli for Erasmus Darwin’s Botanic Garden, third edition. A proof lacking a good deal of finish work in the design and before title inscription and imprint. Worn in spots, a few pieces missing, laid down and repaired. £110, Maggs. Now in the author’s collection. There are four other proofs of this plate, three in the British Museum and one in the collection of Mr. and Mrs. Raymond Lister. All lack the same work in the design, but some have the title inscription.

Lot 16. Blake’s engraved illustration to Dante’s Inferno, plate 3, “Two of the Malebranche Quarrelling.” Except for a tiny abrasion on the raised hand of one of the combatants, this is one of the finest impressions I have ever seen, with particularly rich burr. Reproduced in the catalogue. $1,600.00, Robert Light, Inc.

Lot 110. A book of portraits of and after Thomas Phillips, from the Dawson Turner collection. Over one hundred items, including Phillips’ portrait of Blake engraved by Schiavonetti for Blair’s Grave and a proof of Blake’s engraved portrait of Earl Spencer. £1,100, Edmunds. The portrait of Spencer, like the only other known copy in the British begin page 54 | ↑ back to top Museum, is inscribed in pencil “never published.”

Lot 19. Blake, Illustrations of the Book of Job, proof set on laid India paper complete, but the title plate is probably a later impression. Some foxing and damp stains in the margins. Sold with an unpasted example of the printed label. This and the next lot are from the collection of Sir Thomas Phillips and the Robinson Trust. £3,200, D. Tunick.

Lot 22. Blake, “Adam Naming the Beasts,” the frontispiece to Hayley’s Designs to a Series of Ballads, 1802, from the Ruthven Todd collection. £80, W. Weston.

Lot 25. Blake, “The Man Sweeping the Interpreter’s Parlour,” engraving on pewter, from the collections of Dr. Greville Macdonald and Ruthven Todd. Reproduced in the catalogue. £2, 100, D. Tunick. The estimate was only £500.

Lots 26 and 27. Blake, The Book of Thel, title-page and “Thel and the Worm,” uncolored, very likely posthumous impressions. Both of these lots were withdrawn because of a disagreement between the owner and the auction house concerning the reserve price.

Lot 28. Blake, “The Industrious Cottager” and “The Idle Laundress,” two plates after Morland. Printed in brown, the imprints and title inscriptions cut off. £80, Baskett & Day.

Lot 132. A Memoir of Edward Calvert, by his third son, 1893. This book, published in only 350 copies, is particularly valuable because it contains original impressions of Calvert’s six wood engravings and two copperplate engravings. Over the last few years several copies have been disbound and the prints sold individually. £480, A. K. Henderson. Another copy, lot 277, £550, G. Raffy.

Lot 199. Muir facsimiles of Visions of the Daughters of Albion, The Book of Thel, Songs of Innocence, Songs of Experience, Milton, and There is no Natural Religion, handsomely bound in three volumes. £375, Maggs.

Lot 370. A collection of over 700 engravings and woodcuts after designs by Thomas Stothard, a few executed by Blake. Some of the prints are proof impressions, but none engraved by begin page 55 | ↑ back to top Blake. £60, Mushlin.

Lot 174. The Dramatic Works of Shakespeare, Boydell’s ed., with “numerous engraved plates,” presumably including the one engraved by Blake after Opie, 9 vols., 1802. Another copy, said to be a “large paper” folio in poor condition, sold at Sotheby, London, 14 June 1973, lot 190. Prices and buyers not known to me.

Thirty-seven lots of Blake related materials were sold, mostly books with reproductions of Blake’s paintings and drawings. The most important item was lot 56, the 1926 portfolio containing restrikes of the Grave illustrations, which sold for $275. Lot 78, a first ed., first issue of Swinburne’s Blake: A Critical Essay, sold for only $20.

Lot 357. A letter by William Etty, dated 25 March 1830, with an anecdote concerning Sir Thomas Lawrence and Blake. £170, Maggs. Now in the author’s collection.

Lot 54. Novelist’s Magazine, the plates only, bound in 4 vols., presumably including the engravings by Blake. 70 guineas, Walford.

Lot 92. Erasmus Darwin, The Botanic Garden, with the plates by Blake, first ed. of Part I, 1791. Price and buyer not known to me.

Lot 27. Blake, Illustrations of the Book of Job, 1927 quarto reproduction with an inscription from Keynes to John Trevor. £18, Quaritch.

Lot 269. Edward Young, Night Thoughts, with Blake’s engraved illustrations (some discolored, some cropped), and the leaf of explanation, 1797. The title-page to Night the Third is reproduced in the catalogue. £480, A. Solomon.

Lot 273. B. H. Malkin, A Father’s Memoir of His Child, lacking half-title, 1806. £28, A. K. Henderson. This rare and important work continues to be one of the few Blake books still undervalued.

Lot 281. Blake, a portfolio of the illustrations to Blair’s Grave with 1813 imprints, issued in the late nineteenth century. £70, Maggs.

Also in this sale were 23 lots of reprints and critical works on Blake. These 63 volumes in all brought a total of £464.

Lot 134. Muir facsimile of Europe, 1887. £10, Maggs. This copy was very badly dampstained and mildewed (hence the low price), but has since been restored to near perfect condition.

At the time of writing I have not been able to obtain a price list.

Lot 30. Blake, Songs of Innocence, Pickering, 1868; The Poems, Pickering, 1874; Illustrations to Thornton’s Virgil, intro. by Keynes, with impressions from the electrotypes in a folder, Nonesuch Press, 1937.

1972-73 were also active years for dealers participating in the far from desolate Blake market. Several noteworthy catalogues were published, begin page 57 | ↑ back to top as listed below.

As item 148 in his List XLI Breslauer offered page 12 from the Blake-Varley Sketchbook, containing eight caricature heads by Blake, for £285. The sketch, now in the collection of Mr. and Mrs. Raymond Lister, is reproduced in the catalogue. Breslauer had purchased the leaf at Christie’s on 15 June 1971 for 160 guineas. Catalogue 102 offered “The Ghost of a Flea” from the Blake-Varley Sketchbook (item 95, reproduced) for £3,800. Breslauer purchased the drawing at the Christie’s sale for 2,000 guineas.

Item 32. Thomas Stothard, “The Battle of Ai,” pen and grey wash drawing engraved by Blake for Kimpton’s Universal History of the Bible, 1781. The drawing is reproduced, along with the published engraving as it appeared in Maynard’s edition of Josephus and the reversed proof in the Rosenwald Collection. No price is given since the drawing was sold to the Rosenwald Collection of the Library of Congress before the catalogue appeared. Included is a brief article by Ruthven Todd with comments on the drawing and its relationship to Blake’s engravings.

Item 3. Blake, sketch of a standing archer from the Blake-Varley Sketchbook (reproduced). $4,550. The sketch was purchased by Zeitlin at Christie’s, 15 June 1971, for $3,044 (and previously offered in his catalogue 228 for $4,550). Apparently this is one of the few Blake items for which there is some market resistance.

P. & D. Colnaghi, London. Original Printmaking in Britain 1600-1900, Fall 1972. This splendid exhibition and catalogue included a number of important works by Blake and artists of his circle.

Item 109. Fuseli, “A Woman seated by a Window: Evening thou bringest all,” lithograph, first state (reproduced). £600.

Item 111. Blake, “The Fly,” from Songs of Experience, relief etching, beautifully color printed and heightened with watercolors (reproduced). £1,200. Now in the collection of Mr. and Mrs. Raymond Lister.

Item 138. Palmer, “The Vine” or “Plumpy Bacchus,” etching, first state signed “S. Palmer” below each design by the artist or his son. £130. The early state and inscriptions make the print much more valuable than later impressions.

Item 140. Palmer, “The Rising Moon” or “An English Pastoral,” etching, undescribed state between fourth and fifth of nine. £140.

William Weston Gallery, London, Catalogue 10: The English Vision, October 1973. Included in the catalogue is a note by Graham Sutherland describing the influence of Blake, Calvert, and Palmer on his own work. All but items 31 and 37 are reproduced. The catalogue includes prices in both pounds and dollars, as listed here.

A total of 76 Blake items are listed in the catalogue, one of the largest collections offered for sale in recent years. Most volumes are reprints and critical works of only minor interest to collectors, but the following important books are included.

Bertram Rota, London, Spring 1973 catalogue. Among a collection of books from the library of W. M. Rossetti were the following Blake items.

Item 142. Remember Me! Wanting some plates, but with Blake’s “The Hiding of Moses.” £20—an amazingly low price for this rare and beautiful engraving. Rota was immediately deluged with orders.

Keynes, Bibliotheca Bibliographici, A Catalogue of the Library Formed by Sir Geoffrey Keynes, 1964. £16.

Blake’s Illustrations for the Book of Job, the engravings, including proof states, pencil sketches, and monochrome reproductions of all watercolors. With a new catalogue raisonné by Keynes. Prices not yet set.

The Song of Los. 8 color plates. Prices not yet set.