A Fan Design by Blake

The issue of the Blake Newsletter for spring 1972, listing Blake’s works in the British Museum Print Room, refers on p. 226 to the verso of Binyon 321↤ 1 Lawrence Binyon, Catalogue of Drawings by British Artiste . . . in the British Museum, I (1898), 127. The sheet was presented to the Museum in 1874 by John Deffett Francis, register no. 1874. 12. 12. 147. as: “Design for a fan (probably not by Blake).” This entry seems to have been derived from Binyon’s own description which reads: “Design for a fan. An oval with Cupid and Psyche. Not by Blake.” In spite of this categorical rejection, the Newsletter checklist, with its “probably,” reflects a doubt not unnaturally engendered by the fact that the fan design is on the same sheet as a characteristic pencil study of Blake’s maturity, sketching an idea for a title-page;2↤ 2 See Blake Newsletter (Spring 1972), repro. no one has ever disputed the authenticity of this.

The contrast between the loose, rapid pencil drawing of the title-page study and the neat, brightly colored decoration on the reverse is sufficiently great to have prompted the reaction that, when he made the rough sketch, Blake must have used a scrap of paper from some other artist’s portfolio. The lower half of this reverse side of the sheet3↤ 3 Overall measurements 26.3 × 38.2 cm. is empty; in the center, near the top, is an oval vignette measuring 7.9 × 12.4 cm. [illus. 1 & 2]. The subject is drawn in pencil, colored with bright pink, mauve and green watercolor, and strengthened with some outlines in pen and black ink. Above it a few curling sprays of foliage, with pink buds, soften the hard oval. To the left, a little below the central horizontal axis of the oval, is a putto with a loop of blue drapery, carrying a torch; to the right, opposite him, a fairy with small wings, curling yellow and pink drapery, and a garland. A sinuous tendril of scant-leaved ivy describes an arc over all three groups suggesting, as Binyon saw, that the drawing was conceived as a decoration for a fan. This is borne out by the typically fan-like placing of the central vignette, a common feature on fans of the late eighteenth century, often contained in just such an oval and frequently flanked, like this one, with supporting figures or ornaments. Binyon was wrong, however, in identifying the subject as Cupid and Psyche, since the girl holds a pen or stylus and not a lamp: it shows the incident of the “Corinthian Maid” or the daughter of Dibutades the potter, who, as Fuseli put it, “traced the shade of her departing lover by the secret lamp”;4↤ 4 John Knowles, Life and Writings of Henry Fuseli (1831), II, 25 (Lecture on Ancient Art). the incident, in fact, known as “the Origin of Painting,” used by Joseph Wright of Derby and many other Neo-classicists, and actually engraved, in one version, for use on fan-leaves. 5↤ 5 The designer is not known. See Lionel Cust, Catalogue of the Collection of Fans and Fan-leaves presented to the Trustee[e] of the British Museum by the Lady Charlotte Schreiber (1893), p. 76, no. 61. Wright’s painting is now in the collection of Mr. and Mrs. Paul Mellon.

The choice of subject is not typical of Blake, who rarely used Classical sources, preferring (when he was not concerned with his own private myths) to illustrate English history or literature: his Edward and Elenor 6↤ 6 Blake’s engraving after his own painting (now lost) is catalogued in Keynes, Engravings by William Blake: The Separate Plates (1956), no. VI, pl. 11. It is dated 1793 but was perhaps executed considerably earlier. and The Penance of Jane begin page 60 | ↑ back to top 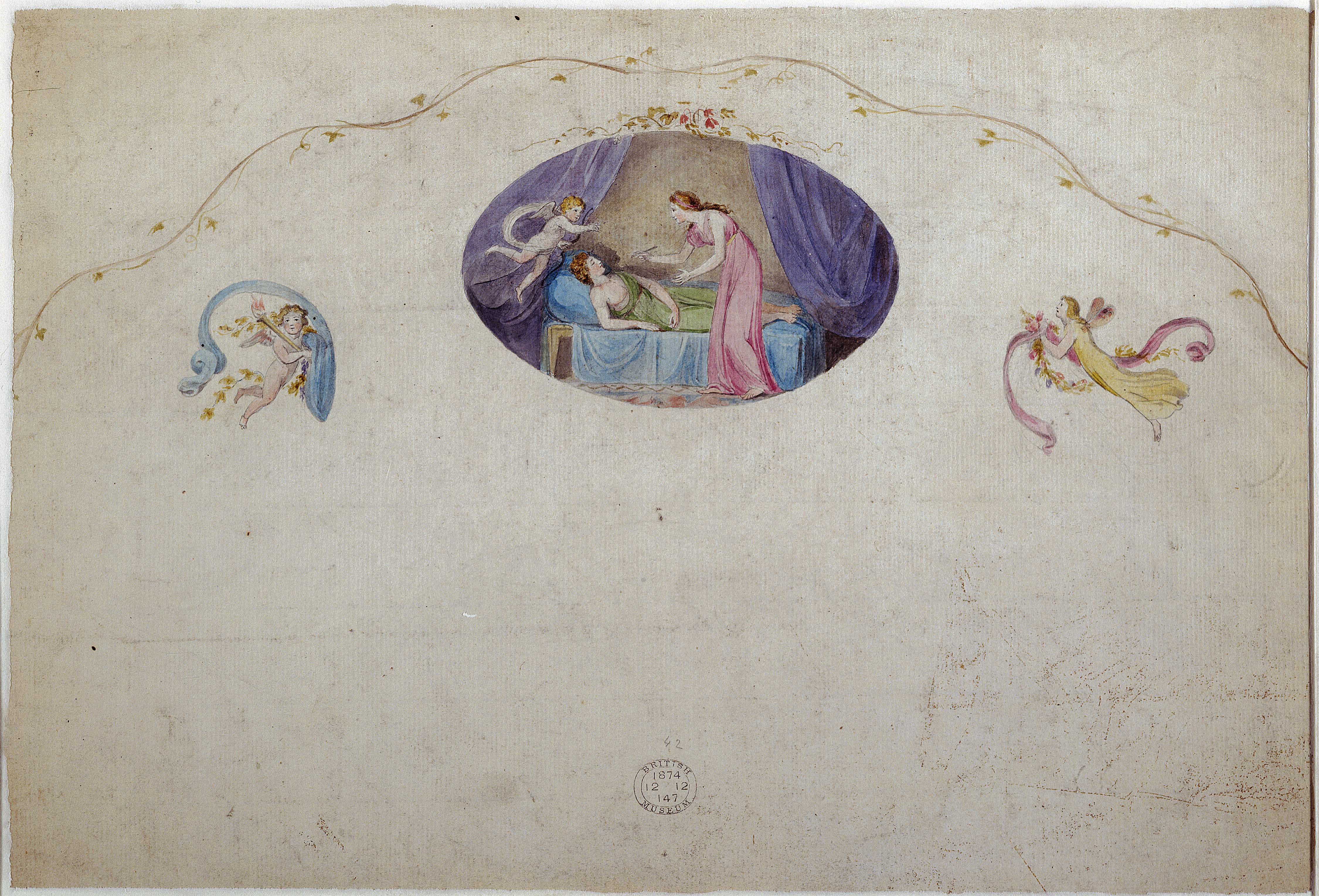 1 Blake’s design for a fan.*
↤ The pictures on pp. 60-63 are reproduced by permission of the Trustees of the British Museum. 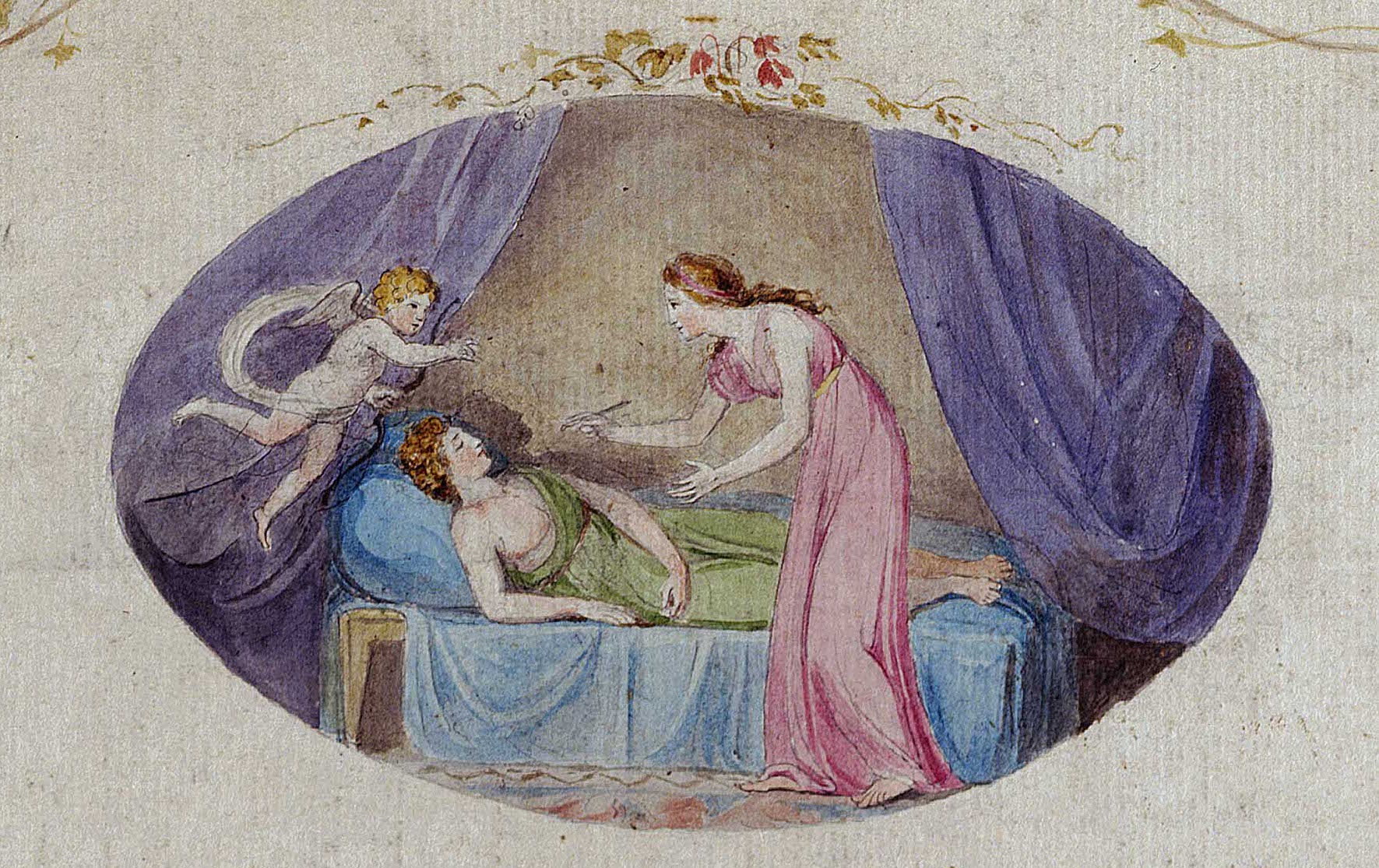 2 The central oval for the fan design, slightly enlarged.
begin page 62 | ↑ back to top 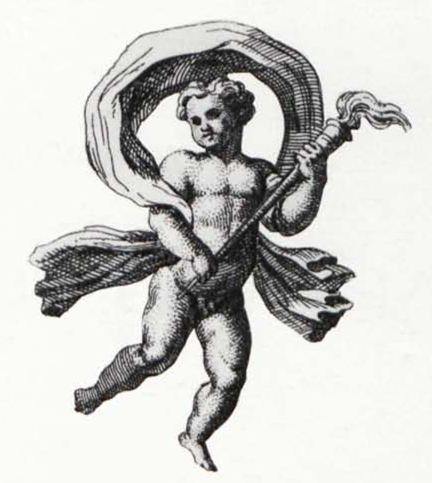 3 “Morning Twilight,” from the Abbe Montfaucon’s Antiquity Explained.
Shore 7↤ 7 Produced about 1778. Now in the Tate Gallery. are early examples. The theme, and the simple, stark design, have something in common with the Classical fantasies of Romney; but the drawing of the pen outlines, and the color, are very much Blake’s. At first sight it is precisely in its color that the work seems farthest removed from Blake; but there are close parallels in the coloring of some of the designs which he was producing in the early 1780s. The small sketch of the composition of the Death of Earl Godwin, of about 1780,8↤ 8 British Museum, register no. 1964. 12. 12. 13. The finished drawing was exhibited at the Royal Academy in 1780 (no. 315). for instance, makes use of similar yellows and of the characteristic lavender-mauve; and, on a larger scale but with something of the same concentration, so does the dramatic design of Saul and the Witch of Endor, dated 1782.9↤ 9 In the New York Public Library, Department of Prints. It is to some date such as this that the drawing under consideration should be assigned; Blake was at that time about twenty-five years old. If the colors, intensified and concentrated as they are here in a decorative context, recall the sweet, sugar-icing palette of Adam’s decorators—Angelica Kauffmann and Biago Rebecca, for example—we should not be surprised: it was the kind of influence which any young artist of the period would have absorbed, and one particularly well suited to the ornamental purpose of the fan.

The composition itself, on the other hand, anticipates the mature Blake and furnishes the most striking evidence of his authorship. The upright figure beside a body stretched horizontally on a bed recurs, with increased austerity and grandeur, as the titlepage of Songs of Experience in 1794 (an early specimen of several comparable death-scenes by Blake). Here the recumbent figures are starkly supine, the arms rigid and not relaxed as in the fan vignette; but the stooping posture of the mourners is close to that of the Corinthian Maid, whose bent left leg is also echoed by the foremost of them.10↤ 10 Compare also the pose of such figures as that on the right of Ruth and Naomi in the Victoria and Albert Museum. Even the figure of Cupid, flying in diagonally at the left of the vignette, is remembered in the 1794 plate, though transmuted into a robed spirit floating above the principal scene, to the left of the title lettering. This type of fairy, in a long curling gown, is characteristic of Blake’s decorations and is closely prefigured in the right-hand “supporter” of the fan design. Unlike the Cupid, which has conventional angel or bird’s wings, this figure is equipped with the small butterfly wings which are occasionally to be found in Blake’s evocations of fairyland.11↤ 11 For example, on p. 1 (pl. 3) of The Book of Thel; and, larger, in the “Sunshine Holiday” illustration to Milton’s L’Allegro in the Pierpont Morgan Library. The device is unusual at this date, although it was sometimes used by Neo-classical artists;12↤ 12 Such as Richard Westall and Henry Howard. Butterfly wings were also used by Baroque artists, especially the French. They seem to derive from those in the Raphael School Marriage of Cupid and Psyche in the Villa Farnesina, known through the engraving of Nicolas Dorigny in Psyches et Amoris Nuptiae ac Fabula (Rome, 1693), and consciously imitated by James Barry in his composition of Pandora (a drawing now known only from an engraving by Louis Schiavonetti). it looks forward to Victorian painters of Faerie such as Doyle and Noel Paton.

By contrast, the left-hand supporter is taken directly from the Classical antique. Its loop of drapery recalls those of Poussin’s nymphs, and of their Roman originals, especially those found in Pompeian wall-paintings. The putto may be assumed to represent Cupid again: the torch is as much an attribute of the god as the bow which Blake shows him holding in the principal scene; but, just as the fairy has no obvious symbolic function, this figure too may be simply a decorative motif. It does, however, allude unmistakably to the Roman figure of a boy holding a torch and a veil which is reproduced in the Abbé Montfaucon’s Antiquity Explained,13↤ 13 Bernard de Montfaucon, L’Antiquité Expliquée et representée en figures, 5 vols. with 5 supplementary vols. (1719); translated into English by D. Humphreys as Antiquity Explained and represented in Sculptures (1721-25). See the Supplement, Vol. I, pl. 4 and facing page. and stated there to represent “Morning Twilight” [illus. 3]. The position of the arm holding the torch differs slightly from Blake’s design, but we should not expect Blake to copy any image precisely. In fact, the arm and torch of his putto can be exactly paralleled in a very similar figure in Pietro Testa’s etching of the Season of Spring, a print well known to eighteenth-century collectors.14↤ 14 Bartsch XX, 36.

A more immediate instance of the putto-and-torch motif is to be found in one of the vignettes which Blake himself engraved after designs by Thomas begin page 63 | ↑ back to top Stothard for Joseph Ritson’s Select Collection of English Songs, published in 178315↤ 15 In 3 vols., I, 170. See A. G. B. Russell, The Engravings of William Blake (1912), p. 145, no. 55 (vii). [illus. 4] It shows a Magdalen-like figure leaning mournfully against a rock while two cupids fly away from her. One carries a flaming torch, the other a bow and quiver; this second also has a loop of drapery fluttering in an arc. Both the putti of Blake’s fan design are thus to be found together in this vignette. Another illustration to the same book16↤ 16 I, 157. Russell, no. 55 (vi). Reproduced in Raymond Lister, William Blake, an Introduction to the Man and to his Work (1968), pl. 2. shows Cupid standing with a lamp behind a lady who is penning a love-letter by moonlight; here, beyond the incidental appearance of Cupid, there is no direct connection with the fan design, but it is worthy of note that the whole scene, with figures confined to the extreme left and the background a plain wall broken only by the vertical of the door-post and the moon beyond, is of an austerity unusual in Stothard and altogether closer in spirit to Blake.17↤ 17 The Blakean character of the illustrations for Ritson was noticed by Gilchrist in his Life of William Blake, 2nd ed. (1880), I, 51; quoted by Russell, no. 55. The compact rectangular format of these vignettes is not far removed from the oval of Blake’s fan, and it seems at least possible that the latter was executed while Blake was at work on the engravings. It is certainly reasonable to point to Stothard as a link between the youthful Blake and the earlier generation of Neo-classical decorators.

Although Blake turned his hand to conventional book-illustration like Stothard’s, and occasionally produced designs to order for commercial and other purposes,18↤ 18 Such as his advertisement for Moore’s Carpet and Hosiery Manufactory; see Keynes, Separate Plates, no. V, pl. 10. there are few instances of his work as a decorative artist in so overtly frivolous a vein as this fan-leaf. It is impossible to say precisely why it was drawn, or why it was never cut out and used, but its probable date of around 1782 prompts the sentimental conjecture that it was intended for Blake’s new bride, Catherine, whom he married in August of that year.19↤ 19 Gilchrist, I, 41. At about the same time he was introduced by Flaxman to the circle of Mrs. Mathew,20↤ 20 Gilchrist, I, 43. and the drawing might have been a response to the more elegant social milieu which Blake encountered there. These however are suggestions without circumstantial support, and they must therefore remain speculative and largely fanciful. 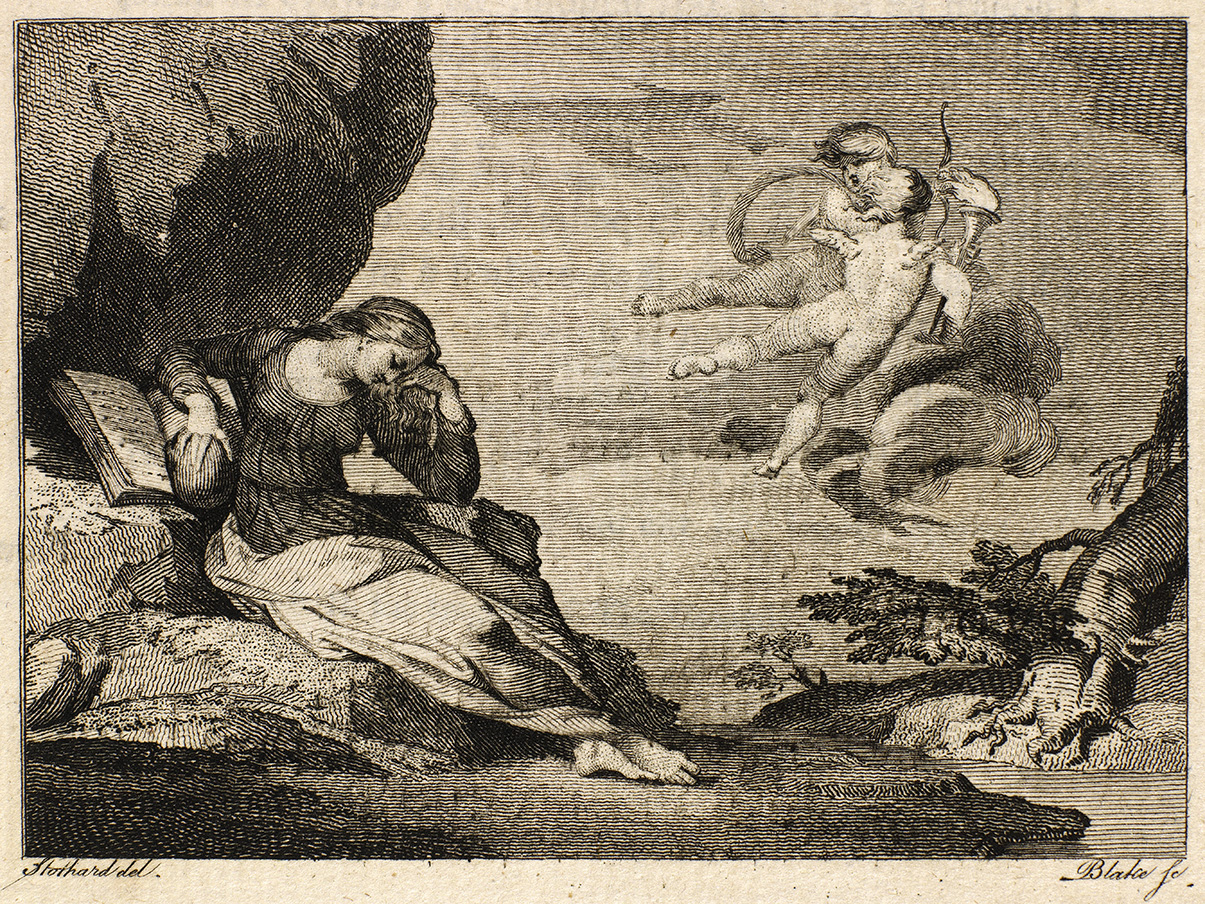 4 A vignette engraved by Blake after Stothard for Ritson’s Select Collection of English Songs.