Blake’s Text for the Enoch Drawings

Five of William Blake’s drawings after the apocryphal Book of Enoch, now housed in the Rosenwald collection of the Library of Congress, were at one time in the possession of Allan R. Brown, who attempted to explain the drawings and their relation to one another by matching a passage in The Book of Enoch to each of the drawings.1↤ 1 “Blake’s Drawings for the Book of Enoch,” The Burlington Magazine, 78 (1940), 80-[85]. Brown does not cite the version of Enoch he used in his commentary, but his observation that a translation of Enoch was published in Blake’s lifetime has led succeeding scholars to believe that Brown had used the translation available to Blake. On the contrary, Brown used a translation, by R. H. Charles, that did not appear until some eighty-five years after Blake’s death.2↤ 2 The Book of Enoch or 1 Enoch: Translated from the Editor’s Ethiopic Text (Oxford, 1912). Brown may have used, instead, The Book of Enoch, ed. W. O. E. Oesterley[e] (London, 1917), which uses Charles’ 1912 text but which was distributed in a popular edition by the Society for Promoting Christian Knowledge. The only text available to Blake was one translated by Richard Laurence in 1821.3↤ 3 The Book of Enoch the Prophet (Oxford, 1821). An earlier translation of a portion of Enoch exists in pamphlet form in the British Museum: Aristeas, The History of the Angels and their Gallantry with the Daughters of Men, trans. Mr. Lewis (London: J. Hooke and T. Caldecott, 1715), pp. 179-96. But since it is mentioned neither by Laurence or by Charles, it is unlikely that it was known in Blake’s time. Brown, in addition, took liberties with even the Charles text, by not indicating omissions in the text he printed and by interpolating some passages into the midst of others without indicating that he had done so. Following Brown without comment and also without citing any specific Enoch text, Geoffrey Keynes reproduced the five drawings in his Blake’s Pencil Drawings, Second Series (1956).

While my note does not offer an alternative interpretation, it does seek to demonstrate that Brown’s reading of the Enoch drawings rests on the use of a text that Blake could not have seen. Although he may be correct in reading some of the drawings according to passages in the Charles translation, Brown’s case for others becomes much less compelling when we compare those passages to equivalent passages from the Laurence translation.

The first two drawings, [A] and [B], (as numbered by both Brown and Keynes) might well, as Brown claims, represent the descent of the angels, their union with “the daughters of man,” and the consequent birth of the giants. But Brown prints as a single, continuous narrative what are actually selections from several chapters of the Charles translation and which, in some cases, are worded quite differently in the Laurence translation. The following parallel transcription indicates the extent of Brown’s alterations of the text: begin page 83 | ↑ back to top 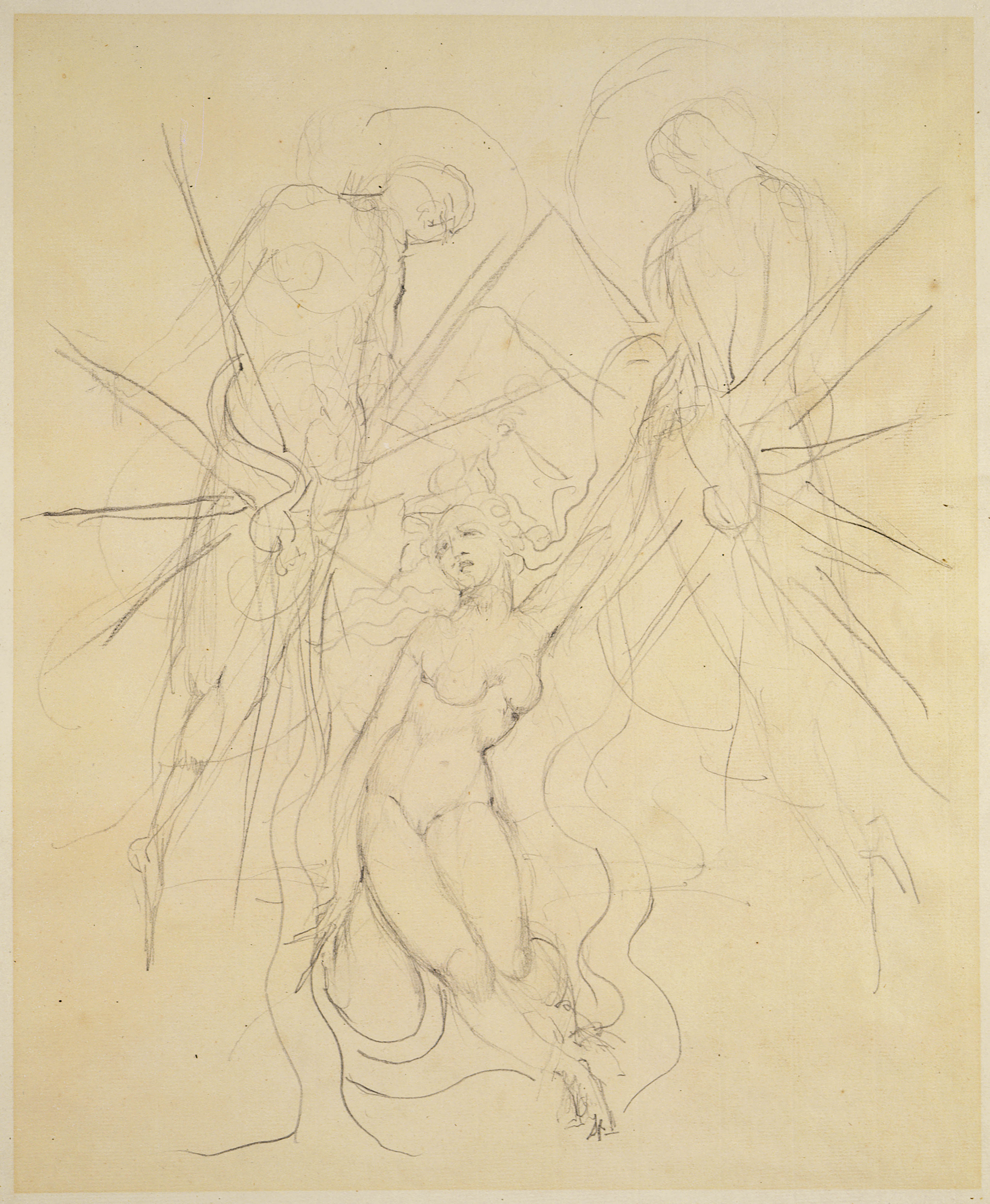 [A] The Book of Enoch: “Two Angels Descending to a Daughter of Man” (?).   National Gallery of Art, Rosenwald Collection. 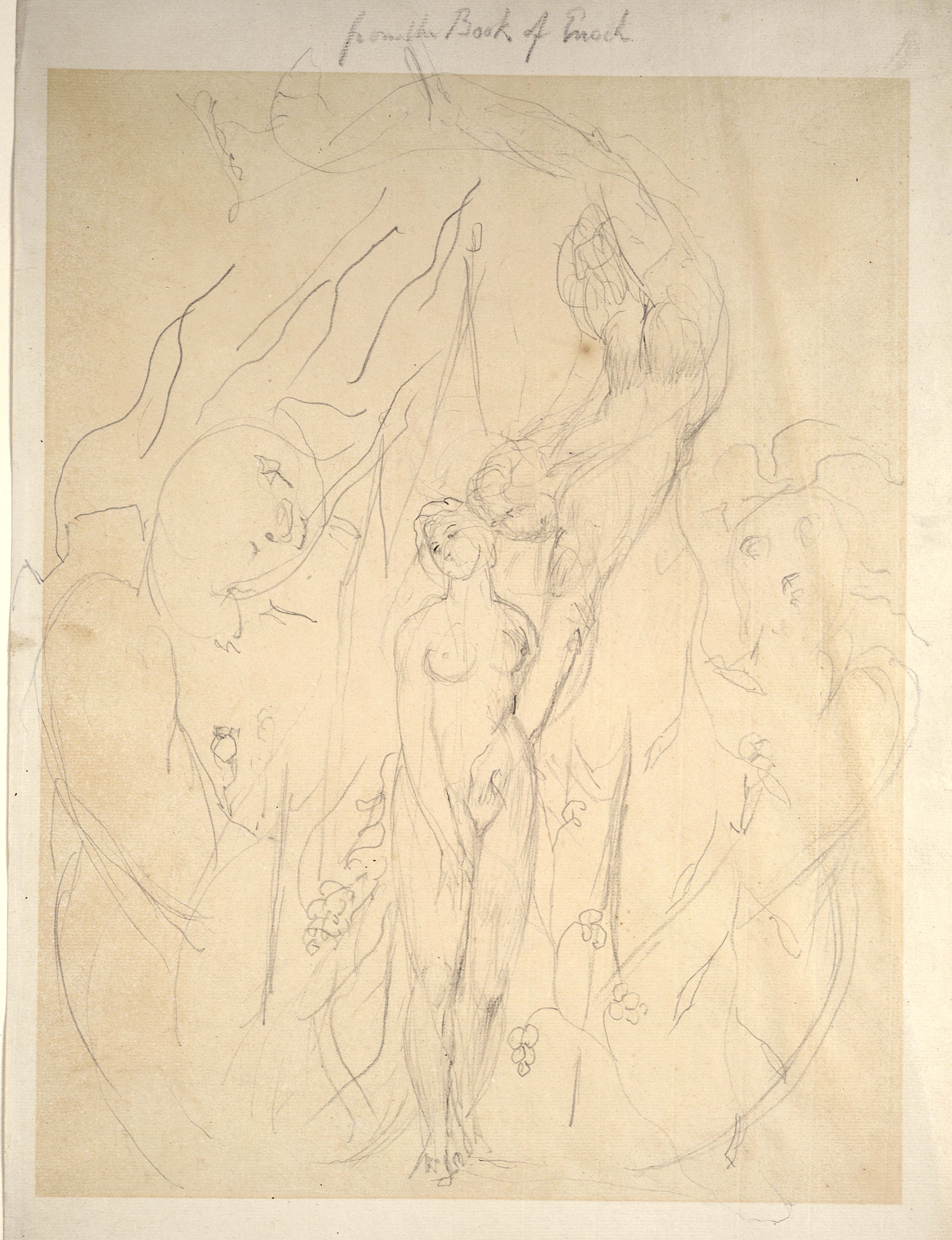 [B] The Book of Enoch: “An Angel Telling a Daughter of Man the Secrets of Sin” (?).   National Gallery of Art, Rosenwald Collection.

↤ 4 I have followed the divisions into chapters and verses of both the Laurence and the Charles text.

Brown has thus radically simplified the Enoch text, leaving out anything that does not fit into what he takes to be a version of the fall in Blake’s myth: the descent into generation, the subsequent dominance of the female and the chaos that results.

As further evidence that the two male figures in the first drawing [A] represent the angels descending to the daughters of men, Brown, followed by Keynes, calls the puzzling shapes at the loins of the male figures “phallic attributes.” In explanation he alludes to one of Enoch’s later visions where the angels, as Brown says demurely, “with somewhat disconcerting bluntness are so represented” (p. 83). The context of this later vision is an allegory of the history of Israel which recapitulates the story of the descent of the angels in terms of animals: the daughters of men as white cows, the angels as stars and the begin page 84 | ↑ back to top 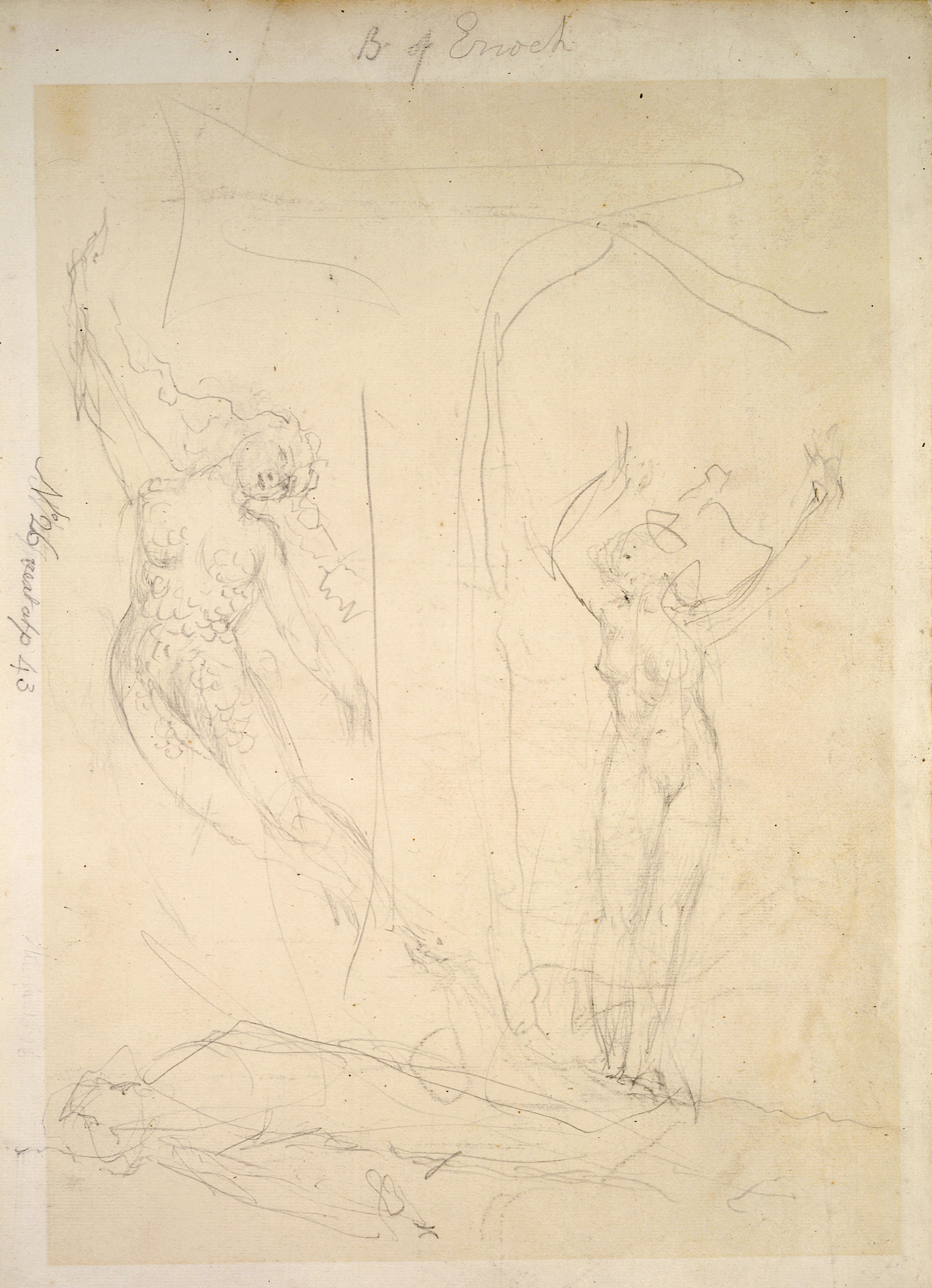 [C] The Book of Enoch: “Daughter of Man as Siren” (?).   National Gallery of Art, Rosenwald Collection.
resulting monsters as elephants, camels and asses. Laurence translates this part of the allegory as follows:

[LXXXV.4] . . . I saw many stars which descended and projected themselves where the first star was, [5] Into the midst of the young ones; while the cows were with them, feeding in the midst of them. [6] I looked at and observed them; when behold, they all protruded their parts of shame like horses, and began to ascend the young cows, all of whom became pregnant, and brought forth elephants, camels and asses.

In spite of Brown’s incorrect report of the text available to Blake, then, the first Enoch drawing [A] probably does illustrate the descent of the angels to the daughters of men. And the second drawing [B], with a descending angel whispering secrets into the ear of an acquiescent female figure and with large forms emerging on either side, might further illustrate, as Brown claims, the teaching of forbidden knowledge together with the emergence of the giants, as narrated in chapter VII of Laurence’s translation, quoted above. Brown’s interpretation of the set of five drawings, though, depends upon what he considers a sequence in which the third drawing [C] represents the consequences of the actions portrayed in the first two, connecting [B] and [C] by what he sees as a “scaly covering” (p. 83) on the descending angel in the second drawing. While the scales on the arising female figure of the third drawing are clearly a part of its iconography, the scales that Brown sees on the angel of [B] are, at the most, conjectural and motivated more, it seems, by the demands of Brown’s argument than by a close observation of the drawing.

The most serious difficulty, however, arises with Brown’s interpretation of the drawing that he calls the third of the sequence, [C], which he, followed by Keynes, has entitled, “The Daughter of Man become a Siren.” For evidence, Brown prints this part of the Charles text as if it continued immediately after the passage about the rampage of the giants, quoted above. But in The Book of Enoch the crucial final part of the passage that Brown offers as evidence does not appear until some eleven chapters after the episode of the descent of the angels. Brown conflates the passages as follows:

And there arose much godlessness, and they committed fornication and were led astray and become corrupt in all their ways. And the whole earth was filled with blood and unrighteousness. And the women also of the angels who went astray became sirens. (p. 83)

In both translations, moreover, the episode of the descent of the angels and their seduction of the daughters of men is treated as a kind of historical narrative which precedes the actual prophetic visions of Enoch. The final sentence that Brown has taken from the Charles translation begin page 85 | ↑ back to top 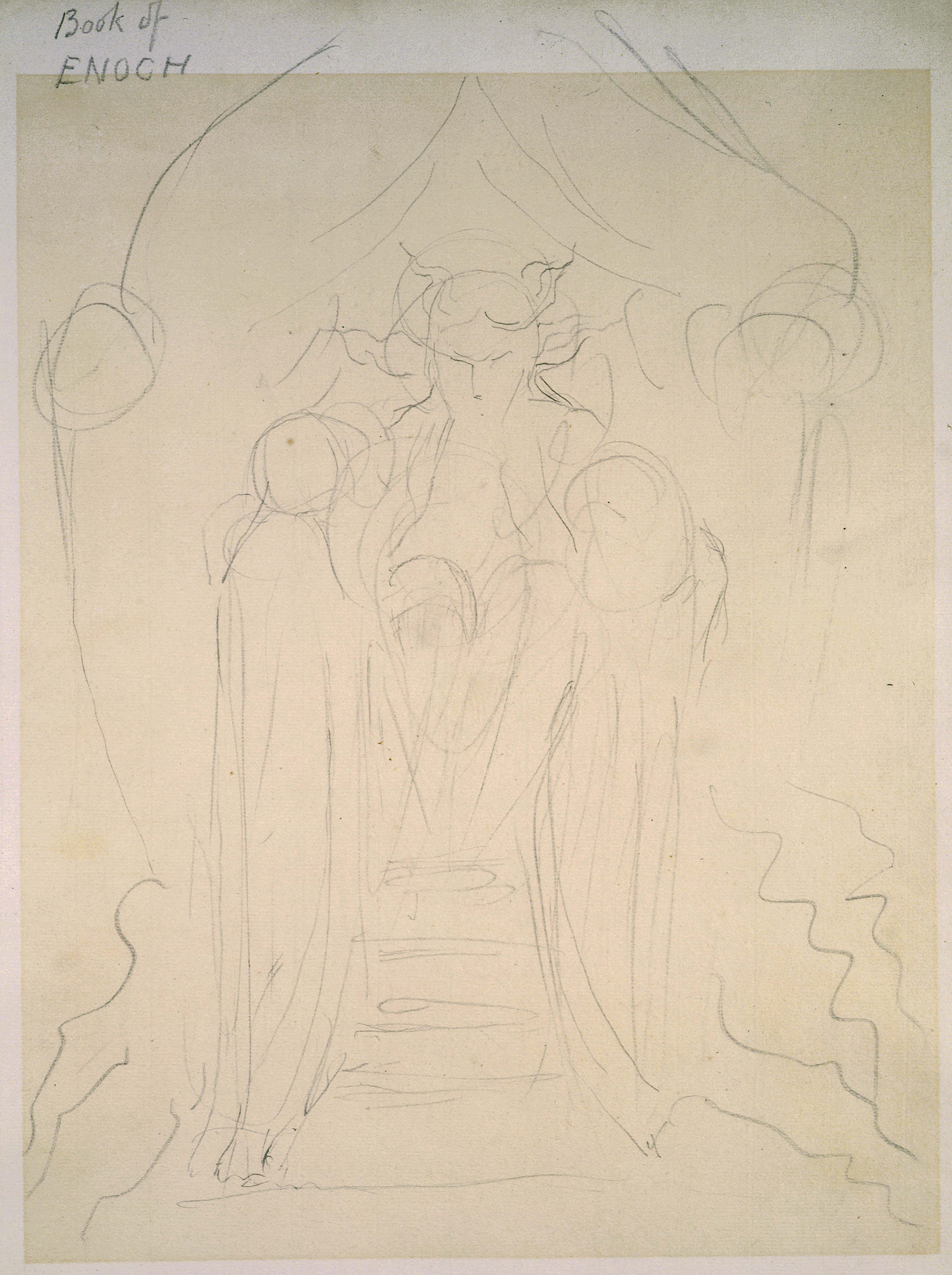 [D] The Book of Enoch: “Enoch Standing Before the Throne of the Great Glory” (?).   National Gallery of Art, Rosenwald Collection. 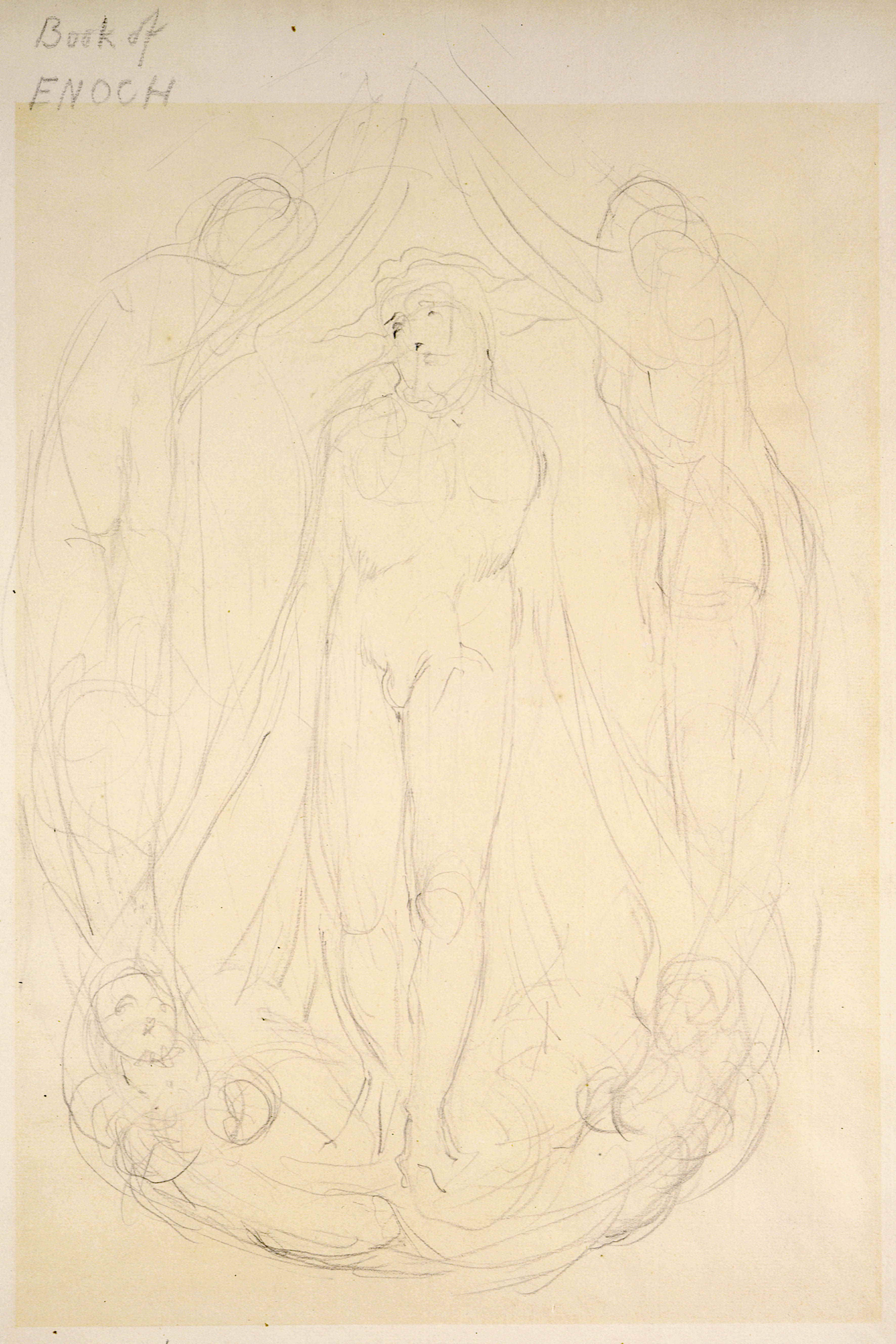 [E] The Book of Enoch: “The Son of Man as the Messiah, with Four Attendant Spirits” (?).   National Gallery of Art, Rosenwald Collection.
does not appear until one of these later visions in which Enoch is shown by the angel Uriel the place where the reprobate angels and the women with whom they have sinned are to be punished. Indicating no interruption of text or change of narrative mode here, Brown has conflated three separate passages into one, as revealed by the following parallel transcriptions: In identifying the woman of [C] as a siren, then, Brown has reached a conclusion that Blake could not have intended from the text available to him, a text that does not use the word sirens or anything like it.

If the first three drawings constitute the Blakean version of the fall, according to Brown’s interpretation, the next two, [D] and [E], constitute a countervailing movement, the apotheosis of the prophet Enoch and the appearance of Jesus as the Messiah. Accordingly, the fourth drawing [D], in which two figures kneel before another figure seated on a throne, illustrates one of Enoch’s visions wherein he appears, according to Brown’s caption, “with an angel before the Great Glory” (p. 83). The passage that Brown quotes, but again does not cite, comes from the fourteenth chapter of the Charles translation which ends:

And one of the holy ones came to me and waked me, and He made me rise up and approach the door: and I bowed my face [Brown: “head”] downwards. . . .

Although this passage accounts for the two figures before the throne in Blake’s drawing, the equivalent passage in Laurence does not admit this second figure:

[XIV.24] Then the Lord with his own mouth called me, saying; Approach hither, Enoch, at my holy word.
[25] And he raised me up, making me draw near even to the entrance.

There are, however, at least two other passages later on in the Laurence translation of Enoch in which the prophet is brought before the throne of the Almighty, and in both of them the text portrays Enoch presented by an angel.5↤ 5 Chapters LVIIIa and LXXX.

The last of the five drawings [E], according to Brown’s ordering, with its four female figures begin page 86 | ↑ back to top encircling the central, Christ-like figure, might, as Brown proposes, illustrate the passage he suggests from the Charles translation:

Seeing the four figures of [E] as the four spirits enumerated in the Charles text, Brown associates them with “counterparts [emanations?] of the four archangels [Zoas?]” (p. 84). Here again, though, Brown has modified the Charles text considerably, printing as prose what Charles has rendered as verse, and omitting, without indication, some nineteen verses in the middle of the scene that he reports from Charles. The text to which Blake had access translates the relevant passage in a slightly different manner:

Although this passage could be read as distinguishing four separate spirits, the punctuation and the absence of a plural on the 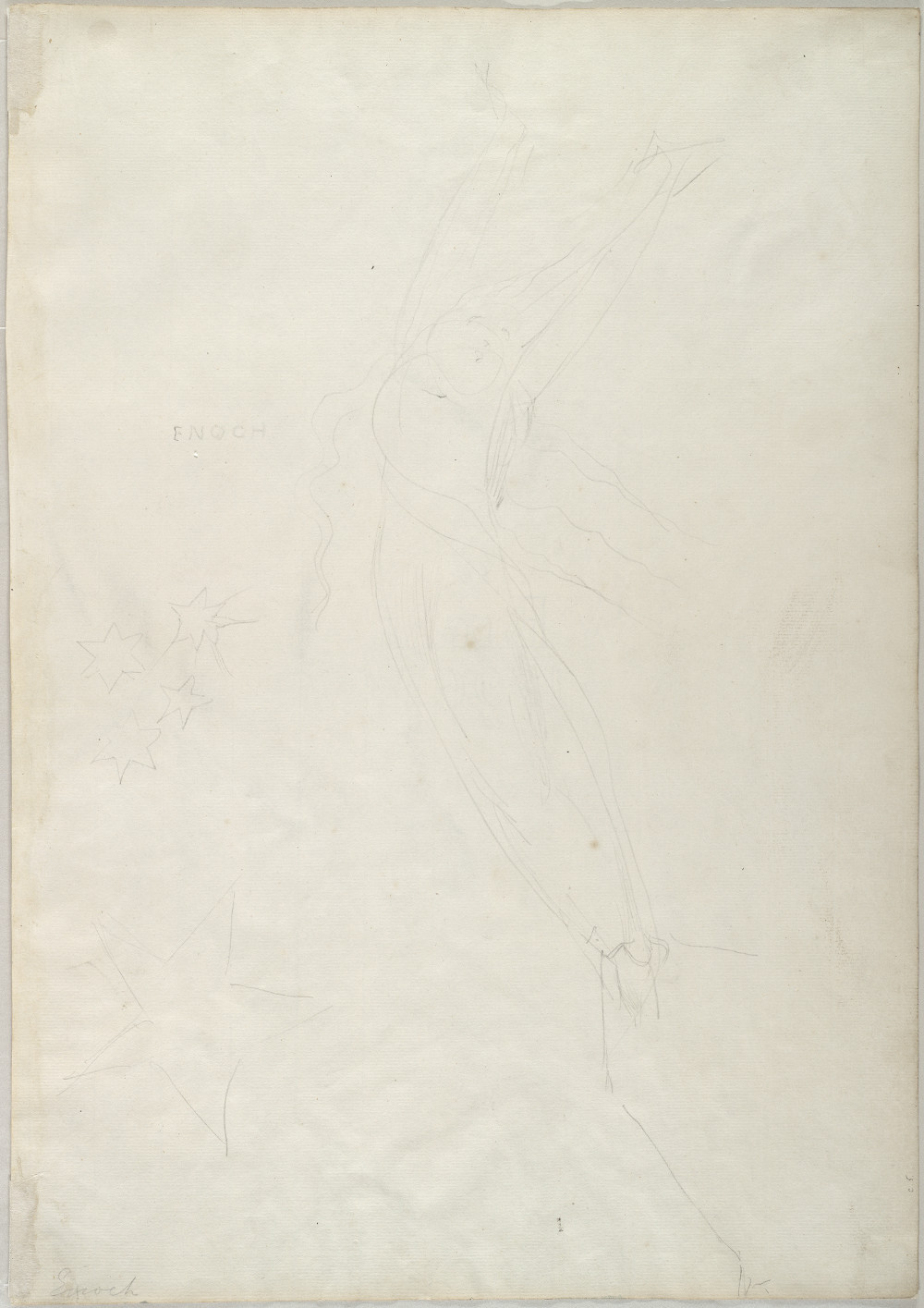 [F] The Book of Enoch: the sixth of the series, recently discovered by John E. Grant on the verso of Blake’s “Circle of Carnal Sinners,” one of the Dante designs.   Reproduced by permission of the Fogg Art Museum, Harvard University.
word spirit in the phrase “the spirit of instruction and of power” makes the argument somewhat less compelling. Rather than illustrating the triumphant Messiah and “the fourfold nature of man” (p. 84), as Brown interprets it, the drawing could as easily illustrate Blake’s notion of the “generation” of Jesus by a collective female will, analogous to the Jesus in The Four Zoas who assumes “the dark Satanic body in the Virgin’s womb” (8.241).

Considering the five drawings as a complete set, Brown’s interpretation seeks to trace through them the whole Blakean cycle from the fall to the triumphant reappearance of the Messiah. However, an additional Blake drawing for Enoch [F] has recently been discovered by John E. Grant, making the sixth so far to come to light. This discovery renders suspect any such simple correspondence as that proposed by Brown, and it suggests that Blake may have done still other drawings, any of which may lead us to reformulate our notions about how the individual drawings relate to one another and about how Blake interpreted the Laurence translation of The Book of Enoch. Allan Brown may not have been a Blake scholar, but his conclusions have for too long been accepted by those who are. Though this note does not propose an alternative interpretation of the Enoch drawings, it will at least have begun to sweep the interpreter’s parlor.