VDA: The Frontispiece and a Crucial Line In “A Crucial Line in Visions of the Daughters of Albion,” Blake Newsletter 23 (Winter 1973), pp. pp. 72-73, Roland A. Duerksen suggests that, contrary to the generally accepted view, the bound figures in the frontispiece are not Oothoon and Bromion but rather are representations of the states of terror and meekness bound by a Bromion who is not pictured in the plate. In support of his view Mr. Duerksen points to Bromion’s assertiveness, his boast of owning slaves and his tyrannical disposition. While it is true that these qualities and acts are Bromion’s, they do not automatically preclude the depiction of Bromion as a manacled, fear-ridden figure, though they do indeed raise a crucial question about the force that binds him.

In order to accept this interpretation of the frontispiece, we must accept several questionable assumptions: First, because Bromion is a tyrant, slave-holder and, one should add, rapist, he cannot also be horrified at his own acts, perhaps even at himself. In other words, his face cannot be “fear-distorted.” Second, because Theotormon despairs and seems abject, he cannot also be capable of rage, jealousy and the will to bind and thus punish “the adulterate pair.” Finally, because Oothoon is freer in plate 4, she cannot be bound in the frontispiece.

The problem with this logic is that it imposes too static an interpretation on the illuminations. It does not allow for either the “narrative progression” or the evolving vision clearly conveyed in the words and successive designs of the poem. One might as plausibly argue that Oothoon cannot appear in a cloud above Albion’s daughters in plates 7 and 8 because there is a chain on her ankle in plate 4.2 And yet she does. (I do not agree with the assertion that the chain around Oothoon’s leg “appears loosened” in the detail of plate 4, for it seems securely fitted to her distinctly tapered ankle.) I think Bromion is indeed pictured in the frontispiece, just as it is he who appears, bearded, with arms folded in a curiously passive gesture, bearing down upon Oothoon in a thunder-cloud on the title-page; that Oothoon, so daunted initially by her ordeal (Bromion’s and Theotormon’s cruelties) that she cannot speak or even weep, is the meek, bound female figure in the plate. If so, who does have the will and the power to bind them? The answer is suggested, in my opinion, in two additional lines of plate 2:

Then storms rent Theotormon’s limbs: he roll’d his waves around / And folded his black jealous waters round the adulterate pair. (2:3-4)

It is easy to be deflected by Bromion’s tauntings and Theotormon’s representation of himself as a pathetic victim from realizing that he is also a furious, vindictive lover. His rage is clearly indicated in the lines quoted above, and his sadistic pleasure at Oothoon’s physical suffering and at her brief acceptance of his judgment of her is apparent: He “severely smiles” as the eagles rend her (2:18).

There seems to me no convincing reason to assume that Theotormon’s enfolding of the “adulterate pair” and the binding of terror and meekness are not the same act. Because Theotormon seems passive in the frontispiece, we need not assume that he is powerless. It is reasonable to assume that the illumination depicts the moments after the “folding” or binding and that the apparently passive Theotormon is not so much a helpless onlooker as a brooding, self-pitying participant. If so, then the freedom or enslavement of the three main characters depends upon Theotormon’s will to accept or resist perversely the wholeness and love Oothoon embodies. In the light of this interpretation, it is right that Bromion should be given no further attention by Blake in the illuminations after the frontispiece or by Oothoon (after 3:1), whose instincts correctly tell her to address Theotormon and Urizen.

It is significant that Theotormon’s feelings toward Oothoon are more consistently punitive and rejecting than are his feelings toward Bromion. There is a curious affinity between aggrieved lover and rapist: Theotormon thinks Oothoon a harlot no less than Bromion. Both are puritanical, and in their view, Oothoon’s move toward imaginative and sexual freedom (the plucking of the flower) makes her deserve to be raped and then requires that she be punished for her impurity. Theotormon’s ambiguity toward Bromion stems in part from the fact that he both approves and disapproves of the rape. He is indeed a “sick man’s dream,” a type of spiritually poisoned humanity which must defile in order to be able to reject the innocent, lovely gratification Oothoon offers. Theotormon and Bromion can accept only two categories of existence, good or evil. The freedom of imagination that transcends these categories is worse than either, because dangerous begin page 93 | ↑ back to top 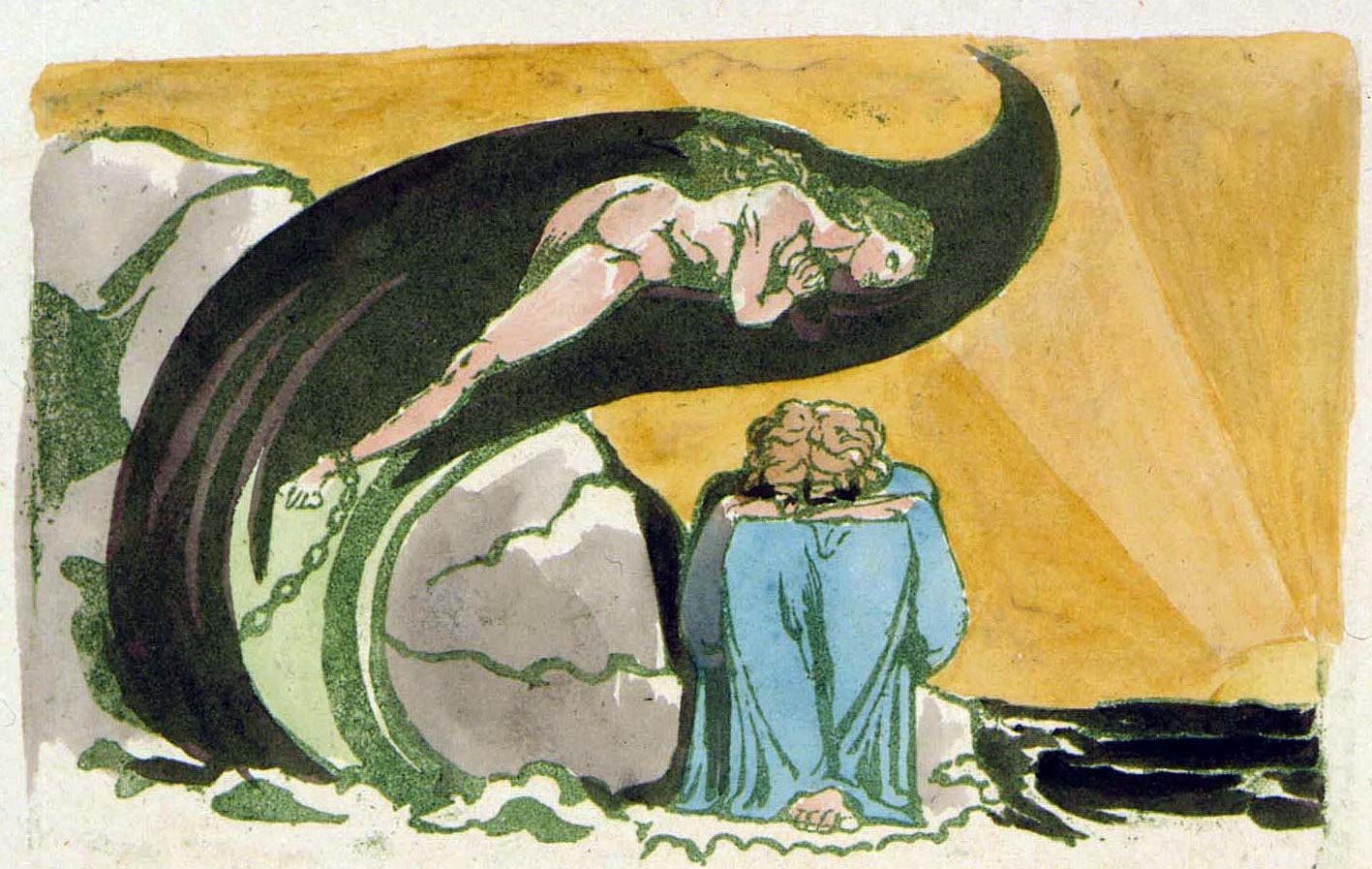 [View this object in the William Blake Archive]
to a narrow vision, and must be annihilated. In a sense, Bromion embodies the spectrous, life-denying impulse within Theotormon, and it may be that he is sent or willed by Theotormon to defile and thereby arrest Oothoon’s move toward liberty. At the very least, Theotormon endorses Bromion’s judgment of Oothoon, as his own treatment of her indicates. The relationship between these three characters anticipates Blake’s concepts of emanation and spectre.

This interpretation of Theotormon’s controlling role in Oothoon’s ordeal is supported, I think, by two elements in the poem and qualified by a third. 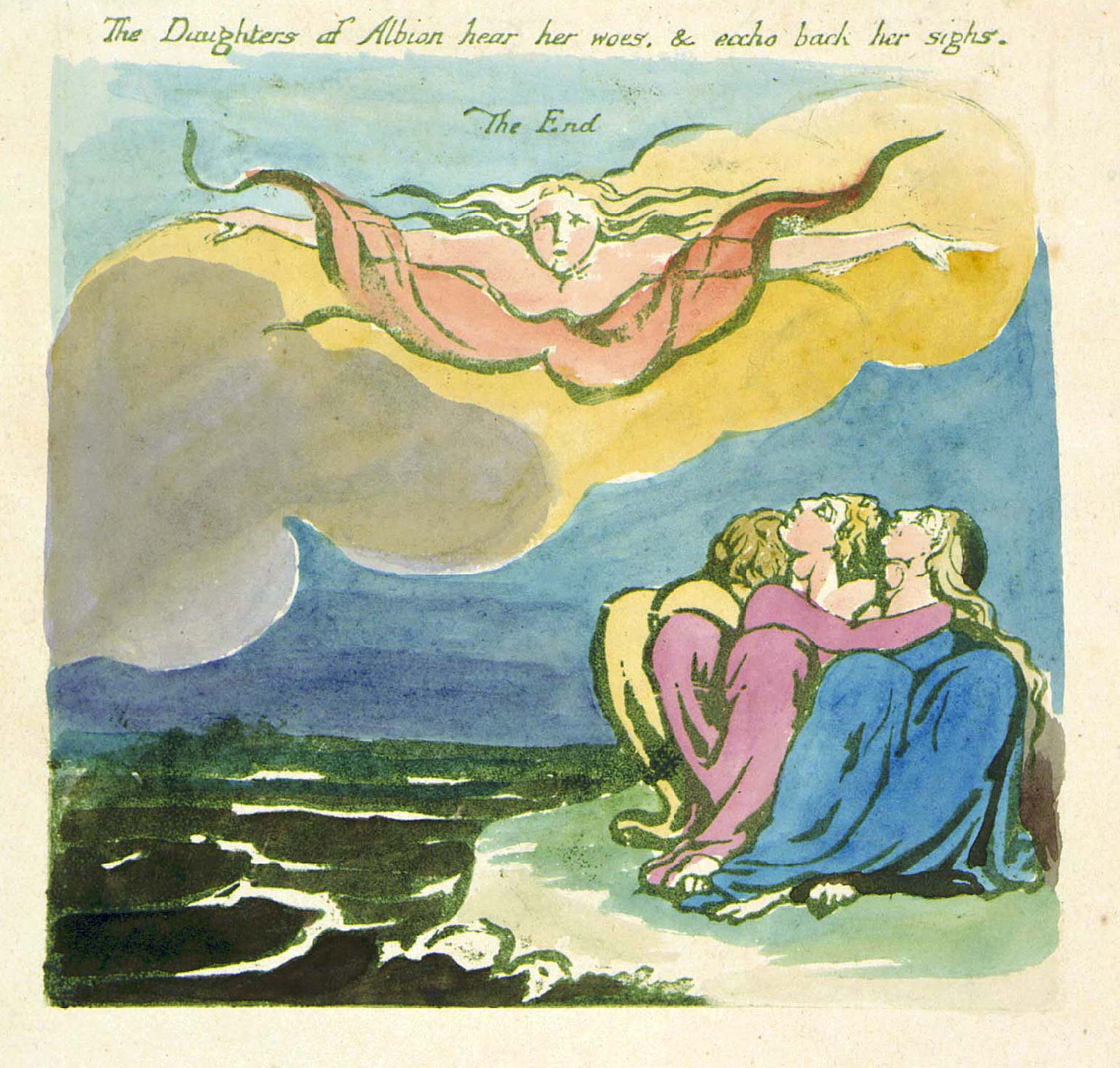 [View this object in the William Blake Archive]
The detail of plate 6 shows a female and male figure; the latter holds a scourge as if to strike the distraught female whose hands cover her face. Oothoon’s words on this plate clearly express her growing awareness, a flowering of the imagination that might deliver her from the death-like single vision of Theotormon and Urizen. But the illumination represents another aspect of the unfolding vision, for Oothoon is still vulnerable to her lover’s judgment, shamed by his belief that she is a whore. Although she is pictured as physically unshackled and her words show her to be intellectually freer than at any earlier point in the poem, she is not entirely free from Theotormon. Indeed, the final lines of the poem suggest that she cannot be free, that she is doomed—“Thus every morning wails Oothoon” (8:11, italics mine)—because Theotormon will not hear. As with a man and his emanation, their destinies seem inextricably intertwined. The passion and beauty of Oothoon’s triumphant final speech would be tragic, chillingly hopeless were it not for the mitigating effect of the design of plate 8. Oothoon appears, David Erdman suggests, in a thundercloud portending storm and change. Also, the clouds to the lower left are funnel shaped, like a tornado. Oothoon flies toward Albion’s daughters, one might note, from the left or West. She is still the “soft soul of America,” though now a stronger impulse toward freedom; she has weathered the deadly storm unleashed upon her precisely because she moved to take her bliss. With the detail of the final plate, the horror of Oothoon’s relationship to Theotormon is lessened and the work has come full circle: Oothoon has progressed from one pursued by a flame-wrapped terror in a cloud (title page) to the embodiment, mantled in flame, of liberating vision riding apocalyptic clouds.