Reviewed by Irene H. Chayes*↤ Irene H. Chayes, who lives in Silver Spring, Maryland, has published many critical essays and reviews on Blake and the English Romantics. Under a 1974-75 grant-in-aid from the ACLS, she has been continuing research for her work on Blake’s art. Most recent publication: “The Marginal Design on Jerusalem 12,” Blake Studies, 7 (Fall 1974), 51-76.

What is genuinely praiseworthy in this book is indirectly a tribute to an aspect of Blake’s originality which is not always appreciated by his readers and critics. In the first two chapters primarily, and from time to time later, Frosch responds to the intellectual suggestiveness of the poetry in intellectual terms, completing fragmentary patterns of ideas, conceptualizing baffling images or relationships, or drawing unexpected analogies with the thought of writers in other periods. His formulations are interesting in themselves, and if some exceed the evidence of the texts, they usually are sufficiently Blakean to be persuasive at least as historical possibilities. Both Frosch and Blake appear at their best in these interludes, and a promising study of a different kind might have grown out of the beginnings made under the headings of “Perspective,” “The Vortex,” and “Center and Circumference” in particular.

The heterogeneous company of authors Frosch cites or quotes in parallel with Blake includes a number whose names recall earlier juxtapositions by Harold Bloom (Shelley, Ezekiel, Sergei Eisenstein) or Geoffrey Hartman (Wordsworth, Rilke, Gaston Bachelard, Sartre, Maurice Merleau-Ponty). Others—Marshall McLuhan, R. D. Laing, Norman Mailer—reflect topical interests at the probable time of writing. The favored authority, however, is D. H. Lawrence, the late, doctrinaire Lawrence who presented himself as prophet to the England of a more recent time than Blake’s, and it was evidently his example, reinforced by a speculation of William Godwin’s about the perfectibility of the physical human body, that led Frosch to try to reconcile Blake’s overt anti-naturalism (a word Frosch uses in more than one sense) with a conception of the body and the senses which as it is expressed in the subtitle is to be understood literally. Frosch is most successful in his quasi-Lawrentian approach when he is discussing Blake’s sex motifs, especially those, such as anti-genitality and the physiological role of the Emanation, which for one reason or another some commentators have hesitated to acknowledge. But the special demands of Frosch’s thesis require him in turn to deny that the “pompous high priest” passage in Jerusalem commends what Norman O. Brown a few years ago called the “polymorphous perverse,” and yet elsewhere to maintain that sexuality, though “absorbed,” is nevertheless present in the state of restored harmony in Eden.

When he deals with the senses, a more complex subject, Frosch proceeds by a series of omissions, exclusions, and displacements which seriously weaken his critical discussions of the poems, chiefly Jerusalem, in the two later chapters. Although he gives the key position in his subtitle to the word “body,” he does nothing with and indeed says nothing about the traditional images—the psyche as a society in miniature and the cosmos as a magnified human body—out of which Blake’s myth of Albion and the Zoas arose; the “caverned man” is a running motif, but he mentions Plato only once, in incidental rejection. Similarly, although the book jacket reproduces “The Sun at his Eastern Gate,” from the Milton watercolors, part of whose effect depends on a recollection of the Apollo Belvedere, Blake’s modes of representing the body in his designs are never considered. The extent of Frosch’s attention to Blake’s graphic art is his observation in a note that its “anti-naturalistic” style “by itself, works against the given eye” (p. 199). Ignoring the famous eidetic visions, he assumes that Blake consistently opposed the “tyranny” of the sense of sight, and claims for the ear configurations of imagery which actually may acquire a very different character when they are rescued from the misleading isolation of the typographic page, to which Frosch restricts himself, and are set beside relevant designs among the original plates. Los’s description of Jerusalem on J 86 and the last paragraph of text on J 54 are two passages cited as “auditory pictures” which, although they elude Frosch’s exceptionally narrow criteria for a “naturalistically perceived visual scene,” include images that are both visualizable and graphically visualized. The most difficult image in the passage quoted from J 54 is in fact exactly illustrated in Blake’s accompanying design—which is not consulted.

To Frosch, anti-naturalistic imagery in poetry, such as that in Blake’s supposed “auditory style,” or the metaphoric synaesthesia in familiar passages from Coleridge and Shelley, is part of a literal reorganization of the senses through which the body is to be “renovated,” on analogy with the resurrection of the fallen Albion, and which it is the function of art to bring about. In this respect, Frosch perhaps has in mind (at some remove) the Romantic strategy of giving the processes of sense perception a place in the operation of the imagination and thereby enabling art to challenge epistemology and aesthetics on their own ground. If to Wordsworth the mind helps to create what it perceives, in the description at the conclusion of Jerusalem the mind that creates perceives its own creations, as artist and spectator at once. Frosch, however, turns the strategy upside down and makes the end of Los’s labors the “increase” of perception until it can become “simultaneous with creation”; to open the doors of perception until the “vision of the prophet” is “finally attained by all men” (p. 95). begin page 115 | ↑ back to top Frosch insists on precisely these terms, disagreeing with Peter Fisher and Northrop Frye that for Blake perception is essentially a mental act (pp. 28-29 and 187); with Frye that Blake’s New Jerusalem is “the total form of all human culture and civilization” (p. 153); and with Hazard Adams and Karl Kiralis that the poem Jerusalem is written as an “example” of the Divine Vision (p. 157). Instead: “In Blake the goal of art is the moment at which it becomes unnecessary, because the whole of life has taken on the character of art. . . . It is the job of fallen art to reorganize the natural body, to awaken it to its self-induced limitations and its real potentialities, until it regains the capacity to arise and enter Eden by itself. In this transformation, what we now recognize as art disappears: when Albion enters the furnaces, Los drops out of the poem, consumed with all else in his Sublime Universe” (pp. 158-59).

The relations of artist and non-artist in this account are based on the circumstances of Albion’s resurrection near the end of Jerusalem, yet in Blake’s text the situation is the reverse of that outlined by Frosch. It is of course Albion who sacrifices himself, or believes he is sacrificing himself, to save Los, his “friend,” in whose guise Jesus becomes visible to him, and if Los disappears from the narrative at this point, it is presumably to take his rightful place in the reintegrated cosmic psyche. Moreover, by all indications of the same text, Eden is inhabited (metaphorically speaking) only by the restored Zoas and, on another level of the analogy involved, the Eternals, who very possibly are joined at the last by the redeemed William Blake. The only available counterpart of Frosch’s lower-case plural, “all men,” is Blake’s “Public,” which in his prefaces to the four chapters of Jerusalem he addresses both collectively and through its major sects. But although the aim of his rhetoric is to bring these groups to an eventual rejection of error, how and when that particular Last Judgment is to come about remains outside the bounds of the poem; the Jews, the Deists, and the Christians are left to work out their own salvation according to the three different prescriptions given in the prefaces. Again, when Frosch’s undifferentiated “men” are renovated by the instant therapy of art, they enter an Eden which is described in an elusive mixture of the figurative and the literal: “we enter the images in body, in a new life, and together with all men” (p. 159); “acts and bodies are like poems, each one serving its maker for a moment” (p. 182); “the responsibility of man for his life is a kind of poetic work and the final products are no longer books but realized human lives” (p. 176). Despite faint echoes of the language of the last plates of Jerusalem, this is not in any way comparable to Blake’s exalted vision of a supremely creative, universal consciousness, acting through the totality of human faculties and both animating and apprehending the worlds it brings into existence. Like the sacrifice of Los, Frosch’s conception of Eden as a commune of the post-literate is a creation of his own, imposed on the situation in Blake’s poem, and its orientation away from both the artist and the art-work tells more about current socio-cultural attitudes than about Blake.

Like a small number of other recent writers on Blake,1↤ 1 See my review of Wittreich and Curran, eds., Blake’s Sublime Allegory, in Studies in Romanticism, 13 (1974), 161-63. Frosch seems to believe that the only alternative to a repetition of the older, received interpretations is a continual search for novel variants and ingenious reformulations, like the “new visions” in which on his last page he urges us to “keep on creating and responding” to the “reality” Blake’s poems purportedly describe. This undoubtedly would be Frosch’s justification of his unacknowledged shifts from what Blake actually says to what might be said in terms similar to Blake’s (an illegitimate extension of the conceptualizing paraphrases) and the silent alterations he makes in the meanings of narrative episodes and verse passages which a few pages away he may have shown he understands perfectly well. Yet The Awakening of Albion is offered as the study of a theme “in the poetry of William Blake,” and Frosch does violence to the poetry and its author by his distortions not only of specific texts but also and more especially of Blake’s own views of art, which in actuality were the most uncompromising of all held by the Romantics. “To actualize the metaphor in the conditions of our own time and space is to translate the imaginative into the natural, not to raise ourselves to Eden but to bring it down to our level. In this way the desire for a resurrection gives birth to the Hermaphrodite.” This insight occurs in one of the early sections (p. 85), in a comment on Blake’s parodies of Eden and resurrection. It might stand as a judgment on much of the remainder of the book, in which the body that is renovated ultimately turns out to be only the Hermaphrodite reborn. 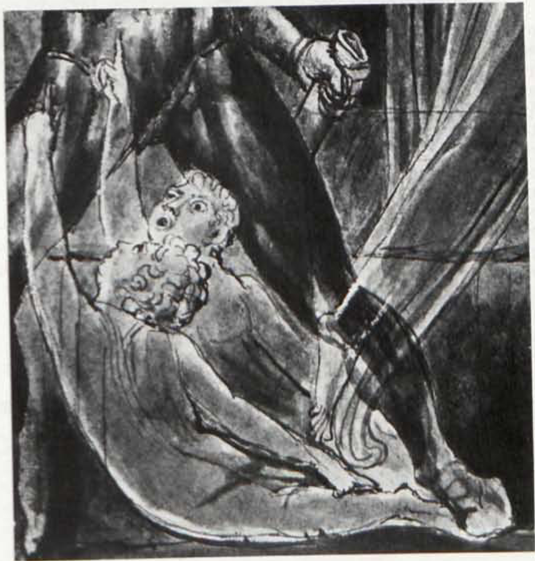