Reviewed by David V. Erdman*↤ David V. Erdman is busy preparing editions of The Illuminated Blake, Blake: Prophet Against Empire (a second time), and The Poetry and Prose of William Blake.

This is a book to be taken seriously, read carefully, consulted frequently. It must make an irreversible revision of our understanding of “Bacon & Newton & Locke”; of Urizen and his World; of what Blake meant by systems; of Blake’s visionary cosmos. It is an absorbing piece of scholarship to work one’s way through, but one needs to summon all one’s powers as philosopher, historian of science, and lover of contraries; also all one’s experiences (while reading Blake) of what Ault teaches us to recognize as “the tendency in Blake to project the elements of Newton’s calculus as ‘process-myth.’ ” And still one is not done, and one feels that it will take an analytic re-reading (of Ault and Blake, not to say Newton) and much hard work to prepare even a simple classroom lecture on Blake and Newton, or on Blake and scientific imagery. At least these are the thoughts of a not very philosophical non-historian of science faced with the wish to make immediate classroom use of the ideas in Visionary Physics.

Let me start with the problem explored in Chapter 2, “Blake’s Visionary Response: Science as System and Metaphor.” Descartes and then Newton, in paradigms structured to explain the same phenomena, erected contending world systems. When by the mid eighteenth century the contention was won by Newton’s paradigm, all sorts of philosophical problems were dealt with in terms of Newtonian imagery and doctrine. The assumption of the truth of Newton’s system gave to the imaginary entities such as “the void,” “attractions,” and “atoms” postulated as the underlying “realities” of nature, an existence “more real than the observed phenomena they were created to explain” (p. 50). To continue in Ault’s words:

“Because Newton’s system, and Descartes’ before him, submerged such powerful metaphors under a logically consistent structure of reality, it is no accident that Blake, looking at them as a ‘visionary,’ could appreciate the threat these powerful images posed to the human imagination.” What he had to do was appropriate and transform the supposedly “visualizable” concepts of these systems “into images in his poetry to operate symbolically.” They there derived a “critical begin page 129 | ↑ back to top aspect from their oblique references to scientific doctrines and positive aspects from their independent operation in the poetry as metaphors. . . . The fact that Blake assimilated such imagery and ideas into his poetry had a profound effect upon the kind of poetry he wrote. At the same time, Blake’s powerful intellectual and imaginative independence caused him to transform the materials in such a way as to shed considerable light on the intuitive bases of the scientific doctrines themselves.”

That is to say, a study of Blake’s use of Newtonian imagery and ideas turns out to be double-edged. It is not simply that with Ault’s help we can learn where Blake’s (or Los’s) counter-system to Newton’s system comes from. It is also that Blake’s penetrating critique of scientific terms and images, when fully grasped, rescues us all, as his contemporaries, from victimization by Urizenic pseudo explanations. It is not simply that Blake’s “void” and “vortexes” and “fluxions of an atom” are borrowed from (or stolen from) Descartes and Newton, but that Blake employs them creatively to clear our minds of the Newton within. “Blake even uses such fundamental mathematical terms as center and circumference in ways which would seem paradoxical to the typical eighteenth-century mathematician (and would perhaps be perplexing even to ‘occult’ readers since Blake also inverts their expectations for the ‘mystical’ use of center and circumference). . . . rather than causing the reader to focus on a closed set of solvable problems which can be explained in terms of a closed set of images, Blake’s poetry requires the reader to be constantly shifting his perspective and never to be willing to settle on a finite solution to a problem” (p. 51). For Blake, “progress” through the solution of finite problems is only movement into deeper delusion. “Blake can call as witnesses to this fact the contemporary social conditions which he so vehemently attacked.” They were “the necessary result of the focus on a scientific paradigm which was taken to solve the central problems of the world” (p. 52).

Identifying the physical structure of Newton’s worlds of appearance and reality ironically, Blake exposes them both as unreal “and at the same time makes this structure a mode of redemption” (p. 87). Ault helps us perceive this by taking the perspective of the “Newtonian component of Blake’s own consciousness” (p. 4). To recognize such a component in the first place, we must grasp that Newton himself (as literary critics of the Romantic poets have realized) was not content with purely mechanical explanations of nature, even though the great absolutes that are required to keep his system going emerge from analysis as static (like Swedenborg’s ultimate equilibrium). Taking this perspective inevitably involves Ault in explications of Blake’s myth and, as a final demonstration, of “The Mental Traveller.” Many clarifications of terms and allusions reward the reader along the way. To cite a small one: the “rolling of wheels As of swelling seas” in The Book of Urizen (3:29-30) refers “to Newton’s reduction of the motions of the tides to the motions of revolving planets (later Blake’s ‘Starry Wheels’)” (p. 99). A large one, in an explication of Urizen’s creating a vortex in Four Zoas 72:

It is significant that between the vortices there is void space, and that Urizen is not happy either when he is in a vortex he has created or in a void space between vortices. For, as soon as he creates a vortex, he finds himself in a Cartesian plenitude in which he cannot obtain a total perspective on the system he has created; and, once outside the vortex he has created, he is in a void which, ironically, is simply a vortex which has ‘ceased to operate’, for in Newton’s void, vortexes cannot be sustained. In Descartes’ system of vortices, there is no void space because the vortices operate conjunctively and are interconnected; Blake has transformed this image into a cosmology in which vortices can operate independently, but, once set into operation, assume all the characteristics of the Cartesian vortices. Urizen thus moves from the pole of total absorption into the system he has created to the pole of chaotic void, with no principle of restrictive organization, both of which Urizen finds necessary for his emerging Satanic psychology. In uniting the Cartesian system of vortices and the Newtonian void, Blake reveals their Imaginative consistency as polar aspects of the same psychological drive; Urizen can only solve his constant oscillation from vortex to void (that is, to vortex which has ceased to operate) by reintroducing his elaborate measuring instruments ‘to measure out the immense & fix The whole into another world more suited to obey His will.’ The world he creates is the Newtonian world of necessity . . . yet it is the world of Cartesian ‘Vortexes’. The context forces Urizen’s cosmology to be shakier and his binding to be much more tenuous than in the Second Night, for it is cast in the image of a ‘dire Web,’ ‘as the Web of a Spider . . . Shivering across from Vortex to Vortex drawn out from his mantle of years . . . ’. This image is strikingly similar to the illustrations . . . in eighteenth-century editions of Descartes’ Principia. Urizen’s ‘Web,’ however, is created to stretch across the void spaces between the vortices, and thus links the Newtonian and Cartesian systems in the extremely negative spiderlike web which is the best connection Urizen can make between these logically polar systems, both of which are simultaneously appealing and repelling to him. (pp. 149-50)

This “virtuoso achievement on Blake’s part” is matched by “Los’s creation of the sun from particles of light in The Book of Los [which] combines opposing optical and cosmological doctrines and imagery into a subtle attack against the imaginative lure of both Newton’s and Descartes’ systems.”

These excerpts will indicate the difficulty of compiling a brief report on Ault’s Visionary Physics—and the richness of its particulars. For begin page 130 | ↑ back to top some indication of its scope and variety, let me make one more selection of a particular that improves our knowledge of Blake’s mental world. In discussions of how the earth would appear if it were an infinite plane, Robert Smith (Compleat System of Opticks, 1738)

argues that there is a limit (optical, not mathematical) which is imposed on perception by the physiological nature of the eye, which, he argues, would cause the eye to convert a hypothetical infinite plane into an encircling and enclosing globe. . . . Blake surely would have interpreted such an account as a symptom of complete absorption into a vision of reality in which the globular shape of the eye becomes a symbolic analogue of the restrictions placed on infinity by the nature of the combined Newtonian-Cartesian cosmology. . . . Blake turns Smith’s idea inside out: instead of having the perceiver exclusively create the englobing forms, Blake has the combined Newtonian and Cartesian space, into which the individual enters, exert such physical forces as to transform the individual’s perception: once he has passed a vortex, the perceiver sees the infinity ‘roll backward behind His path, into a globe itself infolding; like a sun: Or like a moon, or like a universe of starry majesty.’ Blake thus collapses the Newtonian idea . . . that the vertex of the cone of perception is in the object with Smith’s implicit assumption that the vertex of the cone is in the eye itself and the cone extends outward. (pp. 159-60)

Obviously we can no longer do without mastering Cartesian and Newtonian cosmologies—while fiercely resisting their lure. At least we must absorb their “positives” from this learned account of Blake’s Response. Once again a painstaking investigation of some difficult aspect of Blake’s work and of his thought rescues us from the temptation to assume that whatever is not clear to our minds was woolly nonsense in Blake’s.

P.S.: A friend of mine who is a mathematician has now become my particular friend after reading Ault and discovering, with perturbation and delight, the infernal perspective on his profession. 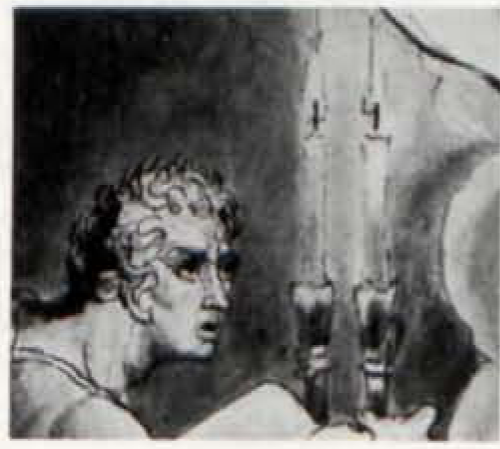