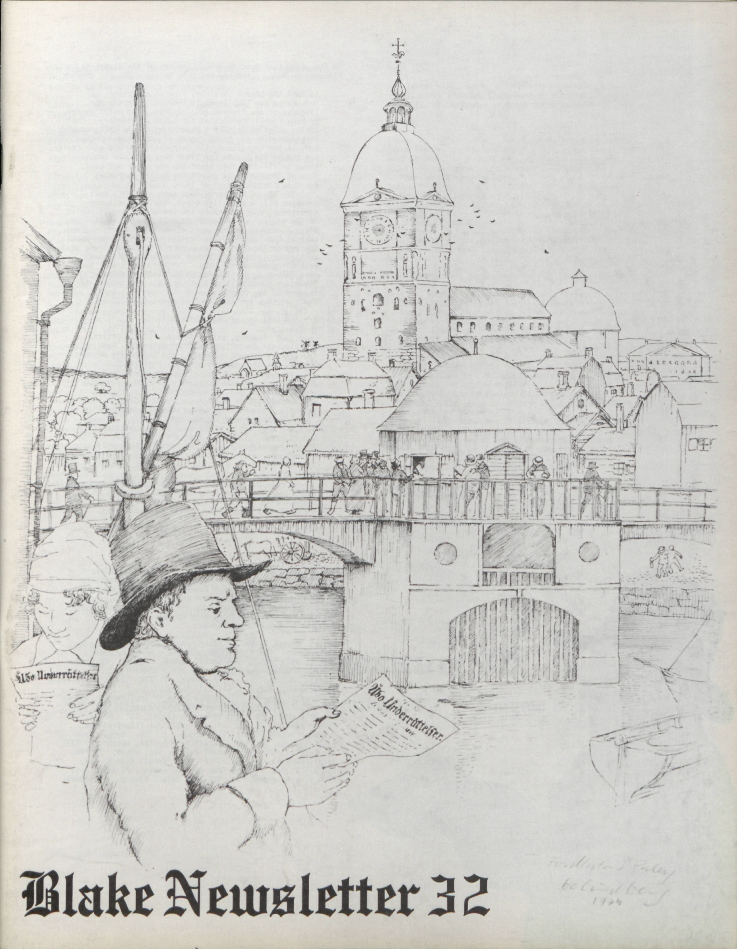 On the cover is a drawing by Bo Lindberg of the Blakes in Abo, Finland, in 1824. Lindberg had this to say about the drawing:

In 1974 the oldest surviving Finnish newspaper, Abo Underrättelser (published in Swedish, formerly the language of the Finnish intelligensia, and still spoken by many Finns), celebrated its 150th anniversary. The editor asked me to make a drawing of Abo in 1824, showing people reading the first copies of the Abo Underrättelser, and, in the background, the Cathedral, the old town center, and the bridge across the River Aura with the small kiosk on it—from this kiosk the newspaper was sold. None of the buildings except the Gothic Cathedral survived the great fire of 1827.
The Abo of the early 19th century was “a most infamous pit, a pestified place, having a poisoned atmosphere, poor pavements and the worst ‘esprit public’ in the world,” wrote Gustaf Mauritz Armfelt about 1800. Since Blake was in the habit of visiting infamous places such as Babylon and Hell, he must have made a spiritual journey to Abo—and, since a spirit is not a cloudy vapour or a nothing, his spirit must have had a solid body, resembling his mortal body. Further, it is well known that Catherine partook in her husband’s visions. Therefore I put William Blake and his wife among the readers of the first issue of Abo Underrättelser. Their clothes are more or less right for 1824.

Lindberg had this to say about himself:

Name. Bo Lindberg, called Ossian. I’m an artist, ethnological draughtsman and art historian, born in Abo in 1937, at present working at the University of Lund, Sweden. In 1973 my Ph.D. thesis, William Blake’s Illustrations to the Book of Job, was published in the Acta Academiae Aboensis. I’ve published a few papers about Blake, Bosch, the Cathedral of Abo, etc. I’ve translated part of Blake’s poetry into Swedish, but so far only The Mental Traveller has appeared in print.
I’ve modernised Satan’s Holy Trinity: Darwin, Marx and Einstein, and the prophet of the tripartite God is Freud. I believe that art and science are the foundation of empire. Hitler, Stalin, Roosevelt, etc., attend upon and follow scientists, writers and prophets like Darwin, Marx, Einstein, etc., which shows that Blake was right again.
I like Blake because his philosophy is too complicated and too truthful for political, economic and bureaucratic leaders to use it and misuse it. In this world it is a great merit merely to be harmless.

Most of the illustrations in this issue are from Blake’s contributions to the extra-illustrated Shakespeare folio complied by the Rev. Joseph Thomas. The volume was sold by his descendants to Alexander Macmillan in 1880, from whose family it was acquired by the British Museum in 1880. The pictures are reproduced here by permission of the Trustees of the British Museum.

Subscriptions are $5 for 1 year, 4 issues. Special rate for individuals, $4 for 1 year, surface mail. For subscribers overseas who want to receive their issues by air mail, $8. U.S. currency or international money order if possible. Make checks payable to the Blake Newsletter. Address all subscription orders and related communications to Morris Eaves, Dept. of English, Univ. of New Mexico, Albuquerque 87131.

Design and layout for this issue: David Schnur and Sharon Stell, University of New Mexico.