The Catalogue of Blake’s Designs Completed, & A Last-Minute Inclusion

The typescript of the forthcoming catalogue of Blake’s works in the visual arts has now been handed in to the Trianon Press, who are to publish it for the William Blake Trust, though it has not yet gone to the printer. Its scope is defined as the paintings, drawings and separate hand-colored designs of William Blake. Monochrome engravings and the illuminated books are not included, though the Small and Large Books of Designs from the books are. It has been difficult to draw absolutely precise lines of demarcation. Separate colored copies of engravings and plates from the illuminated books have been included when it seems likely that Blake himself disposed of them as individual works in their own right, but colored proofs of pages begin page 49 | ↑ back to top still bearing lines of text, and hand-colored monochrome engravings issued in book form (e.g. the Job designs, the illustrations to Hayley’s Ballads and Triumph of Temper, and those to Young’s Night Thoughts) have been omitted. Proofs on which a considerable amount of work has been done in pencil or watercolor, such as three versions of the Europe title-page and the Job proofs with sketches for the designs in the margins, have been catalogued. Even within these somewhat arbitrary distinctions it is feared that some inconsistencies remain.

The catalogue numbers run to 886, plus eleven works attributed to Robert Blake and three to Catherine. This is not the full story, however, as sketchbooks and single projects like the watercolor illustrations to Young’s Night Thoughts are catalogued under a single number but are divided into sub-entries each with its own subsidiary number: 116, for instance, for Blake’s Notebook, and 537 for the Night Thoughts. In addition a number of individual drawings are drawn on both recto and verso. In all, therefore, over 2250 designs are catalogued. The arrangement is in roughly chronological groups, some fairly broadly defined, such as early drawings, some more unified, such as the Bible illustrations for Thomas Butts and the Dante illustrations for Linnell. Lost works recorded in such sources as William Rossetti’s lists in the 1863 and 1880 editions of Gilchrist’s Life of William Blake have been included in the hope that further examples may come to light; the tempera of “The Miracle of the Loaves and Fishes,” recently sold from the Kerrison Preston collection, is an example of a work known only from Rossetti’s 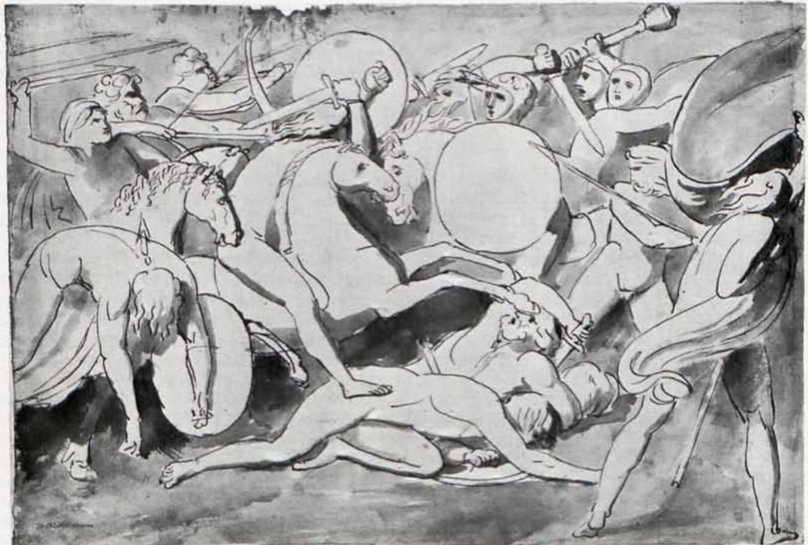 Hitherto unrecorded works also continue to appear, and no doubt will continue to do so after it is too late to include them in the catalogue. The latest (illus. 1) is a typical early pen and wash drawing of c. 1780 of a battle scene, acquired last year by Thos. Agnew & Sons Ltd., in an album of mixed 18th and 19th-century drawings mainly British. The weapons, particularly the mace, and the helmets of some of the warriors suggest the Middle Ages. Both sides include horsemen as well as foot-soldiers; there is a mounted trumpeter on the left and a standard-bearer on the right. It has not been possible to identify the battle. Perhaps indeed it is a general representation of “War,” the subject of a number of works between 1784, when Blake exhibited “War unchained by an Angel, Fire, Pestilence, and Famine following” at the Royal Academy[e] (see Blake Newsletter 25 [Summer 1973], pp. 4-8) and 1805, when Blake signed and dated the Boston Museum’s watercolor of “War,” a later version of “A Breach in the City, the Morning after the Battle,” another work exhibited in 1784; the new drawing is not, however, related in composition to any of these works. On the other hand it also has affinities with the series of illustrations to English history, most of which date from c. 1779 but of which Blake drew up a list of subjects in his Notebook as late as 1793.