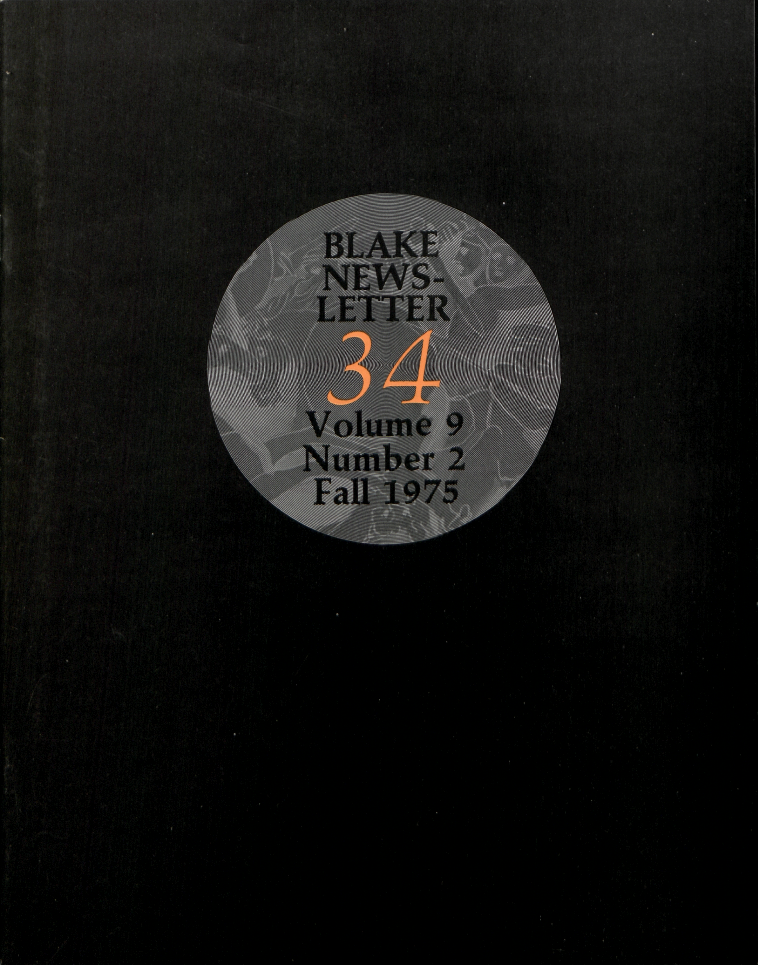 Martin Butlin is Keeper of the British Collection at the Tate Gallery, London. He writes frequently for the Newsletter.

David V. Erdman is Professor of English at the State University of New York, Stony Brook, and Director of Publications for the New York Public Library. He has finished editing the volumes of Coleridge’s journalism in the Bollingen series, and is busy preparing a new edition of Blake: Prophet Against Empire.

James C. Evans is Assistant Professor of English at the University of Texas at Austin. He has contributed articles on Blake and Shelley to other journals and recently completed his Ph.D. dissertation on Blake.

Michael Ferber is a graduate student in his final year at Harvard. He is writing a thesis on Blake’s political and social ideas.

L. Edwin Folsom is an Instructor of English at the University of Rochester. He is investigating the metaphorical meaning of America in twentieth-century poetry.

Sir Geoffrey Keynes, M.D., F.R.C.S., Consulting Surgeon (retired), is known by his years of work in textual criticism and bibliography to all students of Blake.

Francis Wood Metcalf is writing a doctoral dissertation at New York University on Blake’s poetic technique. He has contributed several articles and a review to the Newsletter.

Warren U. Ober is Chairman of the Department of English at the University of Waterloo, Waterloo, Ontario, Canada. He has coedited several textbooks and published articles on Coleridge, Wordsworth, and Southey. He is on the board of editorial advisors for Germano-Slavica.

Donald H. Reiman usually performs as a harmless drudge in the Shelley Factory at the Carl H. Pforzheimer Library. His previous publications range, however, from a review of the Creation to an analysis of the Apocalypse, and in an earlier incarnation he was best known for parodies that appeared in his college newspaper.

Edward J. Rose, Professor of English, University of Alberta, Edmonton, Canada, is one of the editors of the forthcoming edition of Blake’s designs for Young’s Night Thoughts. He has written a book on Henry George, and his publications on Blake, Melville, Emerson, Thoreau, Shelley, and others have appeared in numerous journals.

Eileen Sanzo, Albertus Magnus College, New Haven, Conn., has written a doctoral dissertation on “William Blake: Poet of the City in the Industrial Age,” published on Blake in Thought, and published poetry and reviews on other subjects.

G. P. Tyson, in the Department of English at the University of Maryland, is presently preparing a book-length study of Joseph Johnson and his circle.

David Wagenknecht, Department of English, Boston University, is author of Blake’s Night: William Blake and the Idea of Pastoral, published by Harvard in 1973.

Judith Wardle is a Lecturer in the Department of English, Monash University, Clayton, Victoria, Australia.

Paul M. Zall, Professor of English at California State University, Los Angeles, edited Wordsworth’s critical essays in the Regents Critics series, and contributes “The Cool World of Samuel Taylor Coleridge” column to The Wordsworth Circle. He is now editing Benjamin Franklin’s Autobiography from the unique manuscript at the Huntington Library.

Manuscripts are welcome. Send two copies, typed and documented according to the forms suggested in the MLA Style Sheet, to either of the editors: Morris Eaves, Dept. of English, Univ. of New Mexico, Albuquerque, N.M. 87131; Morton Paley, Dept. of English, Boston University, Boston, Mass. 02215.

Subscriptions are $5 for one year, one volume, four issues. Special rate for individuals, $4 for one year, surface mail. For subscribers overseas who want to receive their issues by air mail, $8, U.S. currency or international money order if possible. Make checks payable to the Blake Newsletter. Address all subscription orders and related communications to Debra Sackett, Dept. of English, Univ. of New Mexico, Albuquerque, N.M. 87131.

Design and layout for this issue: Corinne M. Henning and Virginia Masi.