A NEW BLAKE DRAWING IN THE BOSTON MUSEUM OF FINE ART

The pages of this journal have frequently recorded the reappearance of early Blake drawings and I am happy to add another one, this time in the Boston Museum of Fine Art.1↤ 1 I would like to thank the staff of the Print Room at the Boston Museum who so kindly showed me the drawing and Martin Butlin who confirmed the attribution and provided the information on the provenance. The drawing will appear in his forthcoming catalogue raisonné as no. 119A. It is a large double-sided sheet measuring 30.2 × 48.2 cm and the recto (illus. 1) contains a fine study of Goliath cursing David in pen over a pencil underdrawing.2↤ 2 Museum no. 14. 955. There can be no doubt that it is an early drawing, dating from the early 1780s, but it contains in all essentials the composition of the Butts watercolor of the same subject, dated by Butlin c. 1803-05 (illus. 3). Other early drawings are often crude foreshadowings of later motifs, and we begin to see from them why Blake could claim in the Descriptive Catalogue that “the productions of our youth and of our maturer age are equal in all essential points.”

The verso (illus. 2) is much less finished but contains a motif, otherwise unknown in Blake’s 1 W. Blake, Goliath cursing David (I Samuel, 17: 41-43).   Courtesy Museum of Fine Art, Boston, Gift of David Keppel, 1914.
[View this object in the William Blake Archive]
oeuvre, of a Pulchinello-like figure with a long nose fighting a child which appears to cling to its mother. The form on the left seems to be a kind of boat reflected in water, but the connection with the rest of the design is unclear. Again the style suggests an early date.

An inscription on the verso tells us that the drawing belonged to the well-known Blake collection of Henry Cunliffe from whose sale it was bought by Keppel and subsequently given to the Museum by David Keppel in 1914. According to Martin Butlin the drawing passed with others from Mrs. Blake to Frederick Tatham, and it was in lot 170 at his sale on 29 April 1862, where it was bought with five others for 14/-by Toovey for Henry Cunliffe.

One might ask why Blake’s early drawings have so often gone unrecognized even in major collections. We can now appreciate their seminal qualities and begin page 206 | ↑ back to top 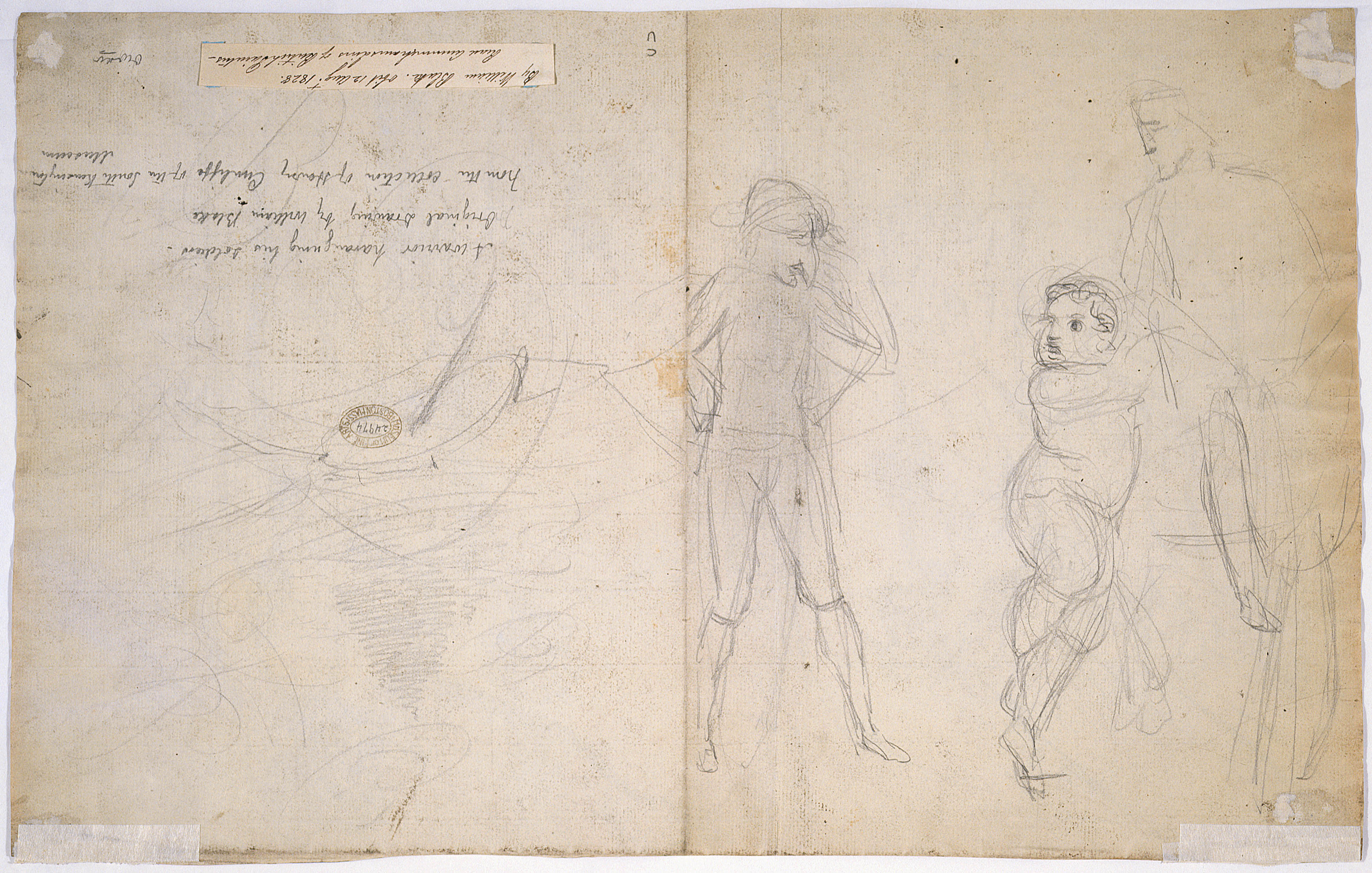 3 W. Blake, Goliath cursing David, watercolor.   Courtesy Museum of Fine Art, Boston.
[View this object in the William Blake Archive]
enjoy their individuality of handling, but it must be admitted that they are rather crude if compared to those of his contemporaries like Stothard and Flaxman. Although Blake was not an autodidact, the originality of the motifs tends to outstrip his mechanical abilities, which were evidently not finely honed by constant drawing from the model. As a result there are often embarrassing defects in Blake’s early drawings which have led connoisseurs to dismiss them as inferior examples by one of the many unidentified English Neoclassical artists of the late eighteenth century. No doubt they will continue to turn up in odd places, and we might well find among them more early prototypes for mature compositions.