The design on plate 14 of Jerusalem (illus. 1) consists of a winged Jerusalem descending from a rainbow through a starry sky to awaken Albion from his deathlike sleep of mortality beside watery shores where he is attended by 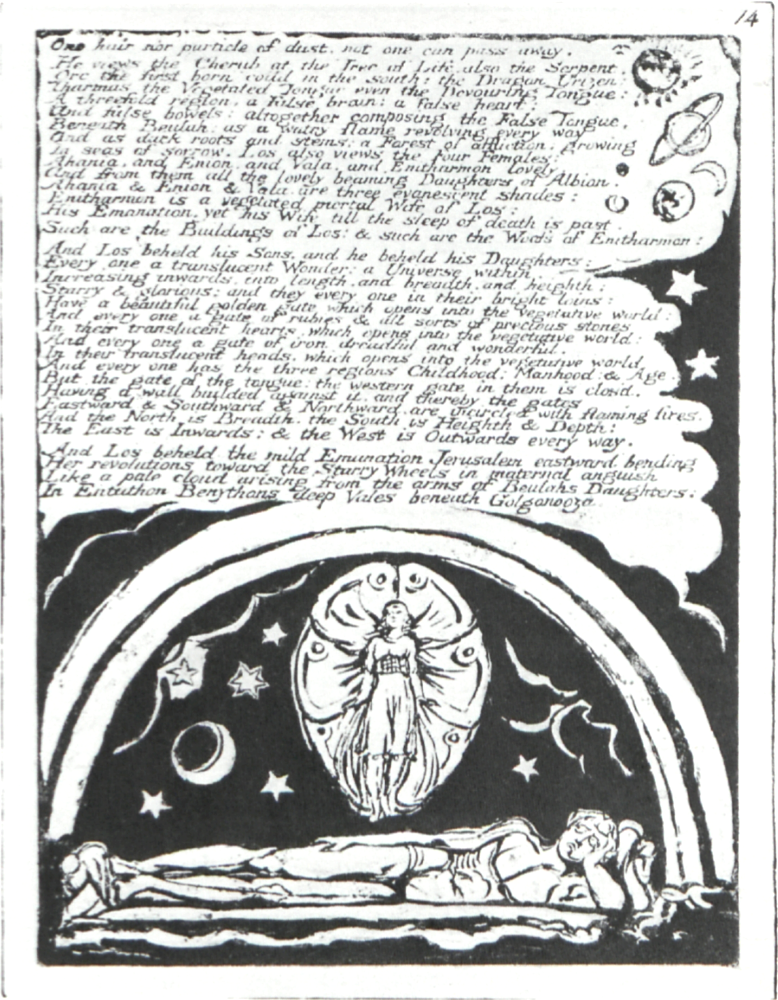 1. William Blake.   Jerusalem: 14. By permission of the Houghton Library, Harvard University.
two angels.1↤ 1 Some Blake scholars have identified the woman as Jerusalem: David V. Erdman, The Illuminated Blake (New York: Anchor Press/Doubleday, 1974), pp. 111, 293; Geoffrey Keynes, ed., Jerusalem (London: Trianon Press, 1974), pl. 14; Vivian de Sola Pinto, William Blake (New York: Schocken Books, 1965), p. 53; Jean H. Hagstrum, William Blake, Poet and Painter (Chicago: University of Chicago, 1964), p. 42; and Joseph Wicksteed, William Blake’s Jerusalem (London: Trianon Press, 1954), pp. 139-40, identifies her as “Jerusalem-Enitharmon/Fairy.” Those who identify her as someone else include S. Foster Damon, William Blake, His Philosophy and Symbols (Boston: Houghton Mifflin, 1924), p. 469, as Enitharmon; Edwin John Ellis and William Butler Yeats, The Work of William Blake: Poetic, Symbolic & Critical (London: Bernard Quaritch, 1893), vol. I, pp. 313-14, identify her as Leutha, daughter of Beulah “that follows sleepers in their dreams.” All further references to these authors are taken from the sources listed above unless otherwise indicated. The male figure is identified either as Albion (Wicksteed, de Sola Pinto, Erdman) or Los (Hagstrum, Damon, Keynes). Keynes identifies the last four lines on plate 14 as the passage from Jerusalem interpreted in Blake’s design. Although this design has been variously identified, the specific iconographic sources have not yet come to light. Attention paid to the particulars of the scene clearly shows that the illumination on plate 14 is, among other things, a parallel visual interpretation of the Greek myth of Iris and Morpheus.2↤ 2 Martin Butlin, in The Paintings and Drawings of William Blake (New Haven: Yale University Press, 1981) illus. 795, identifies a sketch on a sheet from Hayley’s ballads (1802) as “Enitharmon shown as Iris with peacock wings, at the floor of plate 14”; Erdman offers an interpretation that is the most agreeable with the Iris myth, “a vision of the soul as the portion of man that wakes him from sleeping as body” (p. 111); Wicksteed and Ellis and Yeats state that the figure appears as if in a dream; de Sola Pinto calls her “Divine Womanhood” watching over his sleep; Damon interprets the design as inspiration visiting the poet in his sleep, but this is more likely an interpretation for Jerusalem 37 and 64.

Iris was the Greek goddess who personified the rainbow on which she descended to earth as a messenger of the gods.3↤ 3 Hall, James, Dictionary of Subjects and Symbols in Art (New York: Harper & Row, 1979), p. 162. Juno sent Iris to release the soul of Dido by rousing the sleeping Morpheus, the god of dreams.4↤ 4 Hall, p. 284. Morpheus was the brother of Thanatos (Death) and son of Hypnos (Sleep) and Nyx (Night). Nyx is usually represented with black wings outspread and holding an infant on each arm, one white (Sleep) and one dark (Death)—a possible thematic source for Jerusalem 4 and 33. The Kingdom of Hypnos was described by Ovid (Metamorphoses 11:589-632) as a cave in a hollow mountainside below which ran the River Lethe and next to which Blake shows Albion asleep. Lethe is the River of Forgetfulness, one of the five rivers surrounding Hades—an appropriate resting place for the god of dreams (and for Albion at this stage of Jerusalem).5↤ 5 Several scholars have commented on the watery shore in plate 14: Wicksteed calls it “a promontory surrounded by gentle water”; Keynes notes the “water’s edge”; and Erdman names it a “foaming ocean.” Iris is most often represented with her rainbow, as in this emblem from Boudard’s Iconologie of 1766 (illus. 2), or descending on bright wings from a rainbow to rouse the sleeping god.6↤ 6 Hall, p. 284. Blake’s engraving of a Cumberland design of Cupid and Psyche (in Irene Chayes, “The Presence of Cupid and Psyche,” Blake’s Visionary Forms Dramatic, ed. Erdman and Grant (Princeton: Princeton University Press, 1970), illus. 14, 118) shows two butterflies resting on a hill that looks like a rainbow. Could this further connect Iris with the butterfly wings that Blake has given her? Perhaps the lines around Albion’s shoulder in plate 14 are meant to indicate wings at rest.7↤ 7 Another interpretation could be that Albion is shown as a body, without its soul, carried down to the banks of Lethe by Sleep and Death. 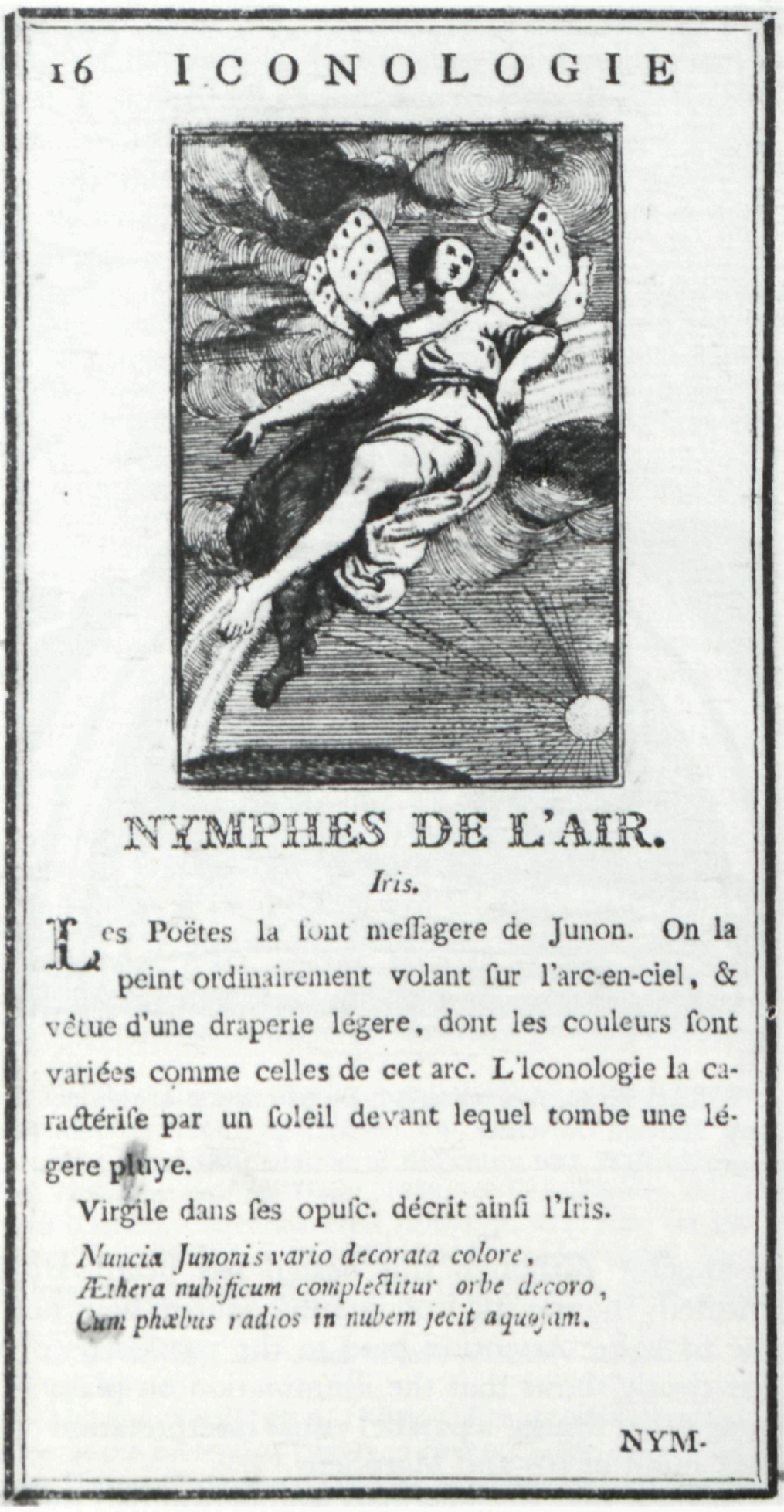 Although the various elements in plate 14 (rainbow, butterfly / woman, sleeping figure, water) clearly point to the myth of Iris and Morpheus, this parallel with the Greek theme alone does not account for the entire composition. The visual motif of reclining-male/hovering-female appears in several representations of physical-death/spiritual-rebirth throughout art. Ancient Egyptian funerary inscriptions (illus. 3) depict the Pharoah in his tomb attended by a hovering, female-headed, Ba bird—the soul separated from the physical body.8↤ 8 A. S. Roe, “The Thunder of Egypt,” William Blake: Essays for S. Foster Damon, ed. A.H. Rosenfeld (Providence: Brown University Press, 1969), p. 170. Bryant’s Mythology (1774) contains a section entitled “Of Egypt and Its Inhabitants . . . ” that was probably Blake’s early source for Egyptian symbols. The soul as female, hovering over the body as male, is a visual motif used repeatedly by Blake.

With his broad knowledge of art themes, Blake frequently drew from one artistic tradition while illustrating 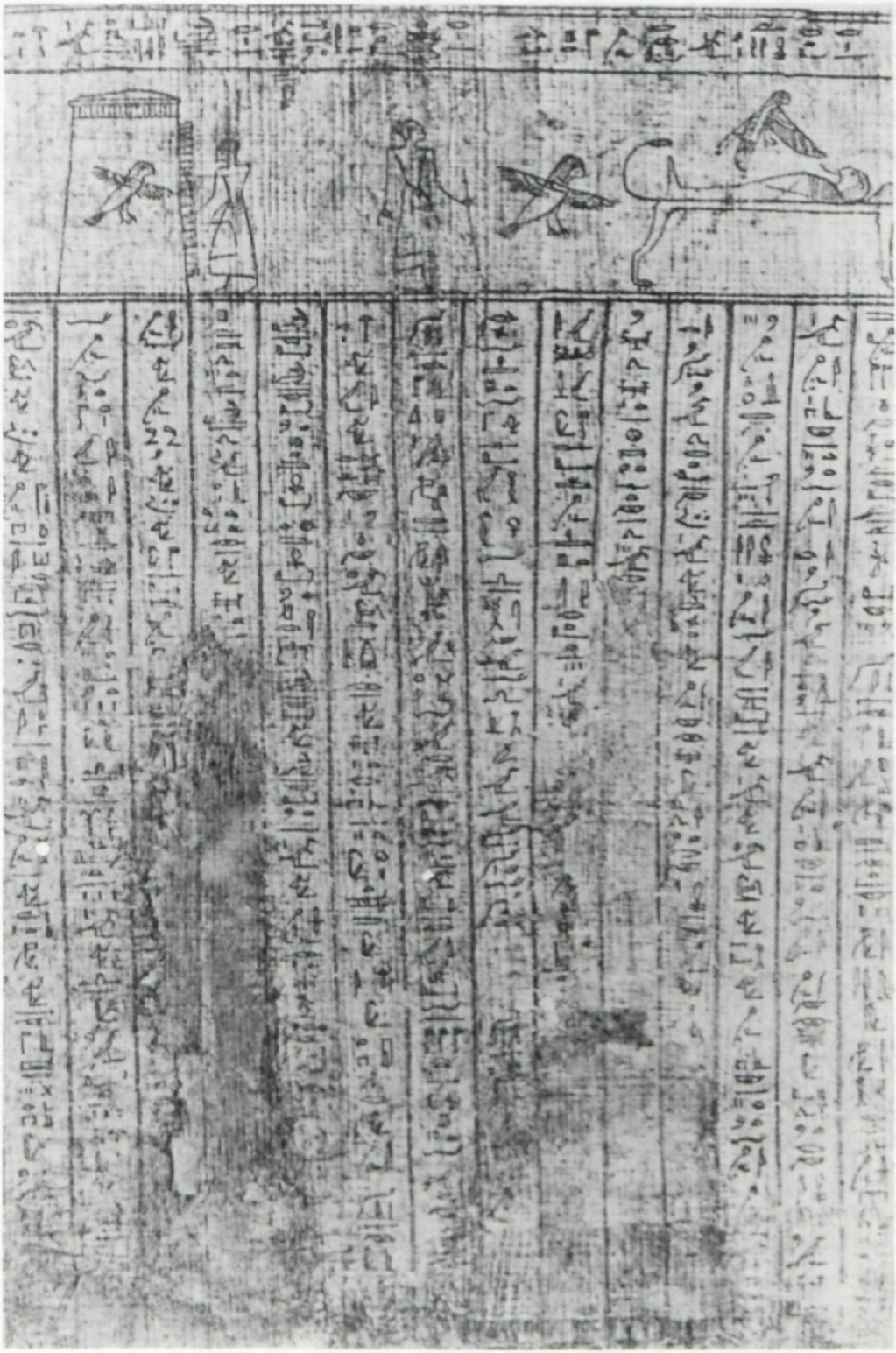 3. Portion of a funerary inscription, Egyptian papyrus.   John G. White Rare Book Collection, the Cleveland Public Library.
events from another.9↤ 9 Many scholars have commented upon this quality in Blake’s art: W.J.T. Mitchell, Blake’s Composite Art (Princeton: Princeton University Press, 1977), p. 10, where he asserts the “multiple metaphorical complexities”; Bo Lindberg, William Blake’s Illustrations to the Book of Job (Åbo[e]: Åbo[e] Akademi, 1973) p. 114, states that what Blake was really using in his images was a “common language of art”; and Wicksteed pronounces Blake’s borrowings a “pictorial language.” An example of this flexibility is seen in the motif of the swirling arch of angels in the preliminary drawing for plate 14 (illus. 4) which Blake also used in his The Death of The Virgin (illus. 5). The two compositions are remarkably similar and enlightening when one considers the changes enacted: the substitution of mythological figures for Christian ones; the turning of the angels away from their charge; and the reversal of female / male positions. If there is a visual connection between plate 14 in Jerusalem and Gothic tomb sculpture, the derivation of Blake’s composition for The Death of The Virgin is too obvious to be overlooked.10↤ 10 Erdman, p. 293, describes Albion as “miserable in his tomb” and “as stone cold as an effigy on a gothic tomb” (p. 293). It is well known that Blake sketched tomb monuments in Westminster Abbey as a young apprentice engraver. He was also linked to current funerary symbolism through a close friendship with John Flaxman, who conducted a substantial and successful trade in designs for tomb monuments.

In Gothic tomb sculpture, the Medieval gisant, usually shown reclining on his back, is sometimes depicted begin page 151 | ↑ back to top 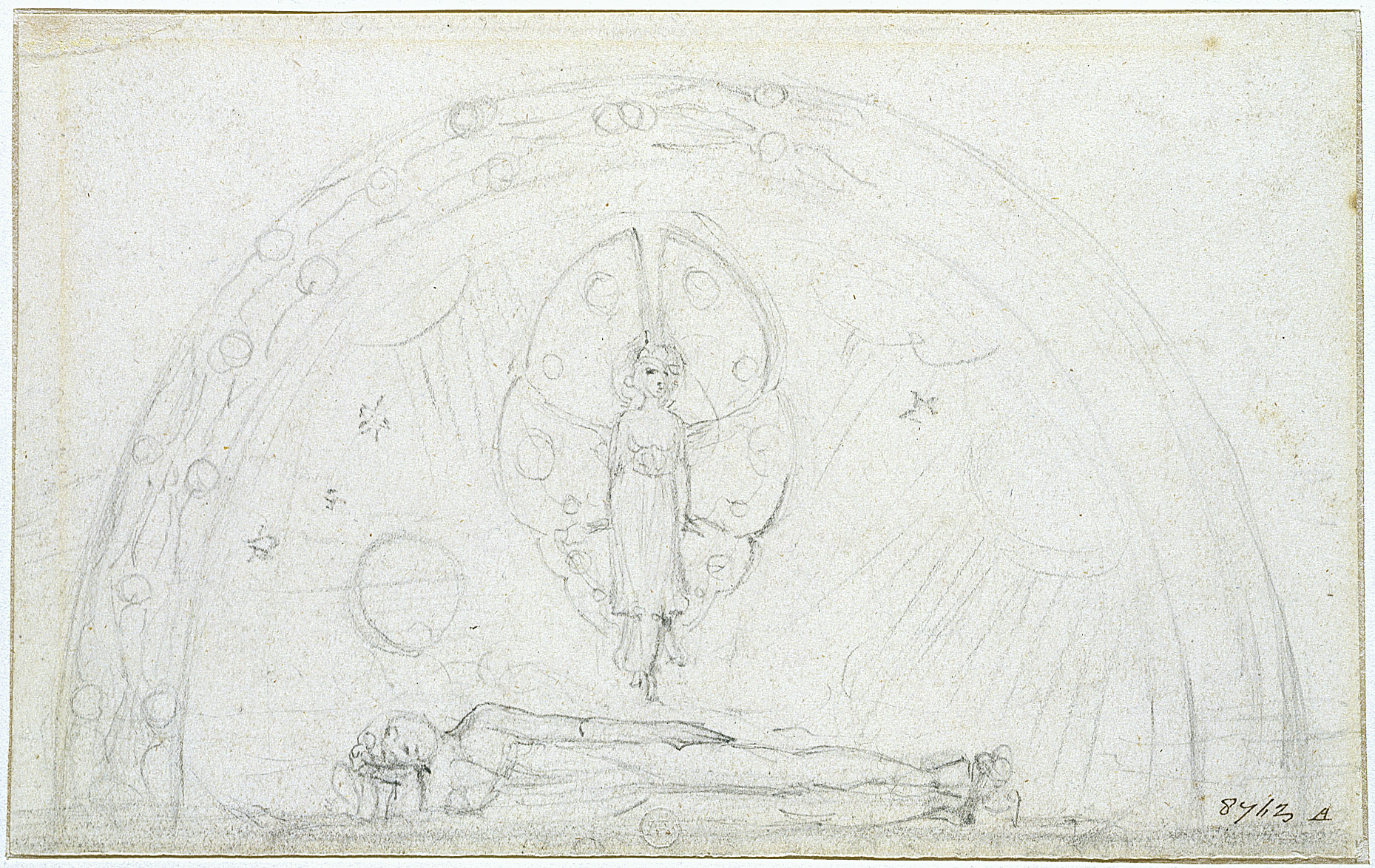 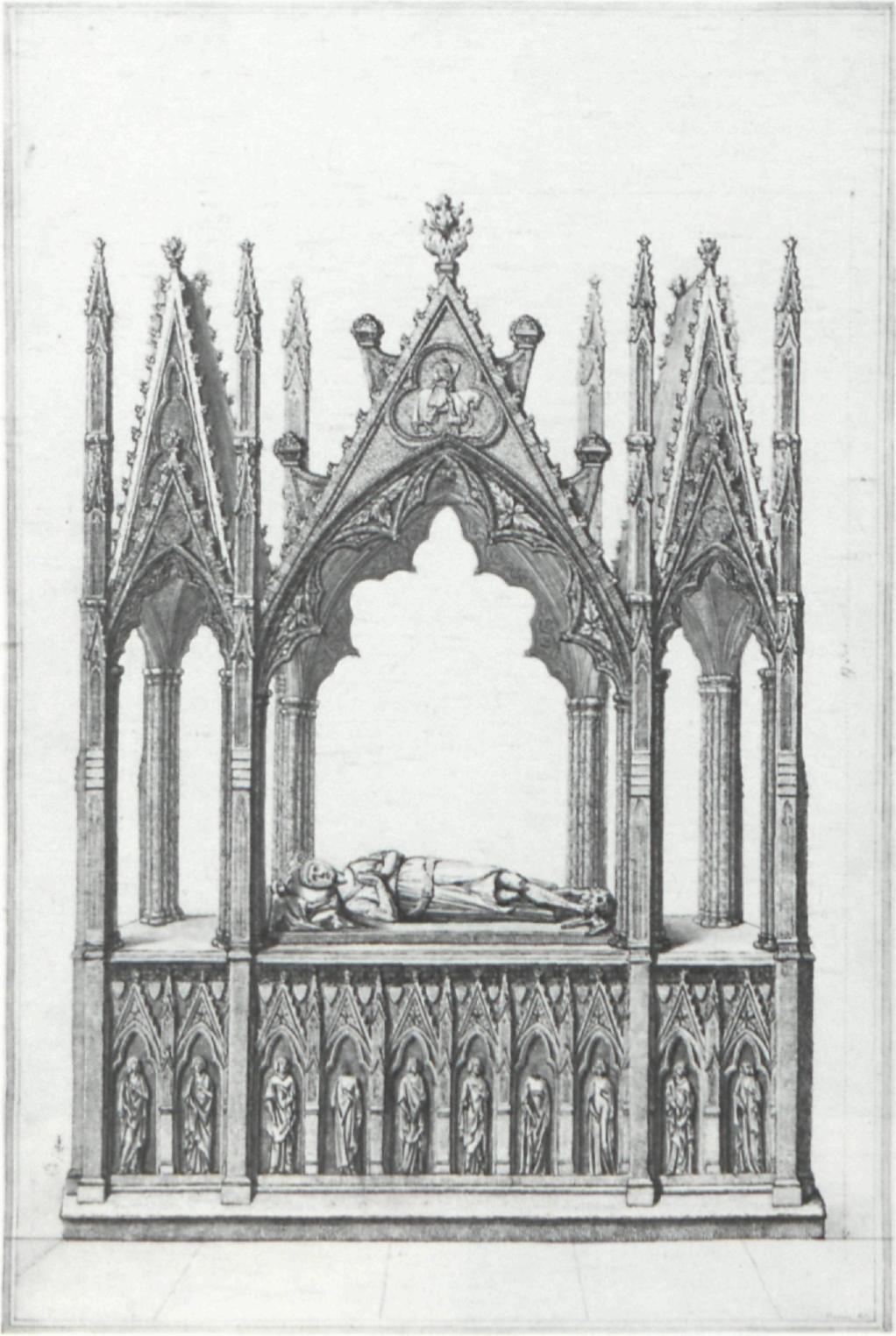 6. Edmund Earl of Lancaster, Side View of His Tomb (c. 1774-1779), Bodleian Library, Oxford.
lying on his side, as in plate 14. This is the position of Edmund Earl of Lancaster (illus. 6) in an engraving from Basire’s Sepulchral Monuments believed to have been executed by the apprentice Blake. As in this engraving, the deceased is frequently attended by miniscule angels who often support his head and feet (illus. 7), or, occasionally, kneel in perpetual prayer.11↤ 11 Seemingly unique to Blake (I have found it nowhere else) are the angels turned away from the deceased. Their unusual position certainly lends gravity to Albion’s condition. In Buddhist iconography, Albion’s pose is called the “lion-posture,” a pose assumed by Buddha when he was about to pass from the world of rebirths or into the state of Parinirvana. Although this symbolic posture contains none of the other elements of Blake’s design, its similarity to the actual pose of Albion is intriguing. Joseph Campbell, The Mythic Image (Princeton: Princeton University Press, 1974), p. 355. Keynes and Wicksteed refer to the angels as “guarding” the figure. Ellis and Yeats state that the human form “lying upon its side . . . is then in . . . [a] region of instinctive or vegetative feeling.” In the Tomb of Frederigo di Lavellongo (illus. 8), the reclining knight is visited by a vision of the Blessed Virgin, intercessor for Christian souls, a role not unlike Iris’. Her double halo resembles both the butterfly wings of the Greek messenger and of the Egyptian Ba.12↤ 12 The arch in the Frederigo tomb is an Islamic/Gothic one and contains grape leaves symbolizing Christ’s role as the Vine of the Church. It could just as well be a rounded arch and contain cherubs, as in The Death of The Virgin. Erdman and Hagstrum both note the “mandorla” wings of Jerusalem. Beneath her is the waning moon and a picture of Frederigo himself, upon presentation by his patron saints. The arch above the Virgin’s head serves the same compositionally enclosing function as Blake’s rainbow.

Finally, the celestial bodies in plate 14 are worth noting.13↤ 13 Erdman identifies the planets on the upper right of plate 14 as Saturn, Venus, Mercury, Earth and the Moon. He presents an interesting theory: the six stars surrounding Jerusalem identify her as the true sun or seventh star. Several scholars have commented upon the portion of the sky within the arch of the rainbow: Erdman “Universe within” Albion (p. 293); Damon the State of Beulah; and Ellis and Yeats, Mundane Shell. The placement of the waxing moon is similar in the preliminary drawing, the finished plate design and 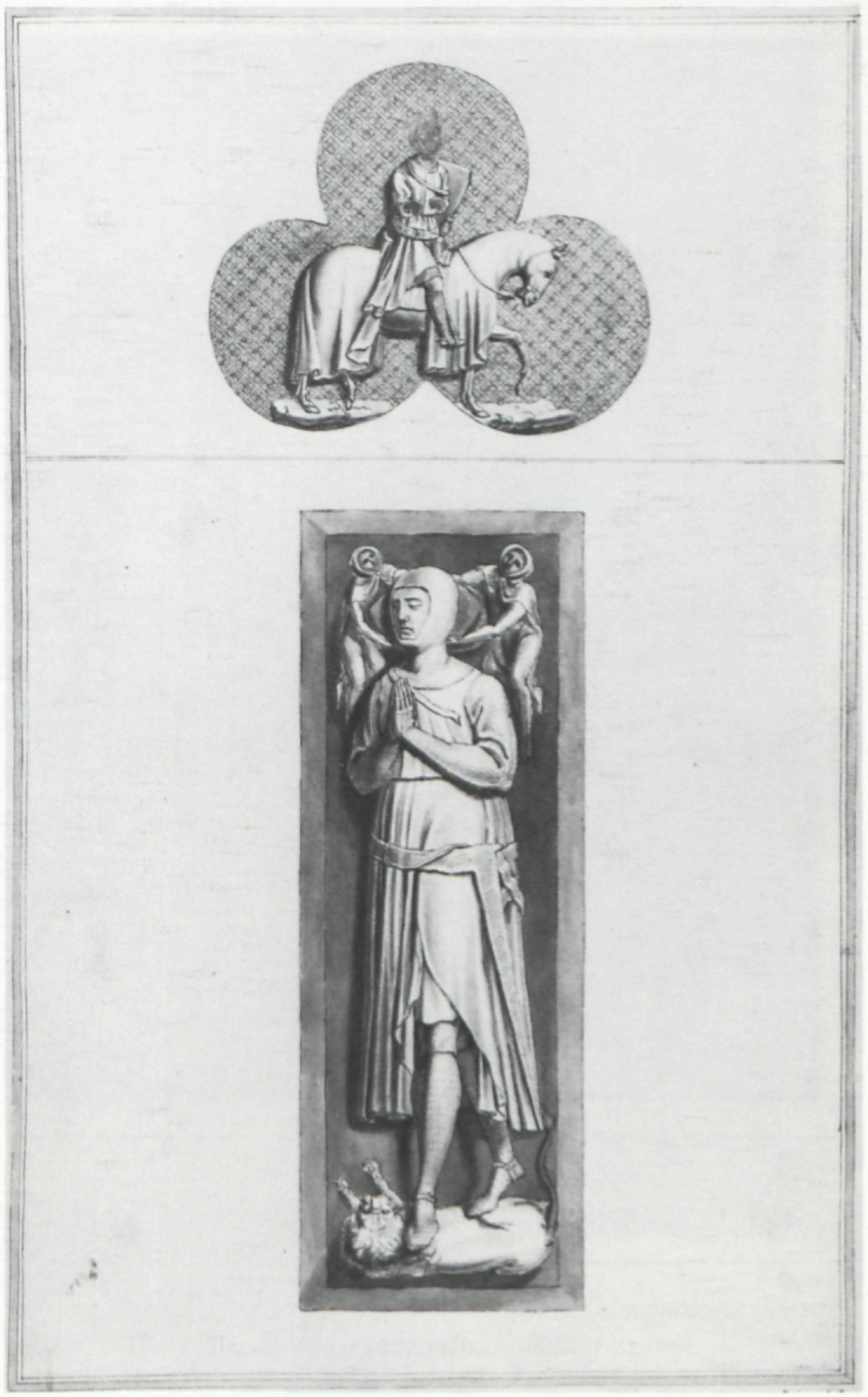 7. Edmund Earl of Lancaster, his Effigy seen from above . . . (c. 1774-1779), Bodleian Library, Oxford.
the Frederigo tomb painting, but the optimism of Blake’s waxing moon is more in keeping with the artist’s intent for Jerusalem. The sun, sending out such bright rays in the preliminary drawing, is here hidden by clouds (or cave mouth?). This may be further indication of the location of Iris’ descent—a land of perpetual twilight beneath the earth. In these surroundings, the rainbow could not be a natural phenomenon but a hopeful attribute of the promised salvation Iris/Jerusalem brings.14↤ 14 The rainbow in emblem literature (i.e., Emblem XXXII, Wither’s A Collection of Emblemes, Ancient & Moderne, 1635) follows the Old Testament precedent as a good omen, covenant or reward for suffering. John Gage in “Blake’s Newton,” “Warburg & Courtald Institute Journal,” 34 (November 1971), 376, argues that the rainbow in Blake’s work represents materialism (coming from water, not light) because it used the Newtonian order of colors, thus representing a negative or pessimistic element. This does not seem an accurate reading for Jerusalem. Surely the rainbow is an omen of Albion’s awakening, for, as Wicksteed pointed out, even Albion’s eyes seem to watch her descent behind heavy lids.15↤ 15 Wicksteed, p. 140. “The eyes seem to be watching the Vision as though to show it as a dream . . . .” This detail in plate 14 varies among the copies of Jerusalem.

The artistic sources for plate 14 of Jerusalem demonstrate the diversity, richness and amazing clarity with which Blake chose his visual parallels.16↤ 16 As Mitchell says (p. 6) “the essential point is to note the wealth of implication which Blake can deposit in a design that has no ‘illustrative’ function . . . an independent symbolic statement.” In plate 14, he tied Jerusalem and Albion to compatible and expansive sources: the Egyptian Ba-Soul hovering over the material body; the Blessed Virgin in her role as intercessor for Christian souls; and, most obviously, the rainbow messenger, begin page 153 | ↑ back to top 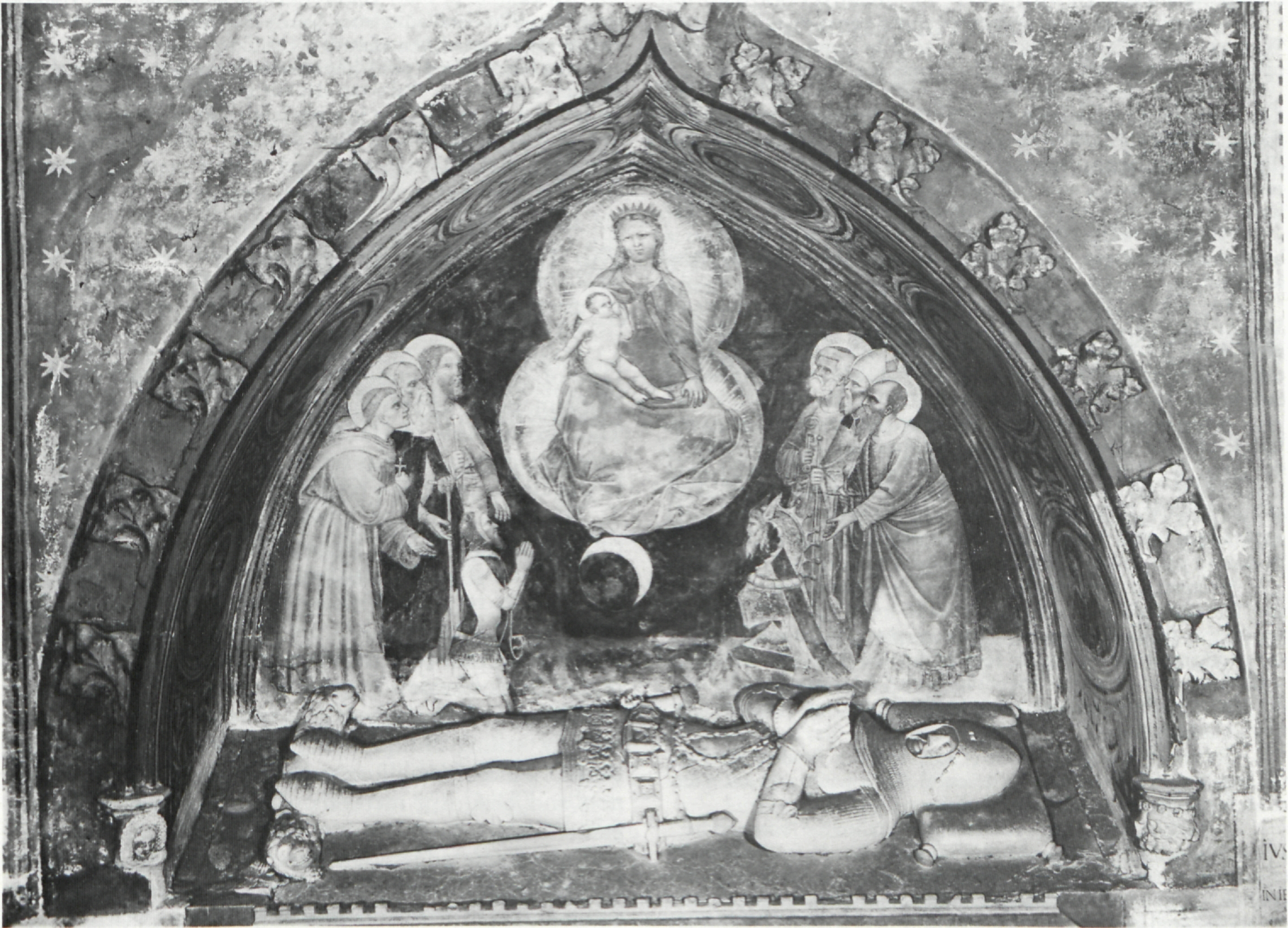 8. Tomb of Frederigo di Lavellongo (St. Antonio, Padua).   Alinari Art Resources.
Iris, in her descent to awaken Albion/Morpheus from his mortal dreams to spiritual life. The rays of the sun may be temporarily dimmed and the angels recoiled in momentary grief, but the design clearly heralds the positive outcome of Jerusalem.