Blake thanks John E. Grant for sending us this article. Photograph and text courtesy of the Athens News. 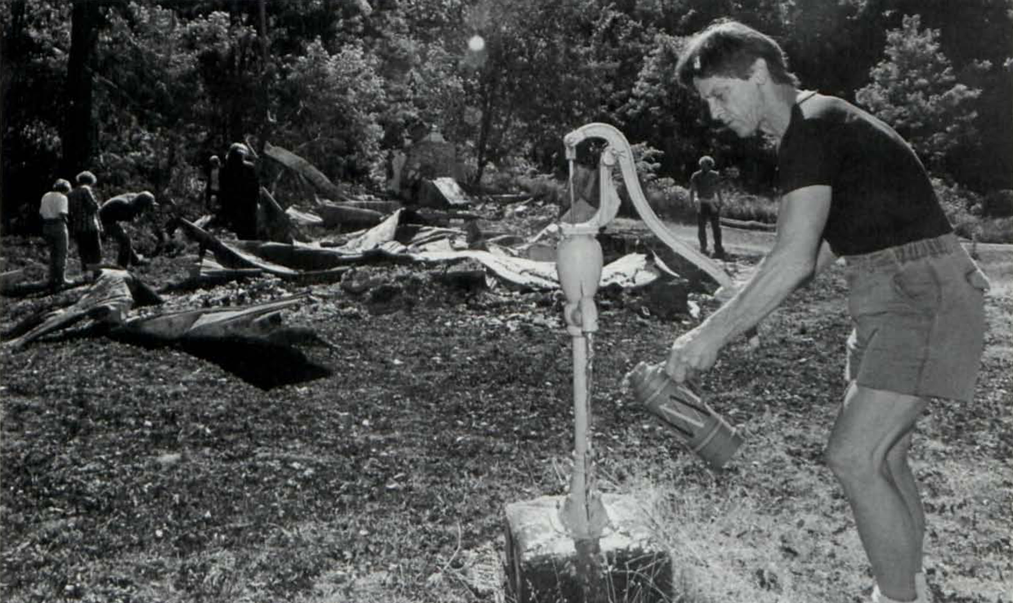 Aethelred Eldridge operates a water pump on Sunday morning as friends and students look at the remains of his fire-destroyed church near Millfield.

Ten people gathered yesterday outside the remains of the Church of William Blake, which was destroyed by arson last week, to hold their Sunday morning service.

“I feel the fire is an act of vandalism and was maliciously intended,” declared Aethelred Eldridge, founder of the church and an associate professor of art at Ohio University.

Asked about the fire, Jim Hanson, fire chief of the Chauncey-Dover Volunteer Fire Department, replied, “We had problems getting to the place, and the church was completely destroyed.”

The church, which is located off Ohio Rt. 550, has been a place of worship for more than 20 years for Eldridge and various friends, students and fellow travelers. The art professor charged yesterday that people with different philosophies have declared war on him and “defiled the place.

“The last three years, there has been an ugly war. They have been stealing art objects and utensils,” Eldridge said.

On Sunday, people involved with the church and residents in the area said they feared being targeted by the vandals and asked not to be quoted in The NEWS. 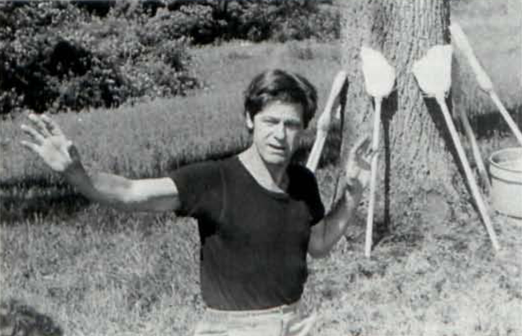 With the destruction of his church by arsonists, Eldridge preached to a dozen people outside Sunday morning   NEWS photos/SUSAN MITCHELL
rally” the same day the church was destroyed. And a member of the church said it was a “group from Glouster.”

At the beginning of the service, Eldridge handed out a piece of clean toilet paper and a black and white abstract illustration to all the people present. Although he said the toilet paper was to wipe off “all scuttlebutt,” he didn’t explain the abstract art.

The vandals also struck a “cemetery” outside the church where Eldridge and his congregation had stuck painted white broomsticks as a memorial to what Eldridge described as deceased followers of the church.

As Eldridge and friends gathered under a shade tree encircled by the brooms Sunday, the professor opened his sermon saying, “You don’t know teleology because you are not from a strange background.”

The unabridged Webster’s Third New International Dictionary describes teleology as a metaphysical doctrine explaining phenomena and events by final causes, or the use of design, purpose, or utility as an explanation of any natural phenomenon.

Without explaining exactly what teleology meant, the artist preached on, as his followers listened with rapt attention. “I’ll build a rope ladder from here to paradise...remission is when you lose your heart and never get it back,” he said. Then he elaborated on the beauty of circular reasoning, chaos, cosmos, bipolars and “salvation through I.”

Referring to those who burned the church, Eldridge continued, “We have met the enemy in the dust...you have only dust there...it was lunatic on their part...Ashes to Ashes...It was God ridden.”

One church member explained. “He is only an eccentric artist, but the local people think it is a Satanic church. Actually he is a real Christian, who started the church after William Blake.”

Doug Onley, who has known members of the congregation of the Church of William Blake, asked, “Superstition or fear, why should someone burn a place down?”