Many composers have attempted to fill the wistful quiet left for lovers of William Blake’s poems by the anecdotes of his having sung some of them to tunes of his own devising at public gatherings. With no hope, apparently, of recovering Blake’s tunes, we must be satisfied with the efforts of admirers. One of the best known is Parry’s anthem based on the preface to Milton, and Ralph Vaughan Williams and Benjamin Britten, among others, have offered their versions of the lyrics, including some texts from Songs of Innocence and of Experience. More recently, Greg Brown has recorded his pleasant country/folk setting of the Songs and before him, that indispensable citizen of the world, Allen Ginsberg, tuned the Songs in many public appearances and for several recordings, evolving a style of performance that fits nicely with what is called world music.

Now comes the artistically ambitious and powerful recording by a Norwegian rock composer, Finn Coren, The Blake Project. Presented in two parts of 10 songs each, “Spring” and “Silent Melancholy,” with a separate “Appendix,” this work can only be described as a song cycle, a term which might daunt by its implicit comparison with Schubert’s Winterreise, Schumann’s Liederkreis, or Mahler’s Kindertötenlieder. In each case, the composer has chosen to set a series of poems by a master and has grouped the musical results to provide both meaningful interplay among the songs and an overall sense of unity. The same intention and effect are apparent in The Blake Project. Coren has been working on this cycle for nearly 10 years, producing settings of 22 of the Songs of Innocence and of Experience (including two versions each of “The Tyger” and “The Fly,” along with two lyrics from Poetical Sketches, three from the Notebook, and “Jerusalem,” the preface to Milton.

Coren uses a variety of styles and instrumentations for the different songs; “The Sick Rose,” for example, is a quiet 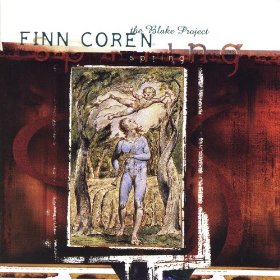 lament accompanied by acoustic guitar, while “London,” set with electric piano, two violins and a cello, with Coren’s vocal (as in some other songs as well) as a kind of sprechstimme, with a crooning repetition of the name “London” interpolated between verses. “To Tirzah” introduces a trumpet to particularly dramatic effect, while more exotic instruments (tablas, cembalo, Hardanger-fiddle, baglabouzouki) are featured along with the familiar electric guitars, bass, and percussion of more conventional rock groups. The musical styles range from the quiet, meditative sounds of “The Sick Rose,” “The Voice of the Ancient Bard” or “Little Boy Lost” to hard percussion-driven rock (as in the angry sounds of “The Chimney Sweeper” or “Holy Thursday” from Experience) to a John Lennon-like lyricism (as in “Spring,” “Cradle Song,” or “Holy Thursday” from Innocence) to songs that might be compared with the best of Lou Reed or Elvis Costello. “Jerusalem” has the feel of an operatic chorale, though firmly grounded in rock idiom.

There is also variety in the production of the music—a few songs are recorded in relatively straightforward manner, while many are given a surreal or angry or even threatening quality by overdubbing, reverberation, echo, and startling sound effects. Coren is especially good at musically punctuating or emphasizing words or phrases with instrumental notes or riffs that function rather like the tendrils, flowers, vine leaves, insects and other intruders into Blake’s verbal spaces. While the influences of the Beatles and others mentioned here are apparent, the music remains distinctively Coren’s. (Listening with stereo earphones provides a particularly intense experience of the sometimes elaborate sound production on these albums.)

A most impressive feature of Coren’s settings is his sense of the dialectical ironies and even wicked humor of many of the songs. “The Little Vagabond,” for example, is presented begin page 50 | ↑ back to top as a jaunty, swinging dance tune that builds to uproarious humor in the repetition of the third stanza at the end with its mockery of “modest Dame Lurch, who is always at Church.” This is followed, in the “Appendix,” with a soulful lullaby-like “Nurse’s Song” that is itself fiercely ironic. Just as Blake comments on possible reversals of poetic meaning or mood with his illuminations, so Coren uses contrasting musical styles to point up the indignation, anger or fear underlying the poems. “The Lamb” begins with an almost condescending spoken version of the first stanza, followed by an eerie orchestration with the quality of “space music” that emphasizes both the cosmic context of the poem and the peculiar combination of reassurance and menace that pervades it.

As has been indicated here, Coren does not simply settle on a surface characteristic or mood of a poem and try to reproduce it in his musical setting. His responses to Blake are as complex and interactive as those of any reader who hopes to experience the range of Blake’s meaning and as critical as Blake’s own responses when he set out to illustrate the works of other poets or to illuminate his own. Coren’s music can embody both the exuberance and the grimness, the joy and the pain of the world Blake creates and explores. In some cases, the multiple character is present in a single setting; in others, the presence of two settings of the same poem offers a glimpse of the complexity of Coren’s responses. This is particularly apparent in the two versions of “The Wild Flower’s Song” (“As I wanderd the forest/The green leaves among”) from the Notebook. The first version is bouncy, upbeat, cheerful, but with an ironic tinge made inevitable by the final lines (“To seek for new Joy/But I met with scorn”). This same poem is reset as a mournful dirge, accompanied by strings and cello, to end the “Appendix.” Neither version exhausts the poem, but they complement each other and indicate the sophistication of Coren’s understanding of Blake’s work.

The relationship of the “Appendix” to other two parts of the Project opens the question of its unity. The word “appendix” suggests that the songs included might be discards or extras that would not fit with the design of the rest, the album an afterthought or a monument to the wish not to waste any good material. I would prefer, however, to see the whole work as a triptych rather than a diptych, since “Appendix” seems as artfully arranged as the first two parts and, though it could not be said to offer a summation, it stands comfortably next to the other two parts, offering alternative versions of “The Tyger” (a more conventional rocking version) and “The Fly” (labeled a “Norwegian Folk Version,” scored for mandolin and Hardanger-fiddle) and the extraordinary blues-based version of “A Poison Tree.” The closing mournful version of “A Wild Flower’s Song” parallels the setting of “The Sick Rose” at the conclusion of “Silent Melancholy” (Coren’s overall title for the second part of “Spring”). By intermixing songs of experience with songs of innocence, Coren emphasizes the immanence of each state in the other, and his music reinforces the point 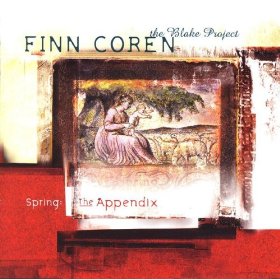 with its complex commentary. Coren’s version of Blake is dark; some might find it bleak. It provides the pleasures of powerful music and of the compulsion to think deeply, with the musicians, about Blake’s work.

Finn Coren has said that he took special pains not only with the music but with the design of his album, and the result is worth mentioning. The booklets that come with the CDs are beautifully designed, with reproductions of pages from Songs of Innocence and of Experience handsomely reprinted against appropriate backgrounds, and the “self-portrait” of Blake (possibly by Linnell) from Robert Essick’s collection providing an image of the poet consistent with the tone and mood of the album. (One glitch: Coren attributes to W.B. Yeats some lines from Blake’s notebook poem, “The Caverns of the Grave I’ve Seen”; apparently these lines were quoted in the introduction to a selection of Yeats’s poems; they are undeniably Yeatsian both thematically and tonally, so the confusion is not surprising.)

At the time of this writing, Coren’s albums are not distributed in the United States. (He also has an earlier album, A Full Moon in March, based on poems of Yeats.) They are available from a Swedish online company—www.boxman.com—and may be made available through a Canadian or U.S. distributor in the near future. Certainly the high artistic quality of these albums would richly reward any who chose to listen to them, even those not otherwise fond of rock music. While there are other rock albums that may properly be called song cycles (Lou Reed’s Songs for Drella and Magic and Loss, Elvis Costello’s The Juliet Letters, Sting’s Summoner’s Tales, and others), few have devoted themselves to exploring the possible interaction of music with the poetic complexity of a poet like Blake. It will be interesting to see what Coren produces in the future.