Blake went with his nineteen-year-old disciple Samuel Palmer to the Royal Academy exhibition of May 1824. Years later Palmer remembered vividly seeing ↤ 1. Blake was wearing his hat indoors; the watercolor by Richard Newton of an exhibition of c. 1794 shows men wearing and doffing their hats (p. 143 in the catalogue here); see the apparent self-portrait of Blake in a rather broad-rimmed hat in the Canterbury Pilgrims design (illus. 1). ↤ 2. Blake Records (Oxford: Clarendon Press, 1969) 280.

the image of Blake in his plain black suit and rather broad-rimmed, but not quakerish hat,1 standing so quietly among all the dressed-up, rustling, swelling people, and myself thinking “How little you know who is among you!”2

At the dinner at Tate Britain opening the exhibition in November 2000 and next day at the Tate reception, there were no broad-brimmed black hats—indeed, there were no hats at all. But if Blake had been there, or Gully Jimson either, what would he have made of it all?—the discrete sponsors leading off the quadrille, the cataracts of champagne, and room after deftly-lighted room exhibiting a plethora of his works such as the quiet artist-engraver had never seen assembled in one place. Indeed, some of these works had never been in the same room together, and a number of them begin page 65 | ↑ back to top 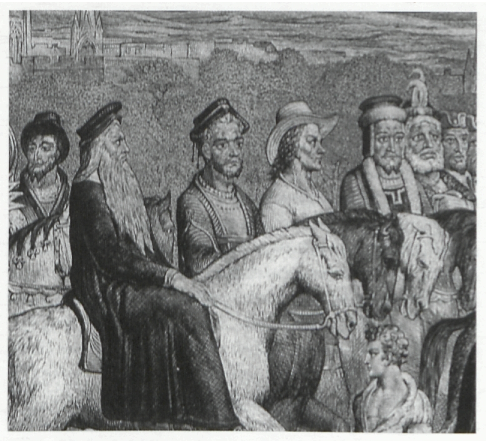 1. Detail of William Blake, “Chaucers Canterbury Pilgrims” (1810), reproduced by permission of Robert N. Essick.   “Blake” is fourth from the left.
had not been on the same continent together for a century or more.

Of course he would have been dazzled by the generosity of lenders throughout the English-speaking world—thirty-two in Britain (mostly the British Library [28], the British Museum Print Room [54], the Tate [37], and the Fitzwilliam Museum [25]); eleven in the United States, three in Canada, and one in Australia.

He might have been as curious as we to compare the coloring of early and late copies of, say, his Songs of Innocence, to see how the Great Color Prints have withstood the ravages of time (often brilliantly), and how the seasons have assailed his beloved temperas (sometimes lamentably).

But most of all he might have marveled at these bank directors and advertising executives and luminaries of fashion assembled to dine at the table of William Blake. Blake’s own private exhibition in 1809 in his brother’s hosiery shop may not have attracted more than three or four viewers at a time—indeed, we know of no occasion when there were as many as four there at once. William Blake as a culture or cult hero of the Establishment would have bemused or bewildered the man who wrote of the world of Pitt and Paine in 1798—and could have written of the world of Blair and Bush in 2001—“The Beast & the Whore rule without control.”3↤ 3. Marginalium (1798) to Watson’s Apology for the Bible (1797) (William Blake’s Writings [1978] 1404).

Have Blake’s arts reduced the power of the Whore and the Beast—or have his arts been perverted, so that the “Jerusalem” hymn becomes in 1917 a war song to Englishmen and the state itself fosters in 2000 the arts of the most eloquent anarchist in England?

Most of those who enjoy Blake’s works have to make do with not-as-good substitutes, from facsimiles to mere “reproductions” to (even though we know better) editions of his works in Illuminated Printing without pictures. The opportunity to see the real thing is rare, for the originals are scattered from Vienna (Austria) to the National Gallery of Victoria (Australia).

As a consequence, a Blake exhibition such as the enormous one at Tate Britain is a rare treat, though a treat which is becoming less rare. Since Martin Butlin organized the great Blake exhibition at the Tate in 1978, there have been important Blake exhibitions in Toronto and New Haven (1982-83), Tokyo (1990), Barcelona and Madrid (1996), and even Helsinki (2000). Perhaps if you just sit still a major Blake exhibition will come to your own hamlet. Or perhaps not.

The Tate Blake exhibition of 2000-2001 was certainly a major exhibition, mounted with enormous éclat and puffery. It included almost all Blake’s works in Illuminated Printing, sometimes in several copies and sometimes with each plate separately exhibited (as in Jerusalem [E]). They included All Religions Are One (A—the only known copy), America (C, F), Book of Los (A, unique), Book of Thel (A), Europe (B), First Book of Urizen (D), For Children: The Gates of Paradise (E), “Laocoön” (B), Marriage of Heaven and Hell (E, L-M), Jerusalem (A, E), Milton (L), Song of Los (B), Songs of Innocence (F), Songs of Innocence and Experience (B, E-F-G, T1), There is No Natural Religion (L), and Visions of the Daughters of Albion (a, D). Among Blake’s major manuscripts there were his Notebook, Vala or The Four Zoas, and Tiriel, but not the unillustrated Ballads Manuscript.

The drawings included those for Tiriel (all the nine known surviving watercolors), Young’s Night Thoughts (8), Gray’s Poems (5), Chaucer, Dante (29), Paradise Lost (11 of 12 from the Thomas set), L’Allegro and Il Penseroso, the Large Blake-Varley Sketchbook and the Large Book of Designs.4↤ 4. The exhibition and catalogue do not, however, include Poetical Sketches and Descriptive Catalogue (which are not illustrated) or the Bunyan designs, and they have only two of the scores of Visionary Heads.

It is wonderful to be able to see the real thing—but some of these works are not the real thing. Exhibits 111a-d are copperplates made and printed by Michael Phillips, and #103 is a rolling press with arms about 9’ high, much higher than the ceiling of the only surviving room in which Blake printed, in his cottage at Felpham.

The most rewarding of the exhibits were those which cannot be adequately reproduced, either because of their size or because of their medium. Most impressive among the originals of the watercolors are the “Vision of the Last Judgement,” 20” × 15½” (#59, Petworth House), “An Allegory of the Spiritual Condition of Man,” 59 5/8” × 47 ¾” (#60), and Chaucer’s Canterbury Pilgrims tempera, 18 3/8” × 53 15/16” (#62). But the most extraordinary effect is made by the complete series of twelve Large Colour Prints (#241-52) which have rarely been seen together—even Butts, his chief begin page 66 | ↑ back to top patron at the time, did not have a complete set. They are enormous, c. 18” × 24”, no method of reproducing their three-dimensional effects is at all satisfactory, and their cumulative effect is well-nigh overwhelming.

The exhibition was organized chiefly by Robin Hamlyn, and the catalogue is a worthy memorial of the exhibition. The pro forma essays by Peter Ackroyd5↤ 5. Ackroyd’s “William Blake: The Man” (pp. 11-13) is notable for his knighting of “Sir William Hayley” (p. 13), rectifying an omission by George III. and Marilyn Butler6↤ 6. Marilyn Butler, “Blake in his Time” (pp. 15-25) speaks of Blake’s “death at seventy” (p. 14: he was 69), “his first volume of poems (Songs of Innocence, 1789)” (p. 14: his “first volume of poems” was Poetical Sketches [1783]), “the busy printing house of the publisher Joseph Johnson” (p. 17: Joseph Johnson had no printing house; he farmed his books to numerous printers), and “Blake’s paganism” (p. 19). are remarkable for little more than good will.

The catalogue7↤ 7. William Blake (London: Tate, 2000) 4°, 304 pp., 286 plates, ISBN: 1854373145, £29.99; (New York: Harry N. Abrams, 2001) ISBN: 0810957108, $75.00, hardcover. The “Catalogue” (pp. 29-293) is by Christine Riding, David Blayney Brown, Elizabeth Barker, Ian Warrell, Lizzie Carey-Thomas, Martin Postle, Martin Myrone, Michael Phillips, Noa Cahaner McManus, and Robin Hamlyn. The Abrams version adds a “Checklist of Works Exhibited at the Metropolitan Museum of Art” (pp. 299-304), with far fewer works than in the Tate exhibition and some additions. is very generously illustrated, though the reproductions vary capriciously in size; for instance, the Tiriel designs are reproduced in three radically different sizes, though the originals are all approximately the same size. The reproductions include all those known for Tiriel (9), 29 for Dante, 8 for Milton (A), Marriage (L-M) entire, 9 from Europe (B), 16 from Jerusalem (E), and 22 from the Bible.

The catalogue is useful and responsible. However, Richard Edwards was scarcely “the leading London bookseller” (p. 52), though his brother James might be so described, and Boydell’s Shakspeare Gallery was not “abandoned” (p. 52).

The most original part of the catalogue is Michael Phillips, “The Furnace of Lambeth’s Vale” (pp. 98-171). He claims, as he does in his William Blake: The Creation of the Songs From Manuscript to Illuminated Printing (London: British Library, 2000), with many of the same reproductions, that the proprietary chapel built in 1793 in Lambeth was “built on the village green” (p. 145), as background for “The Garden of Love,” but he offers no evidence that it was indeed on the village green, as is the plain intent of “The Garden of Love” (1794), and there is no village green on the map of Lambeth which he reproduces (p. 145). In the anti-Paine riots in October 1793, “The fires would have been clearly seen from . . . Hercules Buildings” where Blake lived (p. 154), but no evidence is offered. “Clearly, any ambitions that Blake had to engage publicly in the debate provoked by the events in France had been suppressed” in the autumn of 1793 (p. 154), but Blake produced America (1793), Songs of Experience (1794), Europe (1794), and Song of Los (1795), in each of which an assiduous informer could easily have found generous evidence for his sympathies with revolutionary France. And Dr. Phillips insists (e.g., p. 107), as he does in William Blake (2000), that Blake’s color prints passed through the press twice, once with the basic design in monochrome and a second time with the colors.8↤ 8. The argument is based in significant part on evidence which does not exist; see Robert N. Essick and Joseph Viscomi, “An Inquiry into William Blake’s Method of Color Printing,” Blake/An Illustrated Quarterly 35 (winter 2002): 74-103, and www.blakequarterly.org. Most Blake scholars doubt his conclusion.

For those who could not see the exhibition at the Tate, a somewhat diminished version of it was exhibited at the Metropolitan Museum in New York on 27 March-24 June 2001.

Both exhibition and catalogues are achievements of extraordinary ambition and accomplishment. All who made it possible deserve our thanks.