On 17 September 1927, the leading Blake scholar Geoffrey Keynes wrote to Eric Maclagan, then director of the Victoria and Albert Museum:*↤ * Nicola Costaras of the V&A made the palette available for examination. Catherine Higgitt and Raymond White of the National Gallery Scientific Department gave valuable help in interpreting the GC results.A shorter version of this paper, entitled “William Blake’s Only Surviving Palette?” and with the same authors, was published in the V&A Conservation Journal 49 (spring 2005): 20-21. ↤ 1. V&A Archive, RP/1927/7280.

The American dealer, Gabriel Wells, recently bought the palette used by Blake during the brief period when he used oils. He put it in an exhibition at the Burlington F.A.C. where it attracted a good deal of attention (tho’ relics of this kind do not excite me much!) It seems to have a good pedigree.
Wells has now gone back to the U.S.A., and wishing to give the object to some public institution, has left it to my discretion.
The Vict. & Albert seemed to me to be the best place, tho’ Binyon suggests that the London Museum might also have a claim. Would you express an opinion? It can go to the Vict. & Albert if you wish.

Constable had presented Reynolds’ palette to the Royal Academy in 1830,2↤ 2. Royal Academy 04/1344. Constable bought the palette at Sir Thomas Lawrence’s sale. He had it from Sir George Beaumont, who had been given it by Reynolds. and the display of materials and physical relics of artists was not unknown in the 1920s. A few months earlier, the V&A had displayed the spectacles and etching needle of Samuel Palmer (1805-81) in its retrospective Blake exhibition.3↤ 3. A. H. Palmer, Catalogue of an Exhibition of Drawings, Etchings & Woodcuts by Samuel Palmer and Other Disciples of William Blake (London: V&A, 1926) 25-26. Both had been given to the V&A in 1923 (E. 3979, 3980-1923). Keynes referred to the 1927 exhibition at the Burlington Fine Arts Club commemorating the centenary of Blake’s death. Of modest scale but superlative quality, this was accompanied by a deluxe illustrated catalogue, and included a fragment of a copperplate for Blake’s America, and a plaster cast of the artist’s head4↤ 4. L. Binyon and A. G. B. Russell, Catalogue, Blake Centenary Exhibition (London: Burlington Fine Arts Club, 1927) 53, 63 respectively. formerly owned by the son of George Richmond (1809-96), a leading member of the Ancients, followers of William Blake who included Palmer.

The palette, not in the catalogue, was evidently a late addition to the 1927 exhibition. Its owner was a Blake dealer of some repute. Keynes was told5↤ 5. V&A Archive, RP/1927/7280: F. A. C. Bathurst to Geoffrey Keynes, 28 September 1927. that the palette had belonged to the dealer Francis Harvey, who handled numerous works by Blake during the 1860s, including some from the studio sale of Frederick Tatham (1805-78), another of the Ancients, who had inherited Blake’s studio contents from the artist’s widow.6↤ 6. A. Gilchrist, Life of William Blake, 2 vols. (London: Macmillan and Co., 1863) 1:367.

The palette (illus. 1-2) was received in a presentation case, today labeled “Palette used by William Blake in 1780. Given by Mr. Gabriel Wells.” There is paint on both sides and it is inscribed around the thumbhole on the “reverse” “William Blake/28/Broad Street/1780.” Blake submitted his entry to the Royal Academy in 1780 from that address,7↤ 7. A. Graves, The Royal Academy of Arts. A Complete Dictionary of Contributors and Their Work from Its Foundation in 1769 to 1904, 8 vols. (London: Henry Graves and Co./George Bell and Sons, 1905-06) 1:298. and moved shortly afterwards. Basil Long, then Keeper of Paintings at the V&A, concluded that “the authenticity of the relic appears reasonably likely,” and recommended its acceptance as a gift.8↤ 8. V&A Archive, RP/1927/7280: memorandum from Basil Long to Eric Maclagan, 1 October 1927.

We analyzed material from this palette towards the end of a research project on Blake’s temperas, watercolors and color prints,9↤ 9. J. H. Townsend, ed., William Blake The Painter at Work (London: Tate Publishing, 2003). to compare them with Blake’s painting materials. The analytical methods used, namely polarizing microscopy, energy-dispersive x-ray analysis, FTIR microscopy and gas chromatography, are described elsewhere.10↤ 10. J. H. Townsend, “Analytical Methods,” Townsend, ed., William Blake 45-51. There was no visual evidence to suggest that the palette had been reused after a long interval, or that the paint was inconsistent with an eighteenth-nineteenth-century date.

It resembles oil paint, and because of the inscribed address it has always been assumed to date from c. 1780, the brief period during Blake’s training when he used oil, a medium he strongly criticized and therefore avoided for the rest of his life. Analysis (table 1) confirmed that it includes linseed oil in many colors, poppy oil in some, and a mixture of these, or possibly walnut oil, in others. These oil types are typical of artists’ oil paint, both hand ground in the late eighteenth and earlier nineteenth centuries, and supplied in tubes begin page 101 | ↑ back to top 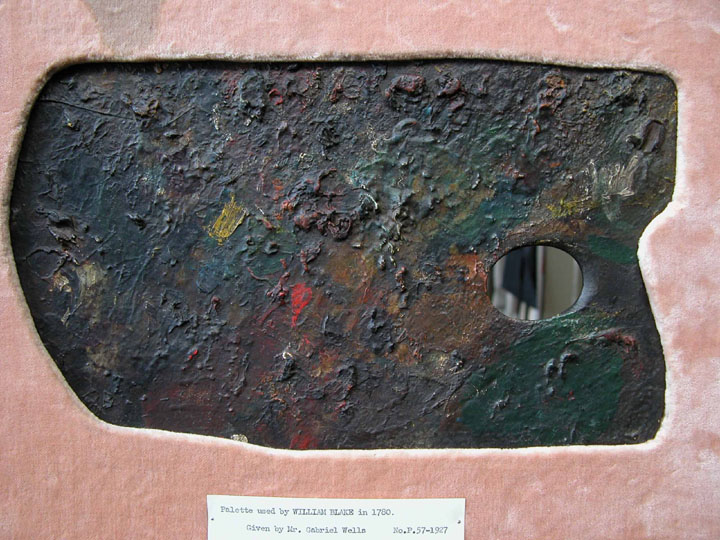 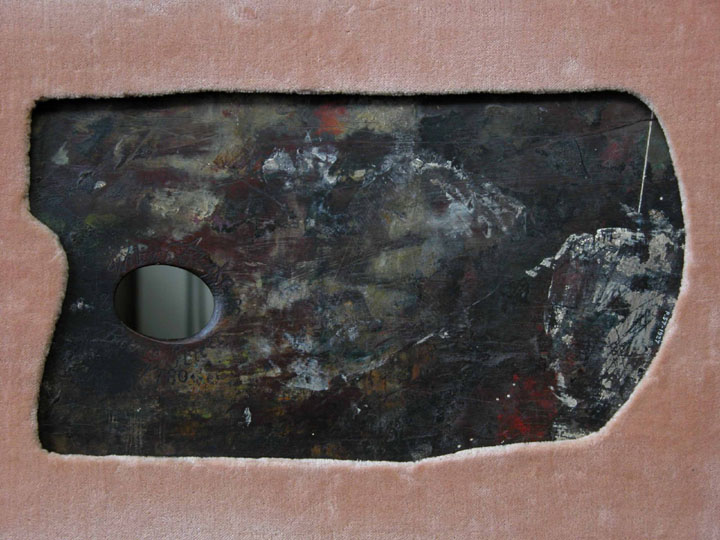 1-2. Front (top) and reverse (bottom) of the palette V&A P57-1927.   Victoria and Albert Museum, © V&A Images.[e]
begin page 102 | ↑ back to top Table 1: Analytical results for palette V&A P57-1927. begin page 103 | ↑ back to top later in the nineteenth century. In this palette the poppy oil, known to yellow less than linseed oil, was not strongly associated with the white and blue paint that would have benefited most from it. The variations in azelate/palmitate as well as oleate/stearate ratios seen in the gas chromatography results probably stem from differential drying of the paint, which was much thicker than would be found on a painting. The results may also have been affected by pigment-medium interactions such as the formation of zinc soaps, occasionally identified by FTIR, as well as the possible addition of non-drying oils.

At least one shade of yellow and one of orange lead chromate were identified with optical microscopy, and supported by EDX and FTIR results. These could not have been used by Blake or anyone else c. 1780. Yellow lead chromate (chrome yellow) was patented in 1814, and a pale yellow shade has been found in a Turner oil exhibited early that year, while the darker yellow and orange shades were probably available only later, in the 1820s.11↤ 11. J. H. Townsend, “The Materials of J M W Turner: Pigments,” Studies in Conservation 38 (1993): 231-54. These remain the earliest occurrences of lead chromate in the British collection at Tate, and in the literature on British art. Zinc white was produced in a useful form for oil medium in 1834, the earlier variety being too transparent for the purpose.12↤ 12. R. D. Harley, Artists’ Pigments c. 1600-1835. A Study of English Documentary Sources, 2nd ed. (London: Heinemann-Butterworth, 1982) 179. The traditional form of Prussian blue, found here, was used by J. M. W. Turner c. 1800-1840s.13↤ 13. Townsend, “Materials” 246. Constable (1776-1837), in contrast, was using the modern, fine-grained form by the end of his life,14↤ 14. S. Cove, “Constable’s Oil Painting Materials and Techniques,” Constable, ed. Leslie Parris and Ian Fleming-Williams (London: Tate Gallery, 1991) 493-518. as indeed was Turner (1775-1851).15↤ 15. Townsend, “Materials” 246. The Pre-Raphaelites used the modern form in the early 1850s.16↤ 16. J. H. Townsend, J. Ridge, and S. Hackney, eds., Pre-Raphaelite Painting Techniques 1848-1856 (London: Tate Publishing, 2004) Appendix 1. The other pigments found on the palette were available throughout Blake’s lifetime and well beyond. These observations suggest a date of use of c. 1834-45 for the palette.

The connection with Harvey implies that the palette was in existence by the 1860s, a period when Blake had a small following, and his work fetched correspondingly low prices. Nevertheless, the possibility cannot be excluded that it is a deliberate fraud, of mid-nineteenth-century date. If it has a genuine connection to Blake, it could have been used by one of the Ancients, who had acquired it from Blake’s widow, herself an artist. Our limited analyses of the paint used by Richmond and Palmer have shown that, like Blake himself, they used a mixture of animal glue and plant gums in their paintings during his last years, in the 1820s.17↤ 17. Townsend, ed., William Blake Appendix 6 (188). Few of their later works have been analyzed, but a Richmond self-portrait of 1853 is catalogued as in oil,18↤ 18. National Portrait Gallery, oil on canvas on board, 35.2 × 27.3 cm.; NPG 2509. so their use of this medium is possible. The only certain conclusion is that the paint on the palette could not have been used by William Blake.