William Blake in “The Vanguard of the Age”

In 1887 there appeared in The Architect: A Weekly Illustrated Journal of Art, Civil Engineering, and Building an illustrated series of articles entitled “The Vanguard of the Age.”1↤ 1. 37 (Jan.-June 1887): 9-10, 23-24, 35, 42-44. Written by Hugh Stannus and illustrated by reproductions of drawings by Herbert Johnson after paintings by Edward Armitage, R.A., these articles were a tribute to Henry Crabb Robinson on the subject of a monument to his memory. The monument comprised a series of paintings commissioned by Robinson’s friends and painted by Armitage in 1870-71 on the walls of University Hall, London. Robinson (1775-1867), a founder of the University of London, had also been a moving begin page 186 | ↑ back to top 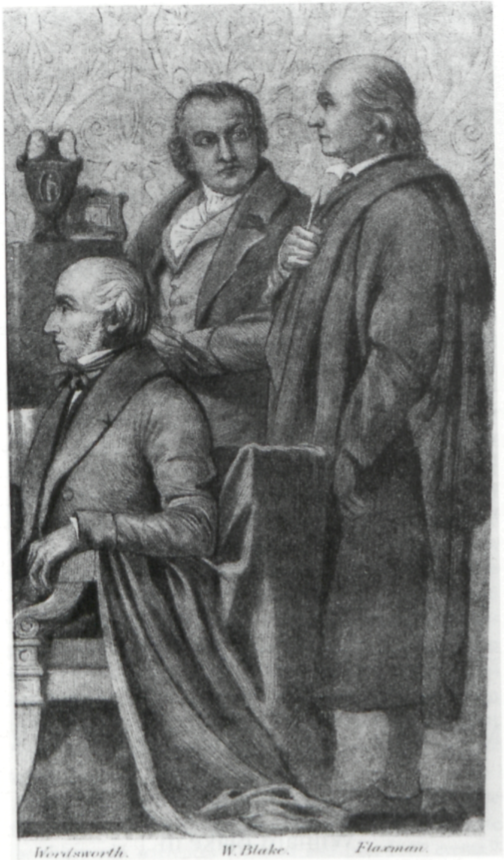 Detail from The Vanguard of the Age, ink-photo reproduction of a drawing by Herbert Johnson after a painting by Edward Armitage.   Reproduced by permission of the New York Public Library.
spirit behind University Hall, a University College dining hall founded in celebration of the Dissenters’ Chapels Act of 1844.2↤ 2. For information about University Hall I am grateful to David Bindman. (The building, in Gordon Square, is now occupied by Dr. Williams’s Library.) Armitage’s paintings deteriorated and were papered over, but the illustrations and verbal descriptions that compose “The Vanguard of the Age” now serve as a record of its original. One of its numerous interesting features3↤ 3. The image of Coleridge in “The Vanguard of the Age” is discussed in my Portraits of Coleridge (Oxford: Clarendon Press, 1999) 122-23. Some factual material is necessarily repeated here. is the place given to William Blake.

The large foldout illustration in which Blake appears follows page 22 in The Architect for 14 January 1887. In the lower right of the reproduction is printed “INK-PHOTO, SPRAGE & CO. 22 MARTINS LANE. CANNON ST, LONDON, E.C. ILLUSTRATIONS: THE VANGUARD OF THE AGE.” The ink-photo process, which was introduced by Sprage and Co., has been described as involving “collotypes, made initially on a surface of reticulated gelatine on a glass base.” A photo negative was printed on this surface, and, after a good many steps, a “lithographic printing surface” was made “from which the actual impressions were taken.”4↤ 4. See Geoffrey Wakeman, Victorian Book Illustration: The Technical Revolution (Detroit: Gale Research Co., 1973) 142-43. I thank Robert N. Essick for supplying this reference. Blake is represented in a manner deriving from the Thomas Phillips portrait of 1807 (National Portrait Gallery), which was well known through graphic reproductions.5↤ 5. Louis Schiavonetti’s engraving after Phillips had appeared as the frontispiece to the editions of Robert Blair’s The Grave published by R. H. Cromek in 1808 and by R. Ackermann in 1813, and the image had been re-engraved by A. L. Dick for editions published in New York in 1847 and 1858. Blake is shown as one of a group around Robinson, of which the others are Charles and Mary Lamb, Robert Southey, William Wordsworth, Samuel Taylor Coleridge, and John Flaxman.6↤ 6. The group occupies half of the foldout, design area 14 ¼ × 8 ⅞ in. Stannus writes:

Art is represented in the group by two men. William Blake may have seen more visions than any other seer since the days of Swedenborg. Robinson was his friend also, and often went to the room in Fountain Court where Blake and his wife lived in a simplicity that was ideal. Flaxman, the sculptor, will always be identified with University College, with which the Hall is associated, for there alone is it possible to form an idea of what he was as a sculptor.

The last sentence refers, of course, to University College’s great collection of full-sized plaster models of Flaxman’s sculptures, and although Stannus gets some facts about Blake slightly wrong—the Fountain Court apartment consisted of more than one room, and Robinson may have visited less frequently than “often”—the featuring of Blake in such proximity to Robinson in the original7↤ 7. In Armitage’s painting, Robinson was pictured as “an old man seated at a table,” an image based on a photograph of 1868 (National Portrait Gallery), according to Richard Walker, Regency Portraits (London: National Portrait Gallery, 1985) 1: 416-17. This image was not reproduced in The Architect. shows how closely they were associated in the minds of the latter’s friends. As “one who is very much delighted with being in good Company,”8↤ 8. Blake’s autograph, The Complete Poetry and Prose of William Blake, ed. David V. Erdman, newly rev. ed. (New York: Doubleday, 1988) 698. Blake appears very much at home among the Vanguard of the Age.