THE AMERICAN BLAKE FOUNDATION was founded on 7 July 1970 by Professor Roger Easson and his wife, Professor Kay Parkhurst Easson, to foster Blake scholarship. According to a statement by the Eassons, ↤ 1. Blake Studies 3.2 (spring 1971): 105.

This was an extraordinarily ambitious program. It was clearly influenced by the William Blake Trust, which had been established with a substantial sum from the Graham Robertson estate and was largely run by Sir Geoffrey Keynes; the trust produced remarkably fine exhibitions and facsimiles but did not attempt symposia, journals, or research grants. The ambition of the American Blake Foundation helps to explain the presence on its advisory board of Blake scholars as distinguished as Curran, Gleckner, Grant, Hagstrum, Wark, and Wittreich. It should also be said that Roger was extraordinarily energetic and persuasive.

Crucial details of the enterprise appear in an essay in the student newspaper at Illinois State University in Normal, Illinois, where the Eassons taught: ↤ 2. Edward Bury, “Mysticism Surrounds Blake Display,” Daily Vidette (c. September 1976); I have seen only a photocopy of it.

The Center for the Study of William Blake is a private, non-circulating library geared toward Blake scholarship and research. It was begun in 1972 and is operated by Roger and Kay Easson, ISU associate professors of English. . . . [The library includes] 95 per cent of all critical commentary on Blake in book form . . . [and] 1200 slides and graphic illustrations . . . . The most costly item was . . . “Night Thoughts,” which . . . cost the Eassons $2,500. . . . the Center . . . is actually owned by three entities: the American Blake Foundation; the editorial staff of “Blake Studies,” . . . and of course, the Eassons, who built half of the library from their own money, purchasing all of the expensive rare books. . . . the university and the English department do not contribute to the Center, except in providing office space and allowing the pari [pair] three hours release time to work on “Blake Studies.” . . . Currently, the Center is used mostly by the “Blake Studies” editorial staff ....2

Notice that the “three entities” which “actually owned” the center—“the American Blake Foundation; the editorial staff of ‘Blake Studies,’ . . . and of course, the Eassons”—are virtually indistinguishable. I take it that the “Center” was chiefly a room provided by the university for the work and library of the American Blake Foundation, i.e., the Eassons.

The foundation produced a symposium, a periodical (Blake Studies), facsimiles, and catalogues. The periodical and the books made significant contributions to Blake scholarship. The foundation’s first symposium—indeed, the only one of which I have a record—was held on 21 October 1971 at Illinois State University.

In 1976, when the Eassons were moving from Normal, Roger wrote to me that they had “a self-sustaining journal, a self-sustaining facsimile press, an extensive research collection (1,276 volumes at last count) endowed with a private fund amounting to approximately $5,000 annually.” In a letter of 23 January 2007 he said that “the library was actually never owned by the Foundation but belonged to us; it was placed on loan to the Foundation for research purposes. All the funds for book purchases came from our personal resources.”

When the Eassons moved to Memphis State University in 1977, Roger said in a letter to me that they preferred not to advertise their ownership of their plates from There is No Natural Religion (pls. a4, a6, b3) and the Songs (pl.23) because

I do not wish it generally known that we are buying heavily at auction. . . . The Center will be housed here in Patterson Hall, and will begin with a collection of over twelve hundred volumes, and will have an annual budget of a modest $10,000.00 per annum for book acquisition. 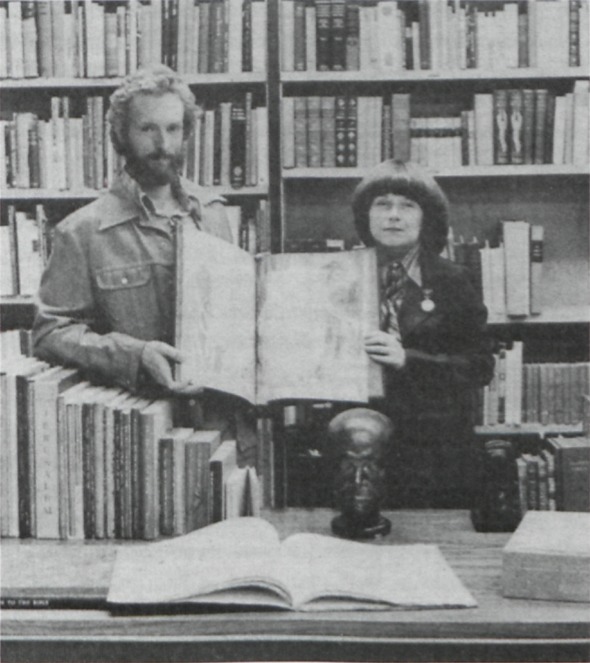 In his letter of January 2007 Roger said that “most of the rarest materials have gone [to the University of Tulsa library] and what remains are separate plates, books about Blake’s circle, the ephemera (sales catalogues, exhibition catalogues, and so on) and the critical materials on Blake, art history, 18th- and 19th-century literature.”

In imitation of it [Blake Newsletter], Professors Kay and Roger Easson established the semi-annual Blake Studies in 1968. Unlike Sir Geoffrey Keynes’s book (1949, 1971), from which the title is borrowed, Blake Studies has thus far been largely concerned with appreciations and readings, sometimes of a rather ephemeral kind.4

As it turned out, this summary was inaccurate; as Roger told me indignantly, the title of the journal did not derive from the book by Keynes because they had never heard of it when the journal was founded.

The foundation’s book-publishing plans were even more ambitious: “The American Blake Foundation intends to publish facsimiles of America (E), Europe (H), The Song of Los (E), Visions of the Daughters of Albion (F), An Island in the Moon, and The Genesis Manuscript.”5↤ 5. Blake Books 50. They were to appear as Materials for the Study of William Blake, vols. 1-6. I may pretend to some authority on this matter, for I prepared editions of all these save the Genesis manuscript. America (1974) and Europe (1976 [i.e., 1979]) were actually published, but the rest languish forlornly, waiting for the kiss of a prince or angel to awaken them from their long sleep.

The facsimile of America copy E was produced in three forms: (1) 474 numbered copies bound in peach-red linen; (2) 26 copies lettered A-Z in quarter red morocco with marbled boards, signed by the editor; and (3) 5 copies in full morocco, signed by the editor. The morocco copies contained extra reproductions. At the time there was an epidemic of Americas: William Blake Trust in full color (1963); in Stony Brook in reduced size (1969); American Blake Foundation in monotone (1974); Blake Newsletter (Albuquerque, 1975, $2.50), for teachers; and illustrated by Paul Peter Piech and “assisted by the American Blake Foundation” (1977, £50). The only previous separate editions had been the color facsimile by William Muir (1887) and a monotone edition (1947), and there has been no separate paper edition since.

According to the colophon to the facsimile of Europe copy H, “149 copies are numbered 1-149 and bound in fine linen. 26 copies are lettered A-Z and 10 are bound in quarter morocco with marbled boards.”6↤ 6. A flier advertised “100 copies only, loose in portfolio made of light blue linen, within dark blue slipcase. Gold Stamped. $60.00 each,” “signed and numbered by Professor Bentley,” with no reference to any other form of publication. A portfolio of loose sheets bore the imprint “Memphis, 1978”; my copy was received 5 March 1979. The limited edition colophon says it was published in “Bloomington, Illinois” (home of Indiana University). Roger was not sanguine about the edition’s commercial prospects; he wrote to me on 3 October 1978, “I will very likely lose my shirt on Europe too.” The last two forms included extra reproductions. However, Essick, the most comprehensive and systematic Blake collector of our time, tells me that he has a copy issued with loose leaves in a cloth portfolio with a slipcase (can this be from the set “bound in fine linen”?), signed by the editor. He has never seen a copy of the issues of Europe in quarter morocco or bound in fine linen.

The quarter-morocco bindings over marbled boards numbered and signed by the editor imitate the far more expensive Blake Trust facsimiles. If you’re going to imitate, imitate the best.

The American Blake Foundation also produced two more volumes (and proposed a third which has never appeared). These were the most important work it accomplished.

Volume III with plates designed or engraved by Blake 1797-1827 was never published.

The financial returns were never as substantial as Roger had hoped. As he wrote to me in January 2007, “What monies we earned from publications went to pay publication costs. Those monies never covered the costs as they were supposed to, and Kay and I covered the shortfalls.”

In 1979 the Eassons apparently abandoned their independent book-publishing program. Roger said to me in a letter of 12 March 1979 that they had tried to persuade Shambhala to take over the American Blake Foundation series. However, Shambhala insisted “on a popular not a scholarly format,” so the Eassons “had to redesign the series completely.” By this time they had already produced facsimiles of The First Book of Urizen (G) and Milton (B) in 1978 for Shambhala’s Sacred Art of the World series. They had also, as Roger wrote to me, prepared for Shambhala two “triple volumes” consisting of The Book of Thel, The Marriage of Heaven and Hell, and Visions of the Daughters of Albion for the first and America, Europe, and The Song of Los for the second, “projected for begin page 158 | ↑ back to top Spring 1980.”7↤ 7. In his letter of October 1978 Roger said, “The series will contain all the prophetic books in full color, except probably Jerusalem, and hopefully we will continue into the other book illustrations as well.” Perhaps by this time Shambhala had noticed that Blake’s works are scarcely what would be regarded by the religious as forming part of the Sacred Art of the World, and no more Blake titles appeared in the series.

Roger tells me that the American Blake Foundation was dissolved in the early 1980s. In the autumn of 2008 most of the Eassons’ remaining library of Blake was being sold through John Windle. For instance, Victoria University in the University of Toronto acquired in October 2008 the Eassons’ very curious copy of “Spring” pl. 2 (Songs of Innocence pl. 23).

The American Blake Foundation was a brave enterprise. Its publications are worthy of honor and deserve to be remembered with respect.