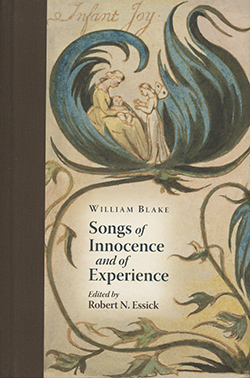 This book is an intellectual and critical gem that is also a great bargain. As an edition of a classic collection of challenging poems for use by serious but not necessarily expert readers, it is as successful as Stephen Booth’s classic facsimile and critical edition of Shakespeare’s Sonnets (Yale, 1977). Essick provides a foundation of perspicacious historicist/materialist contextual and critical analysis, drawing upon (without getting bogged down in) more than two centuries of Blake scholarship; the critical apparatus as a whole promotes a sophisticated appreciation of the contrary states of the human soul while gently steering modern readers, innocent and experienced, around the accumulated obstacles to subtle understanding of these poems and their illuminations.

The edition begins with full-size color reproductions of all but one of the pages now present in the Huntington Library’s handsome copy E of Songs, which Blake assembled for Thomas Butts from leaves printed at various times in various colored printing inks, plus three additional pages: “The Clod and the Pebble,” from the Huntington’s copy N (substituting for the crudely finished posthumous impression of this plate that was added to copy E), the uncolored “A Divine Image” (actually present only in copy BB), and the tailpiece from copy C, a page omitted from all but a few early copies of Songs. The recto/verso printing of the pages Blake had at hand when he assembled copy E entailed some further compromises on his part—“Laughing Song” appears in both Innocence and Experience, and the “Nurses Song” in Experience is effectively salvaged from an accidental double impression in order to make use of the print on the opposite side.

As facsimiles of Blake’s pages the reproductions are not completely successful: the original pages of copy E are matte, for one thing, and these reproductions are all printed on glossy paper, with what appears to be a glossier finish on top (or perhaps just glossy ink). In a note of corrigenda (Blake 42.3 [winter 2008-09]: 111), Essick acknowledges that despite elaborate measures by the imaging and printing team, the reproductions do not accurately represent the tone of the paper on which Blake’s images were printed—the background is “too brown, with a slight rosy hue,” with a result that is occasionally reminiscent of what used to be called flesh-colored bandages. The only page on which the tone of the paper is accurate, reports Essick, is “The Tyger,” which is unfortunate in another way, since in that case the original background has been sunned so badly that the paper tone in the glossy reproduction approximates a varnished stationer’s bag; I think it would have been forgivable in a non-archival facsimile like this one to have manipulated the image digitally to undo or at least minimize the sun damage, which has as little to do with Blake’s intentions for copy E as the posthumous “Clod and the Pebble” leaf that Essick judiciously replaced.

Despite these problems, the colors of Blake’s images appear to be considerably truer here than in most reproductions by offset lithography, and the details are very sharp; I have not seen these reproductions side by side with the originals, but they look right. Copy E is a fine middle-period copy, despite its somewhat heterogeneous constituents, and its rough edges reveal things about Blake’s publishing and printing that are obscured by more polished copies. Further, it is good to have printed images of its pages to compare with those of better-known, more elaborate late copies such as Z (Library of Congress; Blake Trust/Orion/Oxford) or W (King’s College; Princeton/Blake Trust). The luminous, zoomable digital images of most copies in the William Blake Archive <http://www.blakearchive.org> are both magnificent and immensely useful, but there’s still a place for reading and comparing paper-based images of Blake’s works. Indeed, this facsimile is much more successful in one respect than most Songs editions in color: Blake’s careful reinforcement in ink of many of the original printed texts in this copy and the overall sharpness of the images in this edition make it possible to read almost all the poems in the facsimile pages with only a little strain, so that readers can experience text and image together, as Essick recommends and Blake intended.

The general introduction efficiently and clearly covers the potentially controversial matter of Blake’s unique publishing techniques without gratuitously venturing into the disputed territory that lies there, outlines the intellectual and historical contexts that are most relevant, and locates in Blake’s biography the distinguishable but overlapping projects of writing, printing, and issuing the copies of the Songs as finished works. A general account of the development of the Innocence poems follows, once again placing them in broad cultural and historical contexts and then more immediate ones. Essick outlines the rhetoric and ideology of Innocence and then explains the complex binary of Innocence and Experience that emerged from the original project: "just as Blake’s innocence is not heaven, or even Eden, his state of experience is not hell. Both are visions of our own world seen from fundamentally different yet interconnected perspectives. Experience reverses or parodies (in a non-comic fashion) the core habits of mind and themes of its contrary state” (16).

The commentaries upon the individual poems address both illustrations and text efficiently and fairly thoroughly, thoroughly enough that when this edition first appeared I was a little reluctant to use it with beginning readers of Blake. I worried that such comprehensive and authoritative discussion of the major issues in each poem would leave little for students to discover for themselves. Instead, the commentary usually has the opposite effect; far from being inhibited by Essick’s impressively learned guidance, students respond to the lucidity and cogency of his readings with lucid, cogent insights of their own. The great David V. Erdman’s The Illuminated Blake (Anchor–Doubleday, 1974), by contrast, is even more thorough in its own way, and even more open-ended in its analysis, but when students emulate it they tend to absorb its weaknesses rather than its strengths, confounding stray minutiae with minute particulars. 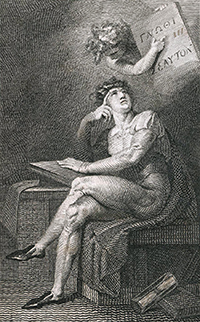 Frontispiece of Aphorisms on Man, 2nd ed. (author’s collection).
In general this edition is more oriented toward literary than visual-arts interests. Although Essick’s knowledge of Blake’s art-historical contexts rivals that of anyone in the business, he is more likely to adduce an extra-Blakean text in his commentary than a picture by another artist. I teach Blake to art and design students, who need to know about literary analogues as much as anyone, but they engage Blake’s composite art most energetically when they see, for instance, the frontispiece to Innocence (and consider its poetic “Introduction”) in conjunction with Blake’s 1788 engraving after Fuseli for Lavater’s Aphorisms on Man. It may be, however, that the critical apparatus that would be necessary to help less visually oriented readers to negotiate the pictorial languages of the Songs would be so voluminous as to be impractical. As it is, reference to specific contextual material of all kinds is limited, and the literary analogues that are quoted tend to be texts that enlighten readers in relatively straightforward ways: thus Wesley’s hymn for children “Gentle Jesus, Meek and Mild” is cited in the discussion of “The Lamb,” but Matthew Prior’s “A True Maid,” in which leering Dick inquires about the health of a young woman named Rose, is not mentioned in connection with “The Sick Rose,” though it is strongly (if rather obliquely) resonant with it and as surely known to both Blake and much of his original audience as Wesley’s hymn.

The typographic texts that accompany each commentary are, at least theoretically, punctuated (and paginated) as in the pages reproduced. Some might argue that rigorous adherence to the punctuational vagaries of this particular copy is inappropriate in an edition intended for general readers, since the marks that appear in this copy are so unconventional that they provide little help for those having trouble parsing Blake’s poetic diction, and the unique punctuation of copy E does not appear to reflect concerted authorial intention. In this instance I believe that Essick is correct in minimizing intervention. An editor of an illuminated Blake text who supplies punctuation along conventional lines risks obscuring ambiguities that students can fruitfully explore, and in an edition of a particular copy of a particular illuminated book there is little point in concocting a super-text based on principled extrapolation from all copies, as Erdman did in his editions of the poetry and prose. Essick sensibly follows the practice of the Blake Archive, which aspires to reproduce and transcribe all copies of the illuminated books in all their individuated multifariousness.

If the textual principle here corresponds to that of the archive, the practice diverges—even not intervening, it turns out, can take different paths and present thorny difficulties. Essick’s transcriptions differ in small ways from both those of the archive and, by my eyes, from the text as it appears in copy E. For instance, Essick’s transcription of “Infant Joy” omits the clearly formed if textually ambiguous dash-oids that the archive includes at the end of lines 2 and 5, a decision unremarked in the textual notes. Because the pen-and-ink reinforcement of the printed texts in Songs E often goes beyond touching up to complete rewriting, it could be argued that the generally sparser punctuation in writing ink is more deliberate than the printed punctuation, which Blake often left so faint, as in “The Tyger,” that for reading purposes it isn’t there. But even Blake’s very deliberate-looking repunctuation in ink isn’t consistently more conventional or helpful than what it replaces, as in line 17 of the “Introduction” to Innocence, where a clearly printed comma is overwritten with a clear, and clearly unconventional, period in ink. In the end, though, I’m not sure it would have been very edifying if Essick had explained and adjudicated every punctuational crux that the text presents: his transcriptions are helpful and careful, and the reproductions of the pages are clear enough that readers can see for themselves how complex Blake’s punctuation can be.

If it should come to pass that the Huntington Library decides to offer a second edition of this fine book, I am not sure what I would recommend changing. The sturdy-seeming sewn hardcover costs only a few dollars more than the blurry paperback edition of copy Z now offered by Oxford, so a less expensive binding isn’t particularly pressing, even for classroom use (I am very taken with the double bookmark ribbons, one for Innocence and one for Experience, or one for image and one for commentary). I would like to see the imaging and printing experts take another stab at rendering the background color of most pages more correctly, and tweaking “The Tyger” to lose its Hollywood tan, but I suspect that changing to a less glossy paper would endanger the accuracy of the color and the clarity that make this edition so satisfactory for reading. Let’s just hope it stays in print for a long time, in any form.