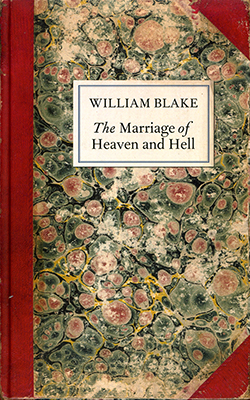 There are nine known complete copies (A-I) of The Marriage of Heaven and Hell; Michael Phillips’s edition reproduces the copy (B) bequeathed to the Bodleian Library by the antiquarian Francis Douce (1757-1834).Copy designations for The Marriage follow
G. E. Bentley, Jr., Blake Books (Oxford: Clarendon Press, 1977). In addition to the variations that make all copies of Blake’s illuminated books distinct, copy B is further distinguished by its frontispiece illustration, the etching entitled “Our End Is Come,” which is not a part of any other known copy of The Marriage. The Marriage is the only undated illuminated book produced by Blake while he lived in Lambeth. However, “Our End Is Come” bears the date “June 5: 1793,” and Phillips’s introduction and commentary offer a detailed exploration of The Marriage in relation to the intellectual and cultural milieux of the early 1790s that appear to have influenced Blake as he produced one of his most celebrated works. Phillips also describes the materials and methods of printmaking during the period in his account of how Blake may have etched, printed, and colored an illuminated work like The Marriage.

An undertaking such as this is certain to invite comparisons with previous (and, in most cases, now scarce) English-language facsimiles of The Marriage with commentaries. Max Plowman’s 1927 edition (which reproduces copy I from the Fitzwilliam Museum, University of Cambridge) is known to students of Blake as a high-quality color facsimile, and Plowman’s commentary includes a significant critical discussion of the structure of The Marriage. The next major edition was the extraordinary 1960 color facsimile by the Blake Trust and Trianon Press, which reproduces copy D from the Library of Congress and includes a brief commentary by Geoffrey Keynes. Clark Emery’s 1963 edition reproduces Plowman in black and white and is not particularly noteworthy for its commentary. Keynes’s 1975 edition reproduces copy H (also from the Fitzwilliam) and is probably the best known and heretofore most easily accessible color facsimile. On the verso of each facsimile plate, Keynes provided commentary on Blake’s writing as well as descriptions of the interlinear and marginal designs, with some enlargements to show detail. With the exception of the third volume of the Blake Trust facsimiles, which was first issued in 1993 and is not a stand-alone edition (one might also mention the digital editions of copies B-M in the Blake Archive), The Marriage has not been published as a single-volume quality facsimile with commentary for more than 35 years. Therefore, Phillips’s update of this challenging work is most welcome.

Phillips’s edition is available in paperback as well as in a hardback collector’s edition,I have not examined the hardback collector’s edition, but Su Wheeler of Bodleian Library Publishing has kindly informed me that the hardback edition reproduces the late eighteenth- or early nineteenth-century binding of the Bodleian copy (half red morocco over marbled boards—see image of cover). and contains a color reproduction of The Marriage (B), preceded by introductory and contextual materials and followed by plate-by-plate commentary and a bibliography. This edition also includes reproductions of copies K (proof copies of plates 21-24) and M (a separate issue of “A Song of Liberty”), plate 14 from copies A, C, H, F, E, D, G, and I (“to illustrate how Blake altered the way each was finished over a period of more than 30 years” [31]), and the alternative sequence of plates 15, 14, 12, and 13 from copy G. Phillips’s plate-by-plate commentary is keyed to literary works and Blake scholarship and includes the most extensive analysis of the illustrations and interlinear and marginal designs in The Marriage that I have seen. Whereas earlier reproductions, such as that in David Erdman’s Illuminated Blake (1974) or in his essay “Reading the Illuminations of Blake’s Marriage of Heaven and Hell,”David V. Erdman with Tom Dargan and Marlene Deverell-Van Meter, “Reading the Illuminations of Blake’s Marriage of Heaven and Hell,” William Blake: Essays in Honour of Sir Geoffrey Keynes, ed. Morton D. Paley and Michael Phillips (Oxford: Clarendon Press, 1973) 162-207. occasionally provide enlarged details of plates, Phillips’s treatment exceeds previous efforts in detail and in the quality of the reproductions. (I count more than 100 enlargements of details from all plates but one of The Marriage in Phillips’s commentary.) Readers with access to Bentley’s Blake Books and Blake Books Supplement will also notice that Phillips has newly measured leaf sizes in all copies of The Marriage and that the dimensions and descriptions provided in the helpful checklist of copies differ in several instances from those recorded by Bentley.

In his introduction, Phillips observes that “the story behind the creation of Blake’s work is every bit as controversial as what it has to say” (2). Readers familiar with the controversy concerning Blake’s printing methods (for instance, whether he printed his plates using one or two pulls), which occupied many pages of this journal in 2002,See Robert N. Essick and Joseph Viscomi, “An Inquiry into William Blake’s Method of Color Printing,” Blake 35.3 (winter 2001-02): 74-103; Michael Phillips, “Color-Printing Songs of Experience and Blake’s Method of Registration: A Correction,” Blake 36.2 (fall 2002): 44-45; Martin Butlin, “‘Is This a Private War or Can Anyone Join In?’: A Plea for a Broader Look at Blake’s Color-Printing Techniques,” Blake 36.2 (fall 2002): 45-49; Essick and Viscomi, “Blake’s Method of Color Printing: Some Responses and Further Observations,” Blake 36.2 (fall 2002): 49-64; Butlin, “William Blake, S. W. Hayter and Color Printing,” Blake (2002) [online only]; and Essick and Viscomi, “Response,” Blake (2002) [online only]. may be relieved that Phillips does not return to this topic except for brief comments in the introduction (32-36). He does not shy away from controversy, however, with respect to the question of whether Blake completed The Marriage in 1790 or 1793. Phillips devotes considerable space in his introduction to developing the argument that The Marriage “made its first public appearance in 1793 rather than 1790” (42).For arguments in favor of 1790 as the year of completion, see Joseph Viscomi, Blake and the Idea of the Book (Princeton: Princeton University Press, 1993) 233-34 and 237; Viscomi, “The Evolution of The Marriage of Heaven and Hell,” Huntington Library Quarterly 58 (1997): 284-85; Viscomi, “The Lessons of Swedenborg; or, The Origin of William Blake’s The Marriage of Heaven and Hell,” Lessons of Romanticism: A Critical Companion, ed. Thomas Pfau and Robert F. Gleckner (Durham: Duke University Press, 1998) 176-81; and William Blake, The Early Illuminated Books, ed. Morris Eaves, Robert N. Essick, and Joseph Viscomi (Princeton: Princeton University Press/William Blake Trust, 1993) 113-15 and 209-10.

I have only three minor complaints respecting Phillips’s edition. The first is primarily a reflection of my own research interests, but Blake biography as well as his career as an engraver provide some warrant for it: I would have liked to see even greater emphasis in Phillips’s introduction and commentary upon influential members of the circle of Blake’s regular employer Joseph Johnson (such as Richard Price, Mary Wollstonecraft, Joseph Priestley, and Erasmus Darwin). In this regard, I note that Robert Essick’s excellent article “William Blake, Thomas Paine, and Biblical Revolution”Studies in Romanticism 30 (1991): 189-212. (which reads The Marriage in relation to writings from the Johnson circle) is strangely absent from Phillips’s introduction, commentary, and the otherwise almost exhaustive bibliography. Blake engraved more than 80 plates for books published by Johnson between 1790 and 1795, and may have interacted professionally as well as socially with Johnson and his authors during this period. Indeed, The Marriage seems to engage in meaningful and specific ways with ideas that appear in Price’s Discourse on the Love of Our Country (1789), Wollstonecraft’s first Vindication (1790), Priestley’s History of the Corruptions of Christianity (1782) and his edition of Hartley’s Theory of the Human Mind (2nd ed., 1790), and Darwin’s Botanic Garden (1791).

My second concern relates to Phillips’s transcription of the text. For the most part, the transcription matches Blake’s text on a plate-by-plate basis (which Erdman, for instance, does not always accomplish with full accuracy), but there are the familiar difficulties of discerning whether Blake meant to use a comma, period, colon, or semicolon due to imperfect inking or printing of plates. I find several instances where Phillips’s transcription does not agree with Erdman or, it would seem, with this reproduction of copy B of The Marriage. For example, line 13 on plate 11 is transcribed by Phillips as “And at length they pronounced that the Gods” when the reproduction of plate 11 clearly shows “pronouncd” (again, one might cite numerous instances where Erdman either mistranscribed Blake’s words or silently corrected them). Of course, different copies of the same Blake title occasionally have different text on the same plate, either because Blake altered his copperplates between printings or overwrote words or letters on his printed page. In this regard, Phillips’s transcription faithfully renders a variation unique to copy B (from line 16 of plate 26), where Blake wrote “charots” in ink, even though “chariots” printed clearly in all eight other copies.See The Early Illuminated Books 222. It is safe to say that such details do not substantially alter our reading of The Marriage, yet few people would disagree with the importance of properly representing the words and punctuation marks Blake engraved—to the extent, of course, that his media will permit us to discern them.

Finally, the numbering of the color plates may be the occasion of confusion for some readers. There are 52 color plates, keyed to the list on p. vi by numbers in the lower corner of each reproduction (i.e., as figures 1-52). Figures 3, 5, 7-31 are each further identified by Phillips with a typed plate number in pale ochre outside the platemark (i.e., as plates 1-27 of The Marriage) in the upper corner of each image, which is an aid, for example, to comparing each plate with Phillips’s transcription on pages 59-86. Confusion may arise, however, because figures 2-3, 5, 7-31 also have a further handwritten foliation (i.e., 1-28) in the upper corner,Su Wheeler sent an explanation from Clive Hurst (head of Rare Books and Printed Ephemera at the Bodleian Library) in response to my query concerning the handwritten foliation: the numbers were written in pencil by Hurst “many years ago” to identify images to be photographed. which is not explained by Phillips.

Notwithstanding these minor complaints, Phillips has produced a volume that makes one of Blake’s most fascinating works accessible to new readers while also providing an up-to-date critical edition for experienced readers. It will be a valuable tool for students as well as scholars and answers the need for a reasonably priced stand-alone facsimile of The Marriage. Phillips and Bodleian Library Publishing should be commended for completing this difficult undertaking.