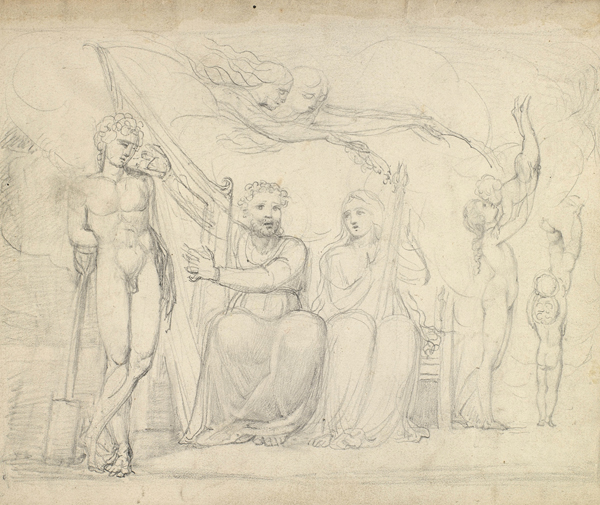 The recto of the newly discovered drawing from the album of drawings descending from Charles Augustus Tulk, now in the possession of the London art dealer Lowell Libson, has received two contradictory descriptions. Robert N. Essick, in his “Blake in the Marketplace, 2012,” Blake 46.4 (spring 2013): illus. 9, sees it as a “central drawing of a man and woman playing harps and perhaps singing” together with “several other sketches, apparently unrelated to the central drawing.” The anonymous entry in Libson’s catalogue British Paintings and Works on Paper, 2013, p. 50, illus., treats it as a single composition, an early stage in the evolution of the various series of watercolors, drawings, and engravings dealing with the biblical story of Job. This is distinct from the drawings on the reverse of the paper, which in spite of the very basic landscape element linking the figures across the bottom and hints of clouds linking some of the figures above, are to all intents and purposes studies of individual figures or groups of figures, most of which later reappear in America or Europe; both recto and verso are conveniently reproduced facing each other in Libson’s catalogue. My first reaction on seeing the drawing, which I have done on a number of occasions, was that the recto is a single composition and one that certainly suggests associations with the book of Job. Further study of the fine illustrations in Libson’s catalogue has confirmed me in my belief that the work is a single composition, though the question of its subject is more problematic.

Unlike the separate figures or groups on the verso, the figures on the recto are more or less contiguous and some elements overlap. The forms of the large harp, placed behind the young man on the left, are carefully drawn so as not to overlap that figure, suggesting that Blake began with the young man and then went on to draw the two harp-playing figures.

Despite the male musician’s being rather more heavily drawn than his companion they are clearly a pair, the one overlapping the other. The conjunction with the girl holding a child seen in profile and taken from, or anticipating, the similar figures in The Dream of Thiralatha seems to be equally deliberate, the edge of the chair touching or just overlapping the girl’s heel (this can be seen particularly easily in the detail of the drawing in Libson’s catalogue). Both pairs of children are set slightly further away than the two musicians and indeed, unusually for Blake perhaps, there is a distinct recession in depth in the placing of the figures, from the young man in the foreground on the left by way of the two seated musicians to the two children.

This recession is emphasized by two parallel lines running across the paper. The further one is partly drawn, partly implied, and starts with the soles of the feet of the children, is continued with the bottom of the leg of the chair, and carries on to the left of the harp of the male musician, where it is more strongly drawn than the other horizontal lines on the background feature both above and below, an emphasis that seems to have little or no descriptive function. This continuity of line is surely not accidental. The other line runs across the foreground, starting perhaps as a shadow cast by the young man on the left but continuing right across to the right edge of the paper, neatly underlying and unifying what I see as a single composition.

The two figures above direct what seem to be two somewhat different forms of evil force onto the female musician and the larger group of children, again with a slight recession in depth. Incidentally, the further airborne figure would appear to be male, with a long beard that overlaps the arm of the accompanying female figure. Both these figures emerge from clouds indicated by curving lines that extend across the paper from the left edge, above and to the left of the young man, to the right margin above the children. The clouds even seem to blot out the top of the upright element of the chair between the female musician and the largest child. The background on the left is difficult to make out but reinforces the impression that these figures are in a particular setting, not just randomly spread across the sheet of paper.

The subject of the drawing is less clear. As Essick points out, harps are not solely associated with Job and his family (indeed, they hardly appear in the biblical account save, at Job 21.12, as appurtenances of the wicked together with the timbrel and organ). However, the only other known pair of figures playing harps is Har and Heva in the lost fifth illustration to Tiriel. Nor does the head of the putative Job resemble any of Blake’s other depictions. In fact this baby-faced, slightly weak and epicene character does not seem to occur anywhere else in Blake’s large repertory of facial types. Nor does the number of children shown match the seven sons and three daughters of the biblical text. But it is difficult to find another match to the depiction of a group of figures, apparently related as in a family, being attacked by supernatural forces. It could be that Blake had some more general idea as he made the drawing of an apparently happily settled family unexpectedly attacked. This could have later evolved into the series of illustrations to the book of Job.