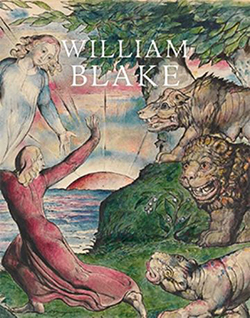 This exhibition at the National Gallery of Victoria International features the world-class collection of Blake works housed there, an impressive 124 individual items spanning the length of his career. Most of the gallery’s Blake holdings were acquired in 1918–20 through the Felton bequest.A wealthy businessman, Alfred Felton died in 1904, leaving a will that dedicated £383,163 to art and charity, “with half of the interest earned to be used in perpetuity to buy works for the National Gallery of Victoria.” The Felton bequest “transformed the NGV into one of the most lavishly endowed public galleries in the British Empire with greater funds at its disposal than London’s National Gallery and the Tate combined” (John Mangan, “The Bequest of a Century,” Age 12 Jan. 2004). Much of the NGV’s impressive collection of Australian and international art is a direct result of the generosity of the bequest. These include thirty-six of 102 watercolors illustrating the Divine Comedy, two watercolors illustrating Milton’s Paradise Lost, the set of twenty-two engravings to the book of Job, and three prints from Blake’s prophetic books. Copies of Songs of Innocence and Night Thoughts were added to the collection in the 1980s, and other works have been acquired from time to time. Because of the sensitivity to light of the works in the collection, the NGV’s Blake holdings are displayed very infrequently; the last exhibition was held fifteen years ago, and the next one will probably not take place for at least another decade.

Images of the installation are courtesy of the National Gallery of Victoria.

As befits one of the gallery’s most prized collections, the Blake exhibition takes pride of place in the front section of the entry level of the NGV International. The exhibition space is perhaps most notable for its dramatic use of black: black backgrounds and black shades feature throughout the display. This use of black is an important element of the gallery’s attempt to limit the collection’s light exposure to a bare minimum. However, it also functions very effectively to draw the viewer’s attention to the works on display, throwing into stark relief the gorgeously saturated colors of Blake’s illuminated prints.

For those of us who have come to Blake through the medium of his illuminated poetry, one of the most interesting aspects of the collection is its focus on works in which Blake was a collaborator in the creative process, rather than sole progenitor. For example, the front room of the exhibition is dominated by the artist’s commercial reproductive engravings and illuminated prints. Perhaps the most striking and topical of the former is Blake’s idealized portrait of an indigenous family in New South Wales. This engraving, based upon a drawing attributed to Philip Gidley King, lieutenant governor of Norfolk Island, was produced for John Hunter’s important early history of Australia, An Historical Journal of the Transactions at Port Jackson and Norfolk Island (1793). It, along with engravings from John Stedman’s Narrative, of a Five Years’ Expedition, against the Revolted Negroes of Surinam (1796), reflects the sensitivity with which Blake represented those suffering under the forces of colonialism during this period. 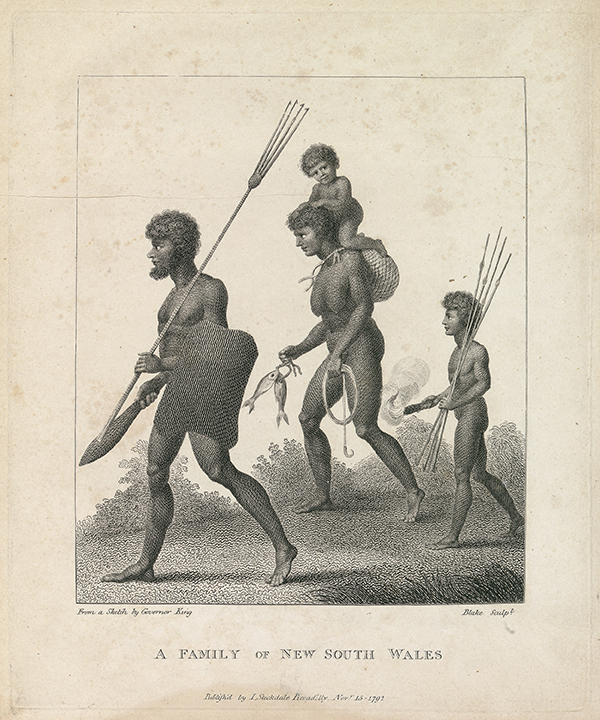 Opposite these images are plates from one of several copies of Songs of Innocence known to have been printed before the addition of Songs of Experience in 1794. The NGV’s copy (X) is a characteristically subdued printing of the volume, with the gallery’s three vibrant examples of Blake’s illuminated printing, housed in the same section of the exhibition, providing a stark contrast to the almost monochromatic palette of Songs of Innocence. Indeed, if there is anything to be lamented about the NGV’s Blake collection, it is that it does not have more examples of his strikingly illustrated prophecies. The plates that it does own, in particular plate 21 from The First Book of Urizen, depicting Los, Enitharmon, and Orc, are fine examples of his work, and leave the viewer pining for more. 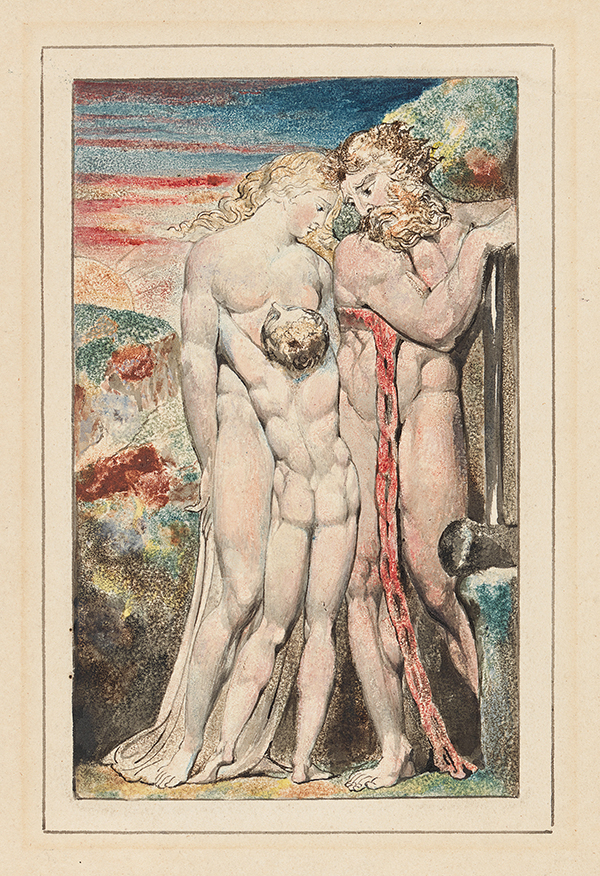 From this section of the exhibition, we move into the larger part of the collection, which focuses on Blake’s illustrations for the works of other authors. The gallery has a beautiful colored copy of the incomplete edition of Edward Young’s Night Thoughts illustrated by Blake and a copy of Robert Blair’s The Grave, a book commissioned to be illustrated and engraved by Blake, though eventually his designs were engraved by Louis Schiavonetti. The exhibition also includes a wonderful copy of the third state of Blake’s large engraving of 1810, “Chaucers Canterbury Pilgrims.” Although this engraving was a commercial failure, its highly detailed work engages with The Canterbury Tales in ways that repay careful attention.

The final part focuses on commissions secured for Blake through John Linnell. The first of these is a series of wood engravings designed to accompany Dr. Robert John Thornton’s school text The Pastorals of Virgil. These tiny engravings exhibit an expressiveness that we have come to associate with the artist, but they are perhaps overshadowed by the gallery’s two beautiful examples of Blake’s watercolors for Milton’s Paradise Lost commissioned by Linnell for his own collection. Linnell also commissioned Illustrations of the Book of Job in 1823, and the gallery’s very fine set of these engravings allows the viewer to see clearly the intricacies of Blake’s interpretation of the story of Job. His designs appear all the more striking when rendered in black and white. 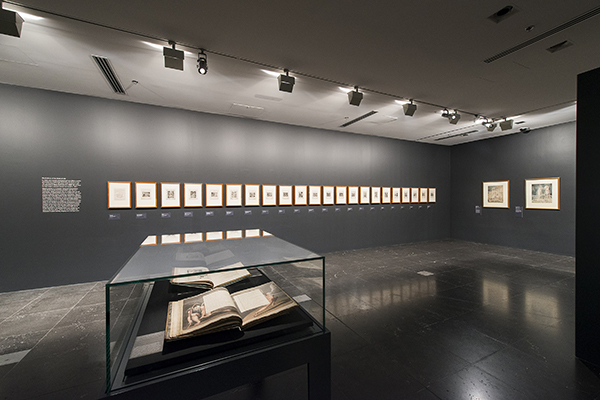 The jewels in the crown of the NGV’s collection are the thirty-six illustrations for Dante’s Divine Comedy, commissioned by Linnell in 1824 and unfinished at the time of Blake’s death in 1827. The gallery contains beautiful examples of completed watercolors, such as The Vestibule of Hell and the Souls Mustering to Cross the Acheron, alongside evocative incomplete works, such as The Goddess of Fortune. The range of drawings is impressive in that it allows for a detailed comparison to be made between the saturated, deep colors in which Blake depicted the underworld and the paler, more ethereal colors associated with the world of paradise. 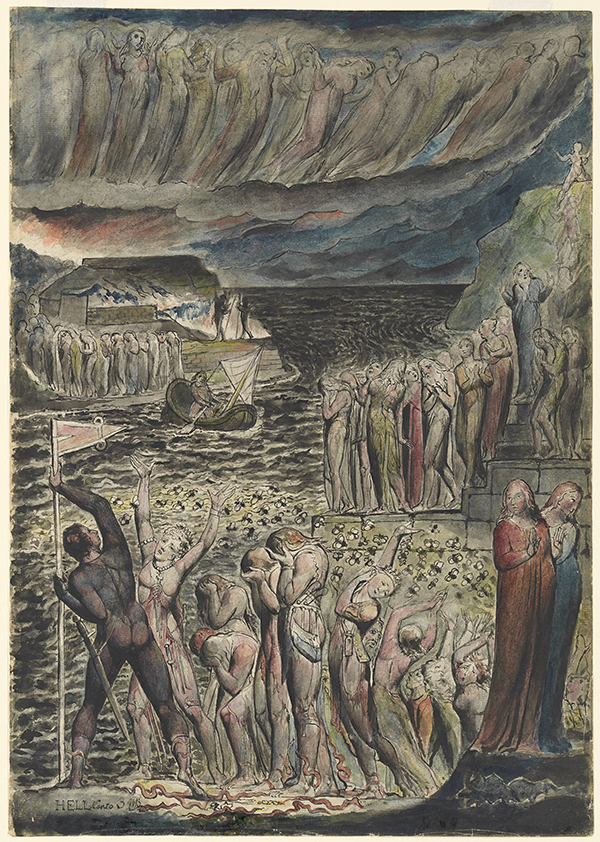 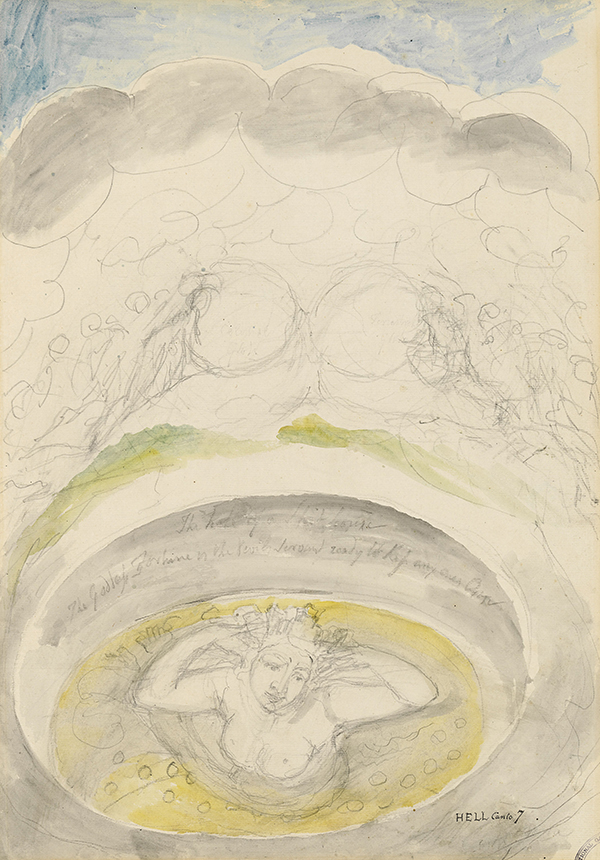 The catalogue accompanying the exhibition includes gorgeous and finely detailed reproductions of all of the works on display, and would be a welcome addition to any Blakean’s library.