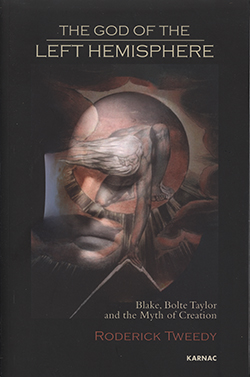 Roderick Tweedy’s The God of the Left Hemisphere compares the attributes of Blake’s Urizen to the characteristics of left-brain-dominated minds, suggesting that Blake’s mythology anticipates the claims of contemporary neurologists who study the lateralization of brain functions. Tweedy’s work is based upon the premise that Blake’s descriptions of Urizen are in fact descriptions of the operations of the brain’s left hemisphere, a claim supported by his appendix, “The Symbolism of Left and Right in Blake’s Work.” His study was inspired by a TED talk delivered by Jill Bolte Taylor, a neuroanatomist currently affiliated with Indiana University, who, during her time at Harvard University, suffered a hemorrhage on the left side of her brain. Taylor believes this experience gave her insights both into the human brain and into the possibilities for the transformation of human life and experience, insights that are the subject of her talk and of her 2008 book, My Stroke of Insight (Viking). Drawing from Taylor, Chris McManus’s Right Hand, Left Hand (Weidenfeld & Nicolson, 2002), and Iain McGilchrist’s The Master and His Emissary (Yale UP, 2009), Tweedy paints a picture of left-brain psychology as dominating, hyperrational, moralistic, egocentric, and highly destructive (39), in comparison to right-brain psychology, which is “completely committed to the expression of peace, love, joy, and compassion in the world” (Taylor, quoted in Tweedy 41). The book is an engaging, journalistic treatment of its subject that would be most interesting to a general readership.

After establishing this basic opposition between left- and right-brain thinking, Tweedy proceeds to apply it first to Blake’s mythology (part 1) and then to human history and to a variety of human conceptual structures (part 2) in very broad strokes. Chapters 1 and 2, “The Origins of Urizen” and “Urizen and the Left Hemisphere,” establish his comparison of Urizenic psychology to left-brain psychology employed throughout the remainder of the book. Chapter 1 identifies the rise of Homo sapiens as the beginning of brain bilateralization, which is particularly associated with tool-making and then with language development. Chapter 3, “The Myth of Genesis,” explains that Blake identifies Urizen with the God of the book of Genesis, who is also equivalent to the demiurge of Plato’s Timaeus, the God of Milton’s Paradise Lost, Zeus, Jupiter, Odin, and “Norse mythology, Babylonian and Sumerian creation texts, [and] Vedic cosmogony” in general (36), all of which indicate the emergence of left-hemisphere thinking in their representations of creating deities. Part 1 closes with chapter 4, “The Marriage of Heaven and Hell,” which does not discuss Blake’s work of that name, but rather restates Tweedy’s presentation of left- and right-brain lateralization, using Blake’s title as a trope for his discussion of how practice can help us recover an emphasis on right-brain psychology.

Part 2 begins with chapter 5, “The God of Reason,” which restates and develops Tweedy’s commentary on the nature of left-brain psychology. In this chapter, he identifies Urizenic psychology with all of empirical science, assigning to the latter not only Urizen’s linear thought but also Urizen’s moral deficits, the product of which is thinking that is “without emotion, nuance, metaphor, inflection, personality, insight, or imagination” (77). Thus, empirical science is dominated by “single vision” and “zero empathy” (81). Chapter 6, “Urizenic Religion and Urizenic Reason: R1 and R2,” distinguishes between rationalized religion and rationalized science while still describing both as fundamentally Urizenic in the terms already established. Science in particular is guilty of an “elitist and self-admiring concept of intelligence” that remains with it to this day (100). Chapter 7, “The Left Hemisphere Agenda,” argues that left-hemisphere psychology is primarily concerned with dominance. Tweedy includes a chart (116) that neatly provides a two-column list of the left- and right-hemisphere characteristics that are consistently affirmed throughout this study.

Chapter 8, a seventy-three-page section titled “Twilight of the Psychopaths,” first identifies Urizenic reasoning with “clinical insanity” (129) and then provides an historical account of the rise of brain lateralization over the last 6000 years of human history, beginning with a discussion of the pyramids, the rise of priesthood, and militarism. Depending heavily upon Dave Grossman’s On Killing (Back Bay Books, 1995), Tweedy also considers the unwillingness of most soldiers to fire in battle, violence in the media and in video games, corporate malfeasance, Thomas Harris’s Hannibal Lecter novels, and Simon Baron-Cohen’s concept of “empathy erosion” from Zero Degrees of Empathy (Penguin, 2011), illustrating how all of these cases match perfectly both his previous description of left-hemisphere psychology and the characteristics that Blake ascribes to Urizen. Chapter 9, “More than Man: The Dragon Urizen,” continues Tweedy’s critique of Urizenic religion and Urizenic science, claiming that Urizenic religion is the worship of an impersonal God and accusing Urizenic science of committing the ideological mistake of believing “that the laws of nature are somehow fixed and absolute whilst everything else in the universe evolves” (208). This chapter also identifies Urizenic reasoning with autism and begins a consideration of combined right-brain/left-brain psychology in the section “Humanity and Divinity.” Chapter 10, “The Selfhood and the Fires of Los,” focuses upon a critique of ego or selfhood and considers the possibility of the reintegration of right and left hemispheres, as well as the obstacles to that reintegration. The conclusion, “Sweet Science Reigns,” imagines what an integrated psychology might look like. It is the book’s strongest chapter, as it finally moves beyond descriptions of fallen Urizen to consider the redemptive outcome of Blake’s myth.

Tweedy’s book, though very engaging, exhibits the faults of an extended journalistic treatment of a subject: overreliance on one source at a time and broad and incredible generalizations without significant consideration of specific detail. For example, Ovid’s presentation of Zeus in his Metamorphoses is hardly that of a rational moralizer. Tweedy attempts to argue too big a thesis, which leads inevitably to a lack of focus and too much repetition of the same point. In the same vein, he does not consider counterarguments or alternative positions except to dismiss them as examples of Urizenic reasoning, inadvertently setting up neurologists studying brain lateralization, Blake, and himself as the only right-thinking beings to exist since the rise of Homo sapiens. In this way, he seems to address all possible counterarguments only with an accusation. Because Tweedy relies almost exclusively on S. Foster Damon’s Dictionary for his interpretation of Blake, with some use of Frye late in the book, those who are familiar with Blake studies will learn nothing new about Blake from this book. Not including reprints of older work, there are only five citations of Blake scholarship later than 1980 in the bibliography, none of which appears to be quoted directly except for Peter Ackroyd’s biography. Tweedy’s reliance on Damon does keep him from making egregious mistakes, however, so his readings of Blake will be familiar to Blake critics despite his blanket dismissal of their work.

In many ways, this work illustrates the dangers of relying upon superficially grasped science for literary interpretation: there is no serious discussion of the scientific literature on brain lateralization anywhere in the book. Tweedy does not seem to distinguish between non-scientific claims made by a scientist for non-specialist audiences and scientific work itself. Taylor’s TED talk and her book are not peer-reviewed research, and they make claims and arguments unacceptable in that context. The same is true of his reliance on McManus’s and McGilchrist’s work. McGilchrist develops a historiography based upon brain lateralization, but he does not provide peer-reviewed research supporting the existence or mechanism of the phenomenon, and historiography isn’t empirical science. Finally, recent research is beginning to discredit the concept of brain lateralization altogether. Dr. Jeff Anderson, director of the fMRI Neurosurgical Mapping Service at the University of Utah, asserted in a LiveScience interview that, after a review of thousands of brain scans, “it is not the case that the left hemisphere is associated with logic or reasoning more than the right.” Anderson also told LiveScience that “creativity is no more processed in the right hemisphere than the left.” If this is the case, what remains of Tweedy’s study or Taylor’s claims?

Overall, the book attempts three tasks: a comparison of Blake’s Urizen to left-brain thinking (a comparison that seems valid), a description of the effects of left-brain acts and ideas on world history (references to Blake are irrelevant in this section, but without them Tweedy would simply be replicating the work of McGilchrist), and a description of the benefits of a reintegration of right- with left-brain psychology. The book might have a place among the growing body of work that considers the relationship between romantic-era literature and contemporary psychology if Tweedy had abandoned the second task and more fully developed the first and third, and if he had done so with a deeper knowledge of both the science of brain lateralization and the religious and philosophical traditions from which Blake drew. Considering these contexts more carefully might have led him to recognize how brain lateralization is perhaps too simplistic an explanation of what has been described in religious and philosophic discourse for centuries, using other terms. Without such careful consideration, however, the book does not rise above repeating the same old insights using only slightly newer language.