The recent identification by Leslie F. Chard (Blake Studies, 1973) of two plates executed by Blake for Sir James Earle’s Practical Observations on the Operation for the Stone (London, for J. Johnson, 1793) has interested me for several reasons. Earle was a predecessor of mine as Senior Surgeon at St. Bartholomew’s Hospital (otherwise known as Bart’s), founded in the year 1123 on its present site just outside the walls of the City of London. He was a distinguished practitioner born in 1755 and elected to the surgical staff of Bart’s in 1784, serving there to within two years of his death in 1817. He married the daughter of Percival Pott, an even more distinguished surgeon on the staff of Bart’s, and wrote a Life of his father-in-law. He was appointed surgeon-extraordinary to King George III, and his third son, Henry Earle, followed in his father’s footsteps as surgeon to Bart’s and as surgeon-extraordinary to Queen Victoria at her accession in 1837.

Sir James Earle’s slender monograph on the technique of “cutting for the stone,” or lithotomy, is an interesting contribution to our knowledge of surgical practice in 1793. Blake’s two plates, each signed Blake sc., are very well executed. The first is a stark representation in line engraving of two instruments used for the operation; the second, wholly etched, is a beautiful rendering of four types of urinary calculi, or bladder stones; their intricate structure is well shown and Blake was evidently working from good drawings, perhaps made by Earle himself. It is to be noted that the book was published by Joseph Johnson, Blake’s frequent employer for making book illustrations in the 1790’s, and that Earle dedicated it to William Long (1747-1818), a surgical colleague on the staff of Bart’s, 1747-1807. This is of particular interest because it is probable that Blake was acquainted with Long. In a letter to William Hayley written on 16 March 1804 Blake mentioned that he was engraving a portrait of Romney, “which was lent by Mr. Long for the purpose of being engraved for the European Magne.” No engraving of Romney published in the European Magazine or elsewhere is known, so that this reference has never been explained, but it strongly suggests that Blake and William Long met over this (apparently abortive) transaction, if not before. The probability is supported by the facts that Long was a friend of both Flaxman and Hayley and owned a copy of Poetical Sketches inscribed to him by Flaxman, who transmitted another copy to Hayley through Long as intermediary (Keynes, Blake Studies, 1971, pp. 42, 44). Long was also an amateur artist and tried to “improve” some of Romney’s pictures in his possession.

I have examined the Bart’s copy of the second edition of Earle’s pamphlet, 1796, which has an Appendix and a third (folding) plate, giving further illustrations of the instruments used in the operation. I have not been able to see Professor Chard’s article, but he no doubt noticed that this third plate too was certainly executed by Blake. The engraving technique is the same as that of the first plate, and the lettering below corresponds with that done by Blake on the plates for George Cumberland’s Thoughts on Outline, 1796. Comparison of this edition with my copy of the first shows that the type was kept standing. The paper is of somewhat better quality and the text, apart from the title-page and the last page, has been printed from the same formes.

I now wish to suggest that Blake was also acquainted with Sir James Earle and so had good connections with my Hospital. In my Catalogue Raisonnee of Blake’s Separate Plates, Dublin, 1956, I recorded as no. xxxvi a portrait of “Edmund Pitts Esq.” executed in stippled lines. It is lettered ad viv: del: J. Earle:Armig. Guliels Blake sculp. At that time I had no clue to the identity of Edmund Pitts and could find in the reference books on artists only the name of James Earle, and American portrait painter from Leicester, Massachusetts, who had exhibited at the Royal Academy, 1787-96, and at the Society of Arts in 1791. This seemed to be a reasonable identification, the only puzzle being why he styled himself Armiger, that is, bearer of a coat of arms. Blake’s association with Sir James Earle is evidence that Sir James was himself the draughtsman, this probability being strengthened by the fact that Edmund Pitts was yet another Bart’s begin page 10 | ↑ back to top 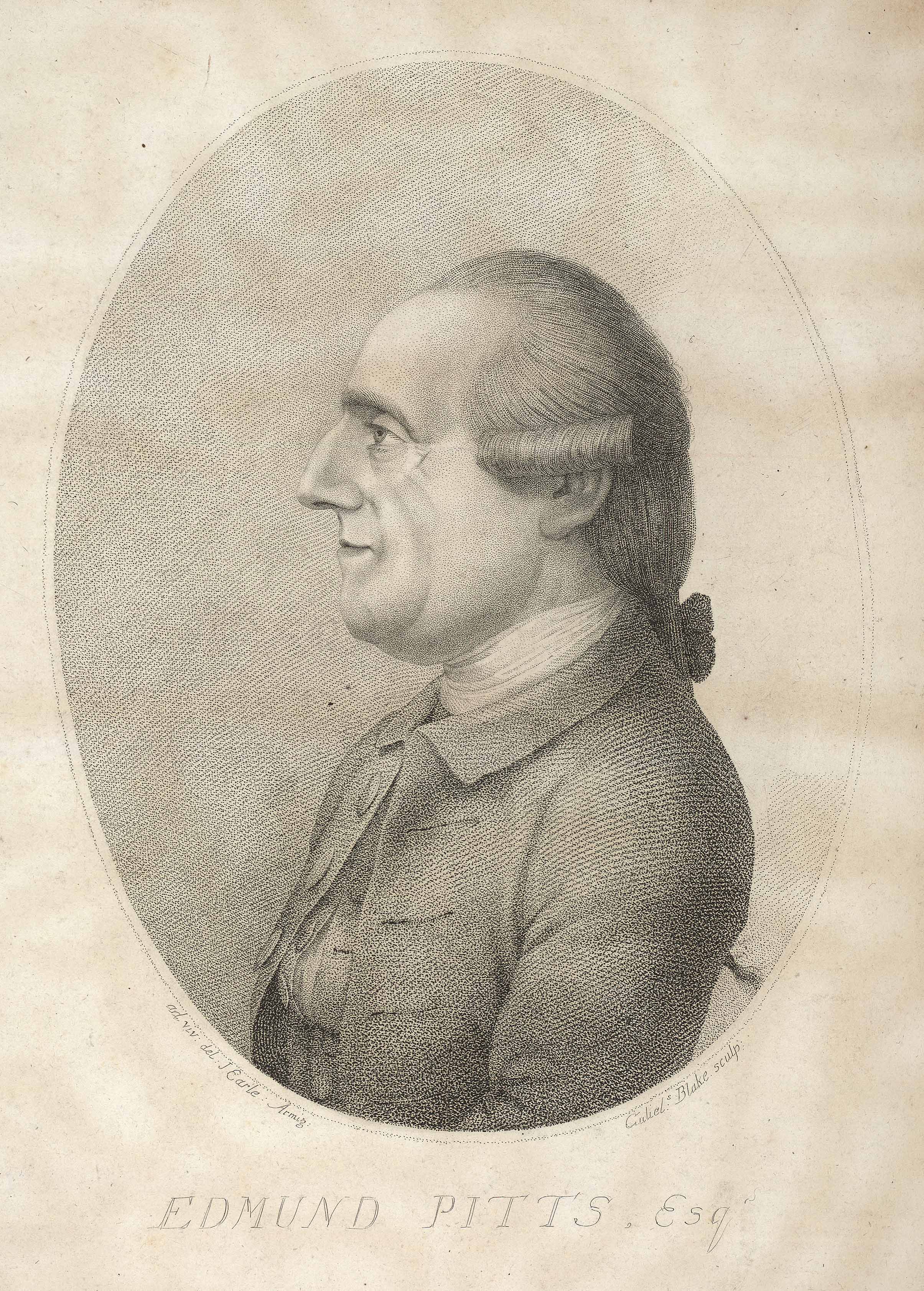 surgeon from 1760 until his death in 1791. Blake’s plate is skillfully executed by his subtle technique of stippled lines, which can be exactly matched in the frontispieces done by him for The Poems of Catullus, 2 vols., London, for J. Johnson, 1795. In spite of this good style of engraving the print indicates the hand of an amateur draughtsman rather than that of a professional, as can be seen in the accompanying reproduction (the first that has been made, as far as I know [see illus. above]). I have remarked elsewhere (“Blake’s Engravings for Gay’s Fables,” The Book Collector, Spring 1972, p. 61) on Blake’s tendency to “improve” amateur work when reproducing it on copperplates, and this portrait of Edmund Pitts indicates that he has tried to do so here, though the handicap was too great for the production of a convincing work of art.

Sir James Earle was not knighted until 1802, when he was President of the Royal College of Surgeons, but is likely to have had the right to a coat of arms by reason of his birth, though this is not mentioned in the DNB. The possibility that the American artist of the same name was related to Sir James cannot be excluded, and he may have been working in England for at least four years before the death of Edmund Pitts, so that either Earle could have made the drawing “from the life,” though the evidence seems to point to Sir James rather than to his namesake.

The print is very uncommon and I know of only four impressions—those at the Royal College of Surgeons, in the British Museum, and in my collection, with one formerly in the W. E. Moss Collection sold at Sotheby’s, 2 March 1937, lot 218, bought by Rosenbach. It has been called a “private plate” and the evidence detailed above suggests that, after Blake’s contact with Sir James Earle over the lithotomy plates he undertook to execute the portrait to oblige his patron. Earle was a practiced writer and had published, besides a number of medical papers, a Life of Percival Pott and an account of Dr. William Austin, a Bart’s physician, 1786-93, prefixed to his lithotomy pamphlet. He might have contemplated writing a biography of his senior colleague, Edmund Pitts, to be illustrated by Blake’s plate from his own drawing. This must remain a matter of conjecture, but I propose that the print should be attributed to Sir James Earle as draughtsman and be dated c. 1793.

[I am indebted to Dr. Nellie Kerling, Archivist to St. Bartholomew’s Hospital, for verification of dates, and to W. E. Thomson’s “William Long, F. R. C.,” Annals of the College of Surgeons of England, IX (1951) 58-63, for other details. I am informed by Professor G. E. Bentley, Jr., that there is a print of the portrait of Edmund Pitts at McGill University. This may be the fourth example mentioned above.]