BY FRANCES A. CAREY*↤ Frances Carey has undertaken postgraduate study at Harvard and the Institute of Fine Arts, New York. She is currently writing her doctoral thesis on “English Religious Painting 1770-1830” for the Courtauld Institute, London University. She is the Newsletter’s new Associate Editor for the United Kingdom. 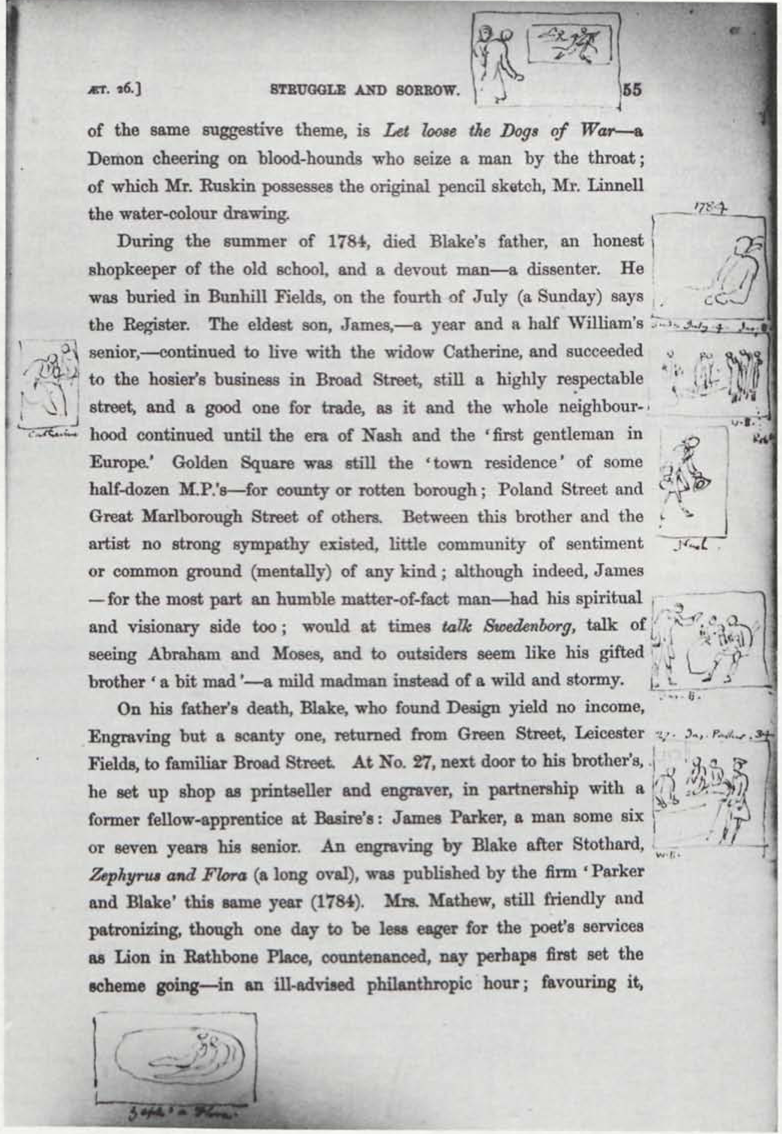 James Smetham’s claim on posterity has largely rested upon his 1869 review of Gilchrist’s Life of Blake which was incorporated in the second edition at Rossetti’s instigation. This sympathetic but conventional mid-Victorian interpretation of Blake only represents a minor aspect of Smetham’s career; his letters and paintings do far greater justice to the complexity of a man, whom Geoffrey Grigson has described as “an imaginative artist who surpasses almost all his time in England.”1↤ 1 G. Grigson, The Harp of Aeolus (London, 1948), pp. 96-97. This article will concentrate upon Smetham’s visual imagination seen in the light of the marginal illustrations with which he annotated his own copy of the Gilchrist Life.2↤ 2 Collection of Dr. Gerald Bindman.

An almost overwhelming degree of spirituality pervades Smetham’s small scale biblical and landscape compositions, which prompted Rossetti to invoke parallels with the work of Blake and Palmer: “In all these he partakes greatly of Blake’s immediate spirit, being also often allied by landscape intensity to Samuel Palmer.”3↤ 3 A. Gilchrist, Life of William Blake, 2nd ed. (London, 1880), p. 429. The emotional energy required to achieve such an effect, did, however, contain the seeds of self-destruction as 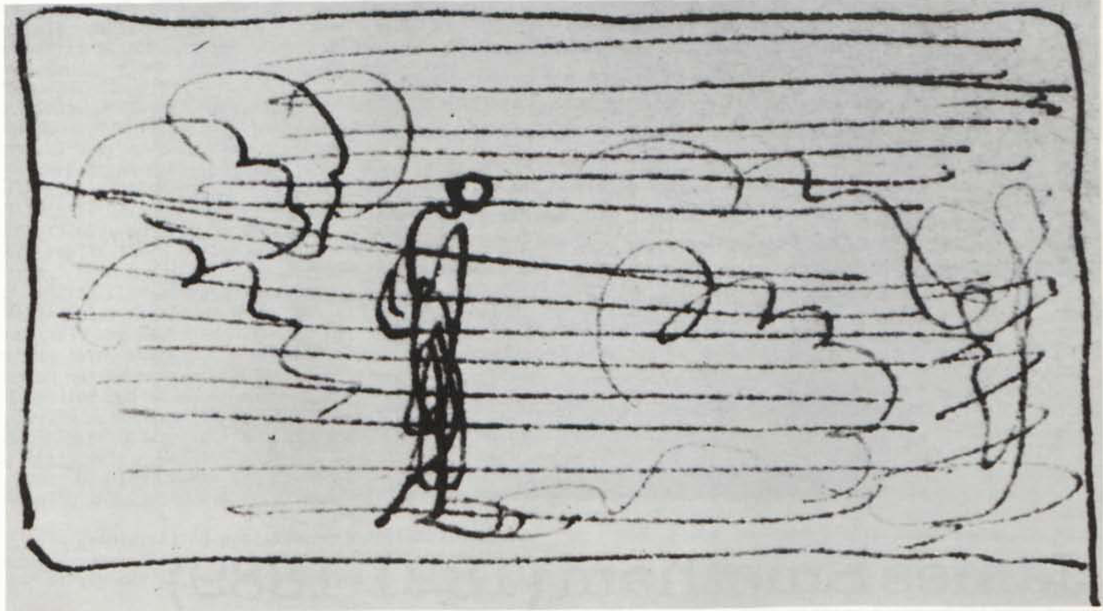 p. 39: “away I go, / And the vale darkens at my pensive woe.”
Ruskin prophesied in 1854,4↤ 4 J. Ruskin, Works, ed. E. T. Cook and Alexander Wedderburn (London, 1903-12), XIV, 461. and Smetham was eventually to subside into an endogenous depressive illness from 1878 until his death of 1889. The Smetham correspondence exhibits some of the same begin page 19 | ↑ back to top intimate, revelatory quality as the Haydon diaries,5↤ 5 J. Smetham, Letters, eds. W. Davies and Sarah Smetham (London, 1891). unfolding a personality which partook of “Blake’s immediate spirit” transmuted by a powerful strain of Methodist piety; this bifurcal influence clearly emerges in the unifying theme of the letters, Smetham’s concept of destiny in terms of a Pilgrim’s Progress which, in visual form, was poignantly summarized by one of his last paintings, Going Home, depicting an old man on the road to death.6↤ 6 Walker Art Gallery, Liverpool. Smetham’s endeavor to develop a fully integrated imagination combining “art, literature and the religious life all in one,”7↤ 7 Smetham, Letters, p. 13. was reflected in a self-imposed regime of intense, disciplined study, the results of which were enshrined in a system of monumentalism; the grandiose designation of monument was in fact applied to a tiny, squared pen drawing, encapsulating in the margin Smetham’s thoughts on the text in question. Shakespeare, the Bible, Tennyson and Gilchrist’s Life of Blake were all subjected to this approach, which was initiated by the artist at eleven o’clock on the evening of 18 February 1848. The creative fervor and elevation of purpose infusing the thumbnail sketches, is eloquently expressed by Smetham’s account of how, in later years, he would revisit his monuments, “pouring the oil of joy on the shapeless stone in which I saw my thought as Michael Angelo in his marble saw hidden the gigantic shapes of Night and Day.”8↤ 8 Smetham, Letters, p. 92.

Smetham’s copy of Gilchrist is a peculiarly apt example of monumentalism since he had been recommended by Rossetti in 1861 as a suitable draughtsman for the line drawings in the text. In the event Smetham was deprived of the commission but in July 1867 supplied his own miniature cycle of the life of Blake, which paid a self-conscious 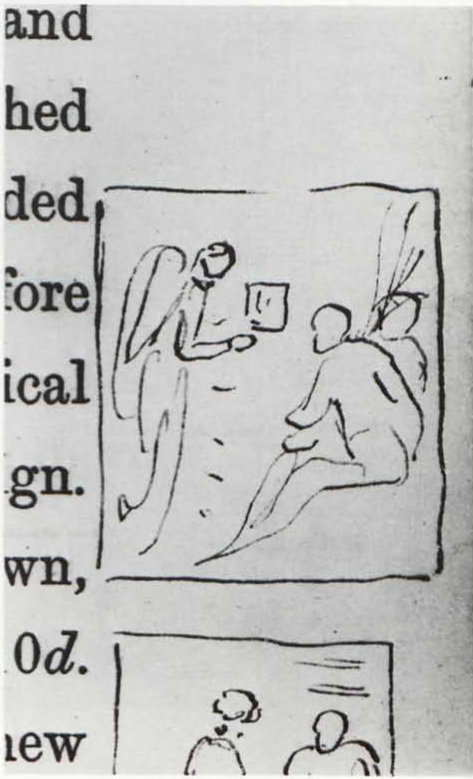 p. 69: “In a vision of the night, the form of Robert stood before him, and revealed the wished-for secret, directing him to the technical mode by which could be produced a fac-simile of song and design.”
begin page 20 | ↑ back to top homage to the marginal illustrations of medieval manuscripts. For Smetham an illuminated book was “a mystery, like the Microcosm” into whose borders were wrought “the whole life and soul and history of the men who did them; but thinly veiled.”9↤ 9 Smetham, Letters, p. 93. The Gilchrist marginal designs provide just such a documentation of the artist’s inner life concealed beneath the commentary on Blake’s spiritual history; author portraits of Smetham himself periodically intrude upon the Blakean cycle, again reminiscent of the practice of medieval scribes and illuminators. The main pictorial narrative includes not only episodes and personalities from Blake’s material existence but also those from his visionary world; “majestic shadows, grey but luminous and superior to the common height of men” encountered on the Felpham shore (p. 159), have as much substance as Mrs. Mathew’s bluestockings (p. 45) or the Godwin circle of radicals (p. 92); a corporeal Robert Blake plays leap-frog with J. T. Smith on one page (p. 57), then later appears in spiritual form to reveal to his elder brother the secret of stereotype printing (p. 69), while funeral processions, whether they be for fairies (p. 159) or Sir Joshua Reynolds 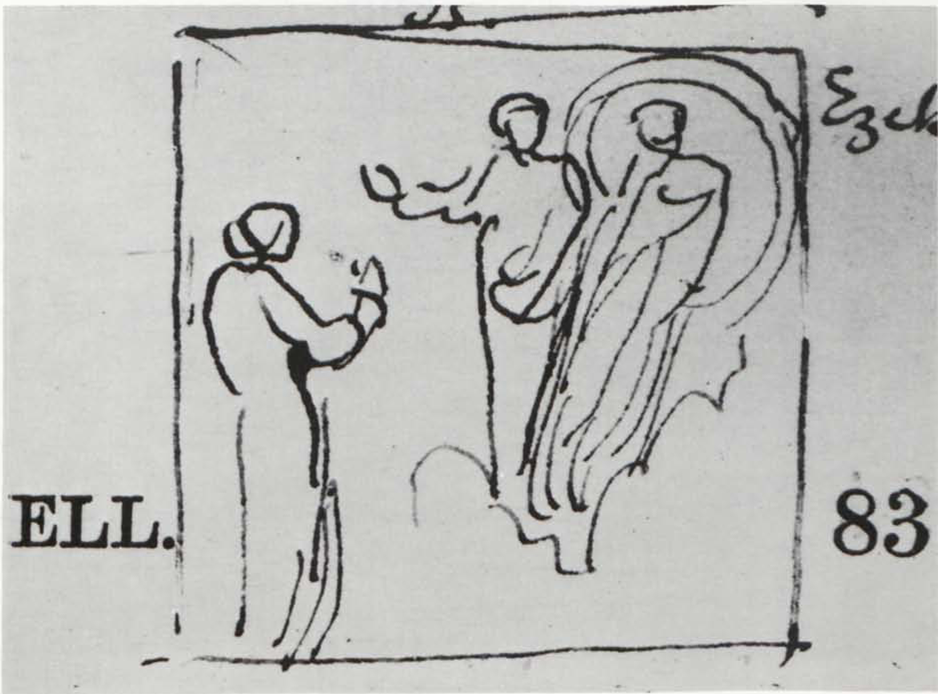 p. 83: Blake’s vision of Isaiah and Ezekiel in “A Memorable Fancy,” The Marriage of Heaven and Hell.
(p. 96), are all treated to the same loving delineation. In the second volume the monuments are almost exclusively confined to William Michael Rossetti’s annotated catalogue, where Smetham used the descriptions attached to each item as a basis for illustration; his own knowledge of Blake’s visual art was probably limited to the reproductions in Gilchrist. Smetham’s naive, literal renderings of poetic images constitute a further category of monument; punctuating the line from the Poetical Sketches, “And the vale darkens at my pensive woe,” a lonely figure is represented wandering amidst gloomy obscurity (p. 39). These evocative visual annotations serve to underline the unifying links between the “whole life and soul and history” of Smetham and his subject, which are perhaps epitomized by his impression of Blake’s soul finding “refuge amid the slights of the outward vulgar throng” in the invisible world (p. 245). begin page 21 | ↑ back to top 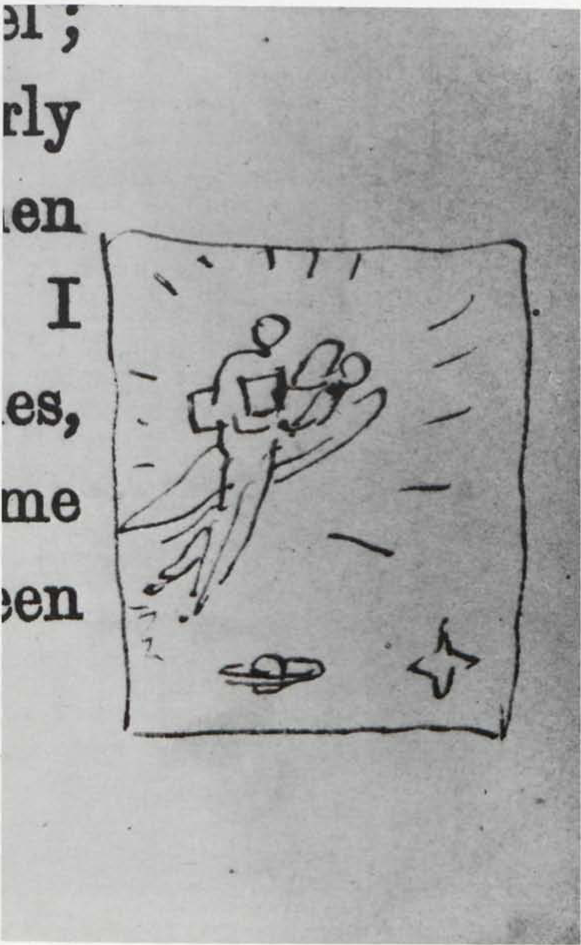 p. 85: “A Memorable Fancy”—“Here I stayed to rest, and then leaped into the void between Saturn and the fixed stars.”
begin page 22 | ↑ back to top 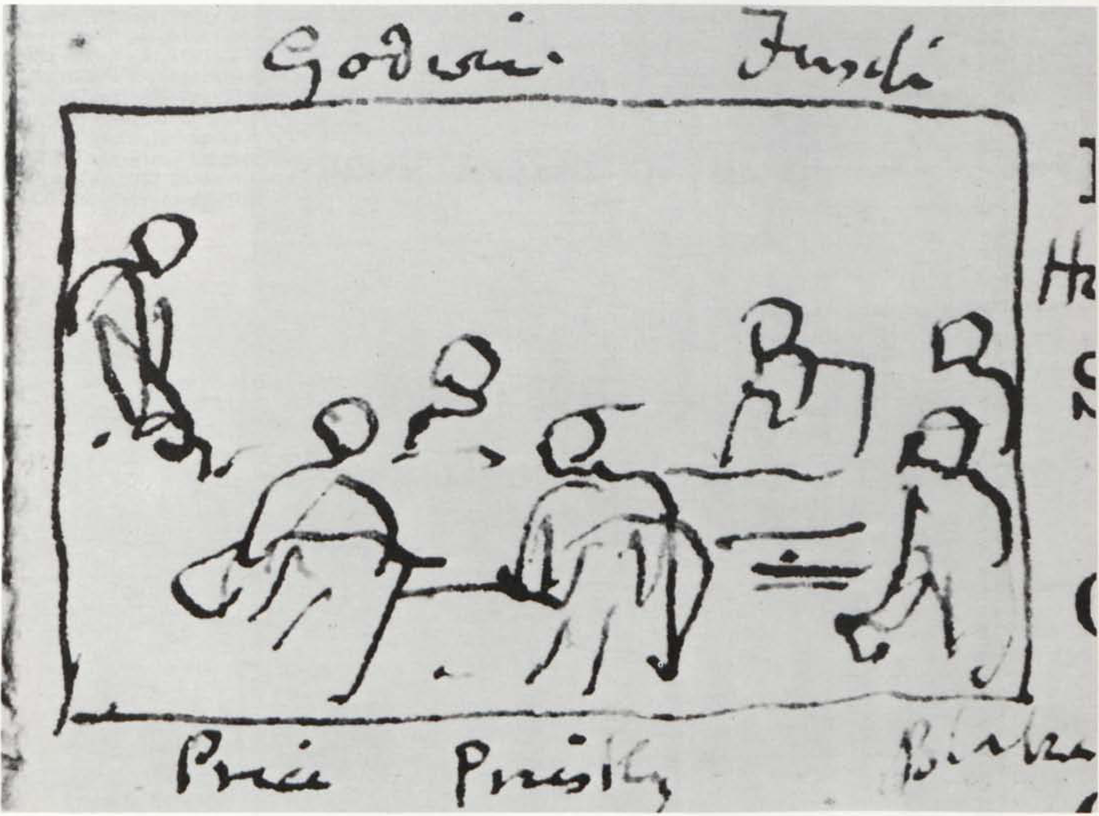 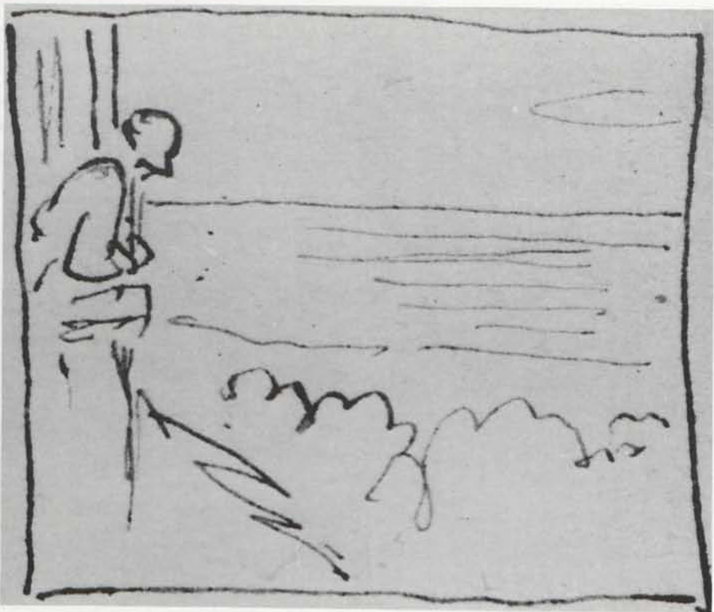 p. 157: Blake at Felpham.   “Often, in after years, Blake would speak with enthusiasm of the shifting lights on the sea he had watched from those windows.” 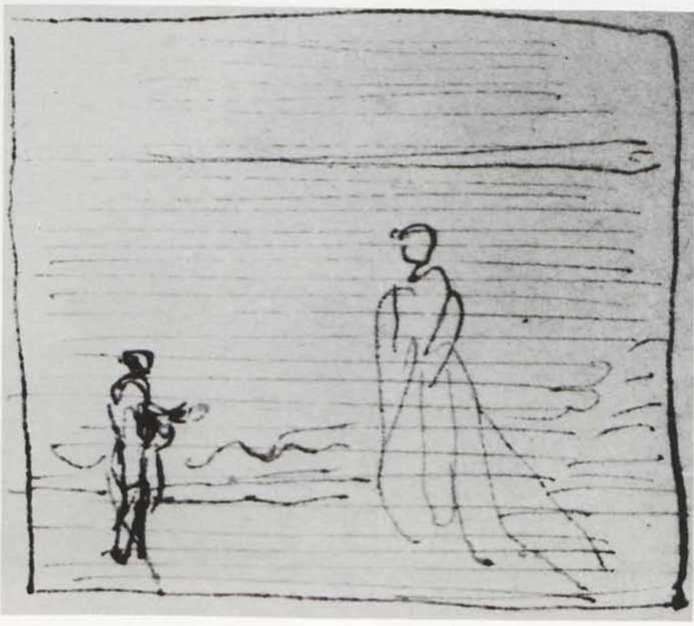 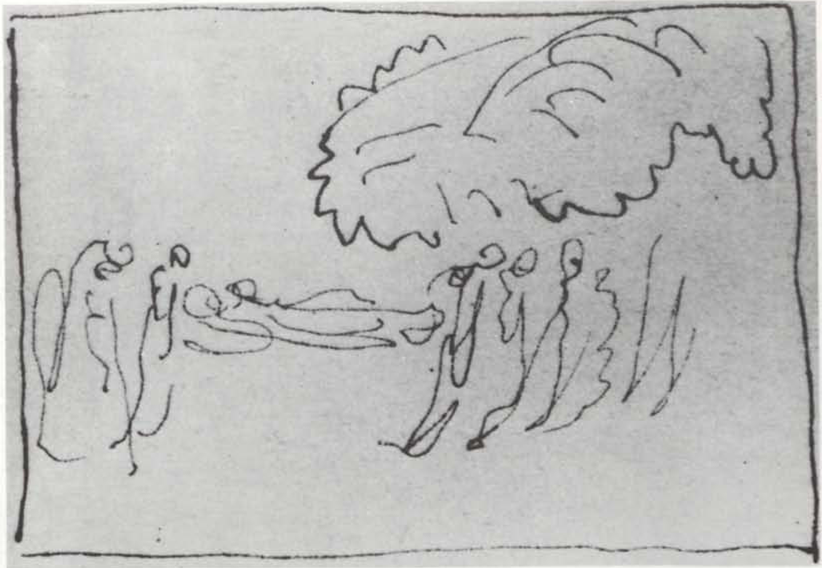 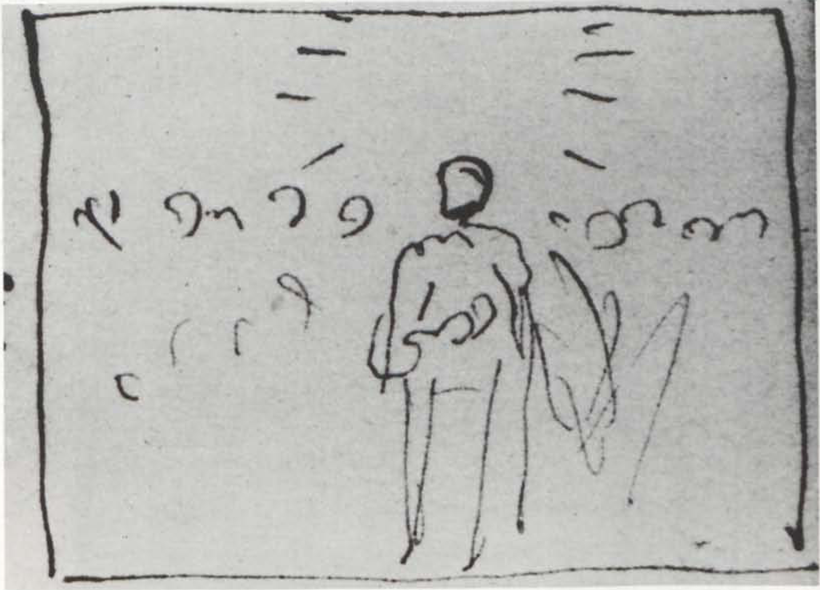 p. 245: Blake’s soul finding refuge in the invisible world amid the slights of the outward vulgar throng.
begin page 25 | ↑ back to top 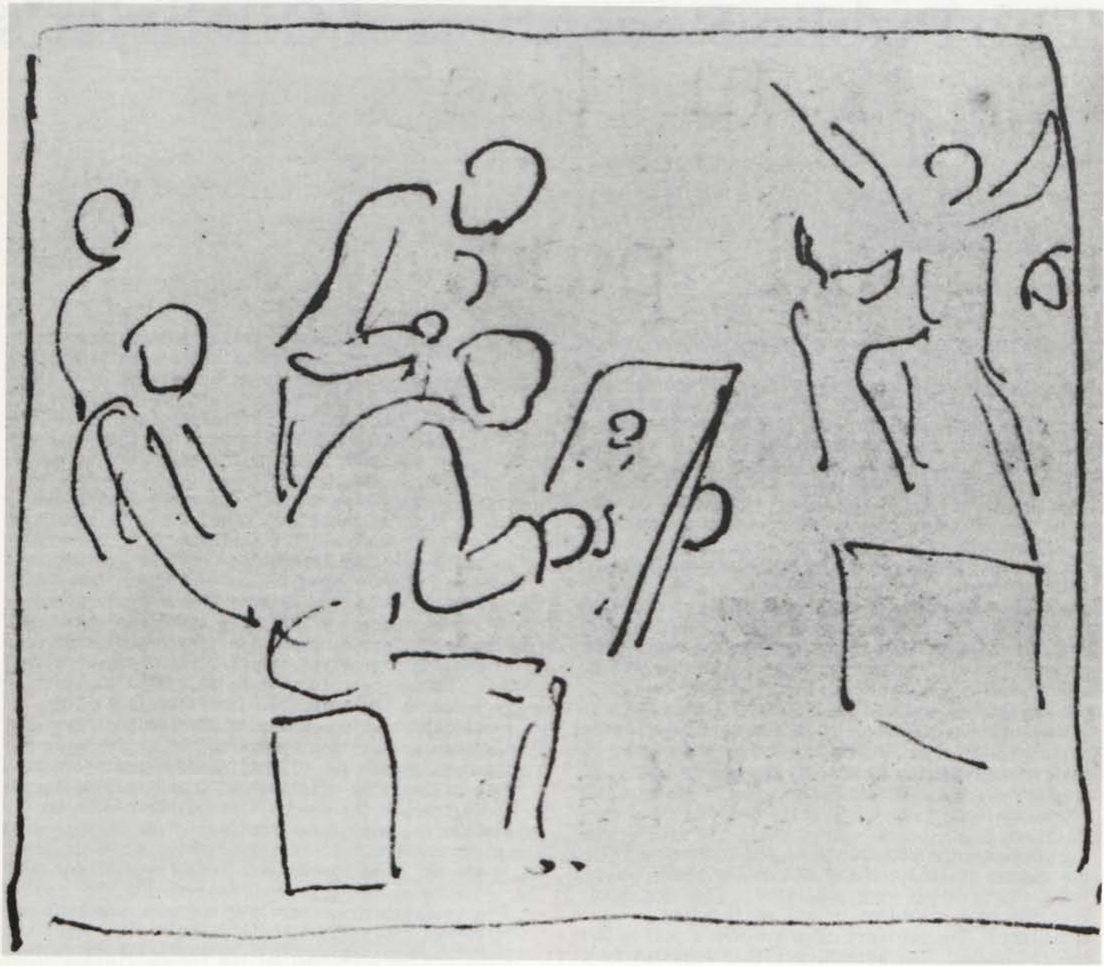 p. 248: Blake drawing the Laocoon in the Royal Academy.