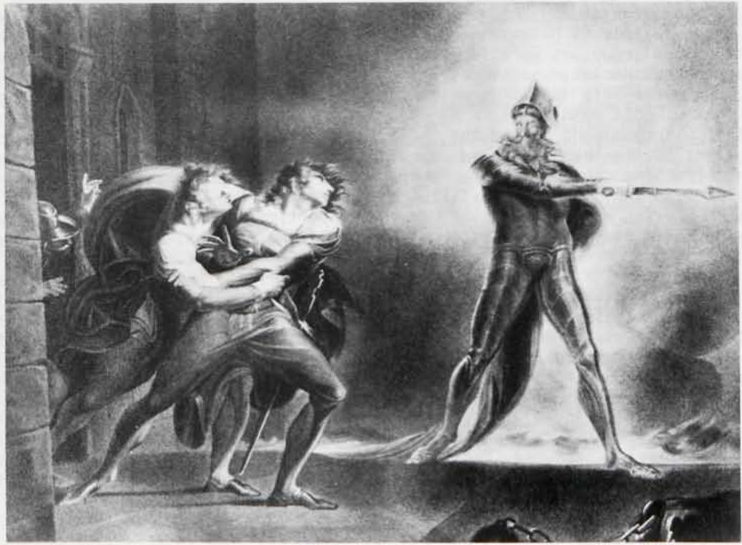 1 Illustration to Hamlet: Marcellus, Horatio, and Hamlet with the Ghost.   Designed by Fuseli, engraved in 1796 for the 1803 Boydell Shakespeare.

Before the middle of the eighteenth century the Ghost scene in Hamlet which attracted artists and engravers was that of the apparition in the Queen’s “closet” (III. iv).*↤ Rodney and Mary Baine are in the English Department at the University of Georgia. They have published a number of articles on Blake and are at work on a book-length study of his animal symbolism. In the latter half of the century, however, artists shifted their attention from this scene to that of the Ghost’s earlier appearance on the battlements and, sometimes, below (I. iv, v). One of the first such depictions was “Garrick as Hamlet,” by Benjamin Wilson, with the mezzotint by McArdell; here Hamlet, alone in the picture, seems with slightly raised hands to listen almost incredulously to the unseen Ghost.1↤ 1 W. Moelwyn Merchant, Shakespeare and the Artist (London: Oxford University Press, 1959), pp. 53, 58; plate 12 (a). We are indebted to Mr. William Gaither (research assistant at the University of Georgia) and to Mr. Robert N. Essick for numerous suggestions. For permission to reproduce the Blake sketch, we are indebted to the Birmingham Museum and Art Gallery; for the watercolor, to the Trustees of the British Museum. The Ghost appears with Hamlet in John Hamilton Mortimer’s version, engraved in 1782 by Walker; here the two figures are isolated, as they are in the scene (I.v) which Blake later favored. Of course Mortimer, like his successors, represented the Ghost as the text prescribes, clad in armor from head to foot, with beaver up, and with a “sable silvered” beard. Doubtless Blake, who admired Mortimer’s work, knew at least the engraving; but Mortimer’s Hamlet, though with drawn sword, seems little perturbed and is weakly represented.2↤ 2 William Ackerman Buell, The Hamlets of the Theatre (New York: Astor-Honor, Inc., 1968), p. 32.

Far more influential upon Blake’s Hamlet scenes was Henry Fuseli. In addition to an inept pen sketch done in his teens,3↤ 3 Gert Schiff, Johann Heinrich Füssli (Zurich: Schweizerisches Institut für Kunstwissenschaft, 1973), II, 28; plate 201. Fuseli thrice did the scene on the battlements (I. iv), each time with Marcellus, Horatio, and Hamlet balanced against the Ghost. Weakest artistically of the three is the last, engraved in 1804 by Joseph Smith for the Chalmers Shakespeare, for here the very corporeal Ghost, centrally placed in a vertical design, faces away from us; and Hamlet, made less important by the dominance of the Ghost, seems rather surprised than agonized.4↤ 4 Schiff II, 409; plate 1296. Far stronger is a pencil sketch, which Blake, however, may not have seen; it incorporates some of the main features of terror and sublimity infused into the scene by Fuseli.5↤ 5 Schiff II, 216; plate 818. Strongest of all is the version Blake almost certainly knew, that engraved in 1796 by Robert Thew for the 1803 Boydell begin page 118 | ↑ back to top Shakespeare (see illustration).6↤ 6 Schiff II, 179; plates 731, 732. In this version, as in the sketch, the violence is heightened by the tension of the struggling group, as Horatio attempts to restrain the outrageous Hamlet, who is determined to make a Ghost of whoever “lets” him. Here, as in the other versions, the Ghost points toward a rendezvous, and the sulfurous moon behind the ghostly head and the turbulent sea in the background (tied to the Ghost by his trailing cape) give a sense of unreality and violence to the scene. The staring eyes of the Ghost, moreover, suggest a goblin damned. This scene deservedly attained with artists a success second only to that of Fuseli’s “Nightmare.”7↤ 7 Schiff I, 145-46.

Perhaps because he despaired of excelling Fuseli in this scene, Blake selected for his representations the subsequent scene (I.v) instead. Although it does not lend itself to as much movement, it provides even more concentration of figures and allows as much terror.

Blake’s sketch of the Ghost’s appearance to Hamlet, here evidently first reproduced (see illustration 2), has been generally overlooked by Blake 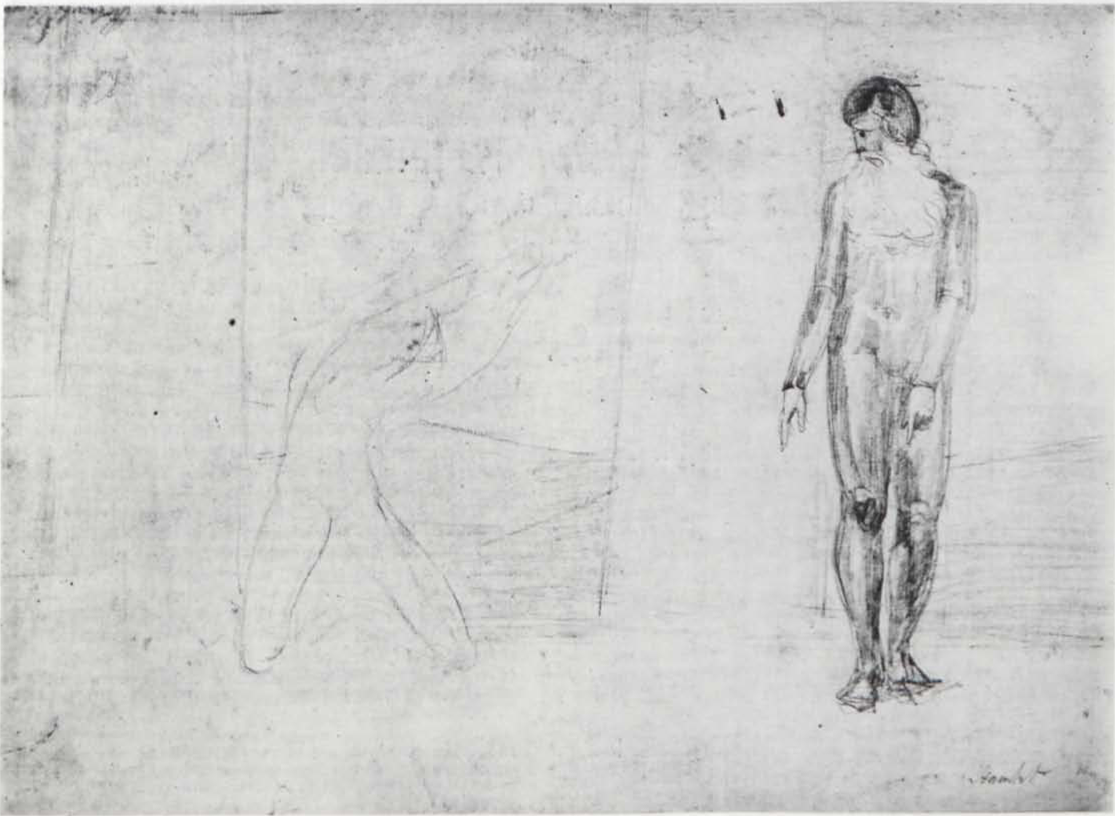 2 Blake’s sketch of the Ghost’s appearance to Hamlet (unfinished), 31 × 43 cm.
bibliographers.8↤ 8 Nor is it mentioned by W. Moelwyn Merchant in his informative “Blake’s Shakespeare,” in Apollo 79 (April, 1964), 318-24; reprinted in The Visionary Hand, ed. Robert N. Essick (Los Angeles: Hennessey and Ingalls, 1973), pp. 233-52. An unfinished pen and ink dilute India wash over pencil, it measures approximately 31 × 43 cm., on laid, undated Whatman paper. The verso of a scene from Robinson Crusoe, it has been in the collections of Admiral Popham and Samuel Timmins; it is now in the Birmingham Museum and Art Gallery. The sketch differs markedly from the finished 1806 watercolor (an extra-illustration for a copy of the Shakespeare second folio) in the British Museum (see illustration 3). It does so particularly in shape, background, the appearance of the figures, and their relationship. Since the finished watercolor is vertical in design, the two figures are naturally closer together than in the horizontal sketch; there they are separated by a massive pillar. In the watercolor the mysterious moonlit background is made effective by a less localized foreground. The two figures seem to be placed on the shore of Fuseli’s vexed sea. In the sketch the heavy pillars suggest a stronghold beyond which we see only a slightly sketched, generalized background devoid of mystery. Though the watercolor seems superior to the sketch in these regards, the sketch seems at least equal to the watercolor begin page 119 | ↑ back to top in its presentation of the two figures. In the sketch the Ghost is given the traditional luxuriant beard balanced below by thick calves and thighs; the watercolor replaces this corporeal figure with a comparatively wraithlike one. In both versions, however, the massive armor of Fuseli is replaced by armor which fits tightly and suggests, following Shakespeare’s lines (I.v. 11-20), far more of the Ghost’s corporeality. More important, the Ghost in the sketch appears much more sorrowful, more pitiably tormented than does the watercolor Ghost, who, like Fuseli’s, appears threatening, even accusatory, with piercing eyes and rather stiff body. The Hamlet of the sketch is almost featureless; but his wildly violent gesture toward the Ghost suggests an even more violent emotion than Blake first intended: originally, perhaps following Fuseli, Blake had Hamlet stretch his right hand just above the center of his body. In the watercolor Hamlet’s slightly raised hands follow the pattern set by Benjamin Wilson. Fear of the frightful apparition has set Hamlet’s hair on end (Cf. I.v. 18-20), yet one misses the unrestrained emotional abandon which characterizes the sketch. Here, even more than in the watercolor, Blake equalled the intensity of Fuseli. 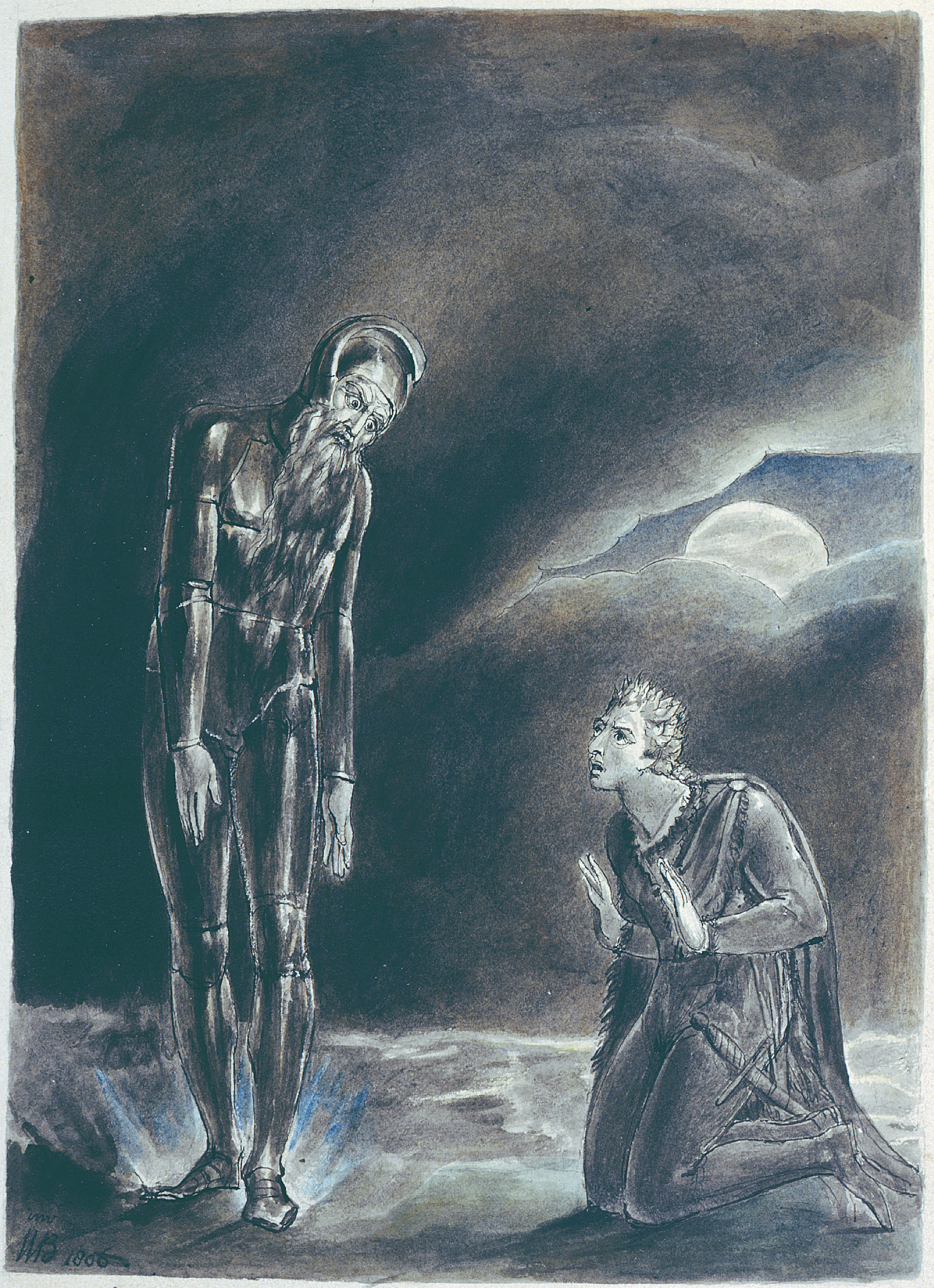 3 Blake’s 1806 watercolor of the Ghost’s appearance to Hamlet.