AN ILLUSTRATION TO ROBERT BAGE

The Blake exhibition at the Tate, and the happy coincidence of a BBC Radio 4 serial, produced one discovery of interest, the subject of the hitherto unidentified book illustration in the Bateson Collection.1↤ 1 Exh. Tate Gallery 1978 (255, repr.); also repr. Geoffrey Keynes, A Bibliography of William Blake, 1921, pl. 25. It is No. 682 in my detailed catalogue of Blake’s works, now in the press. In the “Times Diary” in The Times for 25 May 1978 it was reported that Professor Noel McLachlan of Melbourne University had recognized the drawing as being an illustration to Robert Bage’s Hermsprong, or Man as He is Not, first published in 1796 and again in 1799, 1809, 1810 and 1828. The novel, subtitled to contrast it to Bage’s previous novel Man as He is of 1792, deals with the opposition between Lord Grondale and the radical Mr. Hermsprong, brought up in savage America and a reader of Thomas Paine’s Rights of Man; he is only revealed at the close to be Charles Campinet, the wrongfully disinherited heir of Lord Grondale’s elder brother.

The drawing shows the encounter in chapter 5 between Lord Grondale and Hermsprong following the latter’s rescue of Lord Grondale’s daughter Caroline Campinet and her aunt Mrs. Merrick from being nearly “smashed to pieces down Lippen Crag” after the horse pulling their “chair,” a form of light chaise, had bolted. Lord Grondale, who has not yet learned of the near accident, is highly angry to find his niece “leaning on the bosom of a young man. . . . Yet he did not knock the stranger down—he did not. He only said, with the air of a great and angry man, ‘Who are you, Sir?’” To this Hermsprong, a “well dressed young man,” replies at first with silence, then with “I am a man, sir.” When asked his rank and fortune he replies, “ . . . As to rank,—I have been taught only to distinguish men by virtue,” a sentiment that would have appealed to Blake. Behind, Mrs. Merrick sits in the chair, still dazed “with open eyes, which seemed not to see,” while the servant Philip holds the horse’s head. Blake has shown the setting, “a steep declivity” running down to the river Gron by which stands the village of Grondale; it is “a 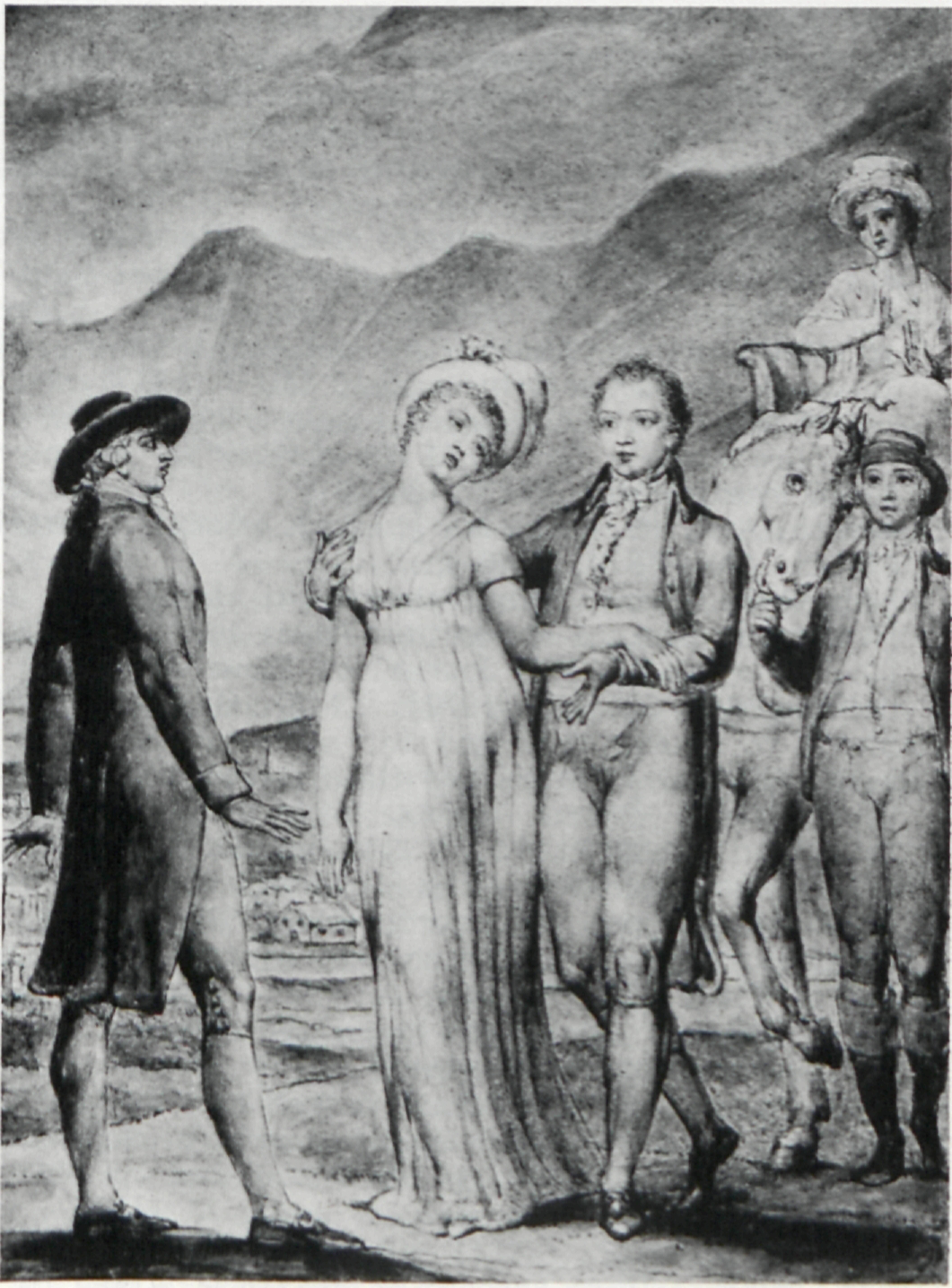 William Blake, Illustration to Robert Bage’s Hermsprong, c. 1820.   Pen and wash. Bateson Collection, on loan to the Tate Gallery, London.
fine autumnal evening.” The drawing, which is in monochrome pen and sepia and measures 6 ⅜ × 4 9/16 ins. (16.3 × 11.6 cm.), is close in style to Blake’s illustrations to Milton’s L’Allegro and Il Penseroso which are on paper watermarked 1816 and may indeed date from even later, say c. 1820. It is just possible, allowing for the fact that the book illustration is even more accomplished in Blake’s late, sensuous manner than the Milton illustrations, that it may have been done in connection with the 1828 edition of Hermsprong, which has a vignette frontispiece by T. Williams showing the same episode. Blake’s more ambitious design could have been abandoned as unsuitable or as the result of his death in 1827. However, there is no documentary evidence for Blake’s connection with this edition. (I am indebted to Professor McLachlan and Judy Egerton for this identification and much of its elaboration respectively.)