The Huntington Library is known the world over for its great collection of books, for its splendid eighteenth century paintings, and for its lovely gardens. It now seems also to be the place for discovering previously unknown drawings by William Blake. In 1982 a pencil sketch of Blake’s “Pestilence” was discovered in a group of uncatalogued drawings which apparently had been languishing in the Library’s rare book stacks for many years.1↤ 1 See Shelley M. Bennett, “A Newly Discovered Blake in the Huntington,” Huntington Calendar (July-August 1983), 2-4; and Bennett, “A Newly Discovered Blake at the Huntington,” Blake/An Illustrated Quarterly 18 (1984-85), 132-39. Recently, yet another Blake drawing has come to light.

Since December 1916, the Huntington Art Gallery has owned an important pencil sketch for Blake’s Dante Illustrations, “The Six-Footed Serpent Attacking Agnolo Brunelleschi.”2↤ 2 C.H. Collins Baker, Catalogue of William Blake’s Drawings and Paintings in the Huntington Library, revised edition by R. R. Wark (San Marino: Huntington Library, 1957), p. 46, pl. xxxvi; Martin Butlin, The Paintings and Drawings of William Blake (New Haven: Yale Univ. Press, 1981), No. 822, pl. 1073 (hereafter cited as “Butlin No. —”). This somewhat rubbed and stained yet powerful drawing has long been firmly pasted down on all four edges to its backing mat, probably supplied by A.S.W. Rosenbach, the great book dealer from whom Henry E. Huntington acquired this and many other Blake materials.3↤ 3 To the provenance information supplied by Butlin, No. 822, I can add that this drawing is very probably the design for “Dante’s ‘Inferno’ ” offered for sale in Rosenbach’s catalogue 18 of 1916, Catalogue of A Remarkable Collection of Rare and Choice Books Manuscripts and Autograph Letters, item 17, with a collection of other works by Blake including the Thomas set of Comus designs for $29,000. This entire group was acquired by Henry Huntington in December 1916 for $17,200 (according to Rosenbach’s receipt of 1 January 1917 in the Huntington Archives). I am grateful to Robert N. Essick, who is now completing a new catalogue of all original Blake materials at the Huntington, for this information. Late in December of 1984, Carol Verheyen, the Preparator/Registrar for the Huntington Art Collections, decided that the preservation of the drawing required its removal from the highly acidic mat board. As soon as the operation was completed, she found on the verso a pencil sketch of a standing woman (illus. 1) near the left margin of the sheet. The figure may be holding something in her right hand, but stains in the paper and some abrasion obscure this area. The verso also bears the number “8/16” in pencil—perhaps a price or other notation made by a dealer.

The basic features of the woman’s anatomy, the slightly contrapposto stance with her head in profile but her body twisting towards us, and the qualities of the draftsmanship are all representative of Blake’s work. The hesitancy and sketchiness of the lines, while hardly indicative of Blake’s theories about firm and determinate bounding lines, are nonetheless typical of his drawing style late in his life. In his description of a stylistically similar work, a “sketch, probably for ‘Bunyan’s Dream,’ ” (Butlin No. 830), Butlin has nicely characterized this technique as one “in which a multitude of lightly sketched lines gradually picks out the main forms.”4↤ 4 Butlin, William Blake, catalogue of the Tate Gallery exhibition (London, 1978), p. 147. In correspondence, Butlin has accepted the newly discovered drawing as Blake’s work. Several of the Dante drawings left at an early stage of development (e.g., Butlin Nos. 812.68, 812.70, 812.71, 812.83, 812.100) also exemplify this method. Thus all features of the newly discovered drawing, including of course its presence on the verso of a known work by Blake, indicate that it too is from Blake’s hand. It was probably sketched in the period when Blake was working on the Dante designs, ca. 1824-1827.

There are a good many females in Blake’s art generally similar to the Huntington sketch, but none that I can find is identical. The drawing has all the qualities of a preliminary design, and the first possibility that springs to mind is that it relates to one of the large Dante watercolors. Martin Butlin has suggested in correspondence that the Huntington drawing is an early version of the figure second from the left margin in “Beatrice Addressing Dante from the Car” (illus. 2). If this is indeed the case, then it seems likely that this verso drawing was executed prior to the composition on its recto (“The Six-Footed Serpent Attacking Agnolo Brunelleschi”) because the latter is probably a preliminary drawing for the engraving of 1826-1827 rather than for the slightly earlier watercolor.5↤ 5 As Butlin points out under his No. 822, the Huntington recto drawing, which he dates to 1826-1827. 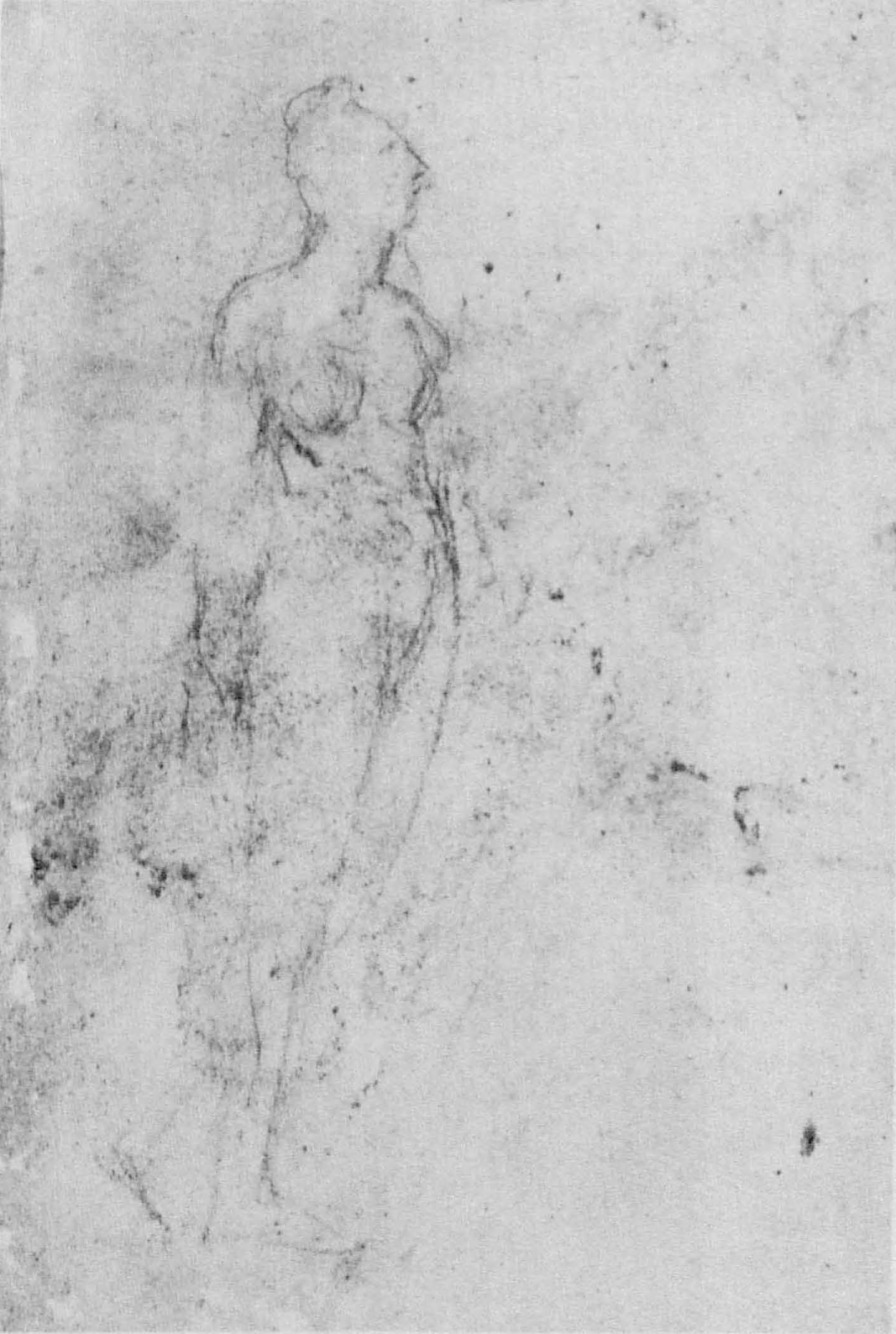 The woman in the newly revealed verso sketch and the much more highly finished figure in “Beatrice Addressing Dante” have similar feet and leg positions, torsos, and extended right arms. Indeed, the two women are about the same size and are similarly situated in relationship to the edges of the sheets of paper on which they appear, suggesting that even in the sketch Blake was thinking about the location of his figure within a larger design. However, the head positions and hair of these two women are very different, and the left arm of the sketched woman is not shown. Actually, the head in profile with the face turned slightly upward and the coiffure with hair piled up on top of the head associate the pencil drawing with the central figure (second from the right) who looks toward Beatrice standing on the chariot. It seems as though Blake has made use of the preliminary figure by dividing her characteristics between two women in the finished composition. While the newly discovered drawing is far from being a major work, it does provide some interesting insights into Blake’s methods of developing a composition as he moved from first thoughts on paper to a highly wrought watercolor design.